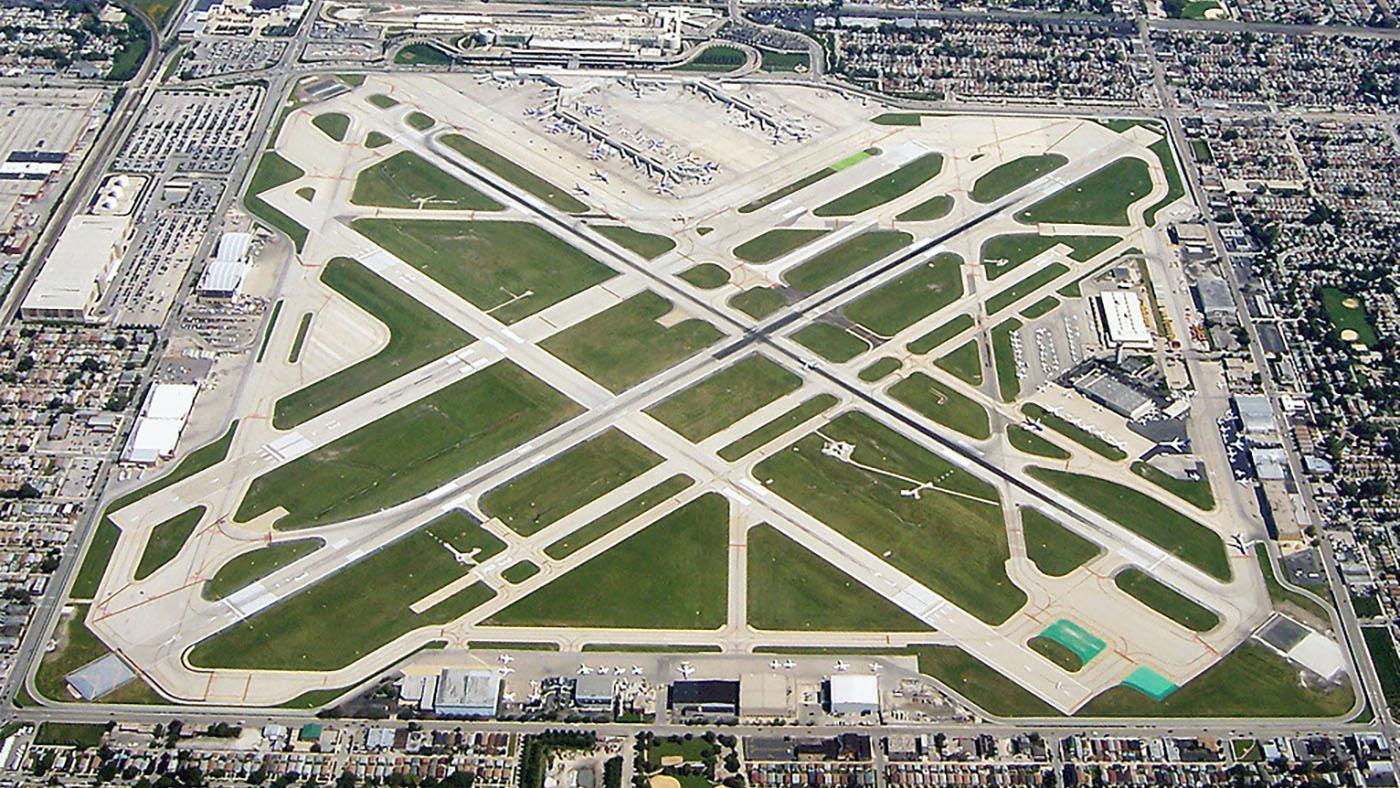 In the decades before O’Hare International Airport opened, Midway was the world’s busiest airport. Today, as both of Chicago’s airports look toward the future, here’s a look at the ups and downs of Midway’s past.

When Midway opened as Chicago Municipal Airport in 1926, air travel was a rare but fascinating thing. (Charles Lindbergh didn’t complete the first solo transatlantic flight until the following year.) Private airplanes and aircraft carrying mail were among the first planes to use it, taking off from a patch of land leased from the Chicago Board of Education just eight miles southwest of downtown.

Two years later, the airport had twelve hangars and four runways. People put on their finest clothes, packed their picnic baskets, and made a day of watching the planes take off and land. The best views of the comings and goings of airplanes, however, was from the vantage point of the students at Nathan Hale School, whose walls sat just 100 yards from the edge of the runways. The school’s windows and chalk rattled as planes made their approach overhead. The school building was eventually closed in 1955 due to obvious concerns for student safety.

As air travel began to expand and some recreational passenger flights started taking off, Chicago served as a natural hub and refueling point for planes which required far more fuel stops than they do today. In 1931, the first passenger terminal opened, and quickly filled with those eager to experience the thrill of flying. In 1947, another terminal opened to meet the demand, and the airport became the world’s busiest. Two years later, the airport was renamed to commemorate the Battle of Midway, a naval air battle over the Pacific during World War II.

With Midway’s reputation as an exciting air travel hub firmly established, the surrounding neighborhood developed, too. Though Nathan Hale School had closed, houses popped up just beyond the runway, adding another challenge for the pilots who had to make precise landings. But as air travel became routine around the country, the city recognized the need for more airport sites. 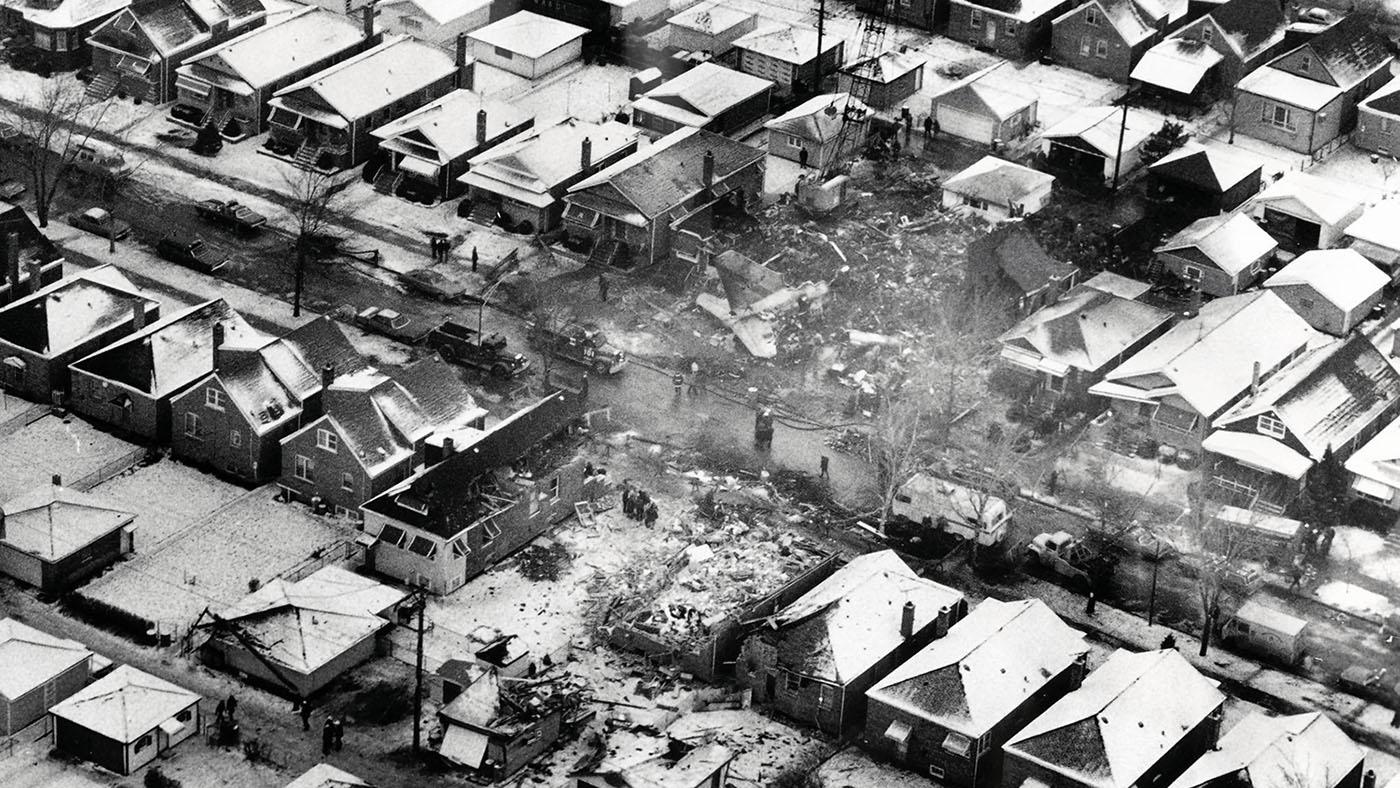 In 1955, passenger service began at O’Hare Airport, a military airport that had been renamed from Orchard Field Airport for Edward “Butch” O’Hare, a naval pilot and decorated World War II hero. Airlines continued to focus their resources on Midway until 1960, when what would later be named the Kennedy Expressway opened, providing direct access from O’Hare to downtown Chicago. Airlines weren’t interested in maintaining facilities at two airports in Chicago and began to shift operations to O’Hare. The advent of the jet airliner added to Midway’s woes, as it required longer runways than Midway had at the time. O’Hare quickly stole the title of world’s busiest airport, and fewer and fewer flights came into Midway. By the mid-1960s, Midway was a virtual ghost town.

Then, tragedy struck. On December 8, 1972, a 737 United Airlines passenger jet from Washington, D.C., crashed into a home on 70th Place near Marquette Park. The crash killed two women on the ground and 43 people on board, including an Illinois congressman and the wife of a Watergate conspirator. Her presence and the $10,000 cash in her purse fueled conspiracy theories that the crash was connected to Watergate. The cause of the accident was ruled to be pilot error, as the plane missed its first approach and was attempting its second when it crashed.

In the two decades after the crash, Midway mounted a comeback. In the 1980s, budget airline carriers like Southwest started adding service to Midway. This, combined with the construction of the CTA Orange Line to the airport in 1993, brought more travelers back to the terminals.

Between O’Hare and Midway, roughly 100 million travelers pass through Chicago’s airports today. Several dozen airlines operate out of O’Hare, while Midway houses Southwest, Delta, Porter, and Volaris. O’Hare is planning a large improvement project, including a new global terminal designed by Jeanne Gang’s Studio Gang architecture firm that is anticipated to open in 2028. For decades, there has also been some talk about opening an airport in the south suburbs, though opponents say it’s not needed.

The Midway Modernization Program seeks to improve and renovate parts of Midway, including an expanded parking garage and security checkpoint, as well as new dining and shopping options. These projects are expected to be completed by 2020, 94 years after the first airplanes took off from Midway.