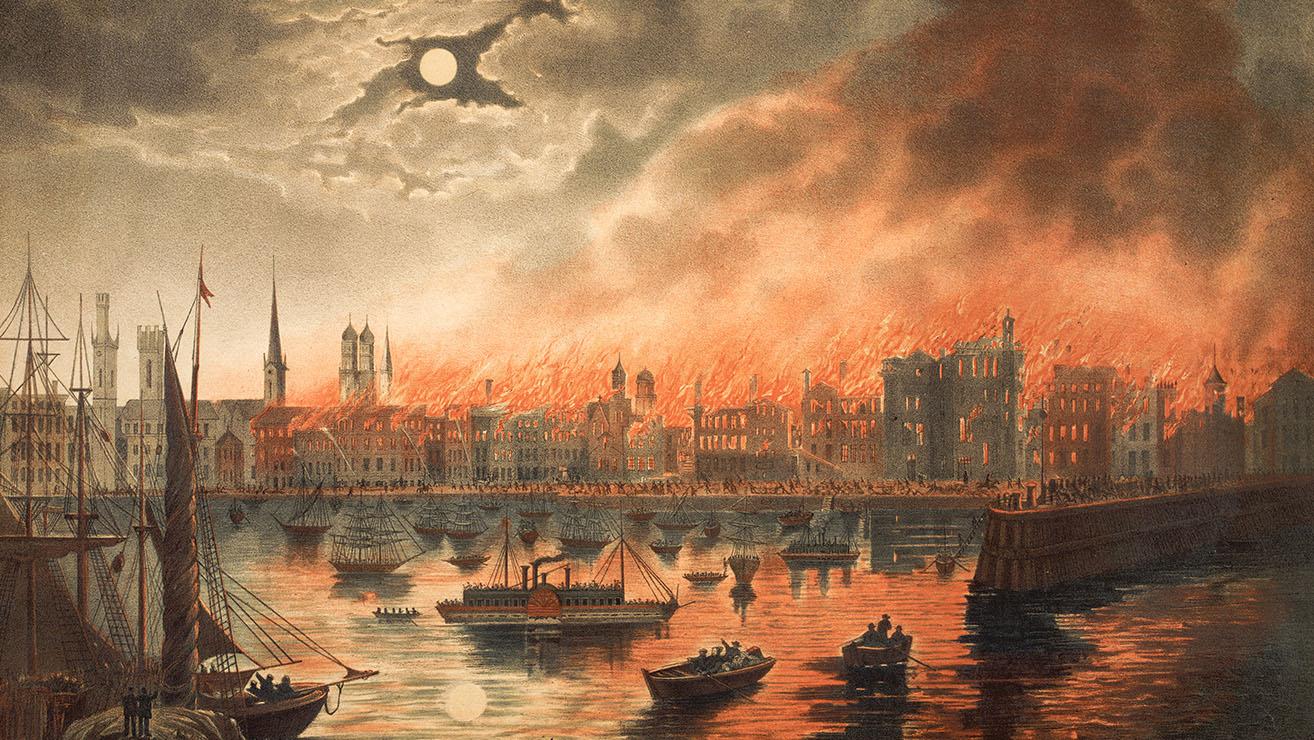 The Chicago Fire of 1871 destroyed much of the city over the course of three days. Image: Courtesy of the Chicago History Museum

The Great Chicago Fire: A Chicago Stories Special premieres Friday, October 9 at 8:00 pm and is available to stream. Learn more about the Fire at wttw.com/chicagofire.

For many Chicagoans, the story of the Great Chicago Fire of 1871 is a familiar one: a devastating blaze that destroyed the city, the resurrection of the city from the ashes. The Great Chicago Fire: A Chicago Stories Special, which revisits the fire, reveals new details with recreations and animation that bring the fire to life. The show narrates the Fire through the lens of three people: Irish immigrant Catherine O’Leary, who was wrongly accused of starting the fire; Chicago Tribune publisher William Bross; and head custodian of the Board of Trade, Joseph Hudlin, a former slave who became a hero. Executive producer Dan Protess and producer and writer Peter Marks talked about their approach to telling the old story in a new way.

The story of the Great Chicago Fire is 149 years old. What are some of the challenges in telling a story that happened so long ago?

Peter Marks: It is the seminal event in Chicago history. The challenges are, how do you tell a story that has no pictures? There are no pictures that exist from during the fire itself. Nobody's ever found any of those. You have mostly illustrations, mostly black and white, some that were later colorized. The other challenge is that the story has been done. So how do you tell the story with a fresh angle?

Dan Protess: That was one way in which Peter rose to the occasion. Especially in editing in places where I would have been perfectly happy just seeing a painting of the fire, Peter kept insisting, “No, I want to feel the fire.” And I think that's important, because we have a tendency when we think of these historical events to have a waxy nostalgia about them, and almost see them in our memories as black-and-white events. But we forget that for the people living through the fire, this was awful.

The show explores the fire through the lens of three individuals: Catherine O’Leary, Joseph Hudlin, and William Bross. Why did you choose these three people?

Marks: We wanted to have somebody who left behind a record of what happened so we could have a first-person perspectiveand hear their words and hear what they had to say. We wanted to get a cross-section of society and different social rungs.

Protess: I always try to tell any story from a human perspective. We're humans as producers. Our viewers are humans. We're all more likely to find an interest in a story when we see historical events through the eyes of humans like us.

The show examines certain myths and local legends. The most pervasive myth was that Catherine O'Leary's cow kicked over a lantern and started the fire. Why was it important to dispel that?

Marks: It is the greatest myth about the fire. If you talk about the Great Chicago Fire, everyone thinks that it was Mrs. O'Leary, the cow, and the lantern. There's an interviewee who says that these myths are like seeds, and they start to grow and it's impossible to stop them. It was really wonderful to have Mrs. O’Leary’s descendant, Nancy Connolly, on the program. She provided a wonderful perspective and an emotional core about the suffering of her relative, and provided some humanity to the fire and what happened afterwards.

Protess: Blaming the Chicago Fire on Catherine O'Leary was heaping a tragedy upon a tragedy. Not only did we lose our city, but we continued to perpetuate this lie that this woman was responsible for more than a century. And it's a story that we all grew up with, especially those of us who grew up in Chicago. So it's not dispelling some obscure myth. It's dispelling a myth that we all grew up with.

In researching or doing interviews, did you personally learn anything new or discover any details that surprised you?

Marks: One thing I didn't realize was that immediately after the fire, the city was rebuilt exactly like it looked before. In those three years after the fire, you wouldn't have known it was a different city. There was another fire in 1874, and luckily the whole city didn't burn down, but it's after that when the city starts to transform and change, so that a decade later you get people like Louis Sullivan and other architects who transform the face of the city coming to Chicago .

Protess: Working on this definitely clarified some of the chronology for me. I would think that a lot of people in our audience probably assume that this was an event that unfolded over a few hours, but it actually happened over the course of three days. What if you were a North Sider, and there's a fire all the way on the Southwest Side of the city? There's no television news or internet to tell you what's happening, but maybe you see some distant smoke. It is so far away from you at that point that the idea that this fire would reach your home on the North Side had to be unbelievable.

What do you hope people will take away from the show?

Marks: I hope it does provide some type of hope during this time of crisis in the world, that we do look back and history provides a lesson that people find a way. Chicagoans have found a way to flex their muscles and pick themselves up and carry on.

Protess: I hope the recreations and the animations make people feel the fire and give them a sense of what it must have been like to live through it. But more than anything else, I hope they see the many ways in which this story resonates with the present. Chicago, then as now, was a city that was really divided by race, ethnicity, and class. People across the socioeconomic spectrum did not experience the fire equally, the same way that we're not experiencing the COVID-19 pandemic equally.