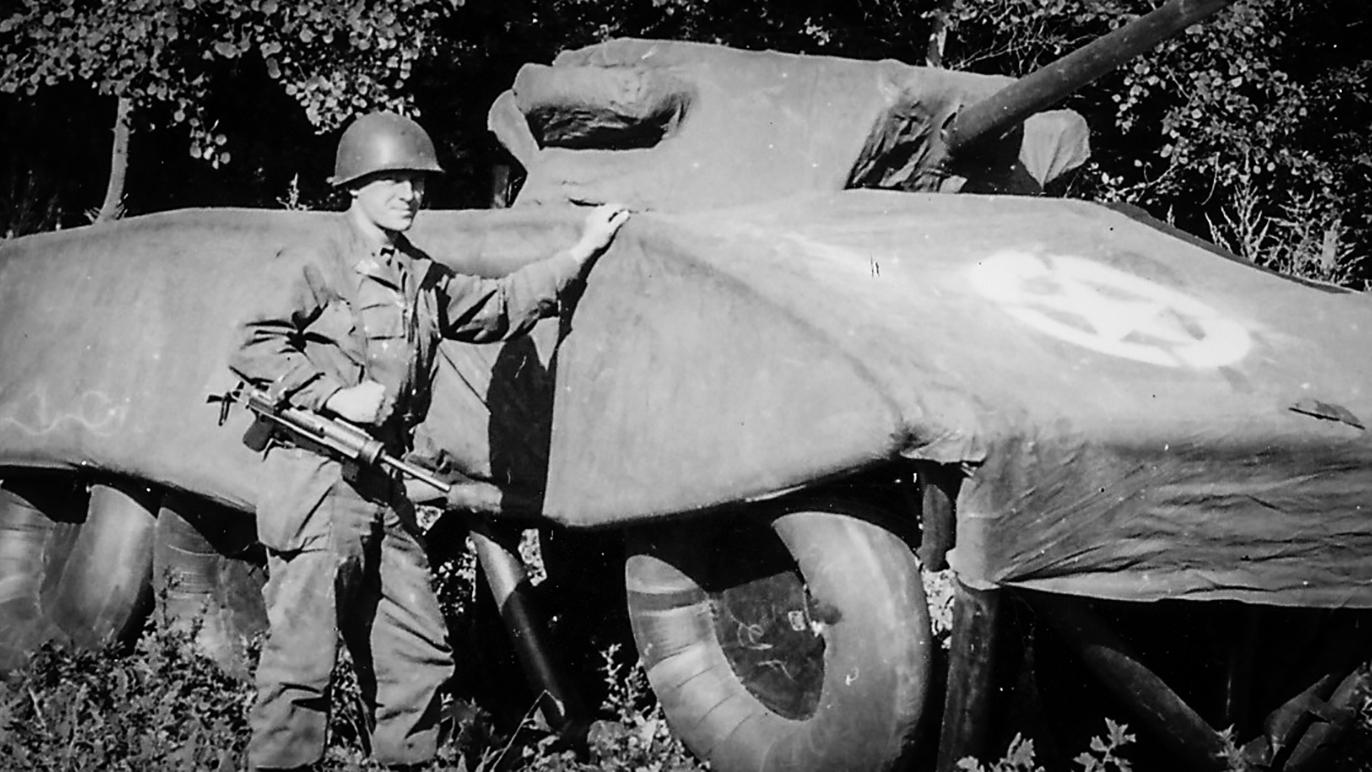 The U.S. and The Holocaust by Ken Burns, Lynn Novick, and Sarah Botstein premieres on September 18 at 7:00 pm on WTTW. Stream it and find more stories at wttw.com/holocaust.

When the United States army sought to deceive German forces during World War II, it turned to an unlikely group: artists. A unit of high-stakes “con artists” played an important role in the Allied victory, and they are the subject of an ongoing exhibition at the Illinois Holocaust Museum & Education Center in north suburban Skokie.

The 23rd Headquarters Special Troops, also known as the “Ghost Army,” was a unit of over 1,000 men who used their skills as artists and engineers to create inflatable tanks and weaponry, fake radio calls, and sound effects to confuse Hitler’s army about the location and movement of U.S. forces.

Author and filmmaker Rick Beyer, who produced a 2013 PBS documentary about the Ghost Army and worked with the Illinois Holocaust Museum on the exhibition, says that when he first started telling this story, people didn’t believe him.

“I’d have conversations with people who would say … ‘Is that a fictional story? Is it made up?’ No, it’s a real story,” Beyer says.

It begins in 1944, when the U.S. Army formed the unit. Many of its men were artists who had been recruited from the country’s top art schools in New York, Chicago, and Philadelphia to form an earlier unit that was tasked with camouflaging headquarters and other buildings. A few of the men in the Ghost Army were Jewish men who had fled Germany and survived the Holocaust.

“They just grabbed this camouflage unit and said, ‘Okay, you're not doing camouflage anymore. You're going to be doing this visual deception.’” The soldiers for the Ghost Army arrived in Europe a few weeks before D-Day.

“We have memos from [General Eisenhower] trying to get them to get this unit to England in time to be able to put them into action right after the invasion,” Beyer says. “It's developed by the U.S. Army to give them an extra advantage once they are fighting in Europe.”

The unit carried out 22 battlefield deceptions between when they arrived and when they were disbanded the following March. Never armed with more than .50 caliber machine guns, the unit used what Beyer calls “multimedia”—visual, sonic, and radio—deception to trick German soldiers.

Inflatable vehicles, artillery, and other important weapons or buildings were a big part of the visual deception—“all the things that you would need to fool enemy aerial reconnaissance, or somebody watching from a distant church tower,” Beyer explains. They had specific inflatables for any kind of vehicle or weapon an infantry or armored division might have.

So what did these “inflatables” look like? Beyer says the tanks, for example, were constructed with a kind of inflatable tubing—a frame, essentially, over which a painted rubber canvas was draped.

“They're pretty realistic-looking from a few hundred yards away,” Beyer says. “Though they don't look realistic if you're standing 50 feet away.”

But the Ghost Army had to sell the story with more than just inflatables. For instance, what follows a tank?

“You better put in tank tracks in the ground because aerial reconnaissance sees a bunch of tanks,” Beyer says. Soldiers would take bulldozers under the cover of night to lay down fake tracks. There would be phony radio traffic, and fake sounds, the rumble of vehicles on the move—all things the Ghost Army faked to trick anyone who might be watching.

“I think that's really kind of the secret sauce of the Ghost Army,” Beyer says of the multimedia elements. “It was basically trying to put on a show for the enemy.” 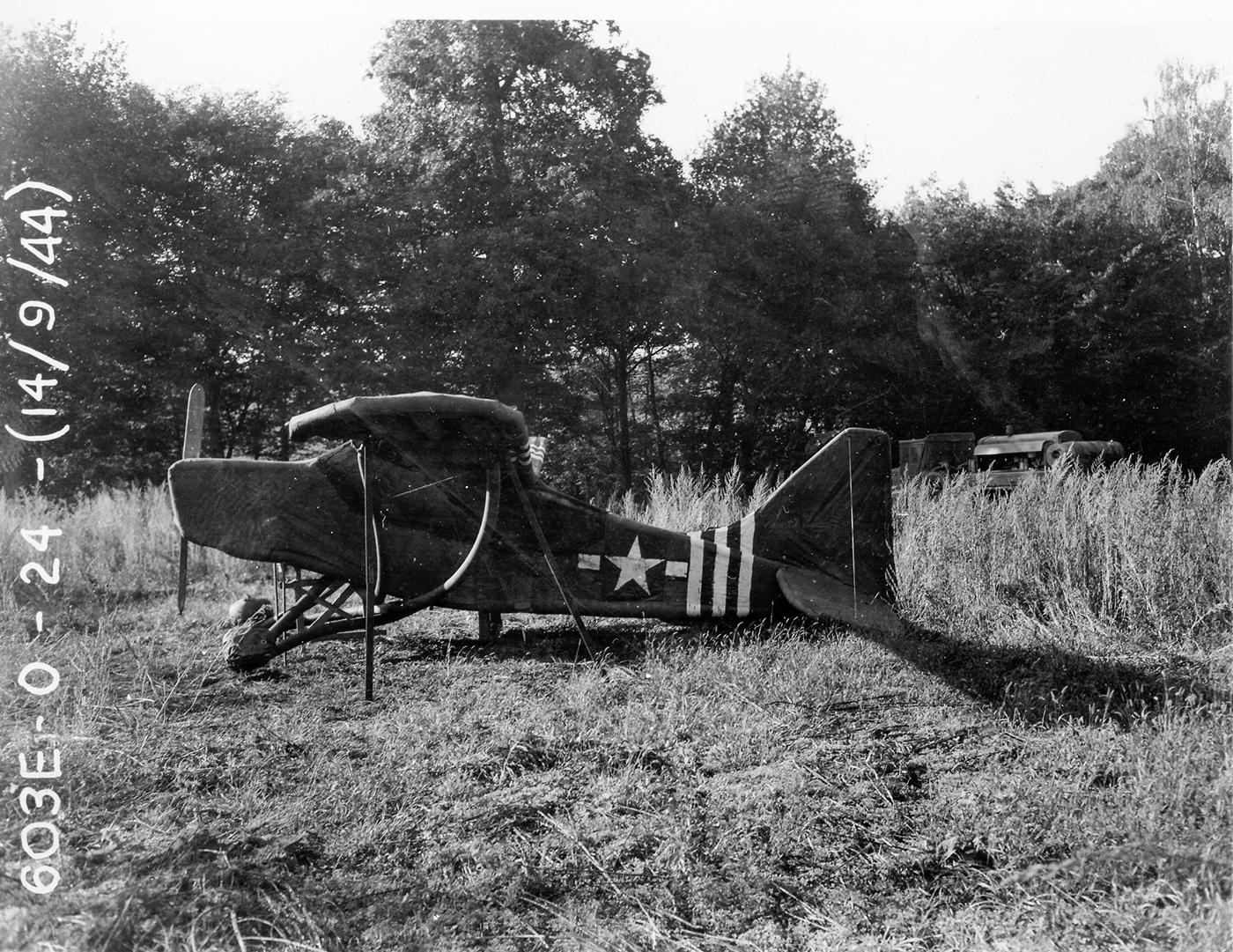 While not every deception fooled the Germans, there were a few that were very successful, says Beyer. During one operation, the U.S. army was advancing on the French city of Metz. There was a gap in the frontline, and the Ghost Army was called upon to cover it.

“For a week or so, George Patton’s flank is being protected by two rubber tanks and guys with sound effects,” Beyer says.

Beyond their contribution to the Allied victory in Europe, the Ghost Army also produced an artistic record of the war.

“They’re documenting the experience that they’re having—the kind of towns that they’re going through, the children they meet. They’re painting each other, their barracks, and stuff like that. It’s an amazing window to the war,” Beyer says.

When they weren’t using their skills to trick the enemy, the men found time to practice their craft in their downtime.

“In a barracks building in France in the attic, they found some space and they put on an art show so that they could show off their art to each other,” Beyer says. “One of the soldiers … said, ‘We were sleeping in hedgerows and foxholes, but nothing would get in the way of making a good watercolor.’”

After the war, many of the men went on to be well-regarded artists. Minimalist painter and sculptor Ellsworth Kelly, fashion designer Bill Blass, wildlife painter Arthur Singer, and Chicago-area muralist and stained glass artist Italo Botti were all in the Ghost Army.

The work of the Ghost Army was classified until 1996, which is one of the main reasons, Beyer says, that it isn’t a story that is often told. By the time the Ghost Army’s exploits were declassified, many stories about World War II and what led to the Allied victory had already made their way into the American zeitgeist.

“There was this accepted narrative of what happened in World War II, and this simply wasn't part of that story,” Beyer says. “ I also think it's just so strange, because it's literally so unbelievable.”

Beyer says there are some estimates that the Ghost Army saved anywhere from 5,000-15,000 lives.

“It’s hard to know, but clearly they saved lives, and clearly they helped achieve victory at a somewhat lower cost than it would have been achieved otherwise,” Beyer says. “It’s an investment in art performance that yields lives saved.”

Ken Burns
The U.S. and the Holocaust