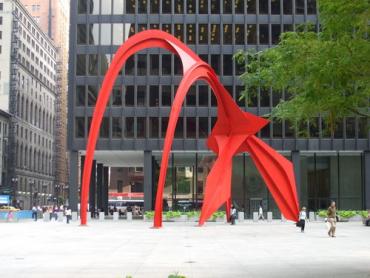 In 1978, the Chicago City Council passed the progressive Percent-for-Art Ordinance, giving birth to the city’s robust public art program. The ordinance ensured a small percentage of the construction and renovation costs for municipal buildings would be earmarked for the purchase of original artwork. At least half of the commissions were given to regional artists, stimulating the local art market and giving greater visibility to artists whose work could be viewed outside of galleries and museums.

The Fine Arts Council, in collaboration with the city architect, commissioned or purchased hundreds of pieces for display in buildings or in public plazas. The art became part of the fabric of the city. Some of the city’s most notable touchstones were dedicated during the ’70s and ’80s, including Dubuffet’s Monument with Standing Beast, Oldenburg’s Batcolumn, Calder’s Flamingo, Chagall’s Four Seasons, and Miró's Chicago. The James R. Thompson Center houses the largest permanent public art collection in Chicago.

Ten years after the passing of the ordinance, a new bill was introduced and ratified in 1987 that increased the percentage from 1.00 to 1.33.