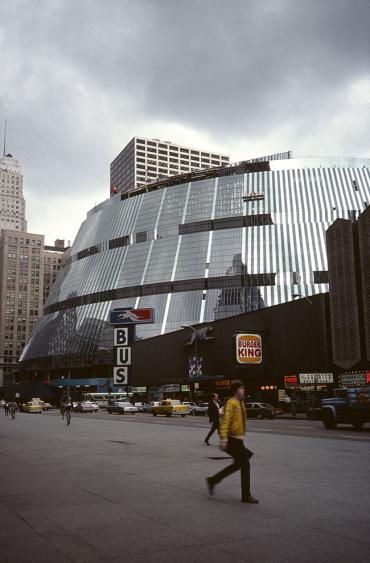 Chicago is home to a number of architectural gems, and the buildings added to the skyline in the ’70s and ’80s were no exception. The dazzling James R. Thompson Center with its sloping glass façade, asymmetric design, and colorful palette serves as one of Chicago’s finest examples of postmodern architecture.

Completed in 1985 and originally named the State of Illinois Center, the JRTC debuted to mixed reviews. Art critic Mark Caro wrote, “In a cityscape long associated with the flat, black façades of architect Ludwig Mies van der Rohe, the arrival of Helmut Jahn's State of Illinois Center was akin to Carmen Miranda crashing a black-tie ball.” This innovative building was a refreshing challenge to Chicagoans’ understanding of their city’s architecture.

The building sparked controversy not only for its bold employment of steel and glass, but because it was exclusively funded by taxpayer dollars. Ironically, the center was intended to be a monument to “open government in action” but construction costs well exceeded the budget of $85 million and taxpayers were stuck holding a bill of nearly twice that.

Whether you’re a fan of the exterior or not, the Thompson Center’s interior is certainly brimming with eye candy. From the kaleidoscopic atrium to the permanent art collection featured on all 17 floors – the effects can be pleasantly dizzying. Jean Dubuffet’s fiberglass sculpture, Monument with Standing Beast, also a part of the city’s public art collection, was dedicated in 1984 and rests in the plaza on Randolph Street.

The firm Murphy/Jahn designed a number of Chicago’s important structures in the ’80s including the Xerox Centre, an addition to the Chicago Board of Trade, and the celebrated United Airlines terminal at O'Hare International Airport.