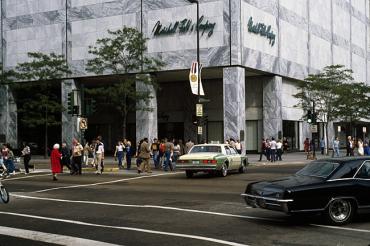 When Water Tower Place arrived on the Magnificent Mile in 1975, it was the first indoor mall in the city. It wanted to be a shopping center impervious to weather, just like its popular suburban counterparts, but replete with cosmopolitan elegance. The 74-story skyscraper included offices, condos, and high-end stores catering to fine and expensive tastes. Marshall Field opened a store in the glossy new building, seemingly more upscale than its sister store on State Street. While ascending in the glass elevator of Water Tower Place, you had the impression that you had gone up in the world, and Water Tower Place became one of Chicagoland’s favorite shopping destinations.