A Brief Timeline of U.S.-Cuba Relations 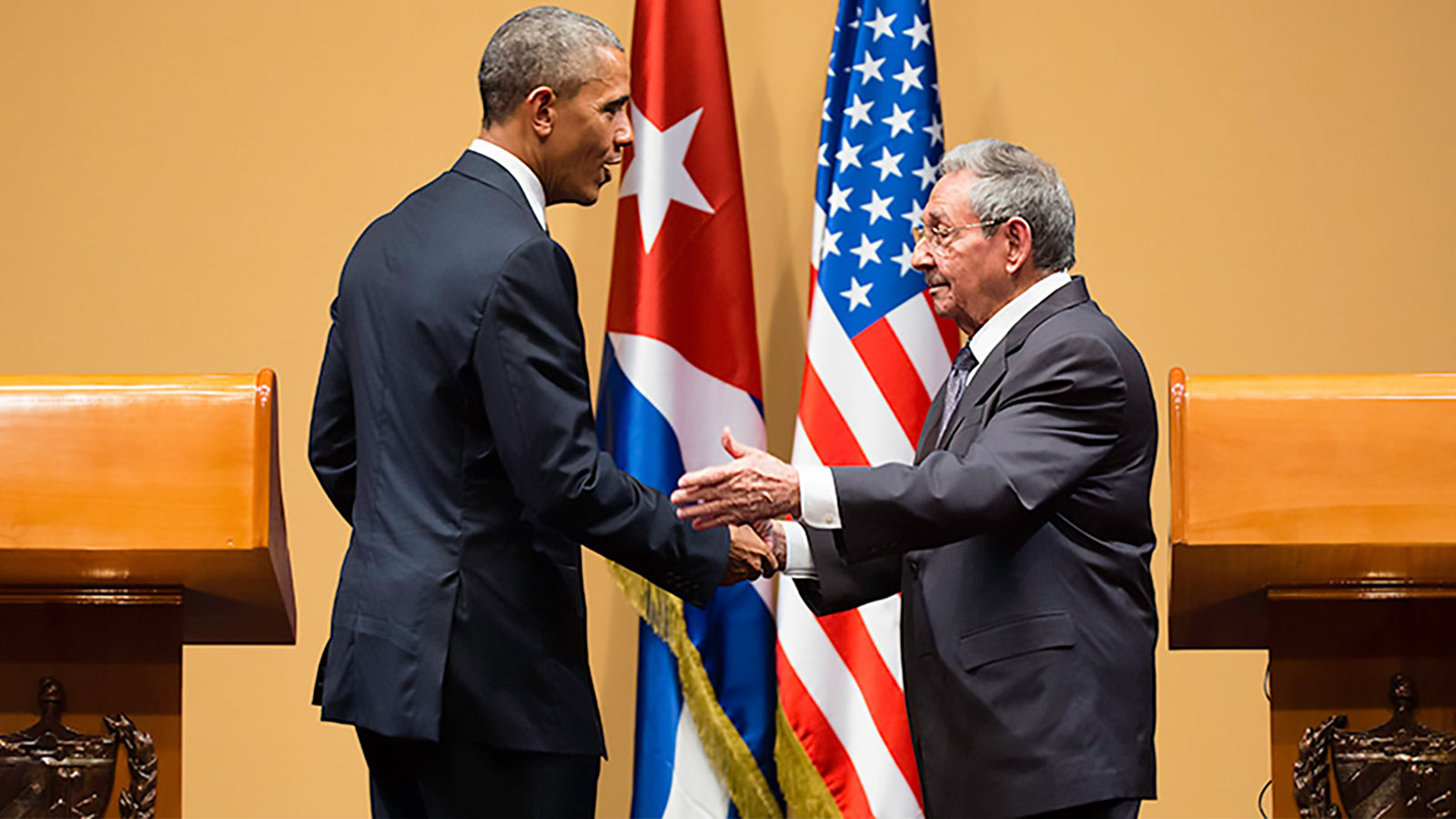 A Brief Timeline of U.S.-Cuba Relations

After more than a half century of hostility, U.S.-Cuban relations are once again in a state of flux.

“It’s always very interesting to work on this relationship,” American Chargé d’Affaires Jeffrey DeLaurentis told WTTW’s Geoffrey Baer during his recent trip to Havana. “It’s a very long and complicated road that we are on now again.”

After an embargo lasting a half century, it is easy to forget how close Cuba and the United States have been — economically, culturally, and politically — at different times in their long, shared history.

The economic ties between Cuba and its neighbor to the north predate the American Revolution. In those early colonial days, merchants traded in secret due to prohibitions placed on them by Britain and Spain.

Toward the second half of the nineteenth century, the growing movement for Cuban independence found many sympathizers in the U.S.

In 1898, with Cuba’s War of Independence in full swing, the U.S. sent a battleship — the USS Maine — to Havana Harbor to demonstrate support for U.S. citizens in Cuba and protect what were by then substantial U.S. business interests on the island. Weeks after its arrival a mysterious explosion killed more than 250 American sailors on board. Although Spain denied responsibility, American support for military intervention grew. Fewer than two months later, the Spanish-American War commenced.

The USS Maine in Havana Harbor, pictured in 1897 and again in 1900. Photos courtesy of the Detroit Publishing Co. and the Library of Congress.

After driving out the Spaniards, the U.S. occupied Cuba for a short time before pulling out its troops in 1901. The terms of that removal included the creation of a U.S. naval base at Guantánamo Bay, an ongoing right to intervene militarily if American interests were deemed threatened, and a prohibition on Cuba entering into treaties with other countries.

U.S. corporations, including the United Fruit Company, expanded their holdings in Cuba considerably during this period.

Americans flocked to Cuba during the Prohibition era, aided by Cuban-founded spirts company Bacardi ads encouraging them to “Leave the Dry Lands Behind.” Tourism to the island doubled in ten years, from 45,000 annual visitors in 1916 to 90,000 in 1926. U.S. companies and mob bosses like Meyer Lansky also profited from the growth, building casinos and lavish hotels such as the Riviera and Hotel Nacional.

Meanwhile, in the early ’30s, the U.S. supported a military coup led by Cuban Army Sergeant Fulgencio Batista in 1933. Subsequent power struggles ensued, but Batista maintained control for decades, whether as the duly elected leader or the strongman behind a succession of Cuban presidents. For decades, corruption reigned, the Cuban aristocracy thrived, the poor became destitute, and opposition was repressed.

In 1956, Marxist revolutionaries led by Fidel Castro and Ernesto “Che” Guevara launched an armed rebellion. Three years later, they marched into Havana with a guerilla army of 9,000, forcing Batista and his supporters to flee.

The U.S. denied asylum to Batista, with then-Senator John F. Kennedy declaring, "Our aid to his regime, and the ineptness of our policies, enabled Batista to invoke the name of the United States in support of his reign of terror."

Fidel Castro assumed the role of prime minister of Cuba. The son of a Spaniard who came to Cuba to fight against the U.S. in the Spanish-American War, Castro had come of age in a region dominated by U.S.-owned sugar mills. He appealed to a sense of nationalism among the Cuban people in part by blaming the country’s political and economic struggles on U.S. influence. “Cuba Sí, Yanquis No” remained his rallying cry for decades.

In April 1959, just months after assuming power, Castro traveled to New York and Washington D.C., where he met with journalists, spoke to the Council of Foreign Affairs, and visited Yankee Stadium. President Eisenhower declined to meet the new Cuban leader, instead sending his Vice-President Richard Nixon and acting Secretary of State Christian Herter.

In 1960, Castro angered the American and Cuban elite by nationalizing scores of private companies without compensation. The U.S. reacted by breaking off diplomatic ties with Cuba and imposing a trade embargo.

Castro and Guevara quickly consolidated power and stamped out their opposition, imprisoning and executing rivals.

In the early years after Castro’s revolution, over 100,000 Cubans left the island for the United States, with the largest concentration settling in Florida. These Cubans saw themselves as exiles from the Communist government and soon established a successful and politically influential community dedicated to opposing the regime.

For several decades, Cuban exiles in the U.S. fought the Castro regime through political pressure and, at times, acts of terrorism. There were assassination attempts, hijackings, and elaborate plots to overthrow the Castro regime — sometimes involving the U.S. government.

In April 1961, a small group of Cuban exiles, trained and equipped by the CIA, launched a botched invasion in the Bay of Pigs, an inlet located on the southern coast of Cuba. The incident became a diplomatic and military embarrassment for U.S. officials.

Two months later, Castro publicly declared himself a Marxist-Leninist, inviting the Soviet Union to enter into a closer relationship with the Cuban government.

In October 1962, U.S. spy planes photographed the Soviet Union building silos for nuclear missiles in Cuba, sparking the showdown known as the Cuban Missile Crisis. Nuclear war was narrowly averted when the Soviets turned back their ships and removed the missiles as part of a deal struck with the U.S., which, in turn, promised to withdraw its missiles from Turkey.

By 1965, Cuba had become a one-party Communist state, closely allied with and soon economically reliant upon the Soviet Union.

In 1967, Bolivian soldiers, with the help of U.S. Green Berets and the CIA, killed Ernesto “Che” Guevara in Bolivia.

In April 1980, a sharp downturn in the Cuban economy, coupled with aggressive efforts by many Cubans to seek asylum, led Castro to temporarily lift travel restrictions on boats leaving from the Port of Mariel, along Cuba’s northwest coast. Within two months, more than 100,000 Cuban exiles arrived on the shores of Florida, overwhelming the U.S. Coast Guard. Eventually, President Carter and the Castro regime agreed to limit the number of annual refugees allowed into the U.S.

Following the fall of its closest ally and patron, the Soviet Union, in the early 1990s, the Cuban economy collapsed. The Cuban people suffered widespread hunger and malnutrition caused by food shortages. The U.S. began allowing some private groups to deliver humanitarian aid to Cuba in the form of food and medicine. At the same time, Castro, for a brief period, declared that anyone wishing to leave Cuba was free to go. Once again, several thousand Cubans arrived in Florida.

In 1995, President Bill Clinton stemmed the tide of Cubans arriving in the U.S. by creating the “wet foot, dry foot” policy, which allowed anyone who reached dry land to stay but called for the repatriation of any Cubans intercepted at sea.

In 1996, the Cuban Air Force shot down two small planes, killing four Miami-based Cuban exiles from the activist group Brothers to the Rescue as they conducted a mission to release anti-Castro pamphlets over Cuban territory.

Two years later, the U.S. arrested five Cubans suspected of infiltrating American activist groups, including Brothers to the Rescue. The Cuban government rallied around “The Cuban Five,” teaching the details of their stories to schoolchildren and promoting their freedom on murals and postage stamps.

In 1999, Florida fishermen rescued a young Cuban boy whose mother drowned while traveling by boat from Cuba. After a drawn-out custody battle between his relatives in Miami and his father in Cuba, the Clinton administration forcibly extracted young Elián González, sending him back to Cuba to live with his father.

In the early 2000s, the U.S. stepped up its support of dissidents inside Cuba, meeting regularly with journalists and anti-Castro activists. In March 2003, Cuban authorities jailed approximately 75 of those dissidents for allegedly receiving unlawful payments from the U.S. government.

In the wake of Hurricane Michelle in 2001, the U.S. exported food to Cuba for the first time in more than 40 years, momentarily relaxing the ongoing embargo.

In 2006, Raúl Castro, filled in for his ailing brother, Fidel. Two years later, he officially took over as president.

In April 2009, President Barack Obama lifted all restrictions on family travel and remittances to Cuba and began permitting Americans to take educational or religious trips to Cuba. Soon after, he further eased restrictions, allowing U.S. airports to license charter flights to and from Cuba.

In 2013, Castro and Obama famously shook hands at Nelson Mandela’s funeral, sparking a firestorm of speculation over whether relations between the two countries might soon improve further.

In 2014, the U.S. and Cuba conducted a prisoner swap. The last of “The Cuban Five” were released and sent back to Cuba, and Alan Gross, a U.S. government contractor imprisoned for allegedly bringing communications equipment into Cuba, was sent home.

In May 2015, Obama met Raúl Castro in Panama, marking the first meeting between leaders of the two countries in more than 50 years. Soon after, the U.S. removed Cuba from its list of state sponsors of terrorism.

In 2016, the U.S. and Cuban governments reopened embassies in each other’s capitals but stopped short of appointing ambassadors. While Obama signed a directive easing restrictions on Cuban rum and cigars, the trade embargo remained in place.

U.S. Secretary of State John Kerry delivers remarks at the flag-raising ceremony at the newly re-opened U.S. Embassy in Havana, Cuba, on August 14, 2015. The event marked the first time the American flag was raised at the Embassy in 54 years. Photo courtesy of the State Department / Public Domain.

In 2016, travel restrictions were mostly lifted under the terms of a bilateral agreement, allowing tourists to travel between the United States and Cuba. Americans began returning to Havana, eager to explore the country or reconnect with long-lost family members, and many U.S.-based companies, including Google and Airbnb, began investing in new ventures in Cuba.

Days before leaving office in January 2017, Obama repealed the long-standing “wet foot, dry foot” policy, bringing the U.S. government’s treatment of Cubans in line with its approach towards other undocumented immigrants. The Cuban government welcomed the change, even if many Cuban Americans did not.