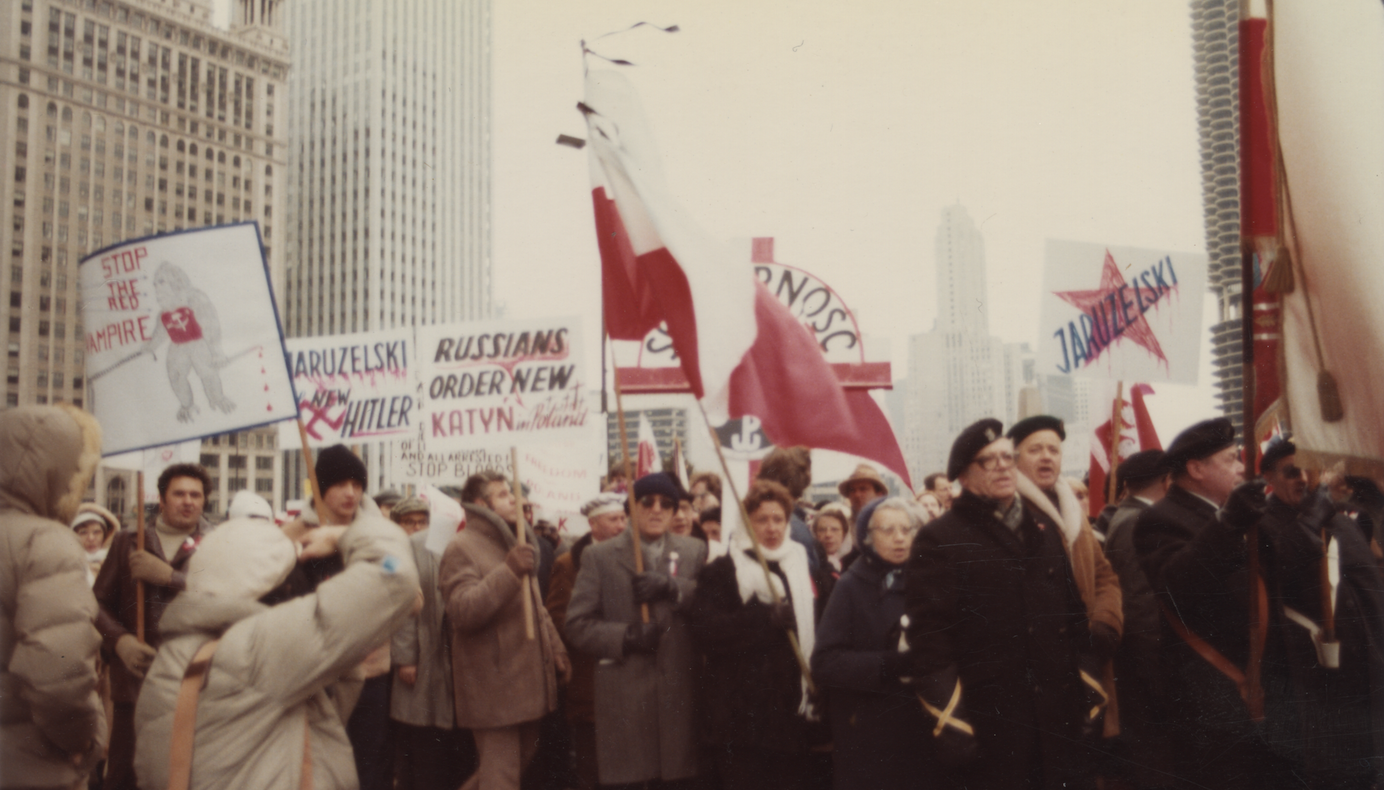 A demonstration in support of Poland's Solidarity in Chicago in December, 1981. Photo: K. Pecak/Courtesy Polish Museum of America

In the waning days of 1981, an estimated fifty thousand Chicagoans followed a coffin draped in a Polish flag from the Loop two miles up Lake Shore Drive to the Polish Consulate. Polish flags waved from the crowd, some adorned with black ribbons of mourning mirrored by the armbands of marchers, while drummers provided a solemn accompaniment.

“I remember looking back down Lake Shore Drive and it was just a swarm of people,” says Richard Owsiany, who was carrying the coffin. “I had never, ever experienced anything like that before.” In front of Owsiany and the coffin bearers was a sign: “In memory of the victims of communism in Poland—may their deaths never be in vain.”

The demonstration honored victims killed since the imposition of martial law by Poland’s Communist regime two weeks earlier. The crackdown, initiated by the Prime Minister, General Wojciech Jaruzelski under pressure from Moscow, followed a brief period of surprising openness in Poland.

After the ruling party raised centrally controlled meat prices in the summer of 1980, strikes broke out in every major industrial city in the country. (Increased food prices in 1970 and 1976 had also led to protests.) At the Lenin Shipyard in the port of Gdansk, workers formed a new union that they named Solidarity. Forced to bow to the widespread protests and struggling economy, the government made the unprecedented move of negotiating with workers in Gdansk, eventually leading to the registration of Solidarity—into which all the new unions across the country had coalesced—on November 10, 1980. With an estimated ten million members, it was the first officially registered independent trade union in a Communist country—and an important step towards the collapse of Communism in Eastern Europe.

“Everybody was optimistic and thought that things were changing,” recalls Owsiany, a native Chicagoan who was president of the Polish Students Club at DePaul University at the time, and is now president of the Polish Museum of America. “That optimism was cut short on December 13, 1981,” when martial law was declared. Solidarity was formally banned the following year.

While Poles and Polish Americans in the United States didn’t experience the repression directly, many of them were deeply involved in trying to end the Communist regime in Poland from half a world away. They took part in demonstrations like the one on Lake Shore Drive and sent food, medicine, and money to support Solidarity and its dissidents. Some even participated in hunger strikes. 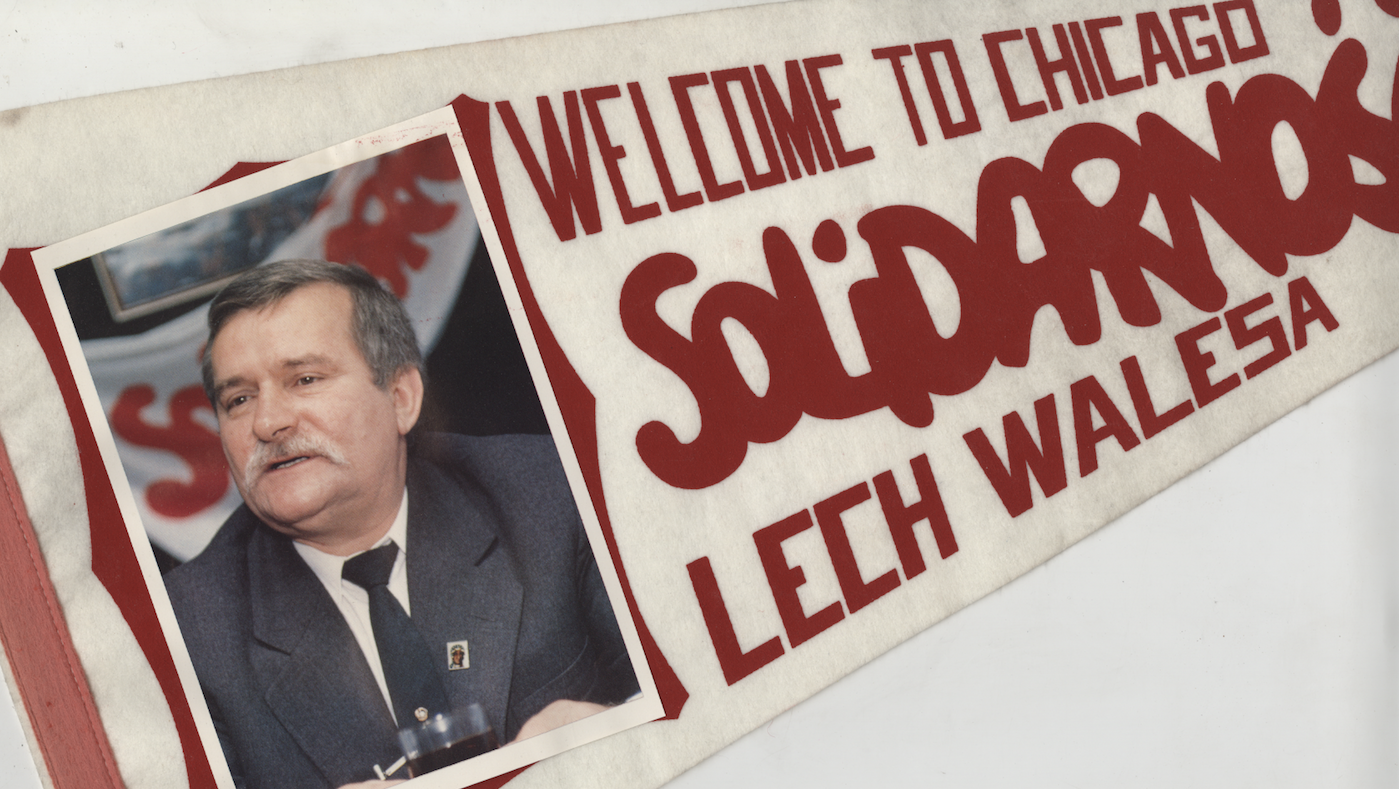 A pennant dating from Solidarity leader Lech Walesa's visit to Chicago following the Round Table Agreement in 1989. Image: Courtesy Polish Museum of America

The Chicago division was led then by the powerful Alderman Roman Pucinski, who spearheaded many of the efforts against Polish Communism, including the Lake Shore Drive march. According to his obituary in the Chicago Tribune, he helped raise $1.5 million for Solidarity over the years. On New Year’s Eve of 1982, he connected directly to the movement when he spoke on the phone to its leader Lech Walesa (who was awarded the Nobel Peace Prize in absentia that year), in a test of government restrictions. “I almost fell off the phone when Lech answered the phone personally,” he said.

Walesa wasn’t the only dissident that Pucinski and the Chicago division of the Polish American Congress connected with; Owsiany also recalls clandestinely meeting the prominent opposition leader Jacek Kuron in Chicago. The Congress gave him cash it had raised to support the printing of dissident materials.

“I think one of the most important things was that the Polish community in Chicago never gave up during that time period,” Owsiany says. “Every day, across the street from the [Polish] Consulate, there was always a group of people demonstrating. Their faith in change was predicated on the fact that they were doing something.”

After the imposition of martial law and the banning of Solidarity, faith could be hard to maintain. “For several years afterwards, it was a difficult and scary time,” says Owsiany, noting as an example the murder of the dissident priest Jerzy Popieluszko. But in its religious manifestation, faith played an important role: the Catholic Church, under the leadership of the Polish Pope John Paul II, supported the fight against Communism, and encouraged the United States government to secretly subsidize Solidarity in its underground years.

The Polish American community also played an important role in pushing the United States to support Polish dissidents, as Walesa acknowledged through an interpreter in a 2009 interview with Chicago Tonight. (Watch it below.) “The Polish Americans played an extremely important role,” he said. “They inspired the assistance of the United States as well.

“So truly speaking, Solidarity was not only [a] Polish movement, it was an international Solidarity,” he continued. “And people from Chicago, among others, contributed to establishing this Solidarity.”


Martial law ended in 1983, and Solidarity and other dissidents continued to work underground to overthrow the Communist regime, always through nonviolent means. The economy continued to falter, especially under international condemnation for the repression of Solidarity, and prices were raised again in 1987 and 1988. In 1987, the government took the unprecedented step of asking in a vote what types of financial reforms citizens preferred, but the options were all rejected.

Under the pressure of more strikes, the Communists invited Walesa to “round table” negotiations in 1989, and eventually agreed to reforms, including a new, free election. Despite the Communists’ attempt to rig the results—non-Party members could only run for less than half of the seats in one body of the assembly—Solidarity routed them, winning 99 of 100 seats in the newly created Senate and all available seats in the other body. It was the first free election in any Soviet country.

The Communists were eventually forced to accept the overwhelming vote, and Tadeusz Mazowiecki became the first post-Communist Prime Minister in August, 1989. Within several months, Poland’s Communist Party had been dissolved. Communist regimes in the Eastern bloc quickly followed Poland’s lead, culminating in the dissolution of the Soviet Union itself in 1991.

“It’s a beacon of change,” says Owsiany about Solidarity and the end of Communism in Poland. “Under a repressive regime, a nation of people organized themselves and stood up for what was right, basic human rights. I think it serves in today’s world of what a nation can do to try to make change.”

As the people of Poland’s neighbor Belarus continue to protest the disputed reelection of their longtime leader amidst a repressive security crackdown, it’s a beacon that remains relevant—and inspirational.