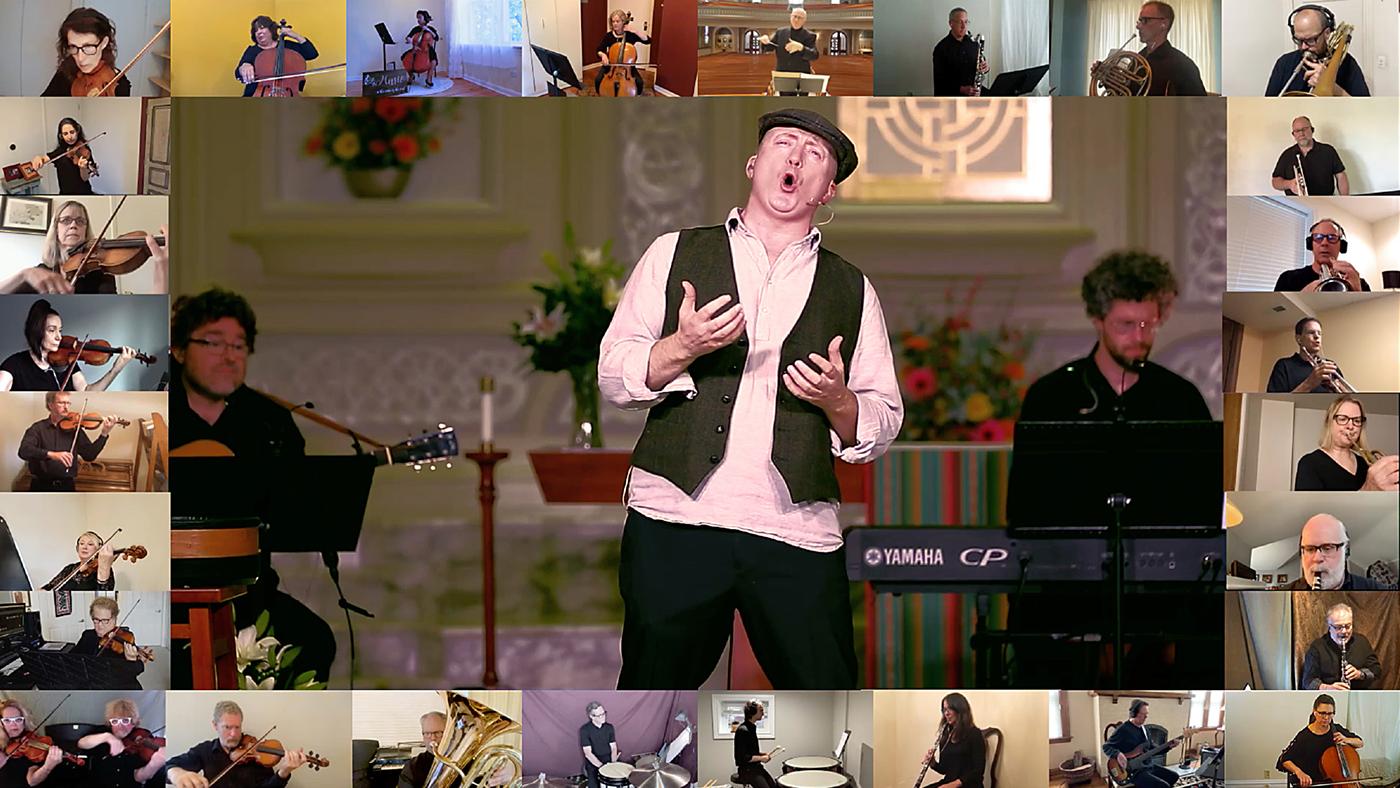 While Paddy Homan performed at Old St. Patrick's Church, The City Lights Orchestra recorded individual performances that were later stitched together for "I Am Ireland."

A new special tells the story of Ireland’s journey to independence through the perspective of prominent Irish leaders, and the people behind the production think its message can offer hope to audiences amid the pandemic.

Through storytelling and songs, I Am Ireland examines Ireland’s long struggle for freedom. The special, which airs Tuesday, December 15 at 9:00 pm on WTTW, features music and stories from traditional Irish tenor Paddy Homan, who is virtually accompanied by 40 members of The City Lights Orchestra. Homan, who developed and has performed I Am Ireland live many times, worked with The City Lights Orchestra conductor Rich Daniels and the Irish Fellowship club to bring the story to life on screen.

A 1959 documentary Mise Éire (“I am Ireland”) inspired the story. The documentary shares a name with a poem by Padraic Pearse, and tells the story of Ireland’s fight for independence up through the 1916 Easter Rising, of which Pearse was one of the leaders. The documentary’s score was also a source of inspiration for Homan. Seán Ó Riada, who Homan says is considered to be Ireland’s first national composer, wrote the music for the film.

“I said to myself, I can't exactly play the part of Seán Ó Riada himself because that's like taking on the Holy Grail,” Homan says. “I just said let's look at it a different way. Let's tell Ireland's story from the perspective of the great leaders of that time between 1798 and 1916.”

Homan evokes Irish leaders like Michael Collins, Robert Emmett, Thomas Davis, and others. But this isn’t a new story for Homan; it’s something he’s been performing for years.

“The first thing I said when I saw the thing is, ‘Wow, this thing is made for PBS!’” says Daniels.

After a couple years, the two got serious about making it into a television production, then did just that.

“But when the world turned upside down on March 11, we realized that all bets were off,” Daniels says. “So without calling it all off and waiting until the world we re-started, I said, let's do what we call the pandemic version of this.” 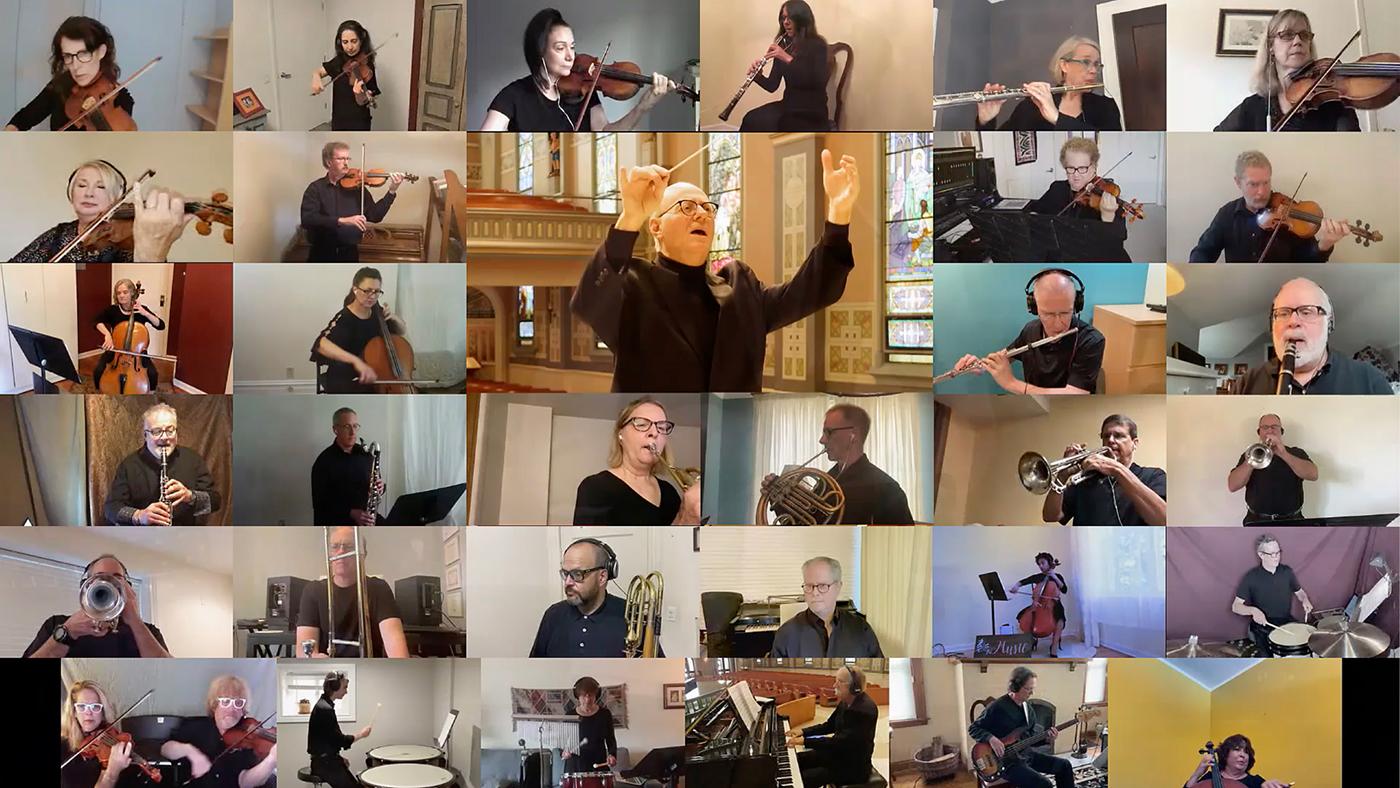 Conductor Rich Daniels, center, said he wanted the performance to feel live even though he was really "waving my arms to the air."

For so many performers and musicians, transitioning to a “pandemic version” meant going virtual — and figuring out a lot of technical coordination. All 40 members of The City Lights Orchestra filmed themselves in their own homes, performing to a click track to keep everyone in sync. With nearly 60 minutes of music, that amounted to over 700 individual tracks for sound editor Steve Yates to knit together piece by piece.

“At the end of the day, we wanted it to look and feel as if it was happening live in real time with everybody at the same moment,” Daniels says. “So you'll even see me waving my arms to the air … [and] you’ll see the musicians all responding likewise to a conductor who's not there on their screen.”

Homan, three accompanying musicians, and dancer Brian Cunningham were able to perform while socially distanced at Old St. Patrick’s Catholic Church on Adams Street. Homan points to the importance of the church — which is the oldest church in Chicago — to the city’s Irish community. Homan says it was “a sacred moment” for him to perform in the church.

“There is actually a particular stained glass window that was dedicated to one of the Irish rebel leaders,” Homan says. “This show would not have ever been made anywhere else — only in Chicago, because of the great tradition of Irish music, culture, and community that’s here.”

Daniels says he thinks audiences can find some comfort in the visuals of an orchestra coming together virtually.

“My hope is that it provides inspiration and provides some hope. It provides the ability for people to see that through tenacity and perseverance, all things can be accomplished and that people are stronger than individuals and that we can surpass any challenges we have in our lives,” he said.

For Homan, there are plenty of lessons to be learned from the story of the Irish road to freedom, too. Homan points to the link between history and music, quoting Irish revolutionary Michael Collins, who wrote that, as Irish lands became dispossessed, a new type of music emerged in which “songs of hope, songs to inspire, and songs of rebellion” took shape.

“It's almost as if, because of COVID, this show began to speak back to us,” Homan says. “There's a message of hope within this story, and it's one of resilience as well. But it also shows the power of the human spirit to overcome.”