The Foods (and Importance) of Diwali 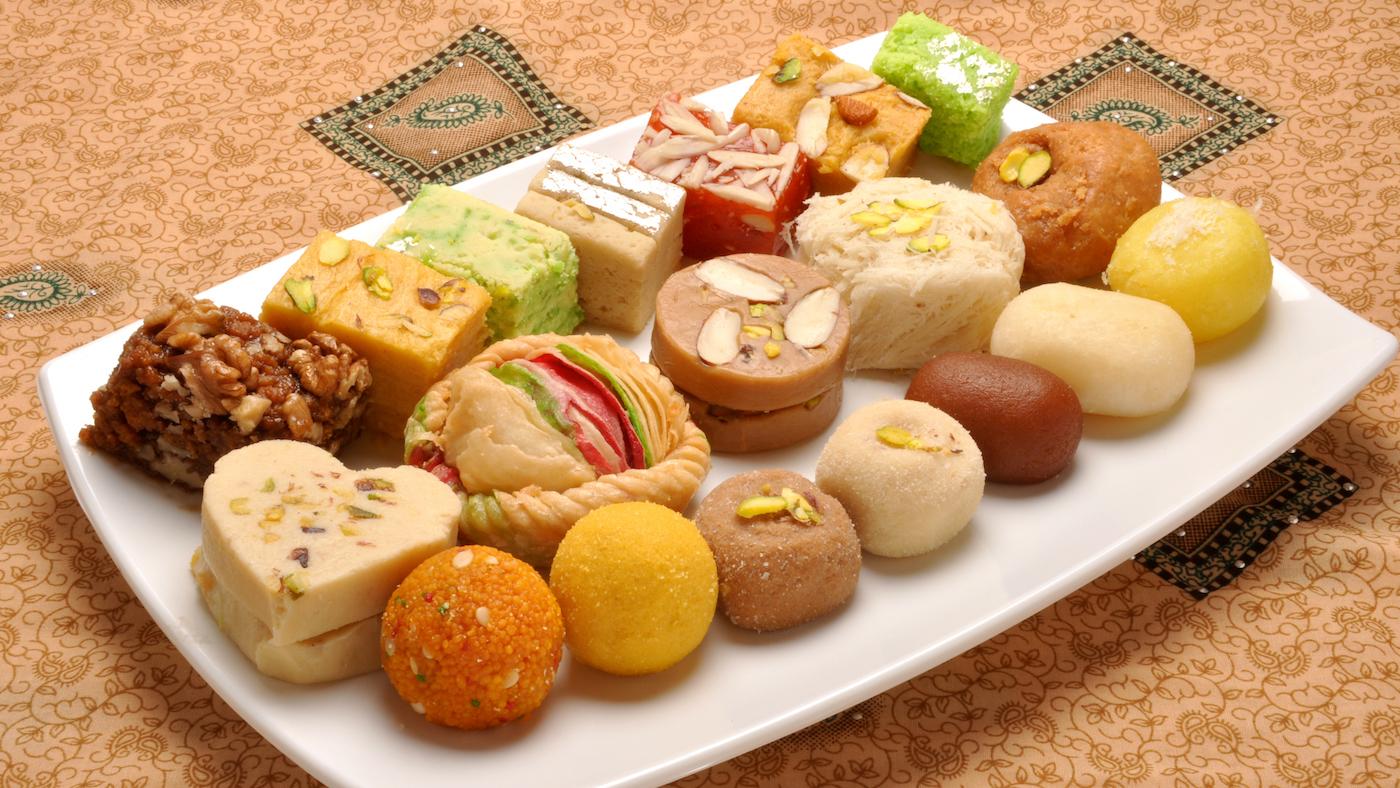 Ladoo, barfi and other confections are a big part of celebrating Diwali. Photo: iStock

If you go to Chicago’s Little India along Devon in West Rogers Park right now you’ll find it bustling even more than usual. That’s because it’s Diwali, a five-day festival that marks the new year in the Hindu calendar. Thursday, November 3 is the third day, marking the final day of the year; it is followed by the first day of the new year on Friday and a day honoring the bond between brothers and sisters on Saturday.

“It is the most important holiday for our community,” says the Chicago-based cookbook author and entrepreneur Anupy Singla. “It’s also similar to Christmas, where it’s celebrated by so many communities for both secular and religious reasons. For our Hindu community, it is a religious celebration: we are going to temple, we are celebrating with religious ceremonies, Pujas.”

One religious story associated with Diwali involves the deity Rama and his return to his kingdom after a fourteen-year exile. “They celebrated by lighting the whole town,” Singla explains. With the beginning of the new year, those lights signify a movement out of darkness during Diwali, and so Hindus set out diyas—earthenware lamps—or strand lights around their homes for the festival. “Another part of that is warding off evil and shedding negative thoughts, really focusing in on positive thoughts for the year ahead,” Singla says.

Cleaning your home is often a part of that transition, of moving into a fresh, positive new year. “I’ve taken the pressure off and said I will clean one closet,” Singla says, laughing. “It’s a lot of pressure to clean the whole house!”

Diwali is also important for businesses and individuals as a time to restart their books. People offer prayers to Lakshmi, the goddess of wealth and prosperity, and make sure to keep lights burning or switched on into the night so that they are not passed over by her.

Binal Amin, who attends and volunteers at the BAPS Shri Swaminarayan Mandir in suburban Bartlett, explains. “You close out the year and pay off your debts,” she says. Worshippers bring their account books to a ceremony at the Mandir, or house of worship, on the third day of the festival. “You pray for happiness and prosperity in the new year, but not just in a material sense. You also pray for intangible wealth, in the sense of family, friends, community, unity, knowledge.” In addition, your wealth should be used charitably, not selfishly.

In non-COVID times, Thursday’s ceremony would be followed by a huge fireworks display at the Mandir. The house of worship is still open to any visitors, however (as it always is), and volunteers such as Amin will be on hand to give tours and answer questions. She’s a fitting guide, given her long involvement with the Mandir and her enthusiasm for the holiday. “You know those people who decorate for Christmas way in advance?” she asks, laughing. “I’m like that for Diwali.”

Prayers and lights are not the only thing offered up during the holiday. People decorate outdoor areas with traditional designs in colored sand or rice flour. Furthermore, a vast array of sweet treats are an integral part. “This is probably one of the absolute busiest times for sweet shops,” says Singla. “People will take sweets and drop them off at their friends’ houses, or have them in their own house, to signify the celebration: to sweeten someone’s mouth, or give them something really delicious for dessert. And we always offer up something sweet in prayers as well.”

Many of the confections are difficult to make at home: treats like the spherical ladoo or many-flavored barfi, which are offered in colorful abundance at sweet shops. “The art of making dessert is so intricate and it’s so overwhelming even for someone like me, whose career is cooking,” says Singla.

She will make halva, a rice pudding-like dish consisting of cream of wheat or whole wheat flour with butter and water. “My dad is from a really tiny village in India, so we make halva from whole wheat flour because it wasn’t easy to get cream of wheat back in the day; it was expensive. It’s a really auspicious dish that we offer up with prayers, and then my daughters are obsessed with it.”

On the savory side, meat is avoided during Diwali. (Many practicing Hindus are vegetarian all the time, Amin points out.) “It was tough for me because I’m recipe-testing for a book and I have to finish it, and I’m on the meat section,” says Singla with a laugh. “I had to literally stop testing for my book.” She was also planning on serving some of the frozen vegetarian products of that recipe testing, but when she told her mother, “she just paused on the phone. She was so horrified, even though I’ve been cooking non-stop for the last three months!”

(The book Singla is working on is The Indian Instant Pot, an adaptation of her popular The Indian Slow Cooker that she is hoping will be out next year.)

So instead Singla will be making fresh palak paneer—cubes of cheese in a spiced spinach puree—the fried bread poori, and dal makhani, a black lentil dish. “A black dal takes so long on the stovetop to really perfect and get right, so that’s seen as a specialty dish you have to have,” she says. Other common dishes might include chana masala, curried chickpeas, or vegetable dishes like aloo gobi, spiced potatoes and cauliflower.

Many Hindus also prepare food as an offering for the gods during Diwali, in thanks for the bounty of the previous year. Amin will wake early in the morning on the fourth day of the festival to prepare several dishes fresh to bring to the Mandir for a morning service as an offering known as Annakut—literally, “mountain of food.”

While South Asian communities celebrate Diwali wherever they are in the world, it is less publicly known and widespread in the United States outside the diaspora. “It’s really not embraced the way it is even in Europe. In England, they turn all the lights on everywhere,” says Singla. “There’s less awareness here. My husband was on a call with Singapore, and he said the whole country was shut down” for Diwali.

“In India it’s just amazing,” she continues. “They start with firecrackers and selling everything a week in advance, and there is so much fun stuff attached to Diwali. Everything shuts down, and there’s no business done.” Even Muslim and Christian communities celebrate it in a secular way.

The holiday might not be as prominent in the U.S., but South Asian communities like the one centered on Devon in Chicago are no less enthusiastic in their celebration. “We’re exchanging sweets and we’re going to Devon,” Singla says. “We’re going to enjoy it. We’re going to have fun with it.”