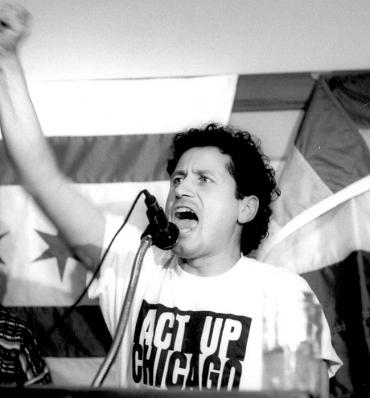 When the AIDS epidemic began in the early 1980s, it hit San Francisco, Los Angeles, and New York City hard. People died quickly, horribly, and in large numbers. Chicago was relatively low in the number of AIDS cases, but that changed. The reality of the disease and the impossibility of containing it became obvious soon enough. Chicago had to face an awful disease without a cure that was not only killing people, it was killing people the power elite in the city weren’t fully ready to support – notably gays, drug users, people of color, and people in need of blood transplants.

Among the responses to the situation, and amid the lack of action by the city, state, and national government, was the creation of ACT-UP, or the AIDS Coalition To Unleash Power. ACT-UP courageously staged demonstrations, sit-ins, invaded church services, put up posters on public transportation about safe sex, occupied city buildings. They marched on the AMA in Maryland and the AMA convention in Chicago. Thousands of people jammed the streets and public plazas and made a spectacle of the disease that was ravaging the city and its gay population.

In June of 1981, a report was published by the CDC of five men in Los Angeles who had been diagnosed with pneumocystis pneumonia with no identifiable cause. This is sometimes referred to as the “beginning” of AIDS, but in light of the information we now have, it would be more accurately called the beginning of the awareness of AIDS in the United States. The disease was known by several different acronyms and names, such as “GRID” (gay-related immune disorder), the more inclusive “CAID” (community-related immune deficiency), and the pragmatic if not particularly sensitive “Gay Cancer.”

By 1983, a little more than 1000 people in the U.S. were reported to have died of the disease, and only a small number of them in Chicago. Hysteria about how the infection spread led to unfounded fears about contact with gay people. And with death rates doubling quickly, it became a political hot potato, with the president refusing to talk about it.