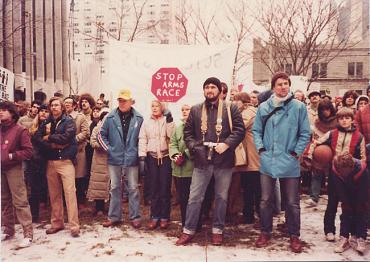 In the winter of 1982, 20,000 peaceful protesters took to the streets of Chicago calling for the end of America’s nuclear arms race with the Soviet Union. The protest marked the nearly fortieth anniversary of Enrico Fermi’s first nuclear chain reaction at the University of Chicago. The path forged by Fermi was sure to lead to the destruction of the earth and its inhabitants, and in ’82, Chicagoans said, “The road ends here.”

Organized by Pearl Hirschfield and Shirley Lens, the protesters demanded that President Reagan listen to the unified voice of the people – enough was enough. The march ran for two miles and ended in a rally in Federal Plaza where speakers from all backgrounds, including then-Representative Harold Washington, condemned the arms race and demanded the government’s withdrawal. And together they sang as a reminder to their elected officials, “This land was made for you and me.”