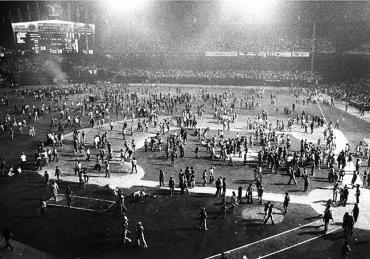 During the ’70s, White Sox fans saw a slew of gimmicky promotions under the franchise ownership of Bill Veeck and his son Mike. Disco Demolition began as just another one of those gimmicks, co-conceptualized with rock ’n’ roll radio DJ Steve Dahl, but it quickly spiraled out of anyone’s control.

People came out in droves. The cost of attendance was 98 cents plus a disco record, and although the game quickly sold out, thousands more showed up that afternoon to mark the death of disco. The idea was to blow up a pile of records in between each game of the White Sox vs. Tigers double-header, but the crowd had ideas of its own. Fueled by booze, over-the-top pyrotechnics, and Steve Dahl’s aggressive manner, spectators rushed the field and the Sox had to forfeit the second game to the Tigers.

‹ Solti Takes the CSO on First European Tour up The Beat Goes On and On: Chicago House Music in the '80s ›