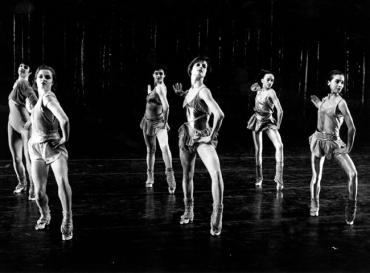 The world-renowned Hubbard Street Dance Chicago, originally the Hubbard Street Dance Company, emerged in 1977 from a studio located at (you guessed it) the corner of Hubbard and LaSalle streets in Chicago. The studio was the home of choreographer/teacher/dancer Lou Conte, who had returned from Broadway in the early ’70s to open his own studio and teach tap dancing. Several of the dancers approached him about performing for the elderly in senior and community centers around the city, and thus a company was born. HSDC continued to grow throughout the remainder of the 1970s, giving its first “downtown” performance in ’81 and then making its national and international debuts in New York City and Paris in ’83.

Conte and the company had success with pieces that were energetic and influenced by both Broadway and jazz. The dancers were, however, extraordinary. Conte’s work grew to match their talent, and he invited other choreographers to work with the company, encouraging the choreographic career of HSDC dancer and director Claire Bataille. By the late 1980s, Daniel Ezralow choreographed the relentless, virtuosic “Super Straight is Coming Down” and Twyla Tharp was creating world premieres for the company.