Higher levels of the pueblo are accessible by ladder. If enemies approached, the ladders could be pulled up. Photo credit: Deanna Nelson

The buildings are constructed of adobe — sun-dried, mud building blocks made from earth available near the building site. Photo credit: Deanna Nelson

After the adobe bricks are stacked, mud plaster is layered on. Photo credit: Deanna Nelson

The adobe construction provides natural insulation and energy efficiency, reflecting heat during the day and providing radiant warmth through the cold desert nights. During the winter, a small indoor fire supplements the radiant warmth from the adobe walls. Photo credit: Deanna Nelson

The pueblo's viga roof construction, seen from the interior. Light is pouring in through a ceiling hatch. Photo credit: Deanna Nelson

A site plan for Taos Pueblo, created from surveys conducted by the State of New Mexico in 1973. Photo credit: Public Domain

Members of the Taos Pueblo assemble for a community event in the early twentieth century. Photo credit: Library of Congress

The words "green" and "sustainable" might bring to mind images of sleek, modern, energy-efficient homes. But long before solar panels made their debut, the Taos Pueblo community in current-day New Mexico stood as a model for locally sourced, climate-conscious design and building methods. 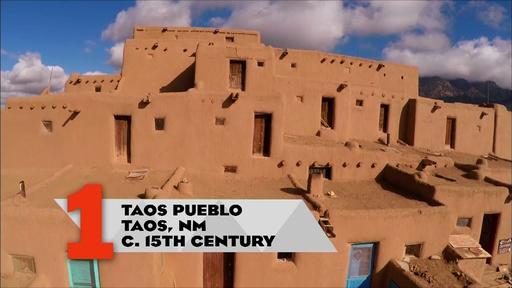 Occupied by the Taos Pueblo Indians for more than 600 years, this cluster of dense, stacked buildings embodies the concept of "it takes a village" - both to raise its young and to build, protect, and sustain itself. 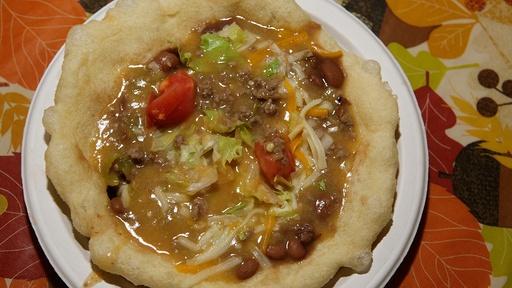 Two-foot thick, load-bearing adobe walls on the lower levels support the pueblo's upper floors. These thick walls allow the living units to stack five stories high, with access to the upper levels via exterior ladders. This design also provided protection if enemies approached. Residents could pull the ladders up behind them and enter the living spaces via ceiling hatches.

The load-bearing building design seen in these pueblo walls remained the standard for tall buildings for hundreds of years, even for the earliest tall buildings constructed of brick in cities such as Chicago and New York, before the advent of steel-frame construction.

Today, while most Taos families live in modern homes outside the pueblo, the community continues to maintain this ingenious ancestral structure as part of its heritage.

Taos Pueblo is the only living Native American community that has been designated both a World Heritage Site by UNESCO and a National Historic Landmark. 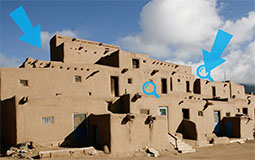 The Taos Pueblo has been occupied in current-day New Mexico for more than 600 years.