Lock 17 along the Erie Canal in Little Falls, New York, in 2017. Photo by Matt Ossowski Erie Canal – 1825. Painting by Carl Rakeman showing the Seneca Chief, the flagship of a flotilla making the maiden voyage down the Erie Canal, date unknown. Courtesy of the Federal Highway Administration Erie Canal at Salina St., Syracuse, N.Y. Published by the Detroit Photographic Co., circa 1900. Courtesy of the Library of Congress 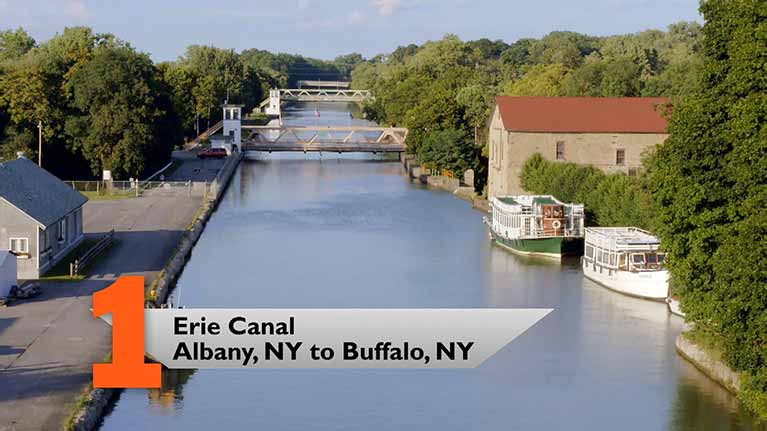 In 1806, merchant Jesse Hawley’s inability to secure quick, economical transportation for his flour cost him not only money but his freedom. He was sentenced to 20 months in debtors’ prison after one of his shipments of flour went bad.

From inside the prison walls, he wrote a series of essays in which he laid out his case for the construction of a great canal across the state of New York, from Albany on the Hudson River to Buffallo, on Lake Erie. By linking the East Coast with America’s fertile interior, the canal could both solve his problems and secure the country’s economic future.

In a series of essays published in 1807 and 1808 under the pseudonym “Hercules,” Hawley called the canal’s potential benefits “the most immediate, and consequently the most extensive” of any public works project that the United States could undertake at that time.

Not everyone, however, was convinced. In 1809, Thomas Jefferson called the proposal “a little short of madness.” The young United States of America didn’t have an engineering school or any professionally trained engineers with experience with such a massive project, and the size and scope of the project, which would need to run through miles of Appalachian Mountains, seemed insurmountable.

The idea of a canal connecting the Atlantic to the interior was not entirely new. It was reportedly a favorite topic of discussion by President George Washington. It was, according to Ashley Maready, curator at the Erie Canal Museum, an early expression of Manifest Destiny,  “wanting to expand the country, wanting to expand America’s influence, [and] wanting to get beyond… this little section of the country that’s bracketed in by the Appalachian Mountains.”

But in addition to the technical challenges, there were vehement disagreements over whether the US Constitution allowed the federal government to pay for any public works project – particularly one that would benefit only a portion of the country.

If a canal was going to be built, it would fall upon the State of New York to finance and oversee the project.

As luck would have it, Hawley’s essays found just the right audience. New York City Mayor DeWitt Clinton was perpetually on the lookout for bold, ambitious ideas that might help his city secure its place as the economic powerhouse of the United States.

In 1817, after Clinton spent years studying and promoting the idea and enduring public ridicule over what some called “Clinton’s folly,” he finally convinced the New York State Legislature to commit seven million dollars to build a 363-mile, 40-foot-wide ditch from Albany to Buffalo, New York.

Then it was time to get to work. Much of the hard labor fell to thousands of New York farmers armed with shovels, hand tools, and of course, their beasts of burden – in this case, horses and oxen.

Since a steam-powered device for land excavation wouldn’t come around for another two decades, they also adopted or created several machines to help with the job. They used primitive bulldozers known as “slip-scrapers,” made of a giant blade fixed to wrought iron plows and pulled by horses or oxen.

Workers also built devices called “tree-fellers,” which allowed a single man to topple a tree. First, he would climb the tree and attach one end of a long chain or cable. When back on the ground, he’d wind the other end onto a cranking device with a wheel that would pull the tree down with a chain or cord, tearing the tree roots out of the earth.

For trees that were cut down the old-fashioned way, ox-powered “stump pullers” were built to help lift the stumps out of the ground. A chain was wrapped around the stump and then attached to a series of wheels and a spool nearly 14 feet across and 16 feet high, its cables pulled by a team of oxen.

And when workers hit stone, they had to start blasting. Dynamite hadn’t been invented yet, so they used black powder, which is less powerful, but still potentially lethal.

“It was a pretty dangerous job… set the powder, and then light everything and run,” said Maready.

But the real engineering marvel of the Erie Canal was built to overcome another hurdle: a 565-foot elevation change between the Hudson River and Lake Erie. Crews built a system of 83 locks, which are akin to elevators for boats, to help control the water’s flow. The boat enters a chamber, which is either filled or drained, lifting or lowering the vessel before the gate on the other side opens and releases it.

After eight years of digging earth, blasting rock, felling trees, pulling stumps, and constructing locks, the canal opened on October 26, 1825. Jesse Hawley, representing the people of Rochester, spoke at the festivities in Buffalo. As part of those celebrations, now-Governor DeWitt Clinton and his party boarded the canal barge Seneca Chief, headed to the Atlantic Ocean for the inaugural voyage. They brought with them two wooden barrels of Lake Erie water collected in Buffalo. Eight days later, in New York City eight days later, Clinton ceremoniously emptied the Lake Erie water into the Atlantic Ocean in what has been called “the wedding of the waters.” 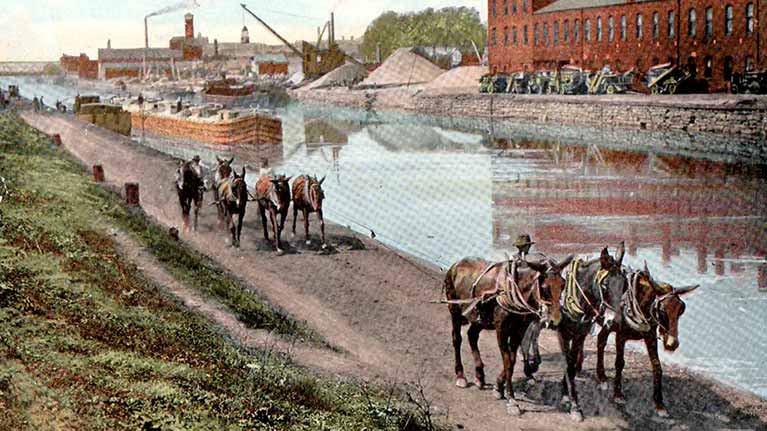 In fulfillment of Hawley’s prediction, canal traffic was heavy from the get-go. Settlers moved west to start new lives farming the frontier. They sent barges full of wheat and lumber back east and purchased machinery that had been shipped out west from the coast. The reduced shipping costs supported a period of exponential growth in the US economy and the development of several related industries in manufacturing and food processing.

Towns sprouted along the canal, many of them developing their own niche. Syracuse, for example, became known as the “Salt City,” while Rochester developed several businesses for flour milling.

Along with commerce, people and ideas traveled along the canal. Several of the nineteenth century’s most influential social reform movements – including abolitionism and women’s rights – flourished in towns along the canal’s waterways.

The Erie Canal also provided a foundation of knowledge that was drawn upon to help build several other canal projects throughout the country. The canal itself became known as “America’s First School of Engineering.”

“These guys were learning as they went,” said Maready. “They had some experience doing land surveying, but nothing on this scale, and the Erie Canal became sort of their learn-as-you-go project.”

The Erie Canal was a project that helped the young United States of America prove its ability to think big and to accomplish great things. In doing so, it laid the foundation not only for historic economic growth, but for the many ambitious public works projects that would soon follow.