A portrait of William Penn, completed for the bicentennial of Philadelphia in 1882. Photo credit: Library of Congress

A 1790s view, showing the dense housing (and lack of green space) that had by then filled out Philadelphia's riverfront area. Photo credit: Library of Congress

Despite the higher density on each block, the street grid Penn established remained intact and became an outstanding example of an orderly urban grid. Photo credit: Library of Congress

Philadelphia's eastern riverfront in 1768, viewed from across the Delaware River in current-day New Jersey. Photo credit: Library of Congress

Philadelphia's City Hall stands at the physical center of Philadelphia on a public square established by William Penn in 1682. Photo credit: Steve Boyle

In his native England, William Penn had been persecuted, then jailed in the Tower of London, for his Quaker beliefs. So when he came to America and established the province of Pennsylvania, he promised all settlers that they would have a voice in government, the right of trial by jury, and the right to pursue one's own religious views - freedoms that became the foundation of the U.S. Constitution. 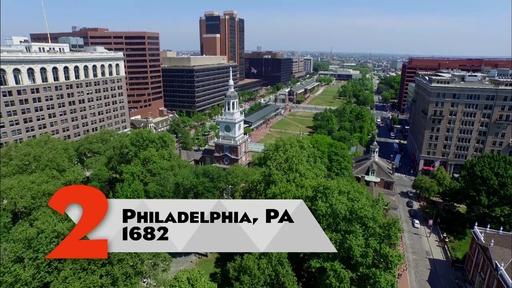 When Penn surveyed a site for a new city located between the Delaware and Schuylkill Rivers, he sought a peaceful contrast to the crowded, squalid conditions of London. Penn described a "green country town" and laid out a grid with wide streets, spacious lots for homes, and green public squares. He named his city "Philadelphia" - Greek for "city of brotherly love."

The homes were to be placed at the center of the large lots, with space for gardens and orchards surrounding them. It was a bucolic view of what a city should be, but in many ways, it was overly optimistic. As the city began developing, people sold parts of their lots to others who wanted to be near the waterfront. They cut the large lots into pieces with alleys onto which more dwellings were crowded. And they built dense clusters of rowhouses, filling the lots with homes.

In many ways, they recreated just what Penn was trying to avoid: London-style congestion.

It wasn't just the city size and layout that deviated from Penn's vision. His fellow Philadelphians, not sharing all of Penn's ideals, tended toward contentious divisions and a lack of civic common cause.

But while Philadelphia didn't turn out to be quite the "green country town" Penn had envisioned, the street grid and green public squares he planned did live up to his hopes and helped establish Philadelphia as the center of the region.

Penn's street grid set an example that other cities looked to as they grew, and it remains an important part of Philadelphia's urban fabric. 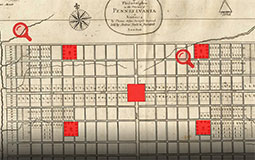 William Penn envisioned a “green country town” with large lots for each home. His plans gave way to more density, but the layout of Philadelphia remained strong.