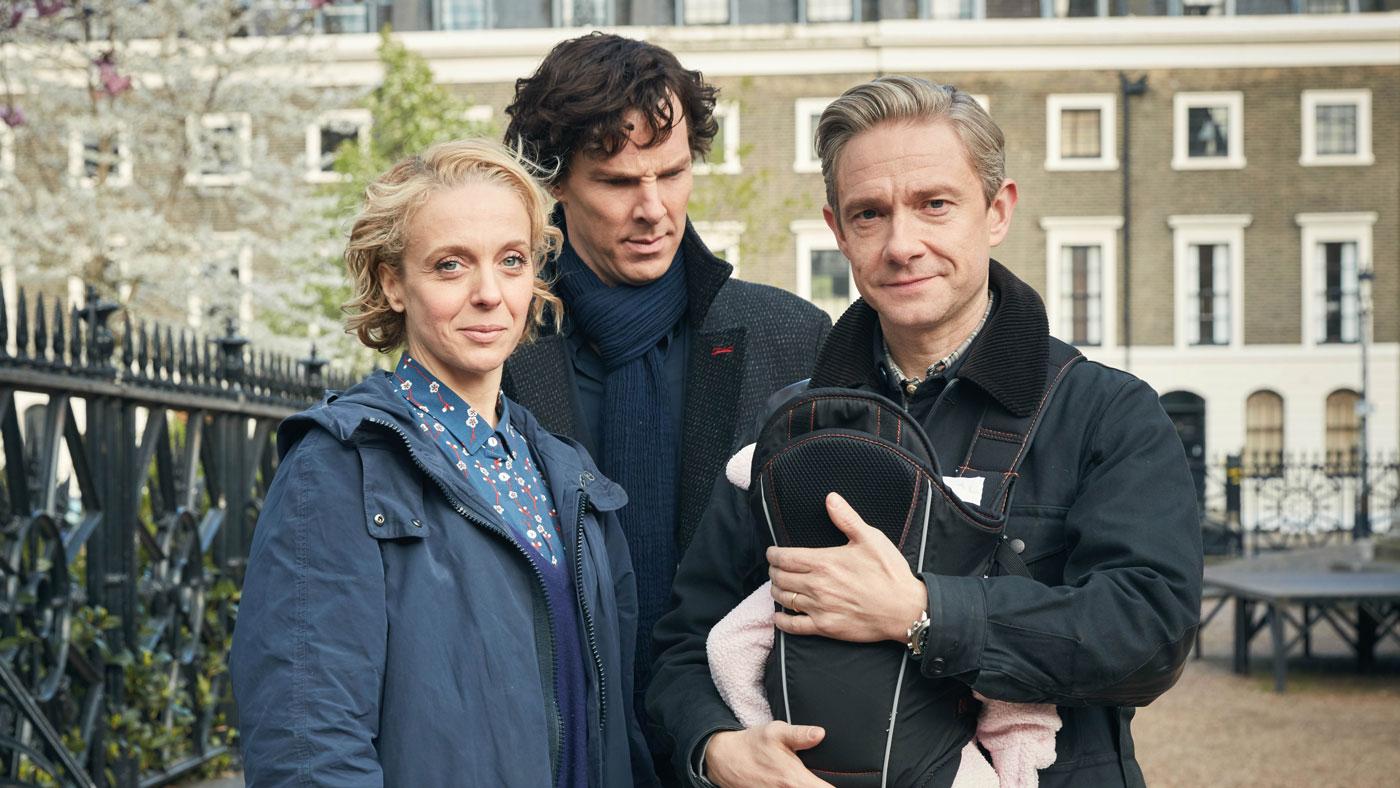 "The Six Thatchers" features a significant birth and a shocking death. (Robert Viglasky/Hartswood Films 2016 for MASTERPIECE)

Sherlock is finally back. "The Six Thatchers" is an unsurprisingly consummate display of dissimulation even if it is rather short on mystery. Benedict Cumberbatch delivers a tour-de-force performance as the sociopathic Sherlock, and his blithe indifference to others begins to have some dire consequences−not least on his best friend John.

Season 4 is the darkest yet according to show co-creators Steven Moffat and Mark Gatiss, but it begins with some light humor. While Mycroft debriefs Sherlock, Lady Smallwood, and another official on the doctored video the government will use to shift blame from Sherlock for the killing of Magnussen (a trigger-happy sniper shot him), Sherlock tweets about his return to English soil and exchanges banter with the quaint secretary hidden in the corner of the room.

Sherlock then dives headlong into cases, even as John and Mary prepare for a child. The birth of a daughter Rosamund; the naming of Mrs. Hudson, Molly, and Sherlock as godparents; the christening of the baby: all of these fly by in a breathless sequence entirely characteristic of the show and its protagonist, while Sherlock rattles off the solutions to cases and surmises the backstories of clients with barely a glimpse up from his phone. So much for a more emotional Sherlock who cares for John and Mary.

(There’s some fun teasing of fan theorizing tucked in here. Sherlock spins an elaborate conspiracy yarn involving Moriarty and the wife of a client, a parody of popular theories about Moriarty’s return.) 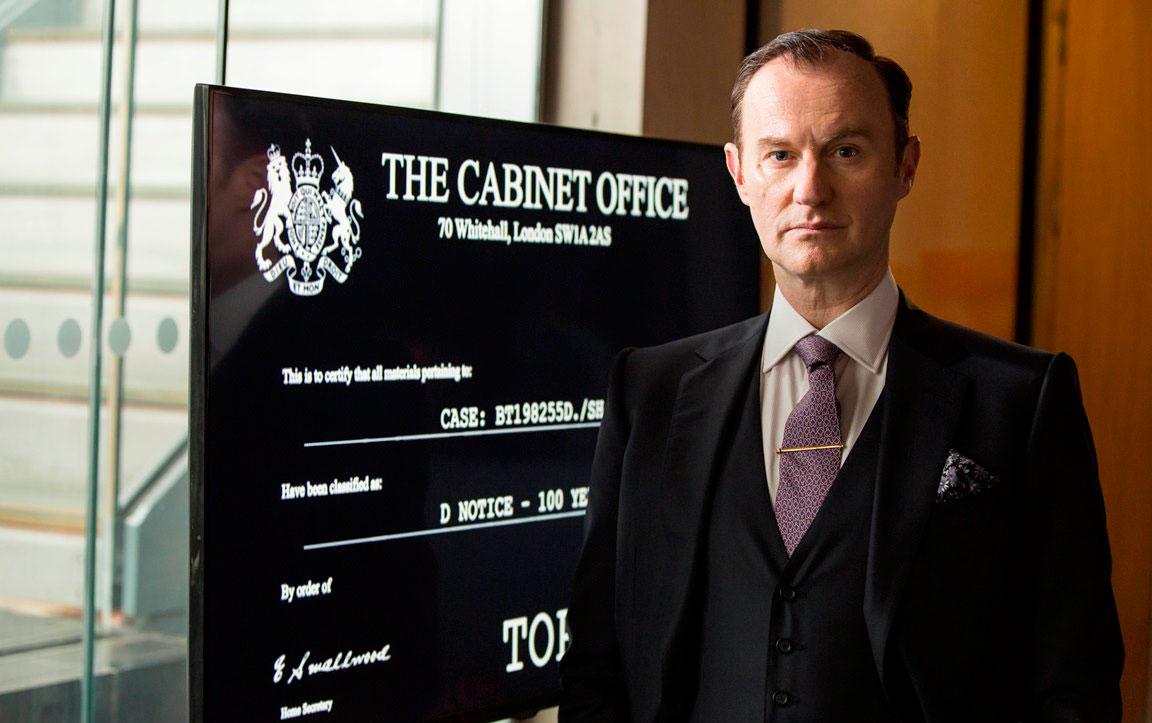 The one ominous note early on is Sherlock’s narration of a tale in which a merchant fails to outrun death, while the camera follows sharks around in eerie, light-dappled tanks. Mycroft informs us that Sherlock tried to rewrite the story so that the merchant succeeded−Sherlock fears death and abhors fate. And since he’s gotten away with murder, why should fate bother him?

The title case of the episode is brought to Sherlock by Lestrade. A parked car in front of a government minister’s house burst into flames after being hit, and the minister’s son was found inside, dead for a week. Sherlock solves this in short order: the boy intended to surprise his father on his 50th birthday, but died of a stroke while disguised as a chair in his car. 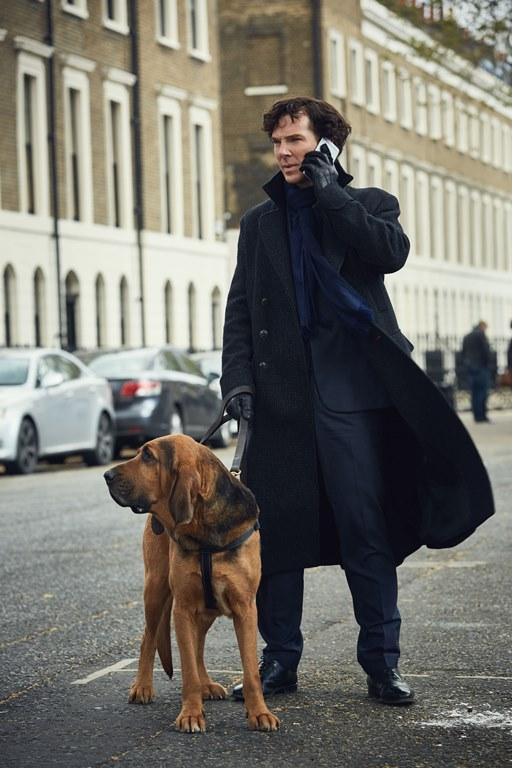 Sherlock on the job with a dog. (Hartswood Films and MASTERPIECE) But then, a smashed bust of Margaret Thatcher taken from the minister’s home piques Sherlock’s interest. Unusually for Sherlock, this case adheres closely to its namesake Conan Doyle story, “The Six Napoleons;” a hacker whom Sherlock employs for help even comments that “Thatcher is like, I don’t know, Napoleon.” With the help of the hacker and his bloodhound dog, Sherlock finds out that the busts were made in Tbilisi, Georgia, and only six exist. The disappearance of the black pearl of the Borgias, which Sherlock originally dismissed as boring, seems to become more relevant. More busts are smashed, a man who owns two is murdered, and soon only one remains.

Sherlock lies in wait for the thief at the house of the last Thatcher and engages in an extensive fight with him. (Not sure how Sherlock wins this, given the identity of the thief, but whatever.) Sherlock smashes the bust, certain that the Borgia pearl is inside, just as it was in the original Conan Doyle story. Instead he discovers a memory stick among the shards, labelled A.G.R.A.−identical to the one containing Mary’s past that was burned in a fire by John.

The thief tells a perplexed Sherlock that he’s going to kill Mary because she “betrayed us all.” The episode then veers off into James Bond-ish secret agent territory. We see a flashback to a hostage crisis at the British embassy in Tbilisi six years ago. An elite quartet called A.G.R.A. rappels into the building but quickly runs into a trap. Mary is part of the team, as is the man who has been smashing Thatchers. He runs and hides the memory drive in a bust in a plaster shop, then is captured and tortured. 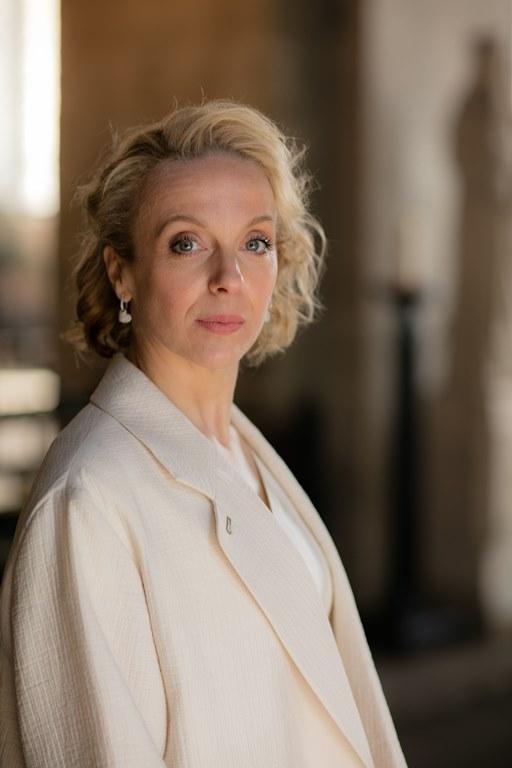 Mary Watson's past is catching up. (Laurence Cendrowicz/Hartswood Films 2016 for MASTERPIECE) Back in the present, Sherlock confronts Mary. She tells him about A.G.R.A.−which are the initials of the team members, Alex, Gabriel, and Ajay, with Mary as R−and how each agent carried a memory drive with ruinous information about everyone else in order to insure complete trust. But she thought everyone died in Georgia. How did Ajay survive and why does he want to kill her?

Once again, Mary runs from her problems. She drugs Sherlock, sends a letter to John, and embarks on a cross-continental flight, adopting new identities and traveling to remote destinations chosen by the roll of a dice. Yet the whole extensive sequence is a waste of time (for her and the viewer), as Sherlock and John catch up to her−they placed a tracker on the memory stick.

Poor embattled John berates Mary for leaving him without discussion and she reveals that her real name is Rosamund. The marital dispute goes no further, for Ajay appears, having tracked Sherlock. Before he can kill Mary, we hear that his captors hinted that the “English woman” betrayed him and that they repeated the code word “ammo”… but then the police enter and shoot Ajay.

Who do those hints lead to then? Lady Smallwood, code name Love, i.e. “amo” in Latin. She was A.G.R.A.’s conduit to the British government and set up the Tbilisi mission. Smallwood and Mary are not the only ones who have been lying, though: John has indulged in a texting flirtation with a woman since Rosamund the baby was born. Why this is thrown in to the episode is unclear, but given that this is Sherlock, it’s not a stretch to assume this woman will soon play a bigger role. (Notice also the poster next to her at a bus stop, which depicts the villain of the next episode, Culverton Smith. It looks like he’s on TV or in movies.) 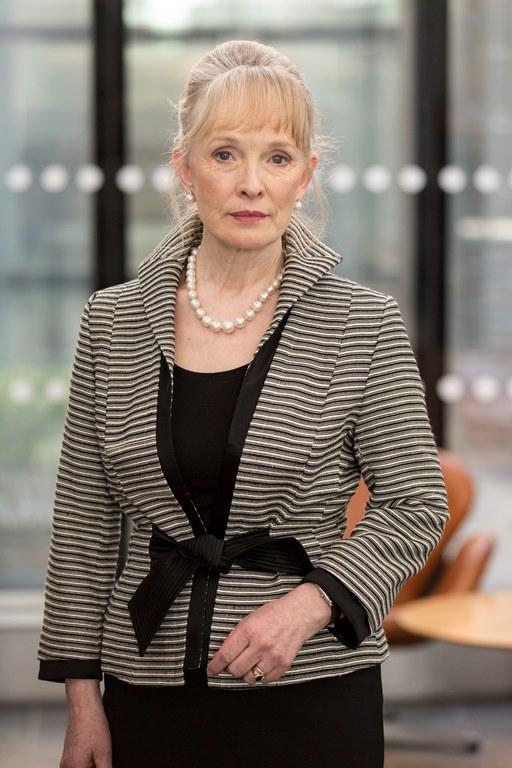 Lady Smallwood is a culprit. (Hartswood Films and MASTERPIECE) Smallwood is another red herring. The culprit is actually the secretary, Vivian Norbury, with whom Sherlock bantered at the beginning of the episode. She knows everything Smallwood knew, and had more reason to betray A.G.R.A. She has been selling secrets to supplement her salary and prove to herself that she’s smarter than her higher-ups. The Georgian ambassador found out, so A.G.R.A.’s mission to save the ambassador had to fail.

Sherlock alerts Mary and John and goes to confront Norbury at the aquarium, where she likes to spend evenings. Knowing she’s been found out, she tells the merchant and death story, surrounded by sharks in tanks. Fate is knocking. Mary arrives, Norbury pulls a gun. Sherlock, believing he is above fate and danger, attempts to talk Norbury down. But he’s too clever and riles Norbury. She shoots him.

Whereas the last time Sherlock was shot he had to save himself, this time his former shooter keeps him alive. Mary jumps in front of the bullet. John arrives. Mary dies in his arms. John lashes out at Sherlock−he didn’t keep his vow.

Mary dies in the Conan Doyle stories, though off-page. Speculators therefore guessed that she would die in Sherlock; after all, her dark past had to catch up to her. But dying to protect Sherlock? I don’t think people anticipated this. And while deaths in Sherlock are rarely final, this one seems irrevocable. Mary tried to outrun her fateful past and Sherlock’s arrogance has now killed her, point-blank. John once again has to endure the death of a loved one. Shattered, he blames Sherlock and rejects him from his life. Given that John never stays angry at Sherlock, this is unlikely to last, especially since it seems to be partly a redirection of John’s anger at Mary for her lies, and partly a reaction to his own guilt over his texting flirtations.

Sherlock may finally be reckoning with his actions and emotions. He is in therapy, and has requested that Mrs. Hudson mention “Norbury” if he ever gets cocky. Mary has one final request of Sherlock, sent to him in a video labeled “Miss me?” (Of course Gatiss and Moffat left Moriarty out of the first episode. As usual, cliffhangers abound; see also Mycroft’s call to “Sherrinford,” a name that fans have speculated refers to a third Holmes brother.) She needs him to “save John Watson.” 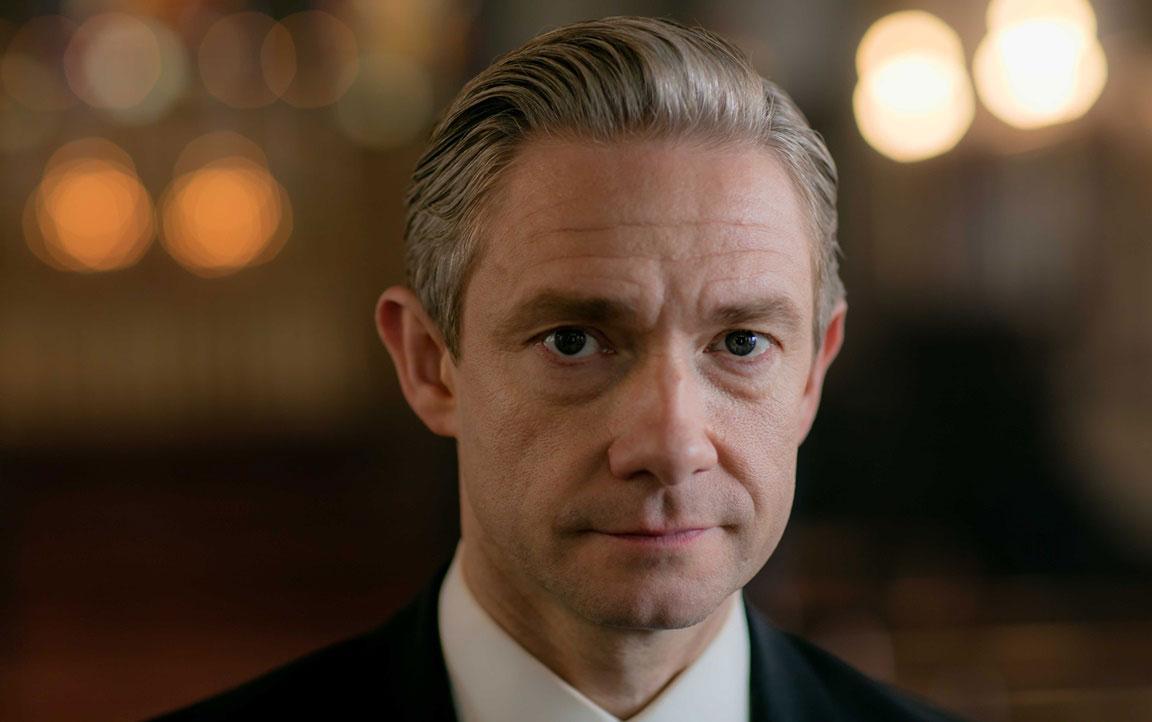 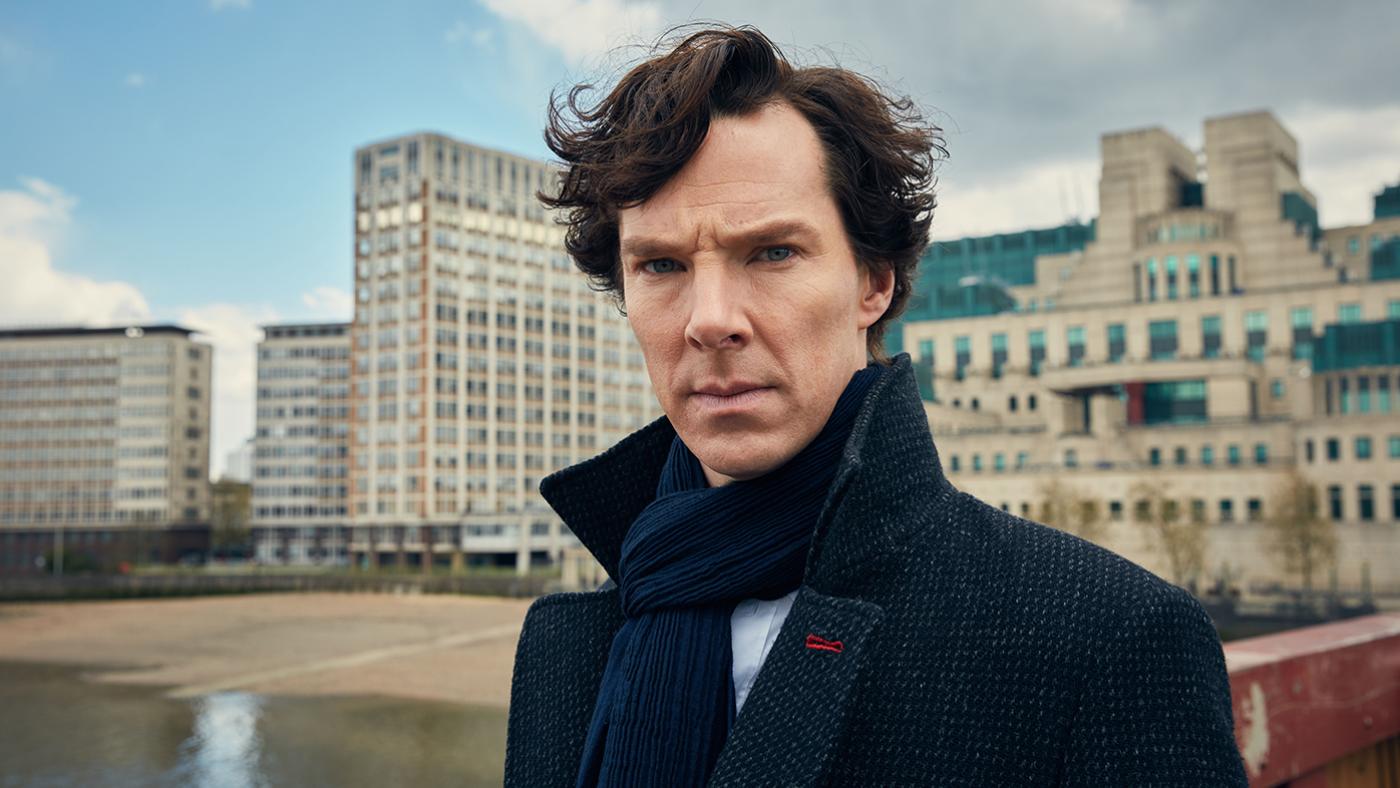 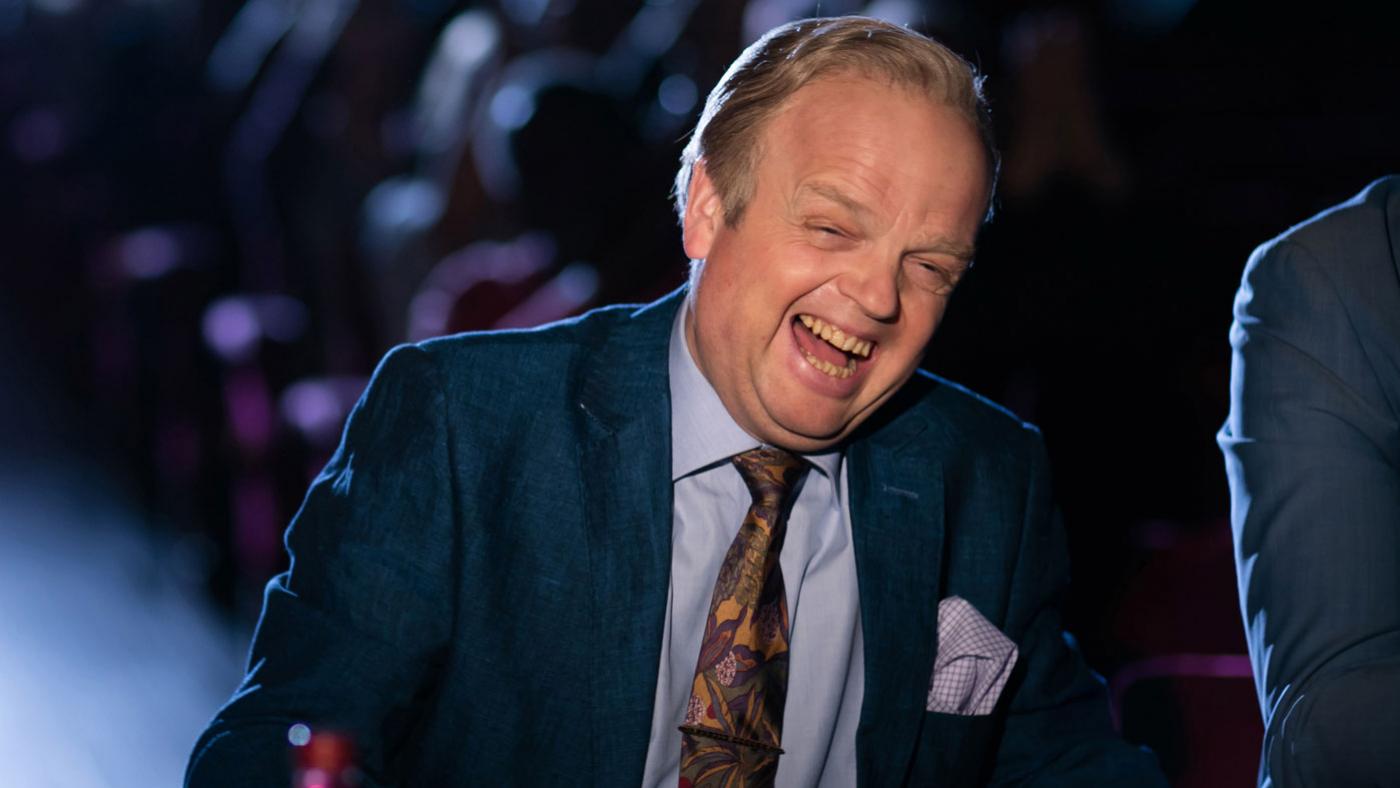