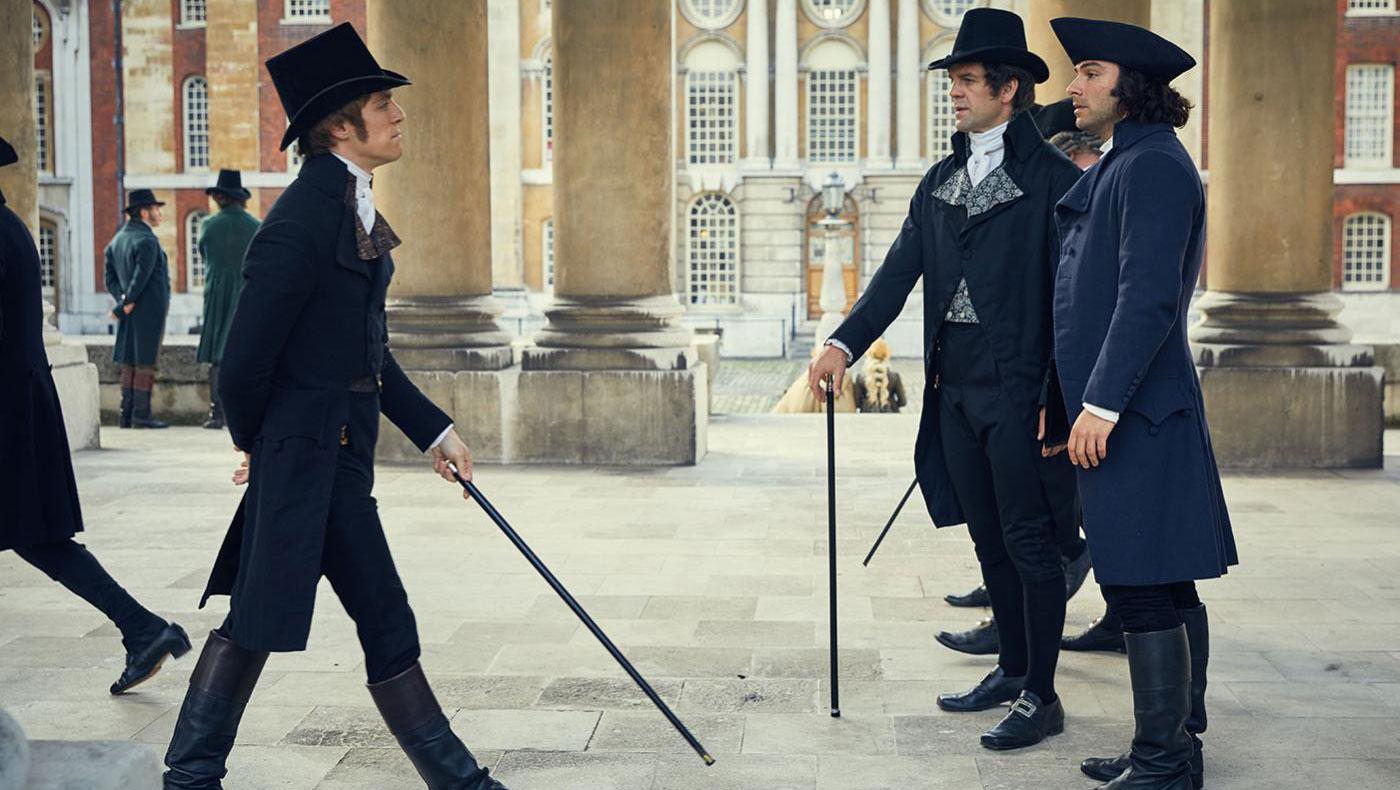 Ross's advocacy for liberal policies in Parliament is not making him many friends. Photo: Mammoth Screen for BBC and MASTERPIECE

Demelza and the children frolic on a gray, windy beach as we dissolve to Ross in the House, passionately advocating for the poor. George, back in Westminster as he had hoped, serves up his trademark sneer, and most of the other Members seem indifferent.

Too bad, because back in Cornwall, famine and fever are rampant, and as Demelza, Dwight, and Sam attempt to help the desperate villagers, Sam can’t see what good Ross is doing them in Westminster. Ross has been wondering the same thing.

Caroline, in London, invites Ross to a big soiree she is throwing. She has been running with a bad crowd that includes Monk Adderley, who rubs Ross the wrong way.

Dwight, treating Morwenna at the vicarage, asks her why she threatened to harm her son. Morwenna assures him it was a bluff – “the only weapon she has against [her] husband’s attentions.” Ossie, meanwhile, is paying those “attentions” to Rowella – as she flaunts her bare feet, angling for new slippers, he angrily threatens to halt his visits; Rowella feigns indifference while pocketing his money.

Demelza pushes Drake to make a commitment to Rosina. Drake does not love her, but since Morwenna is off limits, Demelza argues that perhaps Rosina will grow on him. A few days later, Drake does approach Rosina, and after making it clear that he would be settling for her, asks her to marry him. Rosina inexplicably responds to this romantic proposal by saying, in effect, “Sure! Where do I sign up?”

Ross asks his London housekeeper for a nearby poorhouse he can visit and is surprised to learn that her son lives there – he has wages, just “not enough to live on.” Ross is appalled by the conditions there, but his colleagues have scant empathy.

Morwenna is playing with John Conan when Ossie, citing Morwenna’s continued resistance as proof that she can’t be trusted with the boy, orders the scary governess to separate him from his mother. Morwenna is bereft. That evening, she is reading in bed when, to her horror, Ossie slithers in, informing her that now that their son is safe with the nurse, Morwenna must “do her duty and submit” to him. Mercifully, we cut to…

Caroline, living it up at her extravagant London party. Ross, keeping a weather eye on her, has little use for her shallow city acquaintances. Case in point: Adderley enters, followed by Elizabeth and George, who snub Ross as usual and chat among themselves. Adderley, with clear ulterior motives, brings up Ross and Elizabeth’s meeting in the garden at the Trenwith reception; this is news to a livid George. Elizabeth glares as Adderley glides off, leaving destruction in his wake. Caroline tries to persuade Ross to stay later, but he demurs and we get a glimpse behind her brittle façade before she determinedly wades back into the crowd.

Back at Nampara, Demelza and Dwight are taking inventory of food they have collected for the poor. As Prudie glowers, Dwight confesses to Demelza that Nampara feels more like home to him than his own empty, silent one. Had Ross and Caroline met each other first, Demelza wonders, would they have been a better match? “Would we?” asks Dwight. It’s a light exchange, but also a charged one, interrupted by Sam gleefully announcing that Drake and Rosina are engaged.

That evening, Rowella is polishing a new brass candlestick – her husband Arthur wonders how she afforded something so fine. She hurries him out the door for his regular family visit, but Arthur runs into Dwight, who advises him to postpone as his sisters are ill. Arthur arrives home early to find the front door locked. Through a window, he is devastated to discover Rowella and Ossie in the act.

Cut to Caroline and Adderley playing roulette. Caroline is losing and Adderley, a bad influence, encourages her to keep playing. Ross disapproves of people “with nothing to lose assisting others to lose all they have.” Fisticuffs are forestalled by Geoffrey Charles, hammered, being shaken down by two arrogant young aristocrats. Ross intervenes, and Geoffrey Charles vomits on the carpet. A young servant cheerfully cleans up the mess, explaining to Ross that such tasks help him make ends meet. Latching on to this idea, Ross suggests to Bassett that higher wages (plus gratuities from the gentry) would eliminate the need to fund poorhouses. (This would seem like common sense, but…)

Letters continue to fly back and forth between Ross and Demelza – Ross’s liberal crusades are not making him many friends, and in Sawle, Demelza is flashing back to the death of their first child Julia. Ross discusses this with a still-raw Caroline, who doesn’t want to hear it. Ross gently explains that “we are taught to be strong, but tears must fall.” Caroline’s self-control begins to erode.

In bed at the vicarage, a sweaty Ossie rolls away from Morwenna, baffled and irritated by her unresponsiveness. Morwenna, staring at the ceiling in tears, couldn’t care less. That night, Rowella again hits up Ossie for cash, but now that he has Morwenna to fulfill his “needs,” he’s done with her. Riding home in the dark, he is suddenly confronted by a masked Arthur, flailing at him with the brass candlestick. In the struggle, Ossie falls from his horse, one foot stuck in the stirrup. The horse suddenly bolts, dragging him screaming into the woods, where his head slams into a tree. Panicked, Arthur flees. As he arrives home, Rowella takes in Arthur’s blank stare, bloody face, and the candlestick in his hands, and guesses what has happened. 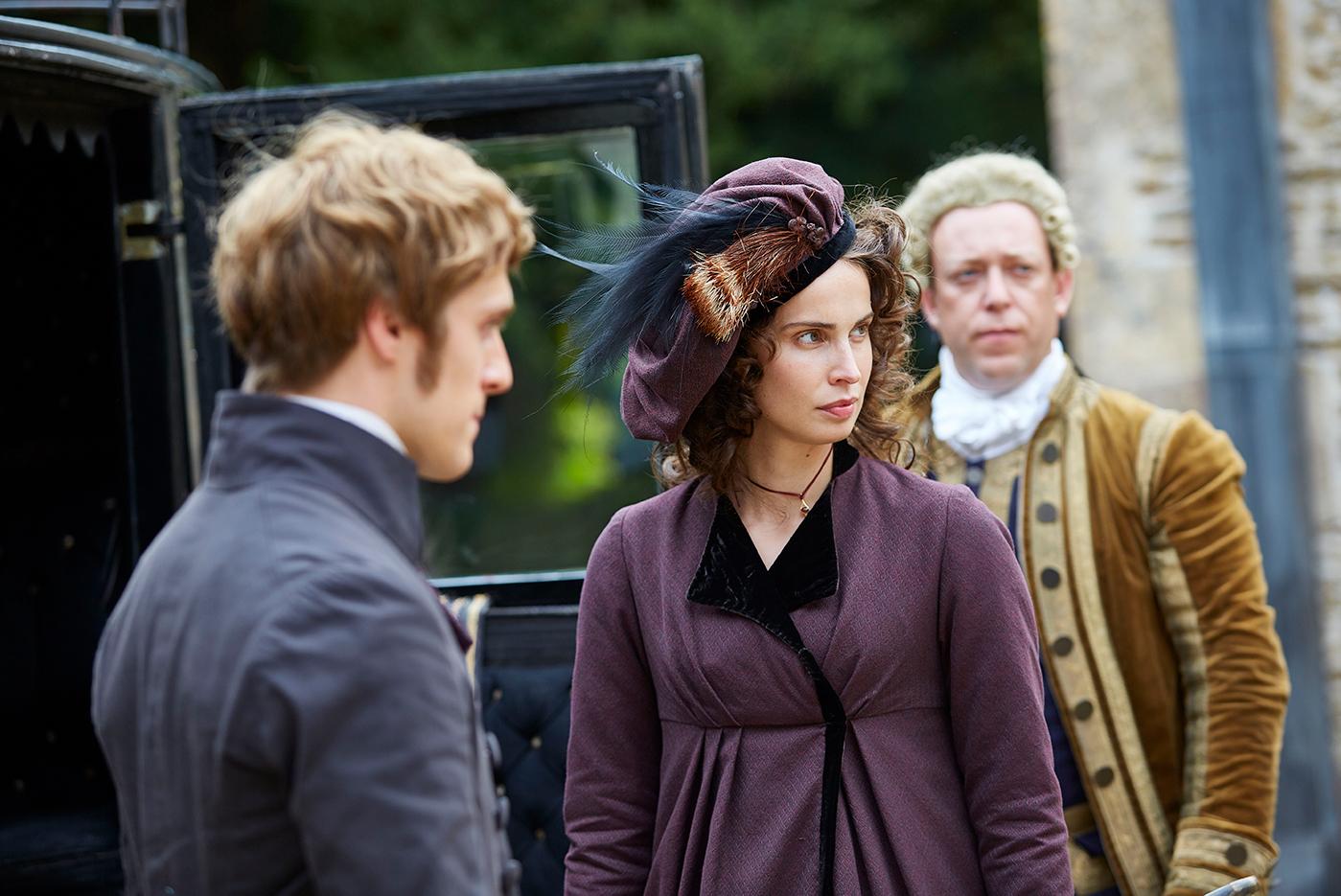 A sudden turn of events causes Morwenna to finally unload on George and Elizabeth for the misery they have caused her. Photo: Mammoth Screen for BBC and MASTERPIECE

Meanwhile, Drake and Demelza are happily preparing his cottage for Rosina; the wedding is tomorrow. The following morning, Ossie’s body is found. We see a montage of Dwight conducting an autopsy as Lady Whitworth cries murder; a catatonic Morwenna; Rosina and her bridesmaids skipping to the church, and a distraught Drake after Demelza breaks the news. As Morwenna is now free, Drake feels he can’t marry Rosina. Regretfully, he goes to the church to tell her – and then disappears.

Dwight, in his garden, envisions a ghostly Caroline cradling little Sarah. They morph into an approaching and upset Demelza – Drake has fled, Rosina is jilted, Rosina’s father Jacka is on the rampage, and half the village is in an uproar. Dwight draws her into a comforting embrace – Ross should be here, he tells her. “And Caroline,” Demelza adds tearfully. In London, Ross pleads with Caroline to return with him to Cornwall (and Dwight). Caroline isn’t ready yet, but she’s getting there.

Cut to Ossie’s wake as Elizabeth and George express sympathy for Morwenna’s “loss.” Satisfyingly, she unloads on them – they forced her to marry Ossie and ruined her life. Elizabeth is stricken; George – for once – is speechless. Later that day, Drake tries to re-up with Morwenna but she rejects him (“I’m tainted!”) and Lady Whitworth runs him off the property. George jumps to the conclusion that Drake was complicit in Ossie’s death and sends his thug Harry to Nampara to arrest him. As Harry attempts to gain entry, Prudie wallops him with a broomstick and she and Demelza drive him from the house.

After Harry tattles on them, an angry Elizabeth makes George promise not to pursue Drake. George reluctantly agrees, but gives Harry tacit approval to “punish him in other ways.” That night, Harry and Jacka set fire to Drake’s smithy. Demelza and Sam are surveying the wreckage when a weeping Drake appears, devastated not by the loss of his forge but by Morwenna’s rejection. Later, we see Morwenna sadly tossing Drake’s precious shell bracelet into the sea.

Ross, newly returned to Cornwall, shares with the local landowners his proposal to grant a temporary subsidy to the poor. George, of course, scoffs at paying the poor to be idle (welfare queens, anyone?). A vote is taken and Falmouth surprisingly sways the decision Ross’s way – if Ross will vote for the road he wants. After insuring that the displaced residents will be rehoused at Falmouth’s expense, Ross agrees. The next day, he heads back to Westminster to make his case for the subsidy. Some of the other Members, especially George, are not fans. But others are intrigued, including the Prime Minister, who wants to hear more of Ross’s “interesting ideas.”