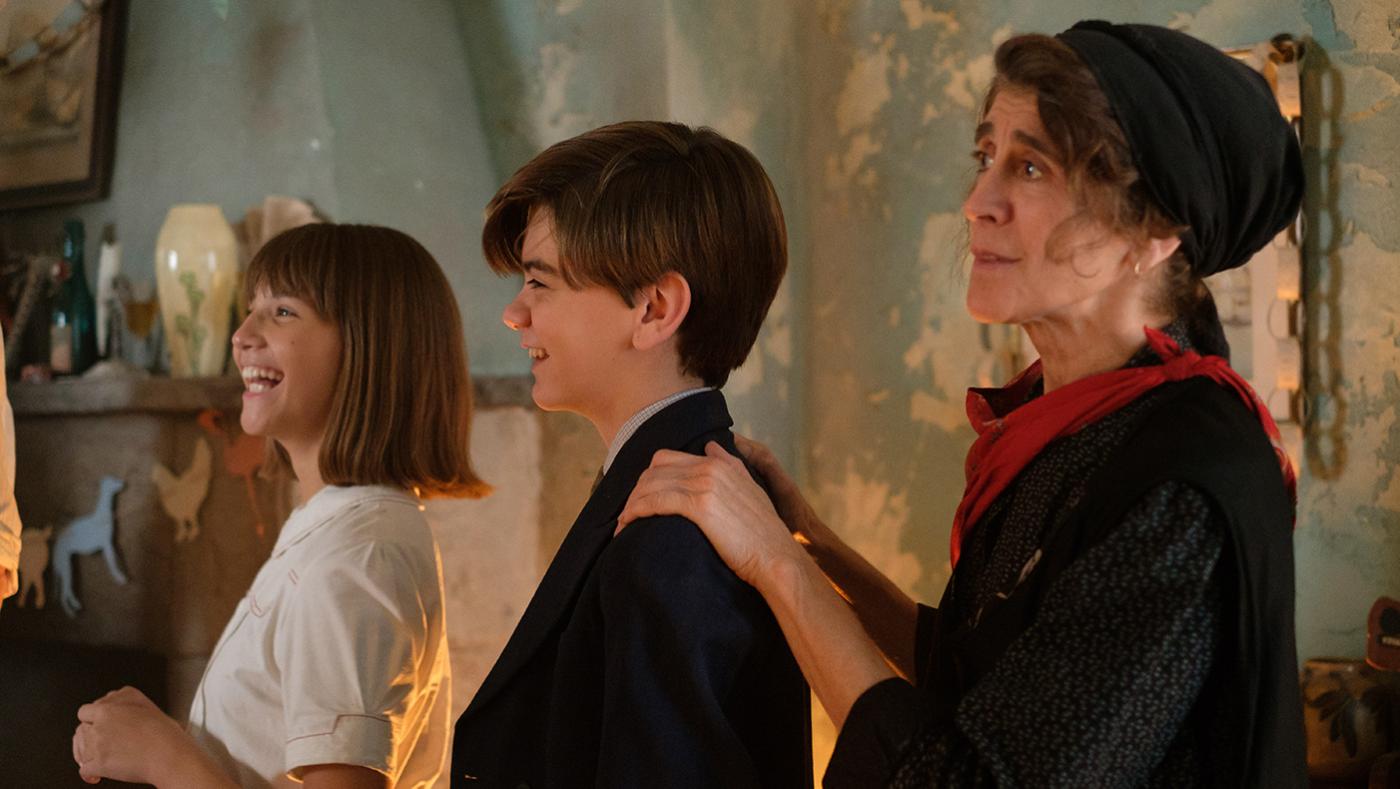 Louisa throws a party for Gerry tailored for a child, but he's growing into a teenager and only enjoys himself once his new friend arrives. Photo: Joss Barratt for Sid Gentle Films & MASTERPIECE

It’s Gerry’s birthday, and Louisa is determined to throw a thrilling party for her youngest child. The presence of an extraordinary swarm of bugs means the bash will have to take place inside, but no matter: Louisa still has games and speeches and a massive table of refreshments planned. Too bad Gerry doesn’t want any of it. He’s becoming a moody teenager, and Louisa’s maternal fussing is as annoying as the flies buzzing around outside and as suffocating as being stuck indoors.

Gerry’s not the only one in a bad mood. Spyros is also uncharacteristically reticent, but he won’t tell anyone why. He and Gerry make a melancholy counterpart to the increasingly boisterous party, which is attended by all of the Durrells’ acquaintances: Florence and Dr. Petridis, plus their seventeen-year-old niece Nelly; Theo; Lugaretzia; the priest Pavlos; Gerry’s old tutor; Louisa’s old crush Sven and his boyfriend; and the current partners of Margo and Leslie, Zoltan and the pregnant Daphne.

Abetted by alcohol, all the guests are having a grand time with the silly games – except Dr. Petridis, who is continually pulled aside to examine a medical ailment. When the time for speeches comes – the Durrells tell made-up stories about Gerry because they can’t remember any funny anecdotes – and Louisa accidentally says Gerry is turning 12 instead of 13, he finally lashes out. He’s furious that Louisa keeps treating him like an infant, a point supported by her gift of a stuffed animal. Indignant outburst over, he stomps upstairs and locks himself in his room.

You should have realized Gerry has grown up, Florence tells Louisa. “He’s been the most mature member of your family for years,” she says, with a telling glance at the antics of Louisa’s other children as the party games resume. Larry further demonstrates Gerry’s growth by showing Louisa a story Gerry wrote when they first came to Corfu and one he wrote recently: he’s developing into a great writer.

Spyros follows Gerry to his room so that they can share their misery. Spyros says he feels old and that people around him have suddenly changed; Gerry is feeling the opposite, that he’s changing as he leaves childhood behind. 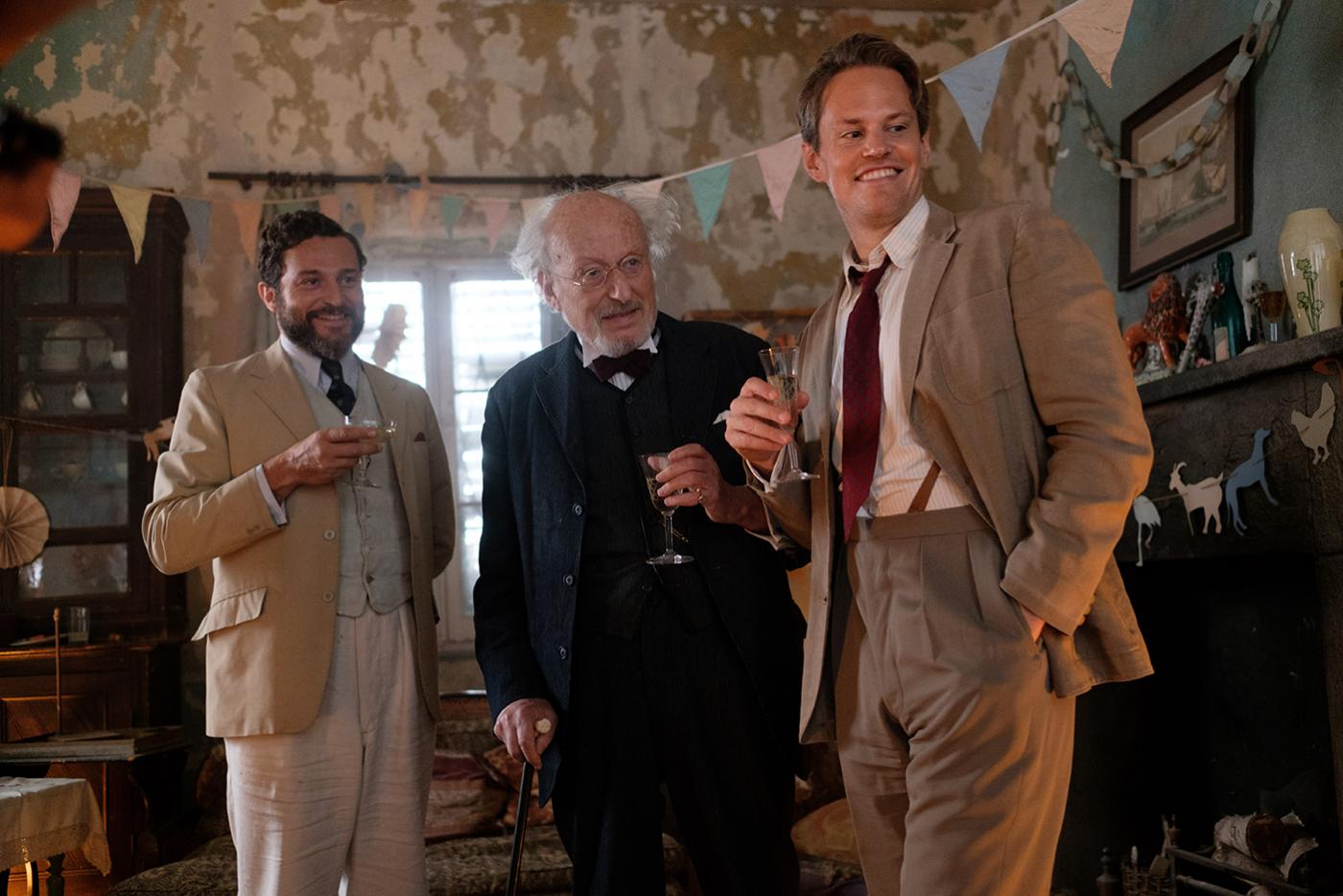 It's a motley crowd at Gerry's birthday party, one not especially suited to a 13-year-old boy. Photo: Joss Barratt for Sid Gentle Films & MASTERPIECE

Gerry kicks Spyros out when he picks up a guitar and warbles out a lament in Greek.

Spyros makes his way to Larry next, who tries to be sympathetic but also wants to escape the singing. Larry finally gets Spyros to explain his sorrow: his wife has left him and taken the children.

Leslie is finally beginning to look forward to his own impending child. He has been reading books about pregnancy so that he can help Daphne. The two have begun to enjoy each other’s company, and even, dare they say it, fall in love.

Louisa tries to make amends with Gerry by apologizing for babying him, and begins to overcompensate in the opposite direction by giving him beer (which he finds disgusting) and cigarettes. She even tries to set him up with Florence’s niece Nelly, once again embarrassing him.

He only begins to enjoy himself once his new friend Galini shows up. Together they join the party, which is in full swing. Enticed by the revelry, Dr. Petridis finally refuses to check any more ailments – but as soon as he joins the fun, Florence pulls him home; she’s exhausted.

As everyone dances around the room, a sheet of paper drops from Gerry’s pocket. Larry and Louisa pick it up, and discover that it’s an angsty poem about feeling suffocated by Louisa. But Gerry has moved past his frustration, and, thanks to Theo, seen that Louisa simply loves him a lot. He writes a new poem in appreciation of her and apologizes.

Despite this reconciliation, Louisa is feeling down as she watches all her children partner off and be happy (even Larry enjoys a little romp with Nelly). Having learned of Spyros’s situation from Larry, she tries to comfort Spyros and let him know that he can confide in her, but he just sulks off into the night. Later, however, he returns to the Durrell house and opens up to Louisa about how he blames himself. That simple confession over, he leaves. Both perhaps feel slightly less alone.