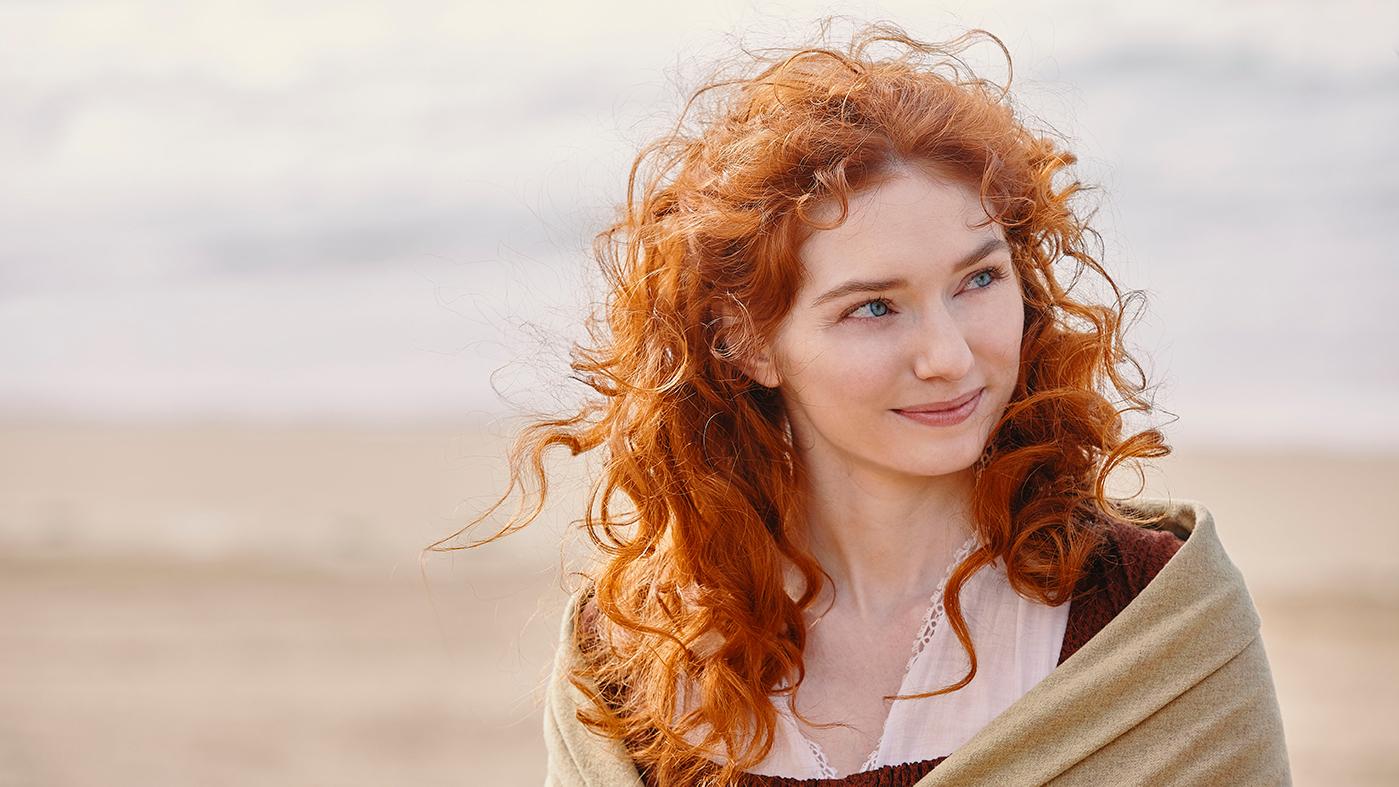 Demelza believes she, Ross, and their friends are being followed and observed. Photo: Mammoth Screen

In London, Demelza and the children are reunited with Ross and some unexpected houseguests – Kitty and Ned. While strolling in Hyde Park, Ned, still steamed about his false imprisonment, loudly vows revenge against “that bastard Hanson.” One source of his frustration: Ned’s former secretary (and possible character witness) James Bannantine has suddenly vanished. Among the trees, an unknown man is eavesdropping.

Cut to George, Cary, and Hanson, who is outlining his business holdings and need for an investor. “Is slave labor a concern?” asks Hanson. George shrugs. “Why would it be?” Meanwhile, in another part of town, Geoffrey Charles tries on his flashy new military school uniform and trades friendly banter with Cecily through a window.

Cary is relieved that his nephew seems to be recovered, but George, in denial, is anything but – Elizabeth’s ghost is everywhere.  Back in Cornwall, young Valentine is morosely playing alone; his nanny only has eyes for baby Ursula. Morwenna and Drake continue to struggle with intimacy, and Tess’s brazen insolence and acquisitive nature are proving to be a headache for Prudie, left in charge of Nampara in the family’s absence.

Ross, Demelza, the Despards, and the Enyses take an evening stroll through Vauxhall Pleasure Gardens, where Ned encounters Hanson, who openly insults Kitty as male passersby clap and jeer at “the courtesan.” Ned threatens Hanson, and Kitty quickly defuses the situation. Dwight worries, again, that Ned’s outbursts could be dangerous. Demelza notices a man – the same one we saw in the park – spying on them.

Also in the Gardens, a masked Cecily, trailed by her long-suffering chaperone, keeps a rendezvous with a masked Geoffrey Charles, and teasingly dares him to tell her father (Hanson) that she should be allowed to marry as she chooses. Geoffrey Charles accepts the challenge, but is intercepted by Ross – for once, the adult in the room – who advises him to steer clear.

At the magistrate Merceron’s chambers, Ross and Ned plead Ned’s case, but Merceron can’t do much to help without Bannantine’s testimony; they must notify him immediately if Bannantine is found. Ned characteristically spouts off and Ross rushes him out. Later, as they fence, Ross admonishes Ned for his recklessness. (Pot, meet kettle.) 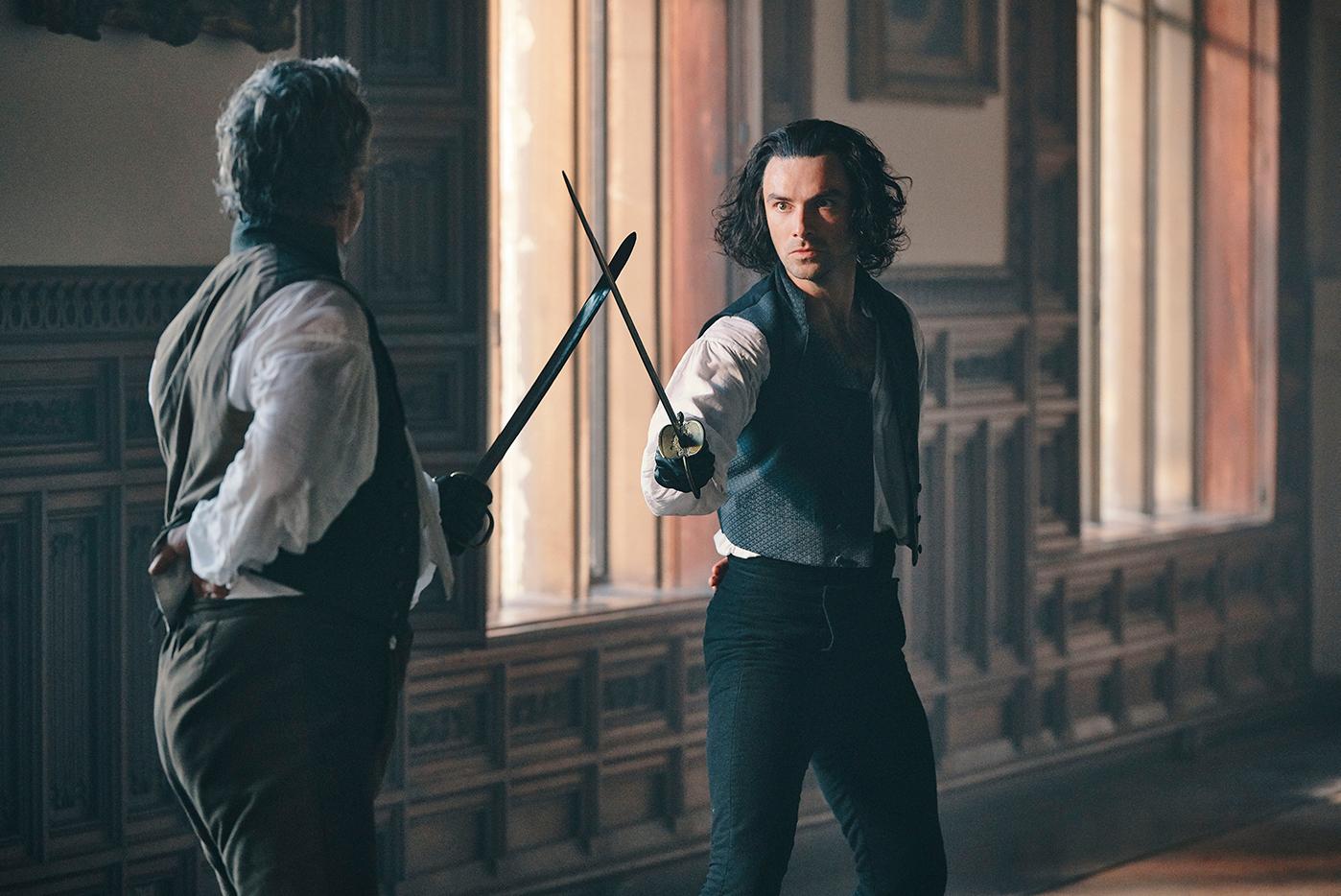 Ross continues to stand by his friend Ned despite his frequent outbursts and warnings against helping him.Photo: Mammoth Screen

As Caroline looks on in the audience at the Royal College of Surgeons, Dwight lectures on the treatment of mental illness, controversially arguing for kindness and patience toward the afflicted. When Caroline asks his views on James Hadfield, the King’s would-be assassin, audience member Thomas Erskine* volunteers that Hadfield had suffered head injuries while defending the Crown. If that’s true, Dwight comments, the man may not be responsible for his actions. Erskine is intrigued, and no wonder; he is Hadfield’s attorney. Later, Dwight and Erskine observe the obviously bonkers Hadfield in prison, and as a guard eavesdrops, Erskine asks Dwight to testify in Hadfield’s defense, a move that could get him in trouble with the powers that be, who want Hadfield to hang.

The next morning, at Ross’s very crowded breakfast table, he receives a note from Bannantine, urgently requesting a clandestine meeting at a local tavern. As someone eavesdrops (again), Bannantine stoutly defends Ned, but warns Ross that standing up for his friend could be unwise. Ross gets the same pointed advice from Wickham, the head of the King’s secret service. Ross, of course, ignores them both.

Demelza, strolling with the children and Kitty through Hyde Park, spots Geoffrey Charles canoodling with Cecily; concerned about the girl’s close connection to Hanson, she warns them to be discreet. Leaving, she spots someone observing them, and later, tells Ross she’s sure they’re all being watched.

Back in Cornwall, Drake and Morwenna spot Valentine wandering alone on the cliffs – he insists to them that his father promised to bring his mother back. While the couple is processing this bizarre claim, the nanny catches up with Valentine and he runs off.

That night in London, Ross receives Bannantine’s written account backing up Ned’s claim of innocence. Ross has pamphlets made of the statement and covertly circulates them among his fellow MPs, other sympathizers, and an avidly interested Merceron. Meanwhile, unbeknownst to Ross, Demelza, Kitty, and Caroline are also innocently distributing the pamphlets in Hyde Park to anyone who’ll take them. Ross is dismayed – they could now all be in danger. Wickham reinforces this, telling Ross that he and Dwight “consorting with known Jacobins” has embarrassed the Crown.

At Hadfield’s trial, Dwight testifies for the defense. Hadfield is acquitted by reason of insanity, but will still likely end up in an asylum. The onlookers, out for blood, are outraged, while Dwight regrets intervening – “Execution would be kinder.” Afterward, George, Cary, and Hanson scheme to frame Ned, Dwight, and (of course) Ross for treason. On the verge of signing Hanson’s partnership contract, Elizabeth makes another starring appearance in George’s head, and Cary once again stops the proceedings. They hastily depart for Trenwith with George chatting animatedly with an invisible Elizabeth in the carriage. Arriving home, he and Cary are greeted by a baffled Valentine. Where is his mother?

To appease the Crown, Wickham demands that Ross spy on Ned and Kitty; instead, Ross and Demelza decide to take them back to Cornwall with their family for safekeeping. No such luck: Hanson – with Cecily – is also headed there, to try again to seal the deal with George and Cary. They all, including Geoffrey Charles, converge during a stopover in Truro, and there is friction.

Relieved to be home, the Poldarks, Enyses, Carnes, and Despards enjoy a lighthearted picnic on the beach. But clearly, there is trouble afoot as we cut to a dead body floating in the Thames. It’s Bannantine.

*Thomas Erskine, another real-life character, was a leading barrister of his day and attorney for would-be royal assassin James Hadfield.