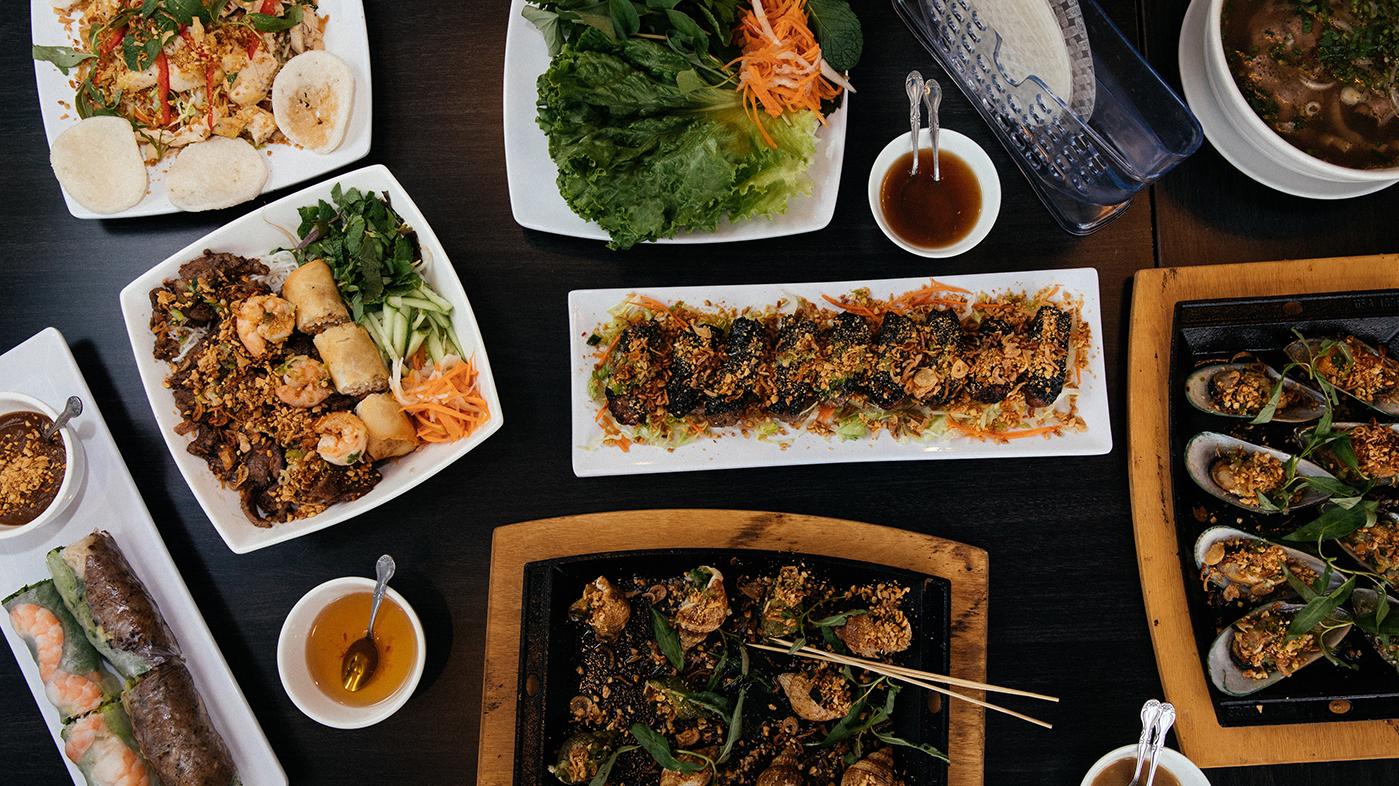 Find stories about some of LC Phở n Grill’s neighboring restaurants and information about a food tour at wttw.com/nopassportrequired.

When LC Phở reopened earlier this year after remodeling, it added not just more space but also “Grill” to its name. To most ears, the generic addition is easily missed—how many restaurants are called that? But for LC Phở n Grill, it’s an important addendum. The flavorful soup phở is no longer necessarily the star here; the revamped menu now features numerous less common Vietnamese specialties that gain a sweet hint of smoke from their time on the grill.

You can taste it in the bò lá lốt, plump betel leaf-wrapped ground beef and pork sausages that you eat with rice noodles or wrapped in rice paper with herbs and vegetables. It’s present in the chem chép nướng mỡ hành, mussels served on a hot cast iron skillet with peanuts and shallots sprinkled over them, and in the ốc nướng, sea snails plated the same way. (“nướng” means “grilled.”) LC Phở n Grill is the rare restaurant where you can actually taste the grill. 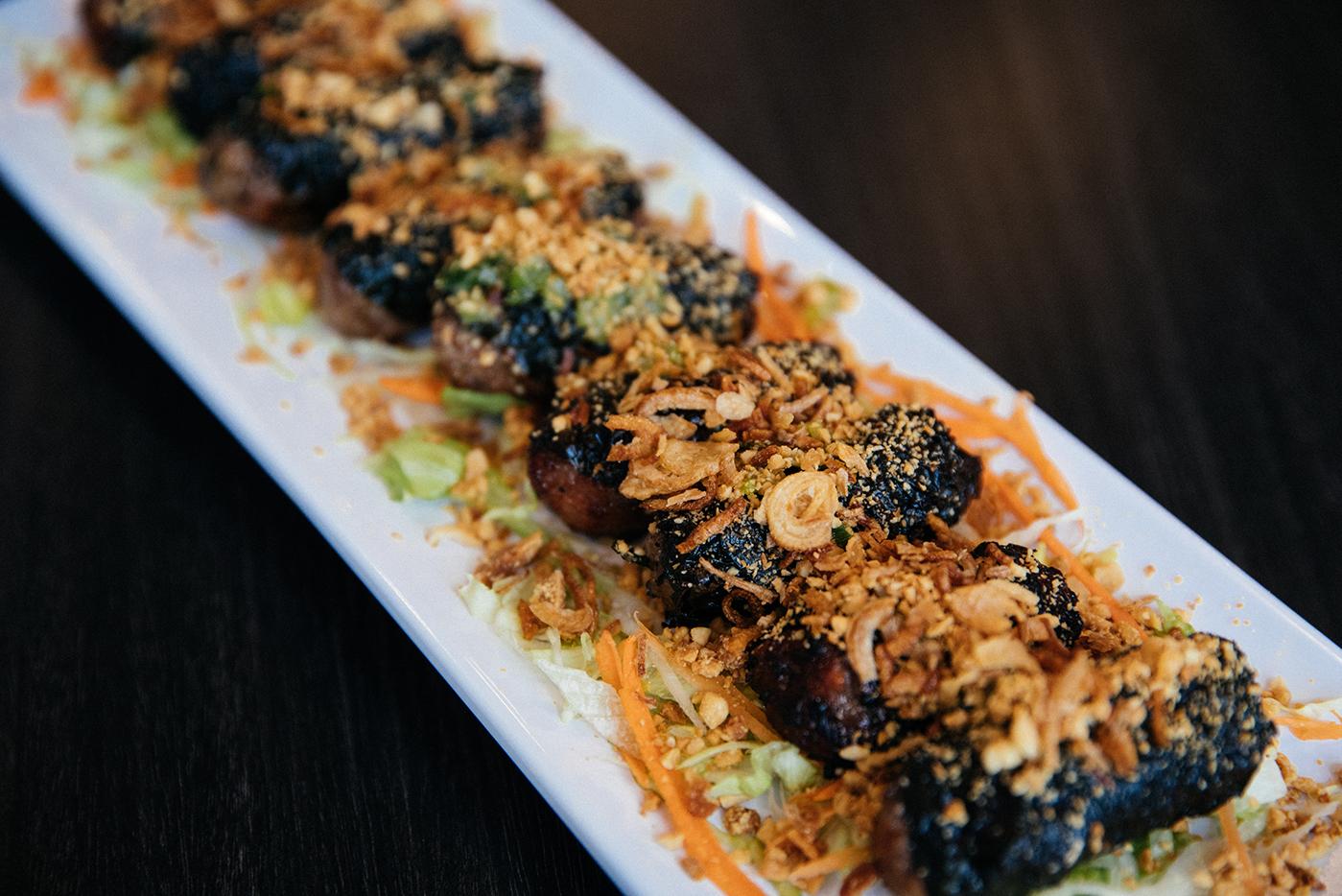 This isn’t the restaurant’s first name change. It opened at 2739 W. Lawrence Avenue in Lincoln Square as LD Phở in 2013, an outgrowth of a festival catering business called Lee Concessions run by Torrance Ly and his partner Lou Deng; the “LD” stood for both Lee Dining and Lou Deng. After two years, Deng decided to open his own restaurant and took the name with him to his new space on Kimball Avenue. Ly kept the original location and exchanged a D for a C.

The latest edition of the restaurant involves a much more radical change. LC Phở n Grill is now twice the size, having absorbed the neighboring storefront. Where it was once a tucked-away hole-in-the-wall, it is now airy and bright, with white walls and ceiling panels adorned with cloud-wafted blue skies. More importantly, Ly’s wife Lieu Nguyen has taken charge of the menu.

When Ly and Nguyen decided to expand and remodel, they also took the opportunity to reconceive the restaurant. Whereas LC Phở previously served mostly neighborhood people with its phở, bánh mì sandwiches, and a few noodle dishes, according to Ly, he and Nguyen wanted to start drawing more people from beyond the area, especially Vietnamese people. One way to do that, they determined, was to begin offering harder-to-find Vietnamese dishes that people would go out of their way to eat, like chem chép nướng mỡ hành or cá nướng da giòn, a whole roasted catfish, with skin and head still on.

“Vietnamese people love the whole fish,” the effusive Ly exclaims, explaining that it took months to find a suitable supplier for the kind he wanted. 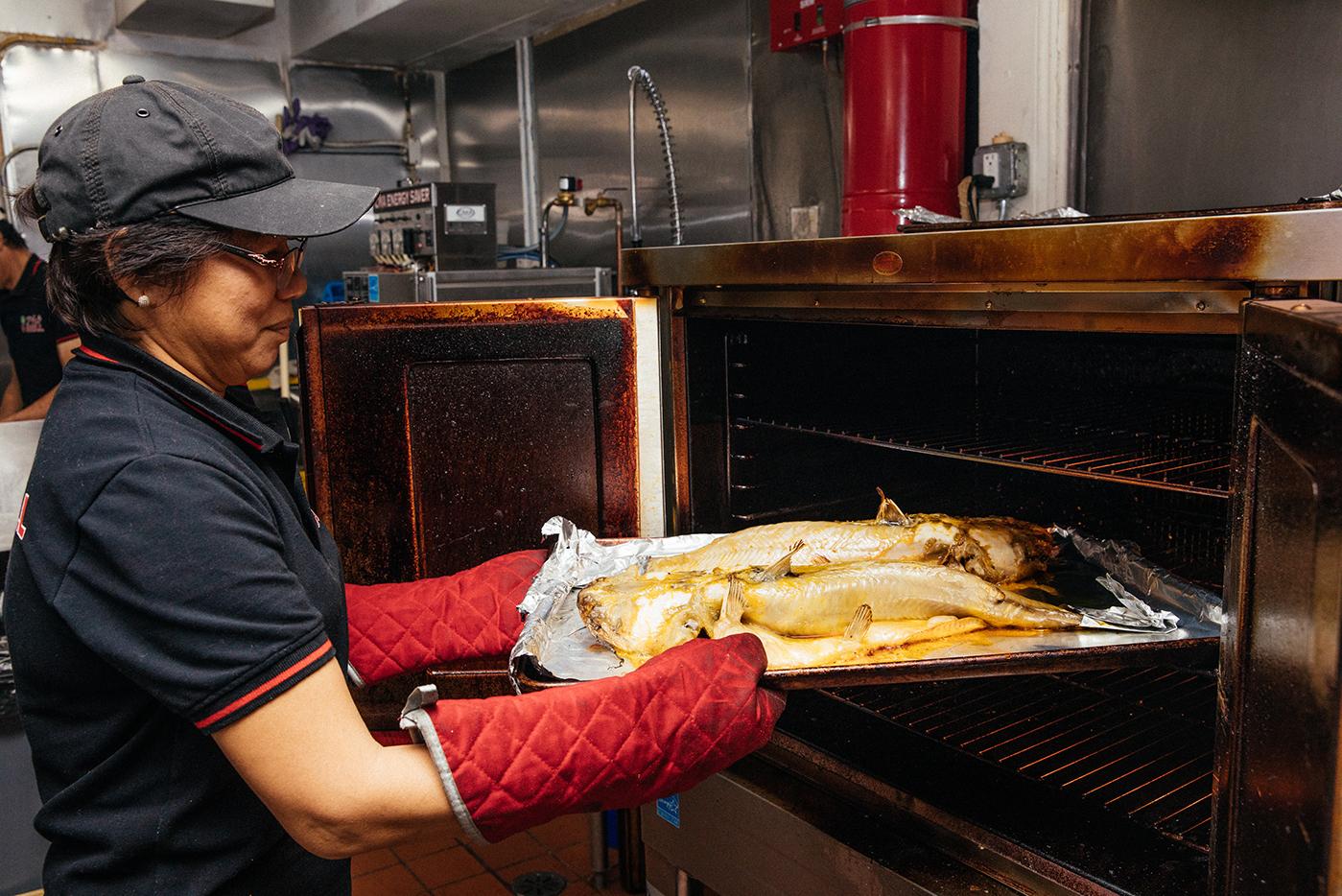 In order to learn new recipes and decide what to put on their revamped menu, Ly and Nguyen traveled last year to California, which has one of the largest concentrations of Vietnamese people in the country. Nguyen had never worked in a restaurant before, but she had always received compliments on her cooking, especially whenever she and Ly hosted parties. In California, she and Ly went to different Vietnamese restaurants around Los Angeles and San Jose to sample dishes, while she worked in some kitchens to learn more recipes and techniques.

When they returned to Chicago, they began putting together a new menu, even reinventing LC Phở’s namesake soup. “The phở is stronger now,” Ly says, enumerating the long process to make it: a day of boiling bones, followed by the addition of ginger, onion, and herbs to the stock the following day. “It has to cook for a long time for it be good,” he says.

Ly is an adaptive businessman. Born in central Vietnam to ethnically Chinese parents, he was sent to school in Saigon, as it was then called, when he was a boy. Around 1980, he and his family left for America as part of the large wave of “boat people,” refugees fleeing the weakened country after the devastation of the Vietnam War. They settled in Edgewater on the North Side of Chicago—Ly still remembers their home’s exact address—near Senn High School, which he attended, despite his very limited English. He then went to the Illinois Institute of Technology and moved to Pennsylvania after graduating. 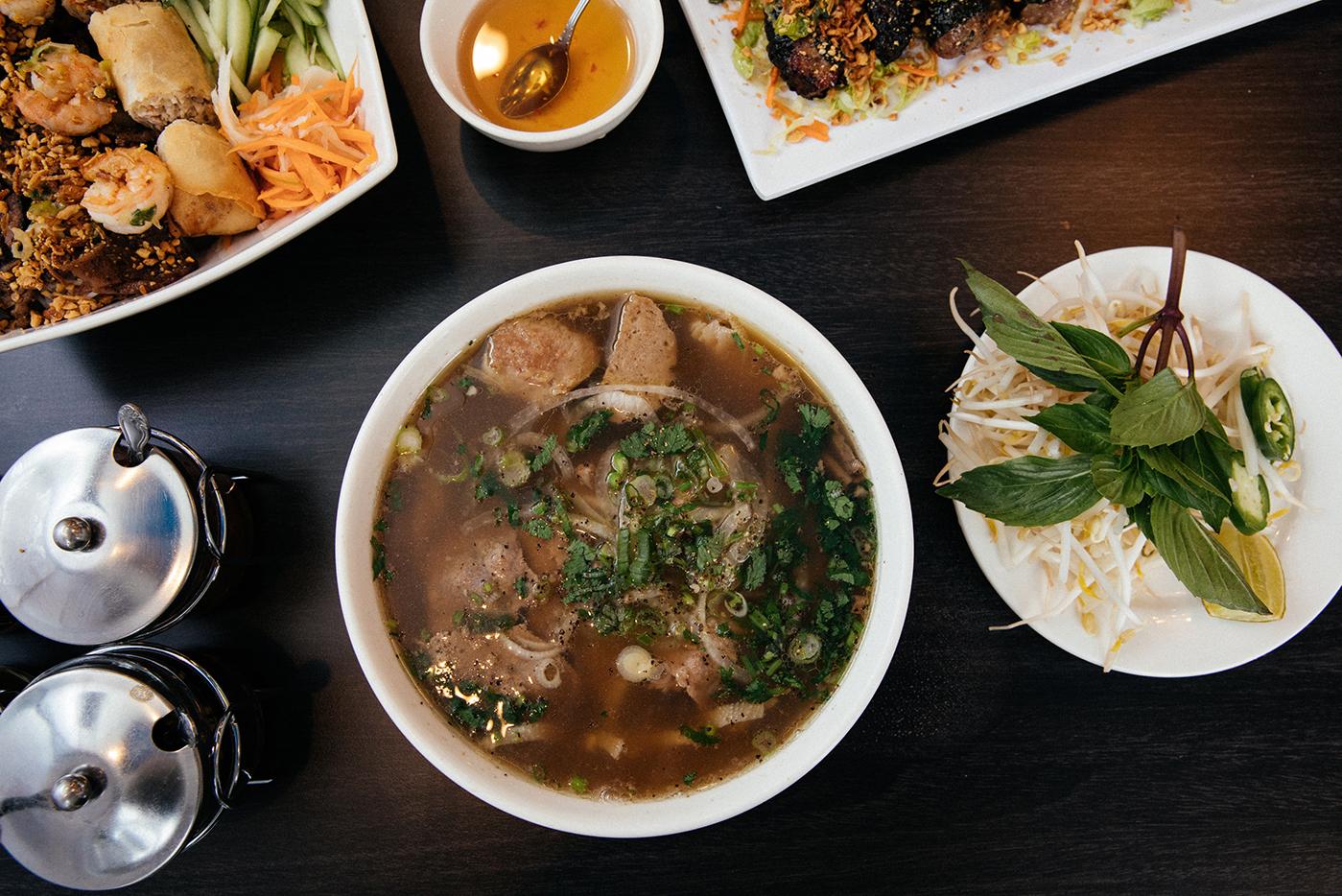 “The phở is stronger now,” Ly says of the restaurant's soup, which is no longer the sole star of the menu (phở đặc biệt pictured). Photo: Sandy Noto for WTTW

There, he opened a Chinese restaurant and began learning to cook from his chef. “Maybe I went into the restaurant business because all of my life in this country has been spent around it,” he says: growing up, he washed dishes and bussed tables to make some money. After six years and two Chinese restaurants in Pennsylvania, he came back to Chicago in the mid ‘90s and began selling food at festivals, under the name Lee Concessions. “I gave myself two years to make money, and if it didn’t work, I would go back and get a master’s degree,” he says—three of his siblings became engineers, while a fourth worked for Hewlett Packard.

But the festival business took off, and he began working some eighty events a year, everything from neighborhood street fairs to larger gatherings like Riot Fest and Lollapalooza. He followed demand and offered such fried delights as corn dogs and deep-fried Oreos—not Chinese or Vietnamese food, even of the fried variety, for instance the crisp, stuffed rice flour pancake bánh xèo that is now on the menu at LC Phở n Grill. He still works festivals, but is down to around 50 a year.

In the meantime, he met Nguyen, who came to Chicago in 2001—she was born in Cần Thơ, a city in the south of Vietnam on the Mekong Delta. Although Ly was the one who had made a career in the food business, he says Nguyen is the better cook. Take, for example, the thin rice noodles known in Vietnamese as bún, found in phở or topped with meats, seafood, herbs, a fish sauce dressing, and other goodies. “They’re hard to make,” he says with a laugh. “Whenever I cook them, she tells me, ‘too raw!’ or, ‘they’re overcooked!’ ” 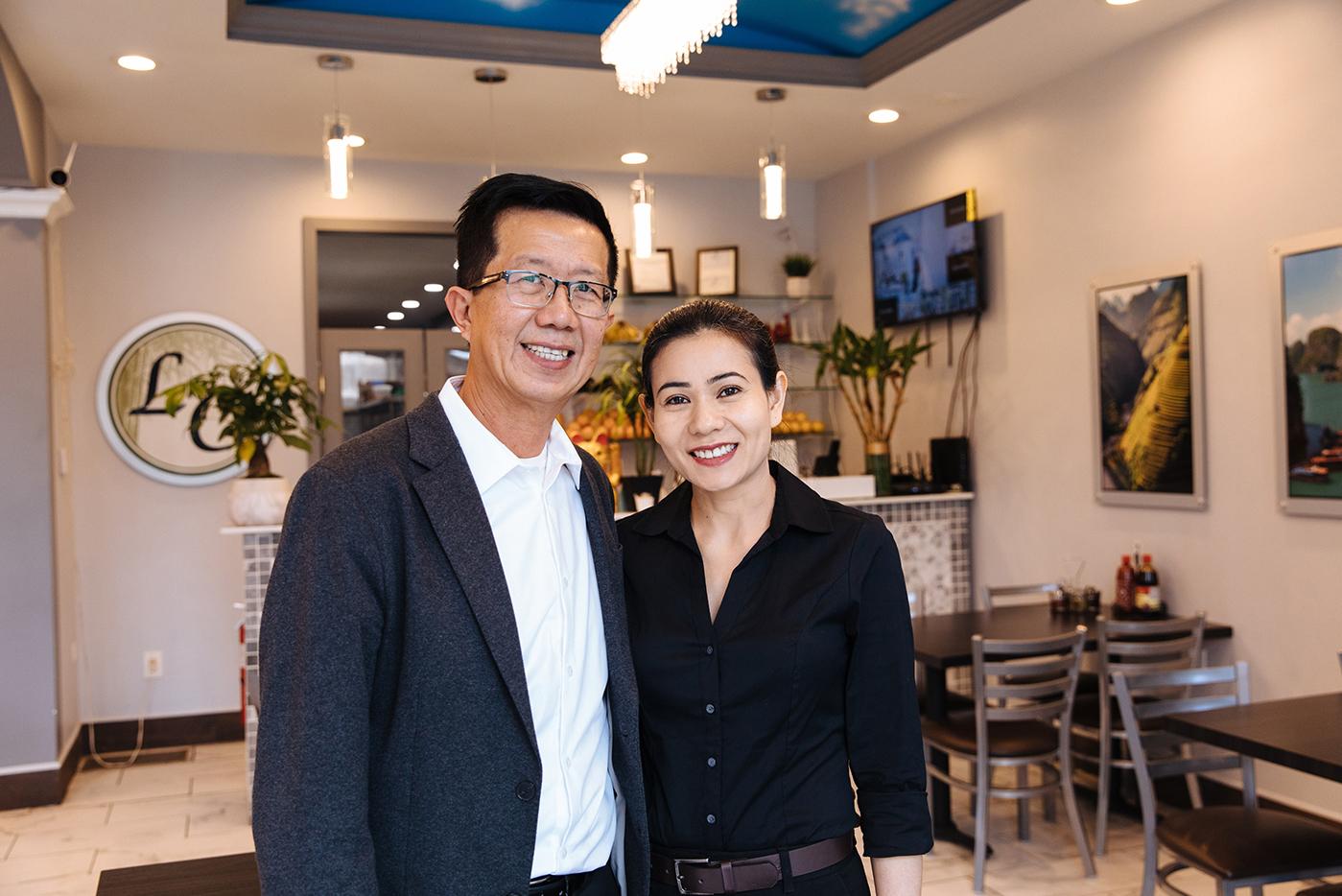 Lieu Nguyen has taken over the kitchen at LC Phở n Grill from her husband Torrance Ly. Photo: Sandy Noto for WTTW

Nguyen now runs the restaurant while Ly helps out and takes care of their two children. They live in the western suburb of Forest Park—far from the center of Chicago’s Vietnamese community on Argyle Street in Uptown, although they head there to buy ingredients for the restaurant from the specialty markets. And while LC Phở n Grill is two miles almost directly west of the Vietnamese hub on Argyle, it’s not the only Vietnamese restaurant in the area: the cherished bánh mì purveyor Nhu Lan Bakery is just down the street.

Vietnamese people first began coming to Chicago in significant numbers in the mid-1970s. Like Ly’s family, many of them were refugees from the Vietnam War. Resettlement agencies placed many of them in North Side neighborhoods, especially around Uptown, and soon they began turning Argyle Street into a bustling business thoroughfare, helping to revitalize the struggling area. 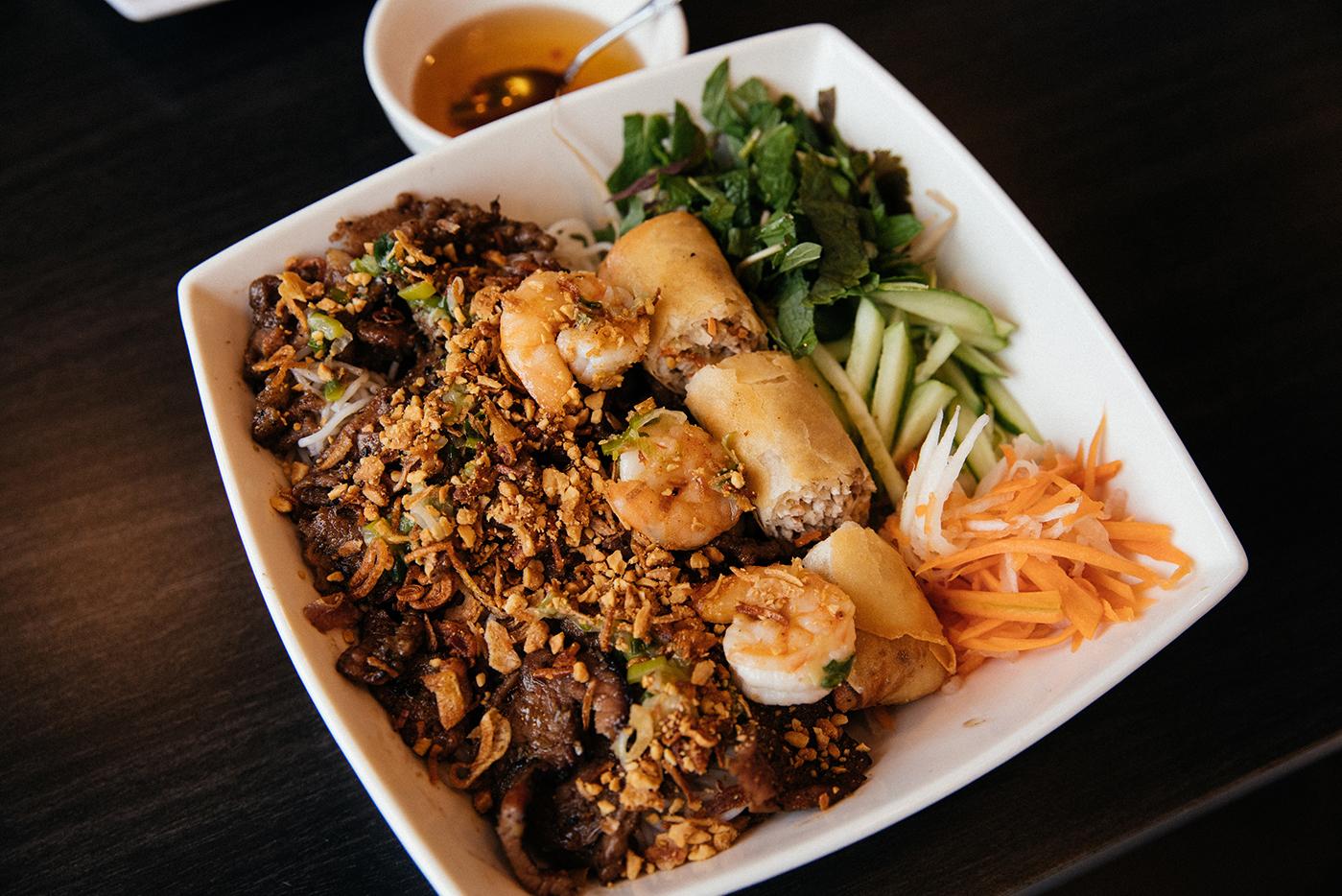 Ly says Nguyen is the better cook: he can never make bún, rice noodles used in dishes like the pictured bún thịt nướng, to her standards. Photo: Sandy Noto for WTTW

Decades later, there is an increasing interest on the part of non-Vietnamese Americans in Vietnamese food, especially phở and bánh mì, as evidenced by the popularity of places like Nhu Lan and Tank Noodle. In 2017, the respected Vietnamese-born chef Thai Dang and his wife Danielle opened HaiSous, which has since garnered acclaim and awards for its skillfully executed versions of Vietnamese classics that don’t shy away from tradition—the dishes are all listed in Vietnamese, including diacriticals.

So it may be an opportune time for Nguyen and Ly to expand their menu beyond phở and bánh mì, and to offer a broader range of specialties for Vietnamese people to savor and non-Vietnamese to try—many imbued with the rich smoke of the grill.