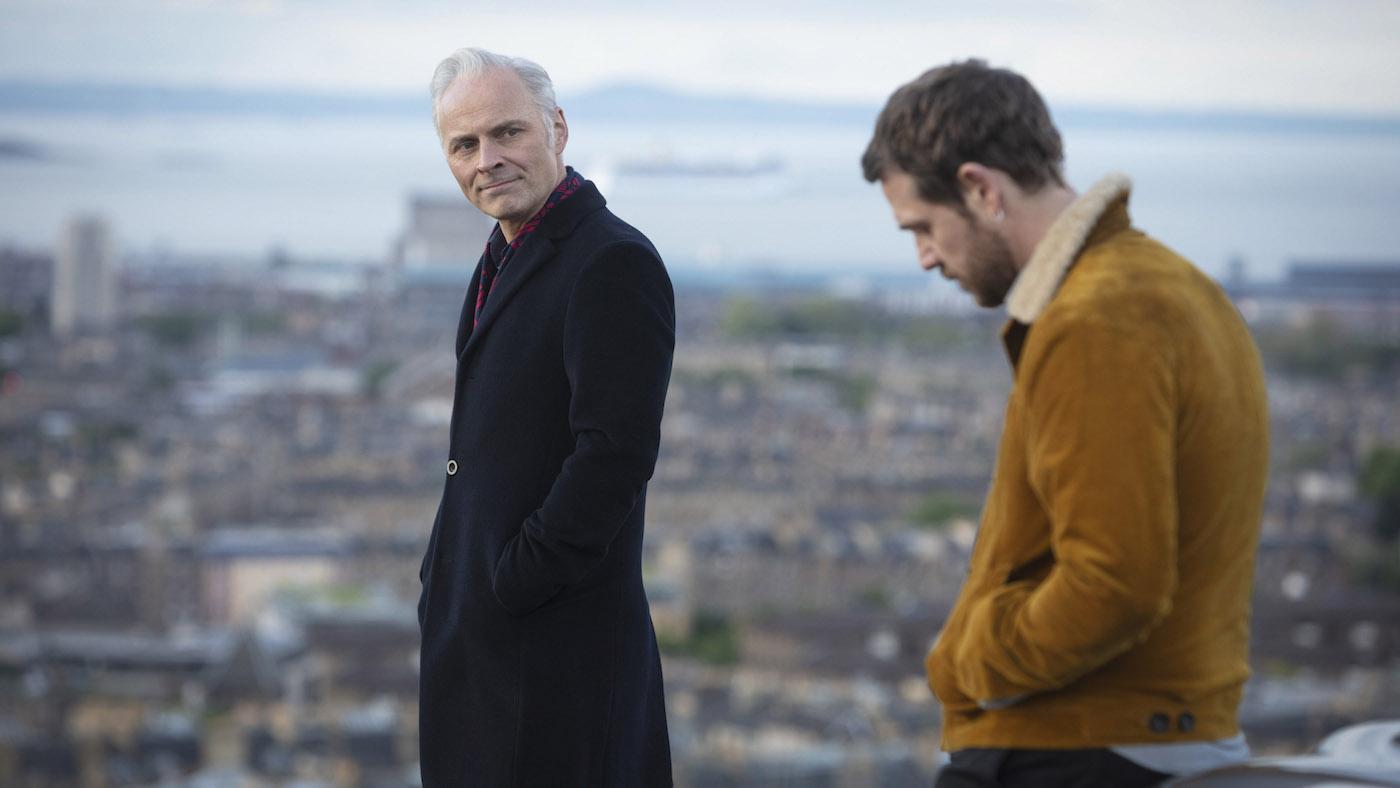 Brothers Max and Jake keep getting pulled further into trouble after trying to cover up a hit-and-run. Photo: Courtesy Expectation/Happy Tramp North

Guilt airs Sundays at 8:00 pm and is available to stream. Recap the following part.

Max McCall drinks champagne straight from the bottle while his brother Jake drives them home from a wedding in Max’s fancy car. Suddenly, Jake hits a man. Max, a high-powered lawyer, wants Jake to drive away, but the man isn’t moving. Jake goes to check on him—he’s dead. Max runs through all the ways they could be held criminally responsible, but Jake is distraught: he takes the man’s wallet and learns his name, Walter, and address—his house is right there.

No one is around, so the brothers drag Walter onto his lawn. Max notices that no one is home and the door is open, so they settle Walter in a chair in his house. A letter on the counter indicates that Walter has terminal cancer. They gave Walter a quick, dignified end, Max says; he was dying anyway. The brothers take his winter clothes off, settle his hand on the TV remote, and drive away. A light in the house across the street flicks off.

The next morning, Max’s wife Claire chastises him for arguing with the bride about the cash bar—such rudeness is why Claire left without him. Max gets a call from Jake, who couldn’t sleep, and tells Claire he’s going to help him—to her surprise, given their rocky relationship. But first Max takes his car to the dealer to fix the dent.

Jake obsessively checks the obituaries until one finally appears for Walter: he died “peacefully.” Max is relieved—until Jake gets a call from Walter’s attorney: his wallet was found at Walter’s house. He can pick it up at the wake.

As the only non-elderly person at the wake, Jake is quickly pulled into helping Walter’s American niece, Angie, with passing out food. Max convinces Jake to befriend Angie in order to prevent her from becoming suspicious about Walter’s death. Walter had no other family, so she’s the only one who could ask for an autopsy, which the authorities didn’t undertake because of his terminal cancer.

Jake claims to know Walter because Jake owns a record store and Walter has an impressive record collection, which he has bequeathed to Angie. Jake tells her that Max played trumpet with Walter. After the wake has emptied out, Jake and Angie have a drink and bond over music, before she kisses him and they end up in bed together.

The next morning, she asks to see him again. He says no, but quickly feels bad and tells her to come to his store later.

She does after collecting Walter’s clothes from the attorney. She’s surprised there was no autopsy, especially since there were bruises on Walter’s legs—the attorney dismisses them as due to being old and frail. Trying to change the subject, Jake eventually involves Max in order to fend off Angie’s inquiries: as a lawyer, he can answer her questions.

At Walter’s house, Max tells Angie he has spoken to the police officers who found Walter and that there was nothing unusual. Suddenly, Claire appears. She tracked Max’s car with an app, suspicious of his sudden friendship with Jake. Max explains about Walter’s death, and Claire apologizes. To defuse the tension, Angie invites them all out to dinner—she’s flying home tomorrow.

At dinner, Claire tells Jake to ask Angie to stay—she’s happy he has found someone nice to date. Max pulls Jake to the bar and reminds him of the prison sentences they could both serve. As they drop Angie off at Walter’s, the conversation veers towards music, and Claire mentions that Max is tone-deaf. He definitely doesn’t play the trumpet. Jake and Max are distracted by their notice of a security camera on Walter’s neighbor’s house.

The next day, Max smashes one of Walter’s garden gnomes, then brings it to the neighbor, asking to see his security footage to catch who did it. But the camera is fake, the neighbor says. Max leaves the gnome with him—he and Jake have dealt with enough, given Walter’s death.

Max and Jake then stop by Walter’s, where Angie shows them the clothes Walter was wearing when he died. There are blood flecks on the legs, and Walter was wearing his dirty shoes inside. Max offers to hire a private investigator to look into it. Angie has pushed her flight home back anyway. “I feel like I’m not done here,” she says.

Max’s PI, Kenny, is a man he just fired for drunkenness—and indeed, he’s drunk when he shows up at Walter’s. He only took the job because Max and Jake convinced him it was his chance at redeeming himself with his family.

Meanwhile, Claire continues to befriend Angie, inviting her to a spin class. They both meet a woman, Tina, there, who later takes an interest in Claire, telling her that she’s a lesbian and then asking Claire for her number.

Angie finally asks Jake to “cut the shit”: Max doesn’t play trumpet, and didn’t know Walter, did he? What’s he up to? Jake confirms Angie’s suspicions: he misrepresented Max’s relationship because Max had done legal work for Walter that was protected under confidentiality, he lies.

Kenny reappears at Walter’s house, sobered up. He has decided to go clean, thanks to Jake’s suggestion that he use this case as his redemption, and wants another look with a clear head. He notices paint fragments on Walter’s pants, and sends them to get tested, despite Max’s offers to do it himself.

Max tries another tactic. Bringing Kenny to a bar, he tries to “accidentally” serve Kenny vodka after telling him that he witnessed Kenny’s wife kissing another man. Kenny cries; Max offers to handle testing the paint sample. But the lab already has it. Kenny thanks Max for challenging him with a drink, and assures him that he is now on the straight and narrow. 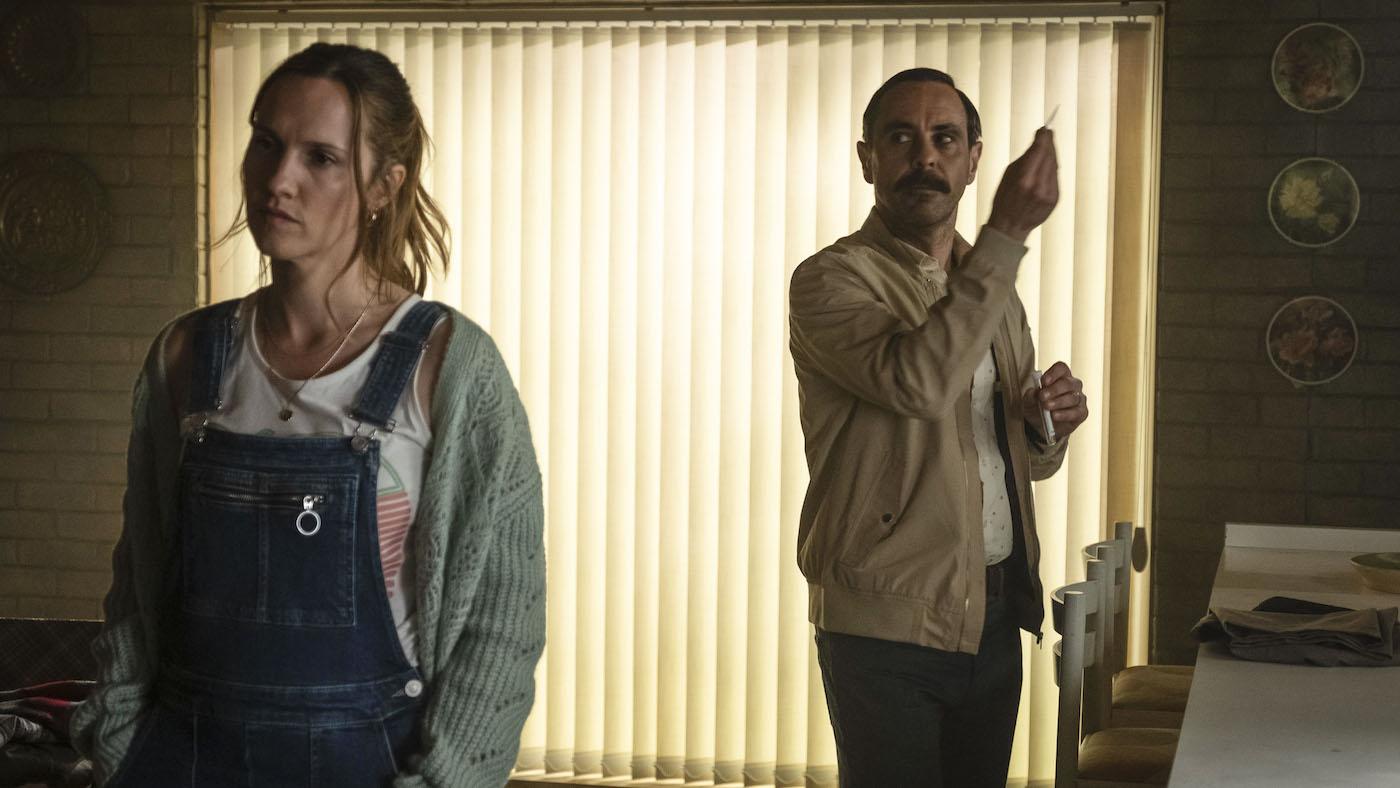 Angie begins to have suspicions about Max that he tries to allay with an investigator, Kenny, who then goes rogue. Photo: Courtesy Expectation/Happy Tramp North

Kenny’s not the only one making Max nervous. Having noticed another, older neighbor watching him and Jake as they have visited Walter’s house over the past few days, he goes up to her while she’s raking. “I saw,” she tells him.

He meets with her and tells her that she simply saw two good Samaritans helping Walter home. She asks for twenty grand. You killed him with your car, she says. Max tries to negotiate down; she refuses.

Leaving her house, he notices Kenny’s car at Walter’s house and tries to get Kenny to report any findings to him first—but Angie insists on direct communication with the investigator.

Angie tells Jake she’s going to stay in Edinburgh for a while—is he glad? Yes, he says. She wants to give Walter’s records to Jake for the store, but he demurs. As she goes through Walter’s belongings, he’s surprised to find a photo labeled “my darling niece” of a young girl who looks nothing like Angie.

When he asks about it later, she explains that she lost a lot of weight and substantially changed her look over the years. When Jake casually mentions it to Max, Max brings him to Walter’s attorney to confirm Angie’s identity, on the pretense that Jake wanted everything on the up-and-up before buying Walter’s records. The attorney shows them a copy of Angie’s passport and says he found her through a family friend of Walter.

Max lies to Claire that he is going to lend Jake some money to deal with his debts. When she asks how much—twenty grand—she’s appalled. You already bought him his store, you can’t support him anymore, she says.

Max goes back to the neighbor and refuses to pay. She has no evidence.

He returns to Claire and promises a date the next evening; he’s been neglecting her. She has another prospect: her gym friend Tina tells her she likes women like Claire, and texts Claire her address.

Kenny comes to Angie with bad news: the lab somehow lost the paint samples. Walter’s pants have been washed, so Kenny can’t take a new sample. Max—who bribed a worker to destroy the sample—fires Kenny. He can’t sustain any more reputational damage, he says. Angie pulls Kenny aside and asks him what he thinks happened to Walter. Keep looking, he tells her.

As Kenny is leaving Walter’s, he notices the neighbor with a camera putting out Walter’s old garden gnome. Recognizing it from a photo of Walter, he walks over and asks about the camera—and realizes that it’s real, despite what the man told Max and Jake. The man mentions telling the “others,” including a man with white hair—Max—about the camera, while Kenny combs through the footage. Eventually he finds blurry footage of two unidentifiable men carrying Walter’s body into his house and then leaving. No one else has seen this, the neighbor tells Kenny.

Except Max has. The footage arrived on a CD at his office with a note from the neighbor who’s blackmailing him.

Max goes to a Fast Cash 4 U store, asks if “he” is in, and then enters a hidden room in the back. A man he knows hands him the twenty grand in cash and tells him he’ll work it into Max’s payments. “I haven’t seen you look like this before,” he tells Max. Like what? Max asks. “Like the others.”

After Max hands the blackmailing neighbor the money, she tells him not to worry about the other neighbor from whom the footage came, or Walter’s niece. You look tired, she tells him. It’s over now; you can leave all that behind with me. After Max leaves, she calls Angie, who looks across the street at her and doesn’t pick up.

Kenny visits Max to receive his payment for his work, and asks if Max spoke to any of Walter’s neighbors. Max pays him and sends Kenny away. He cuts up the CD of the security footage, then accepts a folder of papers signed by Jake, delivered by a man Jake calls his accountant. Max slips them into a packet of Customs and Revenue Service papers, and hands them back to the man.

Kenny, waiting in the lobby, follows the man when he leaves. His destination? Fast Cash 4 U.

Stood up by Max, Claire nervously visits Tina. They sleep together, and Claire still returns home before Max. Confused and lost, she mostly ignores Max’s earnest apology: the last week has been hard, he says, but everything is back to normal now. Everything will be different.

Jake calls Angie from his flat above a pizzeria and tells her he has been lost in his life for some time now—until he met her. I want you to stay, he says. She responds with a monosyllable: yes. She hangs up.

Jake lights his stove with matches from Angie, and notices the name of an English pub on the matchbook. He googles it and searches through photos, eventually finding one of Angie bartending. So much for being from Chicago.

Angie has her own suspicions. Going through Walter’s financial statements, she discovers that all of his checks have gone to a Sheila Gemmell. She marches across the street to the blackmailing neighbor’s house. Why are you still here? the neighbor asks. I think you’re lying about what you did, Angie responds. “What we did,” the neighbor says with a smile. She closes the door. Angie turns back to Walter’s house, a tear rolling down her cheek.