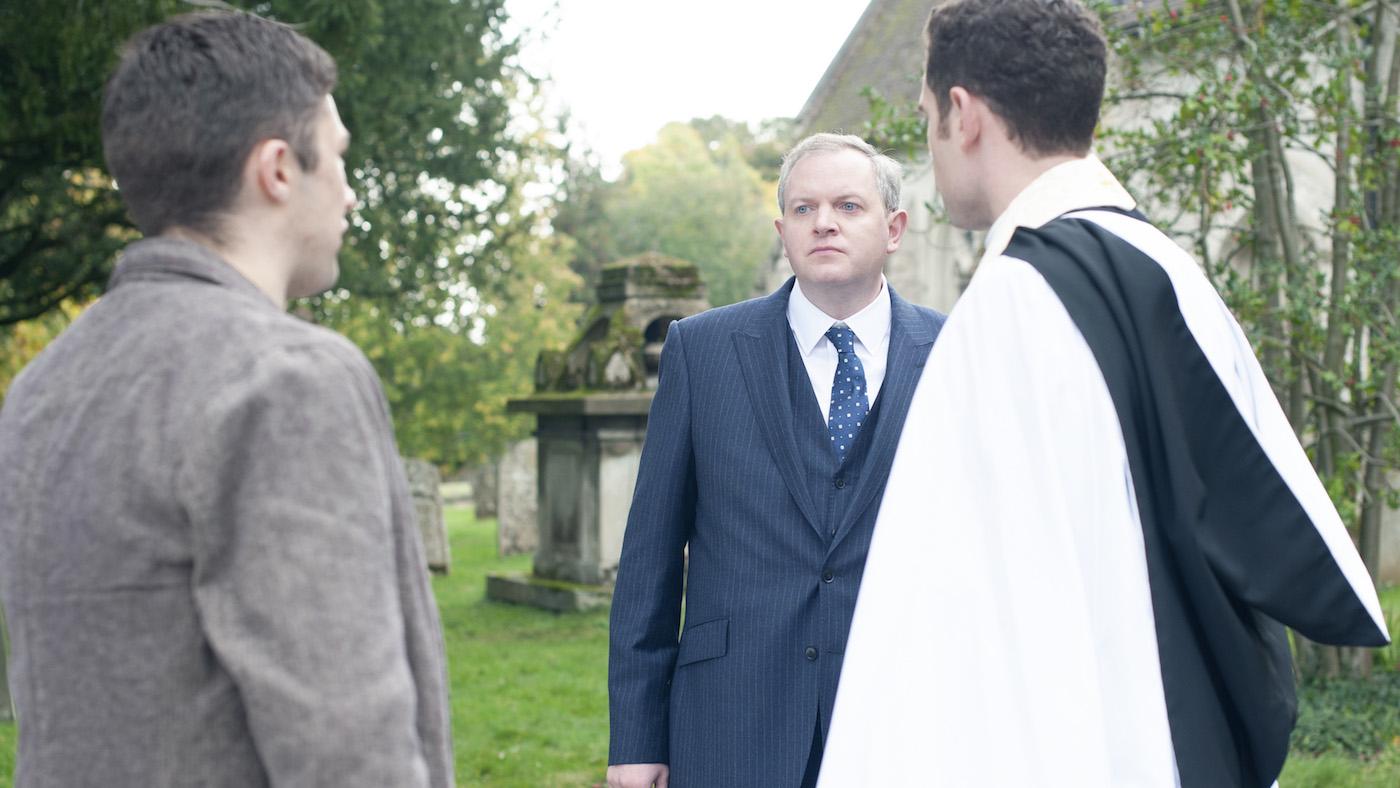 Will ends up in the middle of a dispute over a child. Photo: Masterpiece and Kudos

Will is about to baptize a child James when a young man runs in, shouting, that’s not his name! His name is Billy, he’s my son! This is obviously upsetting to the parents of the child, especially the father, Marcus Asper. (The mother, Penny, is rather more hesitant about everything.) Marcus demands that the police be called; when Geordie arrives, Marcus explains that the young man, Davy Connor, has been harassing the Aspers for days now. Geordie takes Davy away, after he says something about a “Joan Beaumont” stealing his child.

Geordie reluctantly goes with Will to meet Joan, who runs an adoption agency. Hearing her speak to a pregnant woman, Nicola Hart, Will takes an instant dislike, feeling that Joan coerces young women to give up their infants against their wishes.

Joan cannot discuss individual cases, and explains that fathers like Davy, who are not married to the mother of their child, do not have a say in the decision to put a child up for adoption—it’s up to the mother. Geordie doesn’t see any crime, so he decides against any more investigation.

Until Nicola finds Joan dead in her office that evening, her head bashed against the stairs.

Will and Geordie go to question Davy, but he doesn’t live at the address he listed: it’s his girlfriend’s place. Molly Lowden explains that she didn’t want another kid when she got pregnant with Davy’s child, so she gave him up to Joan.

At Joan’s office, Will and Geordie notice that amongst her many adoption files—one birth certificate doesn’t even have a birth name on it—the A’s are missing. And there’s a vase of flowers that wasn’t there before.

Will and Geordie are off to the Aspers. Marcus doesn’t want people to know their new son James was adopted. So when Geordie sees Joan’s A files in Marcus’s briefcase, he brings him in.

At the station, a woman is waiting for Will. It’s his acerbic stepsister, Tamara, with money for Will from his wealthy stepfather St. John. Tamara wants to get to know Will better, despite a hostile first encounter: Will had asked St. John for money—for the church, he said—and Tamara derailed St. John from giving it to him. 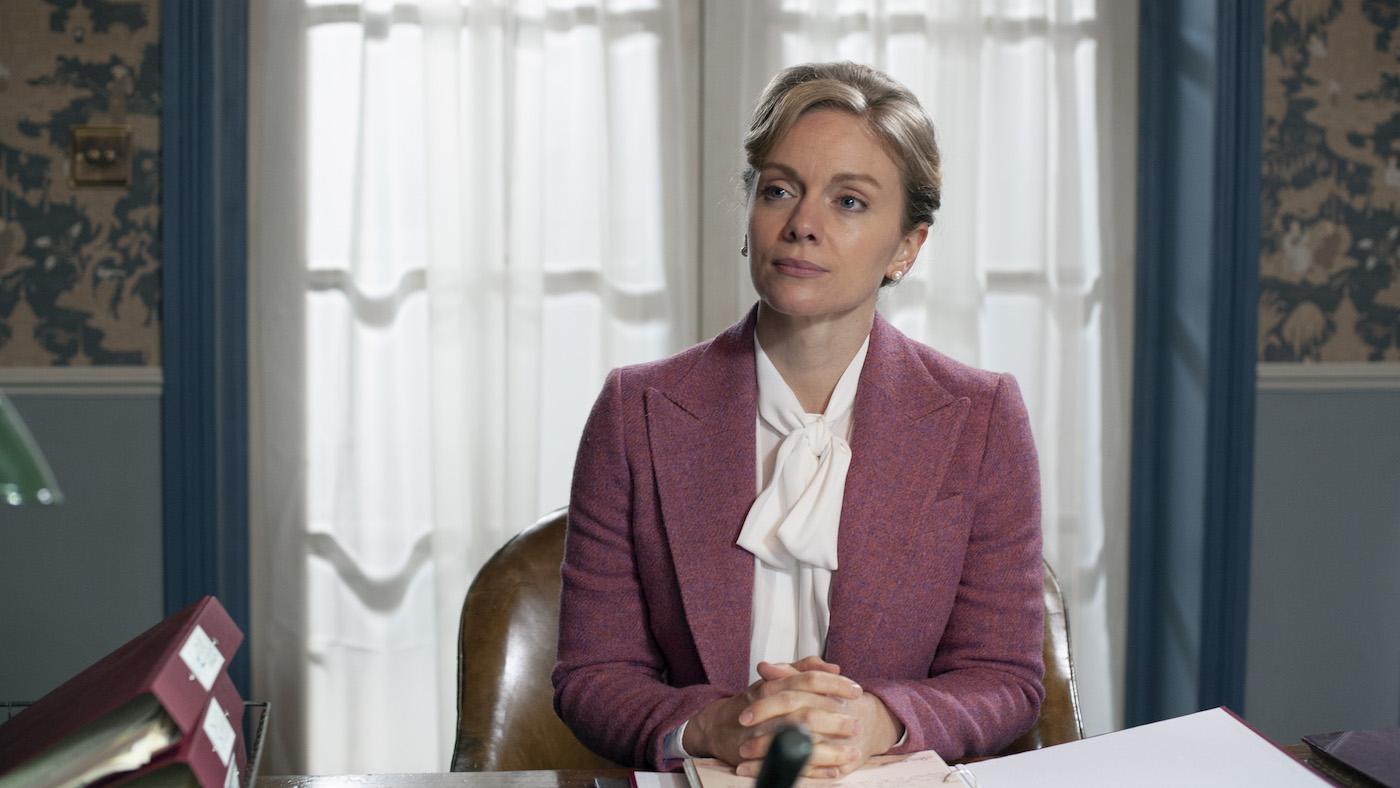 Will takes an instant dislike to Joan Beaumont based on her interactions with young pregnant women. Photo: Masterpiece and Kudos

Why did Will need money? It’s not for the church but to aid Leonard, who has received blackmail from Bryan, the holiday resort worker who tried to kiss him. The letter demands 50 pounds, or else evidence that Leonard is gay will be released.

Leonard doesn’t want to involve Geordie, so Will offers to get him the money. Will is late in arriving to Leonard’s meeting with Bryan, who resists Leonard’s pleas and offer of help. All Bryan will accept, other than money, is for Leonard to say that he lied and led Bryan on. He also insists that Leonard’s proclivities are disgusting, and that he was simply testing Leonard. When Will finally arrives with the money, Bryan becomes even more upset. You have everything, he tells Leonard: a lover, close friends.

Leonard later tells Will that he used to feel like Bryan: bitter, hating himself. This is not Will’s fight.

Marcus explains that he was out walking with his son when he found himself outside Joan’s office. The door was open and she wasn’t there, so he went in and took the A files—he doesn’t want people to know about James’s adoption. Penny even went away for her “pregnancy” to reinforce the subterfuge.

Penny never saw herself as a mother, but Marcus and Joan persuaded her into the adoption. Davy, on the other hand, still wants his son back.

When James goes missing, the stress of the situation leads Penny to admit to Marcus that she only agreed to the adoption on his behalf; he made her feel like she wasn’t enough for him on her own. Geordie, a seasoned father, takes Marcus aside for a conversation.

Will, meanwhile, is speaking to Davy in the chapel, where he has been found holding baby James. I’d do anything for my son, Davy tells Will. And I didn’t kill Joan. Will says he wishes he had a father like Davy, and convinces him to return the baby.

At the station, however, it has become evident that Molly would have kept the baby if she could afford it. As Davy tries to hand over James to the Aspers, Marcus concedes that Davy and Molly could do a great job raising the child, with some aid from charities—which he and Penny will be supporting. Will later baptizes the child Billy James Connor.

But what about Joan’s death? Will has a realization: the flowers on her desk were pink carnations, a symbol of a mother’s undying love. He also makes a connection that the unnamed birth certificate had the same birthdate, 19 years earlier, as that given by Nicola Hart on her intake form for Joan. Will and Geordie go to Nicola’s address and find her not pregnant: she was faking it.

Joan is her mother, who gave her up for adoption—it’s the reason Joan got into the adoption business in the first place. Nicola loves her life now, but after her parents told her who her mother was, she wanted to meet her. She could only get a meeting with Joan by pretending to be pregnant. When she went to speak with her and reveal their relationship, Joan didn’t believe her and fell on the stairs while backing away. Nicola left the flowers for her as a sort of penance.

Leonard tries to pay back Will, but Will refuses: it’s St. John’s money anyway. They might need more help soon, though: Bryan goes to the police with something to report, and the archdeacon is there, too.