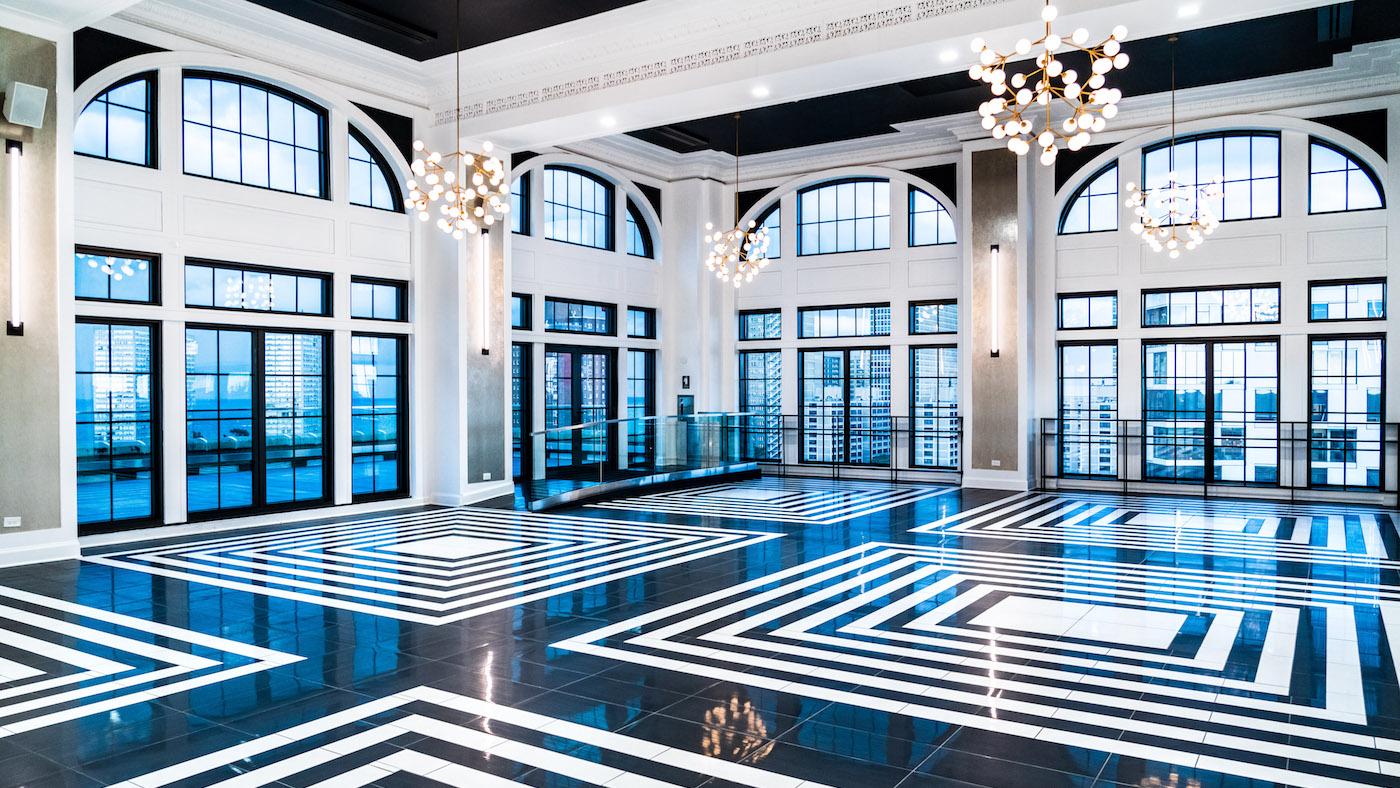 After an unusual year where all its events were virtual or outdoors, the Chicago Architecture Center's Open House Chicago is back in typical form, allowing you to peek inside more than 100 sites across Chicagoland on October 16 and 17. Online programs remain, and will take place throughout October. There are also themed trails available through the Open House Chicago app that spotlight such topics as the 150th anniversary of the Great Chicago Fire, the late architect Helmut Jahn, the Obamas in Hyde Park, and more.

We know that's all a lot to take in, so we've chosen some highlights for you from all of the sites. Plus, check out Geoffrey Baer's recommendations for this year. You've got a whole weekend to fill!

Be sure to check out individual sites on the Open House Chicago website or app for information about when they are open and more. 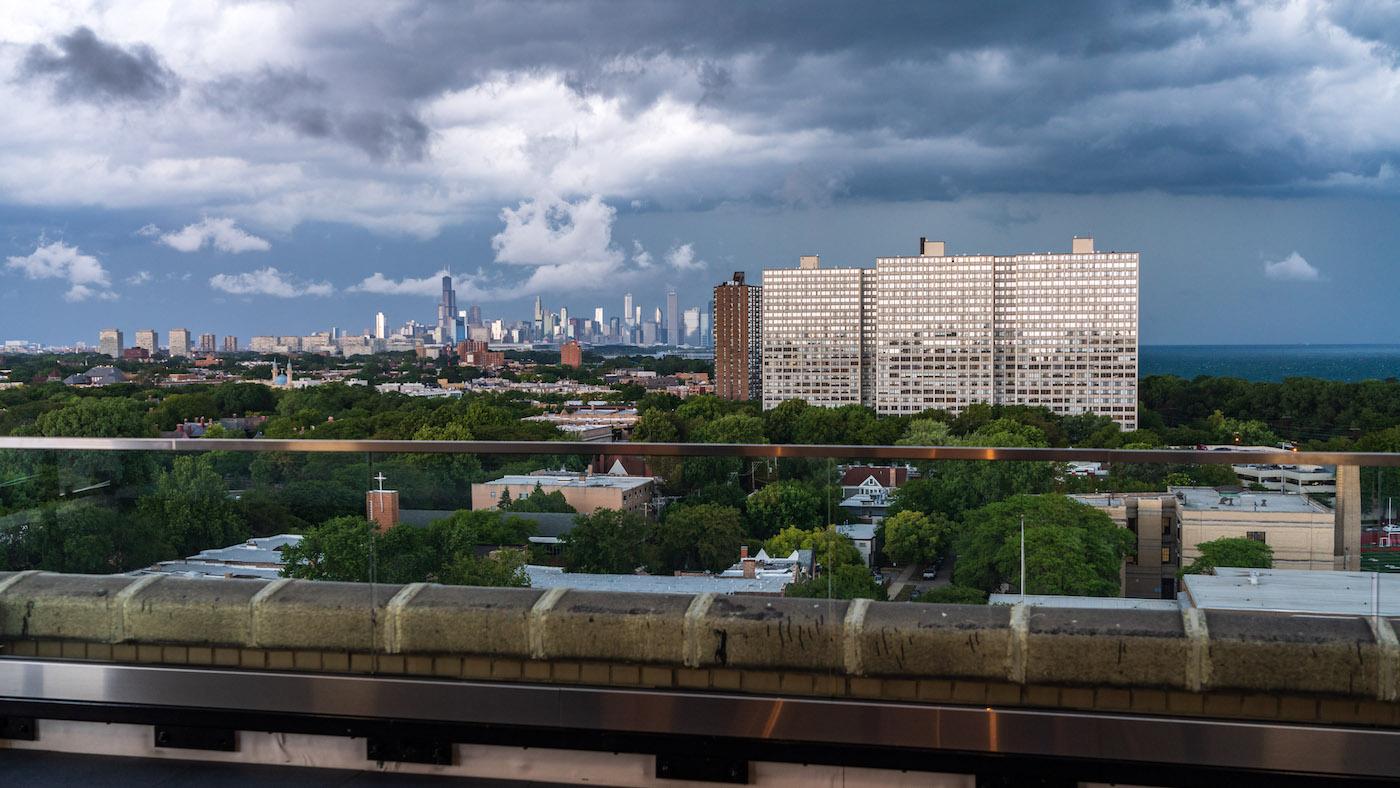 The view from the Penthouse at Hyde Park. Photo: Anna Munzesheimer

This rooftop ballroom and open-air terrace on top of the fourteen-story, Art Deco former Piccadilly Hotel and Theatre is a new addition to Open House Chicago this year. While the space itself is attractive and a pleasing fusion of modern and 1920s lines, perhaps the most stunning part is the view of the skyline and the lakefront. 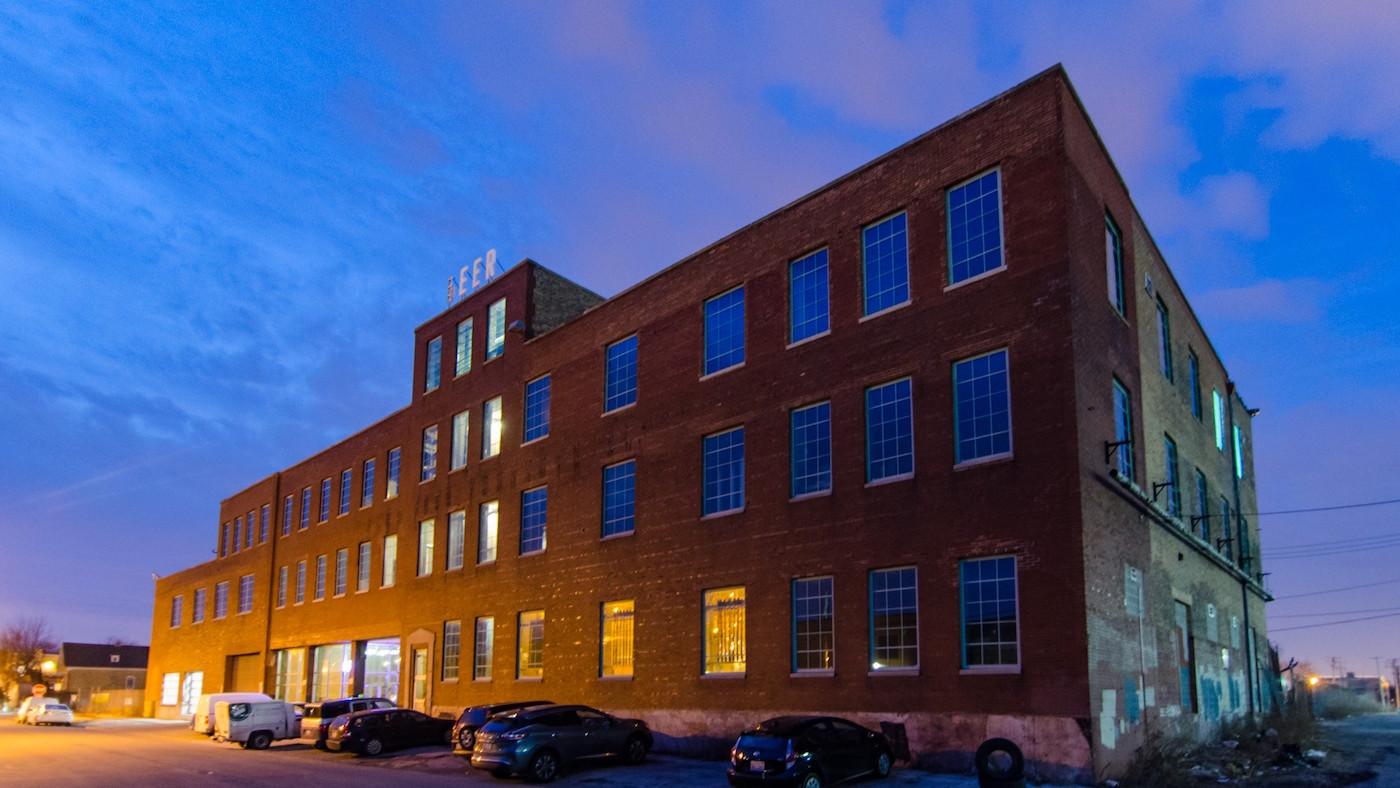 This former meatpacking facility in Back fo the Yards is now home to twenty different food businesses, from beer and kombucha breweries to farms and a bakery. The Plant seeks to be sustainable and features some innovative processes and businesses. During Open House, visitors can purchase food and drink and view production spaces not typically open to the public.

Bubbly Dynamics, the firm that renovated The Plant, is also behind Bubbly, a light-industrial site in Bridgeport along similar lines that is open during Open House. 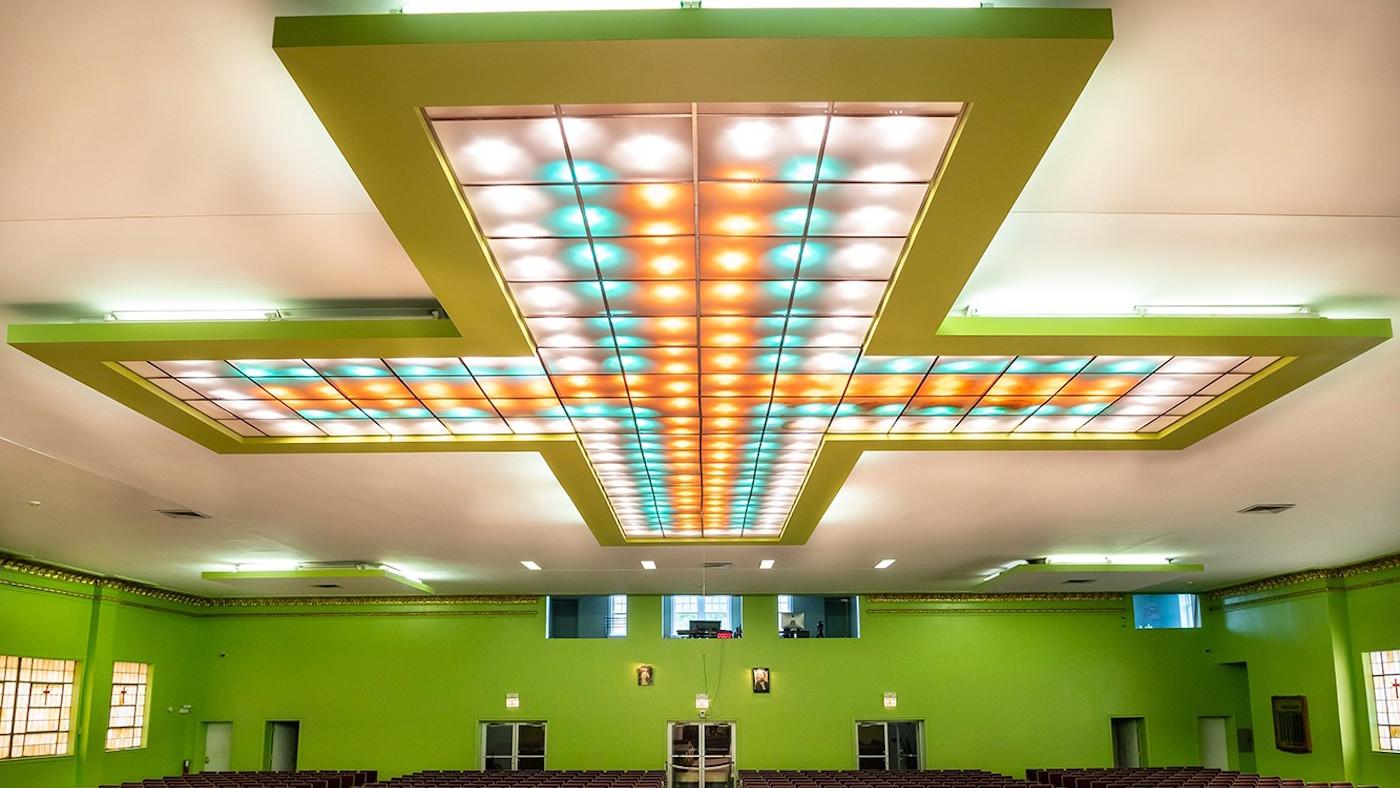 The interior of the First Church of Deliverance. Photo: Anna Munzesheimer

This Bronzeville church is a former hat factory converted into a place of worship by Walter Thomas Bailey, Illinois's first licensed Black architect, and the Black structural engineer Charles Sumner Duke. With its colored lights and Art Deco and Art Moderne touches, it's certainly one of the more unusual and striking churches in the city.

Learn more about other architecturally significant Black churches in Chicago from photographer and writer Lee Bey, who explored some of them for WTTW.

3535 W. Roosevelt Rd. Access to the theater will be on the side entrance of the building. There is a parking lot on that side of the bulding. Closed Sunday. 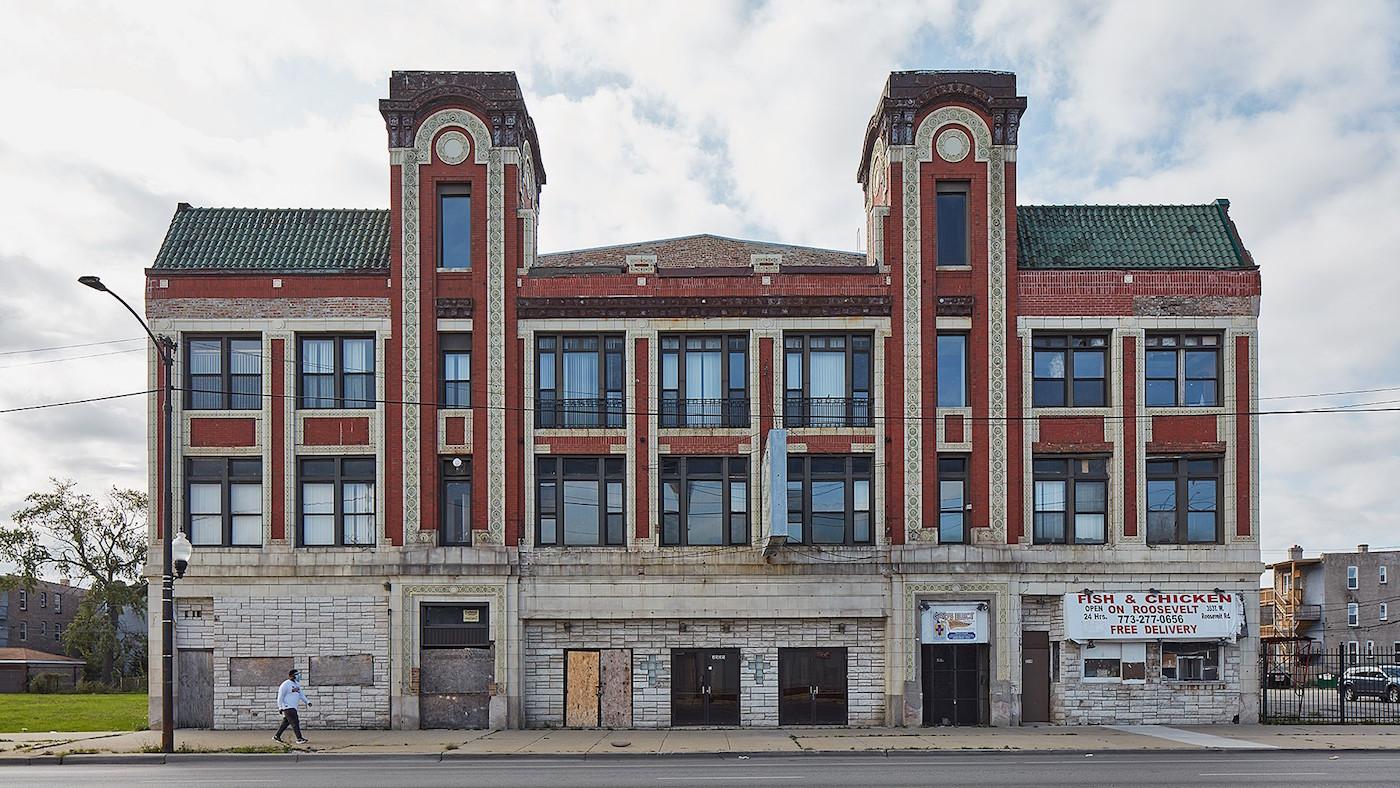 You're probably familiar with the Chicago, Riviera, and Uptown theaters—the Central Park Theater in North Lawndale was the first of those movie palaces built by Balaban & Katz and designed by Rapp & Rapp (which is also behind the Piccadilly Theatre that was once a part of the building that now houses The Penthouse Hyde Park). Built in 1917, the Central Park Theater was one of the first theaters in the country to have air conditioning. It later became home to a church, and is now being restored into a community and event center. 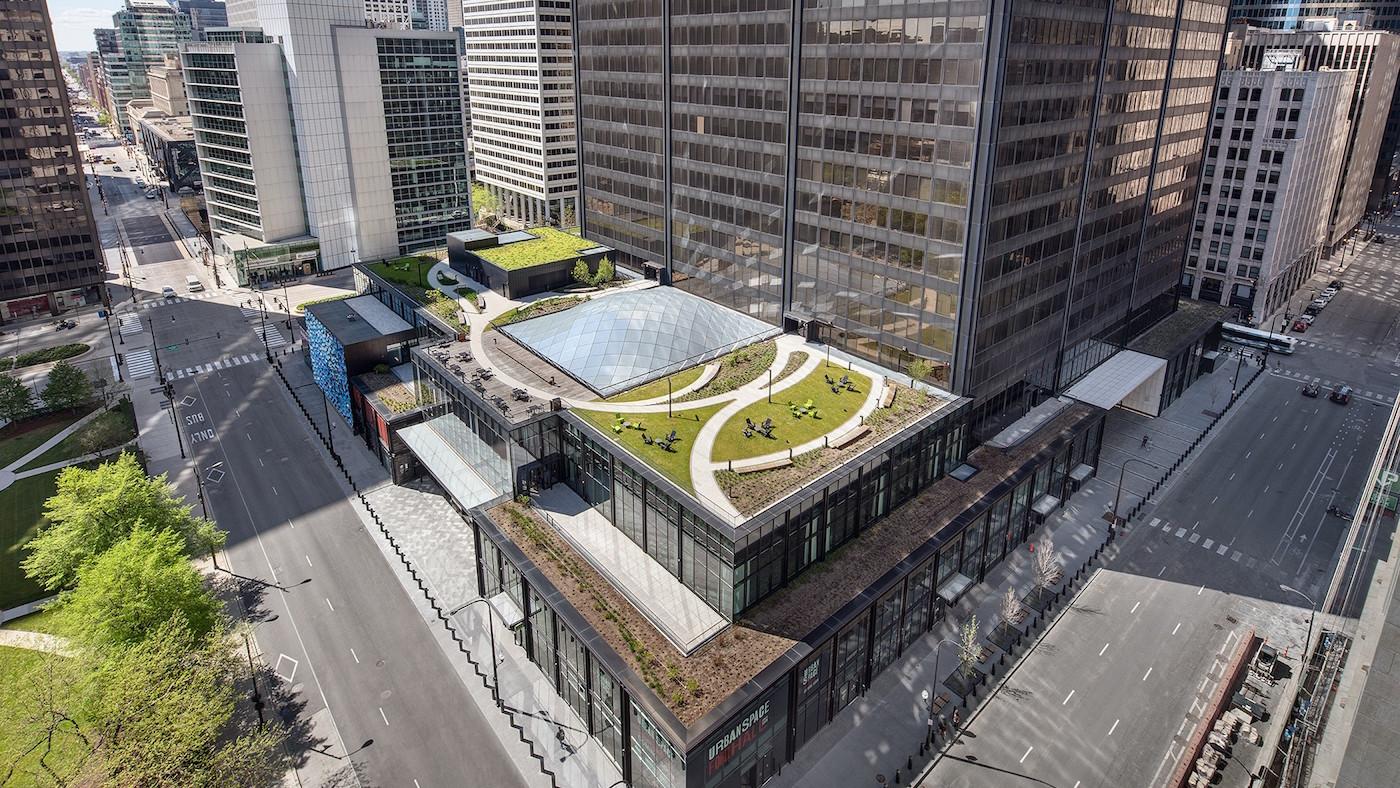 It probably seems odd to recommend perhaps Chicago's most iconic building, a common tourist attraction that you can pay to visit any time. But the lower levels of the tallest building in the city have gotten a makeover in the past few years, designed by architecture firm Gensler. A new extension features an outdoor terrace, public art by Jacob Hashimoto and Olafur Eliasson, dining and retail, and a redesigned lobby. It's a good opportunity to approach an old favorite with fresh eyes. 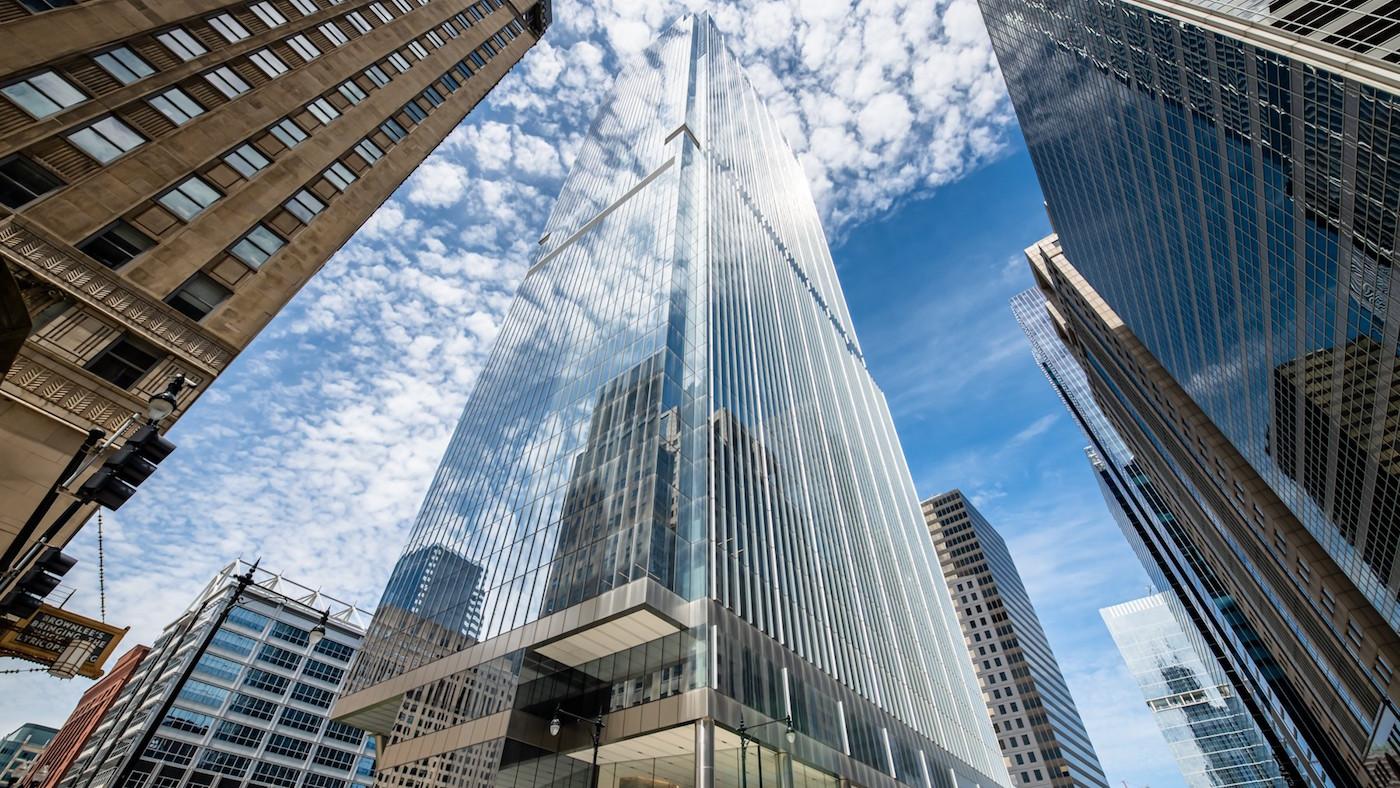 Yes, we know Geoffrey Baer chose this as a highlight too, but it's a striking, brand-new building in a prime location on the river, and you can catch a sky-high view from the 55th floor during Open House, so we couldn't pass it up. The tallest commercial office building completed in Chicago in the last three decades, the Goettsch Partners-designed tower is notable for its riverside frontage, which is cut out of the base of the building to allow riverfront access to the public. 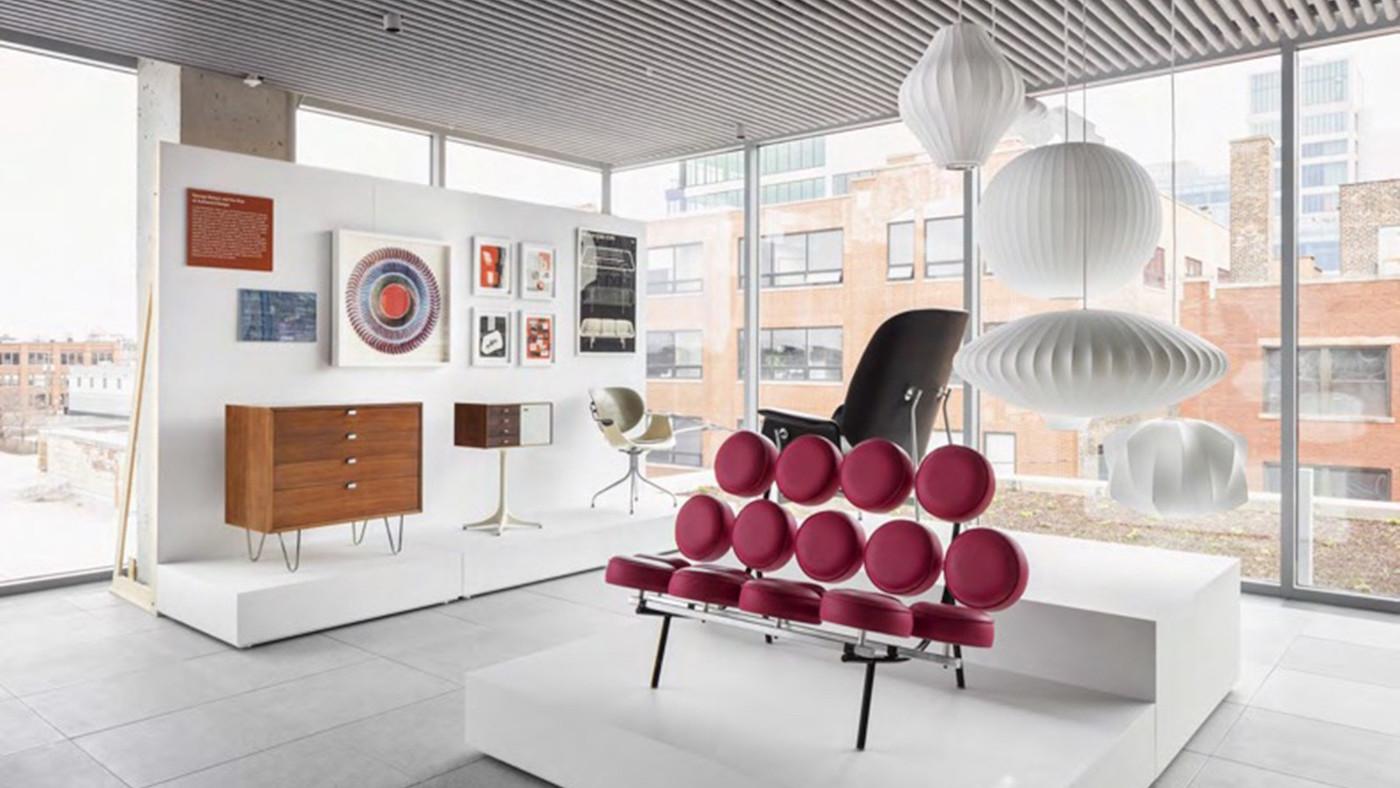 This is another new site, completed only in spring of this year. The brick facade of this 1922 former poultry wholesale business has been preserved and restored, updated with new interiors and a newly constructed, adjoining five-story building. Open House visitors can see the first and third floors, as well as an exhibition of artifacts and furniture from the Herman Miller archives in a glassy rooftop pavilion. 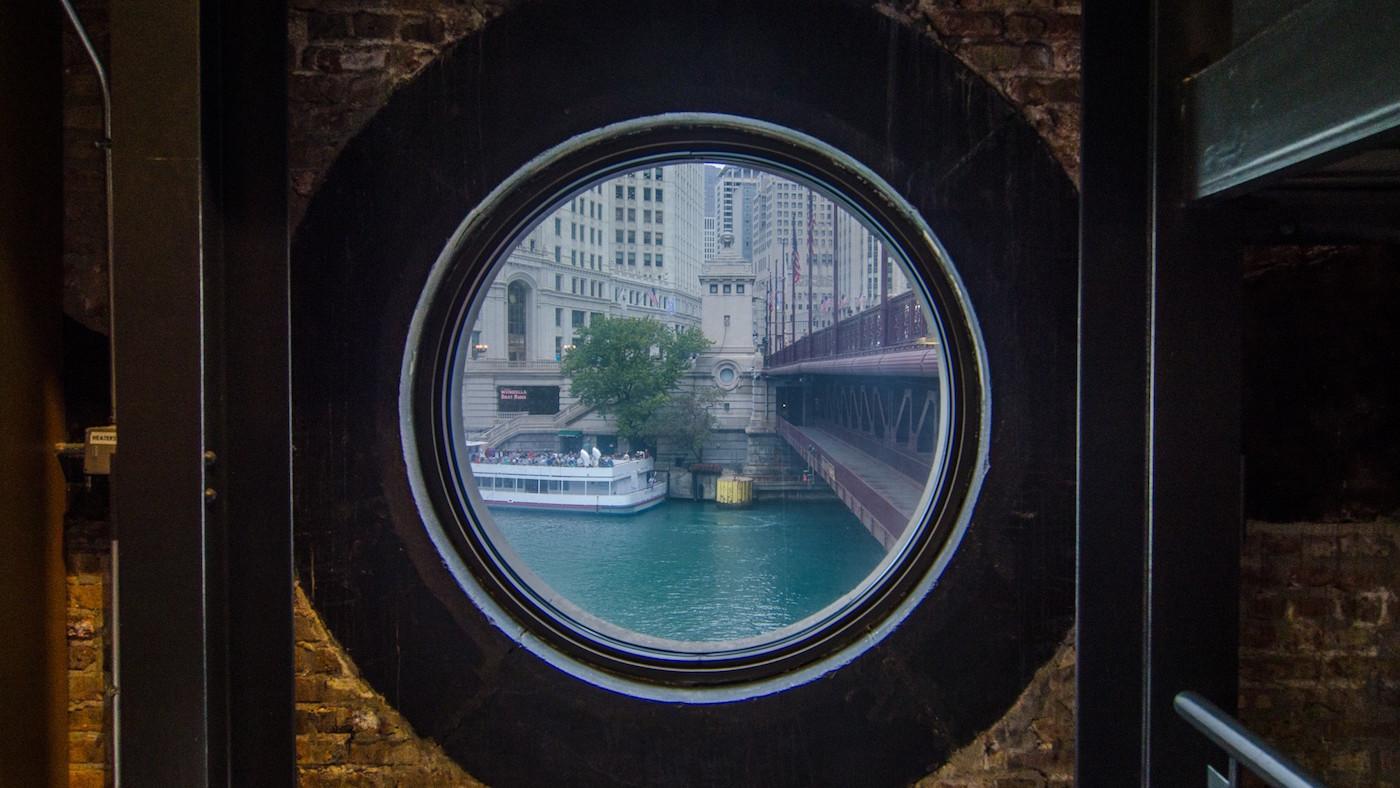 The view out a window from the McCormick Bridgehouse. Photo: Eric Allix Rogers

You've probably passed this stately bridgehouse at the corner of the DuSable bridge at Michigan Avenue plenty of times, but Open House is your chance to both pay more attention to its structure and bas-relief as well as go inside to see some of the inner workings of the movable bridge as well as a museum celebrating the Chicago River and its bridges. 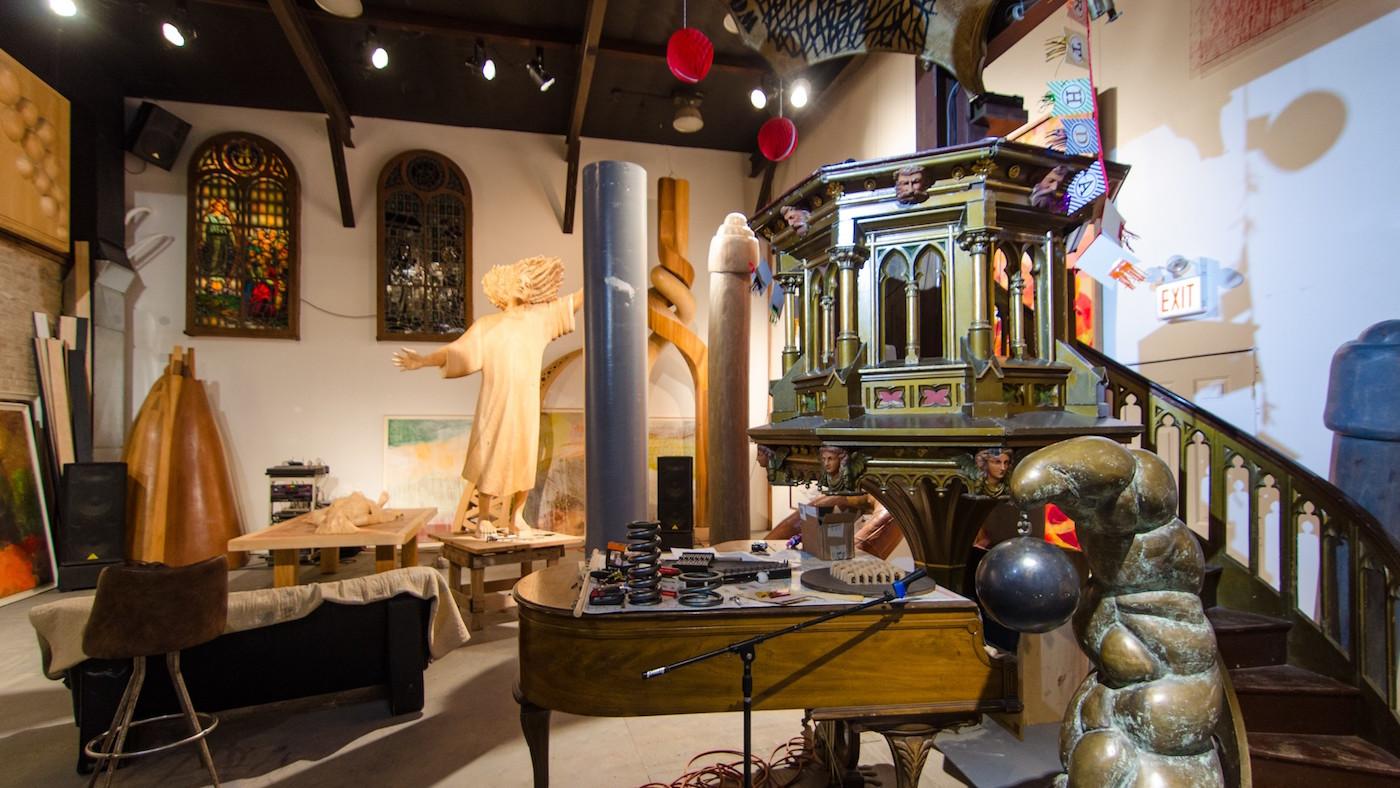 You'll find an eclectic assortment of monumental objects and works in this showroom and studio, home to the artist Jerzy S. Kenar. Kenar's work is visible at O'Hare, St. Benedict the African Church, and Renaissance Park, among other places. Open House offers a rare glimpse into the workspace of an artist. 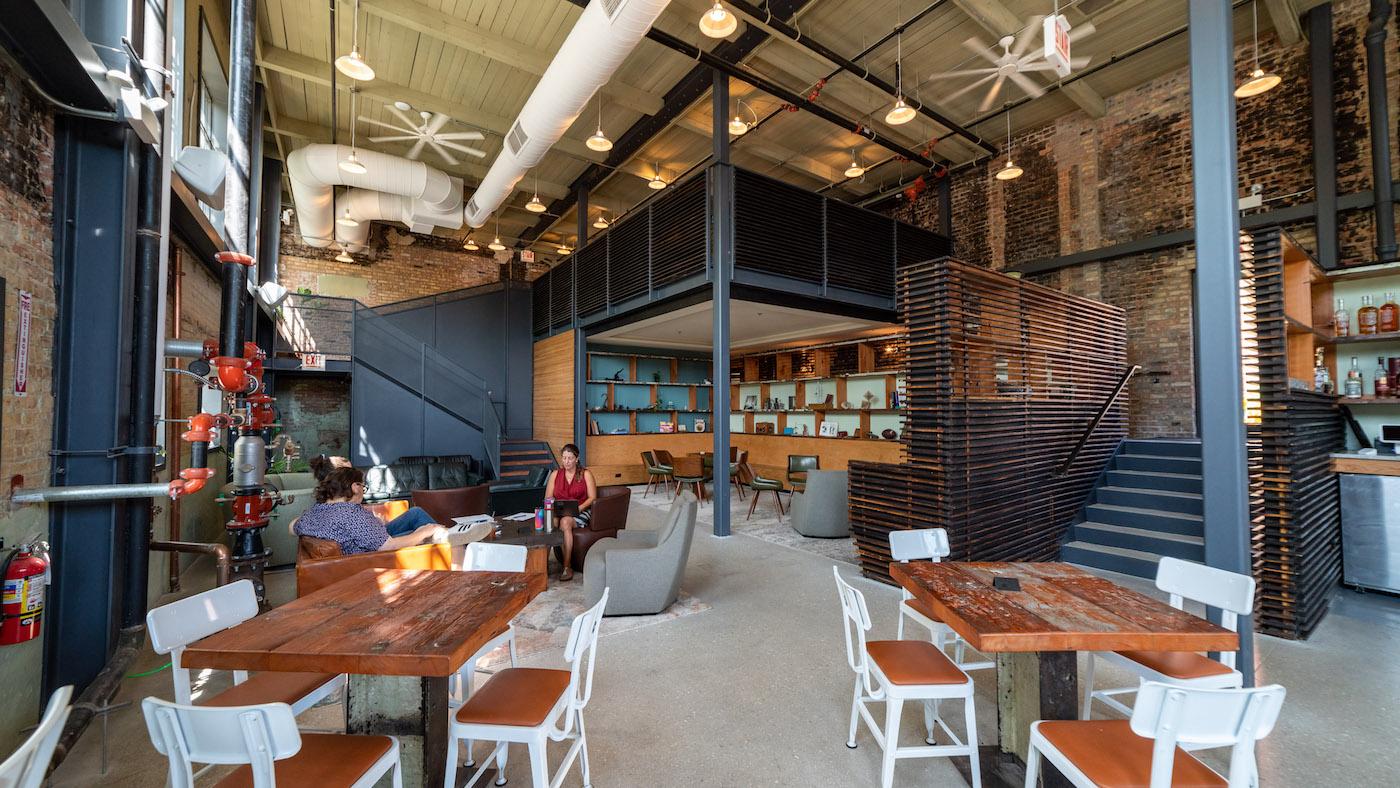 This unique social club off the Chicago River in Avondale opened in 2020. Formerly home to a dental tool manufacturer, the space has been reimagined by DAAM Projects and development company PLATFORM into a hub for artisan and craft classes. 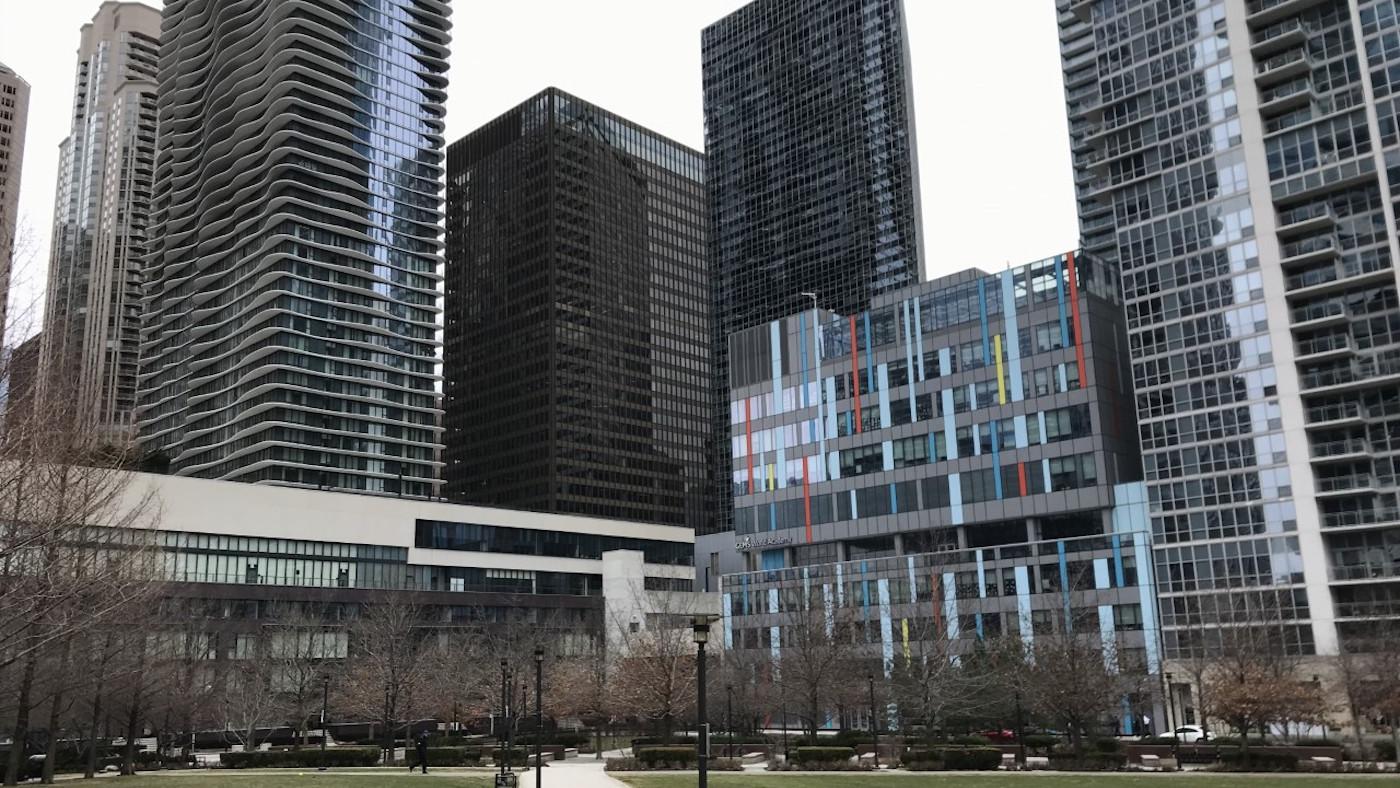