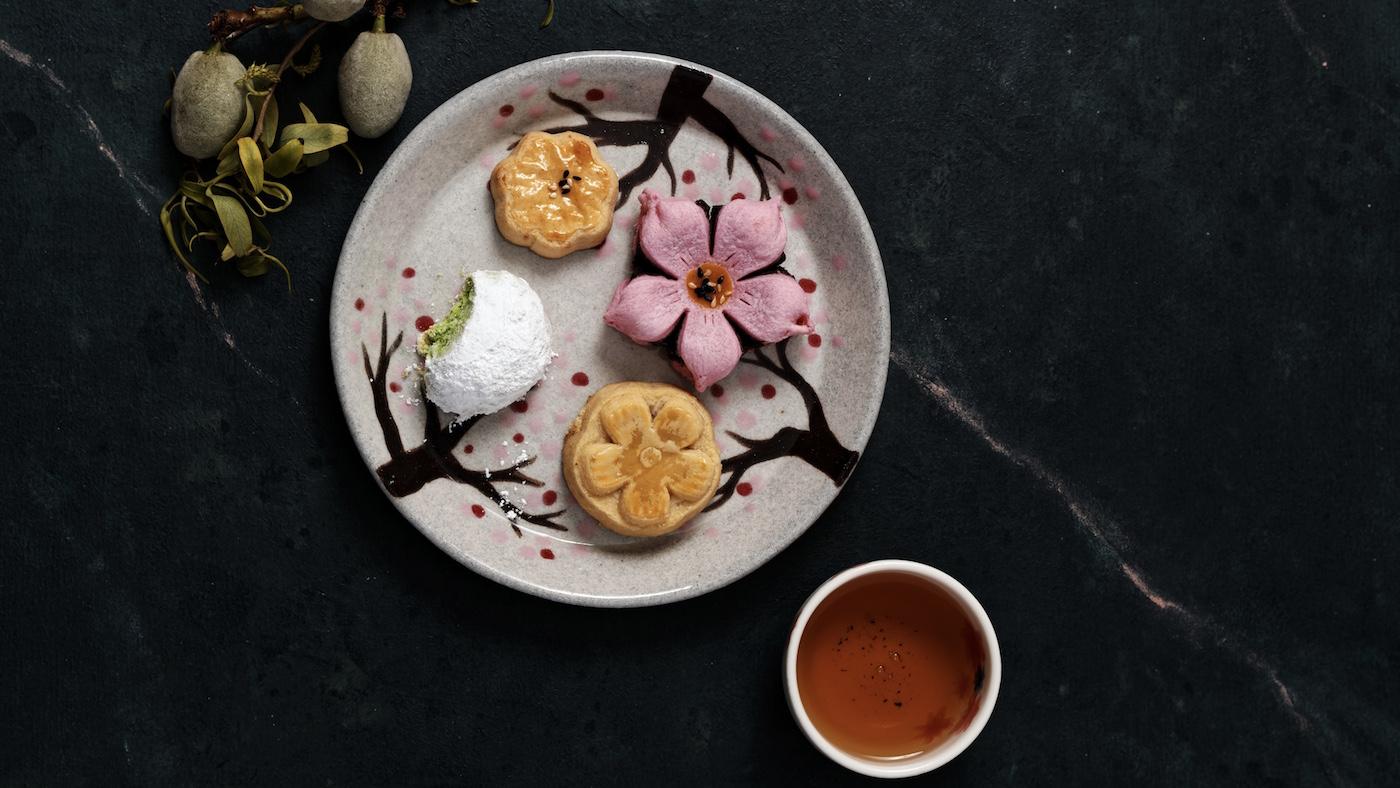 Danielle Chutinthranond of Monsoon Pottery has collaborated with restaurants and bakers such as Jaye Fong of Maa Maa Dei, whose pastries are displayed on Chutinthranond's work here. Photo: Courtesy Jack X. Li

Think about the best bowl of ramen you’ve ever had: the ingredients arrayed in an appealing tableau set off by a glossy glazed rim. Steam and scent billowing out of a wide bowl—but not so wide or shallow that the soup cools off as you delve its depths. The last sip of unctuous broth pleasantly slipping over a sloped edge as you lift the bowl to your mouth.

Obviously the food itself is a main driver of the pleasure—but it is also facilitated by the bowl. “The shape supports all the other aspects of eating, like the visual aspects, the practical aspects,” says Danielle Chutinthranond. “I don’t necessarily want people to be aware of or think about all those things,” but rather just enjoy the optimal, frictionless experience of eating ramen.

Chutinthranond is obsessed with crafting dinnerware that enhances the joy of eating and sharing food. She makes ceramics ideally designed for cuisine under the name Monsoon Pottery in Chicago, selling pieces such as her ramen bowls, serving platters, cups, plates, chawans—bowls for tea—and more, directly to consumers. (People can sign up for a newsletter to learn about new releases and get early access to her limited quantities.) She also occasionally supplies custom pieces to Chicago restaurants such as Parachute, Wherewithall, Giant, and the upcoming Loaf Lounge. And she occasionally does retail collaborations, such as one with baker Jaye Fong of Maa Maa Dei and Annie Xiang of Volition Tea or an upcoming one with Lao Peng You.

“I feel like one of the reasons why I get so into the design of this stuff is because I just like to eat so much,” she explains with a laugh. “I’m just so good at eating!”

She grew up surrounded by food: her family owns and operates a Thai/Pacific Rim restaurant in Syracuse, New York, and she often worked in the kitchen. Some of her ceramics ideas have emerged from her need to find the exemplary dish from which to eat something she has cooked. “I’m always thinking about food,” she says. “I’m totally obsessed with it.

“I’m one of those people who chooses an interest and then it becomes really singular for a long time, and my first one was food. Growing up, there were different levels of it, like: I really want to learn how to master this technique so I can cut this thing and it will look the way I want it to look. And, now I really want to learn to about this cuisine: what are the building blocks of making Italian food? Just moving around and building and building and building. And my relationship to pottery has been really similar.”

Chutinthranond studied physics at the University of Chicago and then worked in the tech industry, first as a software engineer and then in user experience. But she eventually “imploded.” She took a year off, supporting herself with some freelance work, and tried out a pottery class at Lillstreet Art Center in Ravenswood. The connection was instant.

She became obsessed with ceramics and honing her abilities, eventually deciding to start selling her work after her pottery began overwhelming her home. “I have a vivid visual imagination,” she says. “There will be an image I have in my head of something that I want to make, and I just work hard to close the gap between what my hands are able to do and what that image is, just getting closer and closer and closer. But it’s pretty fun now, because I feel like I’ve put in the work, and if I think of a shape, or something I want to try, or something that I want on my table, I can figure it out and make it.” 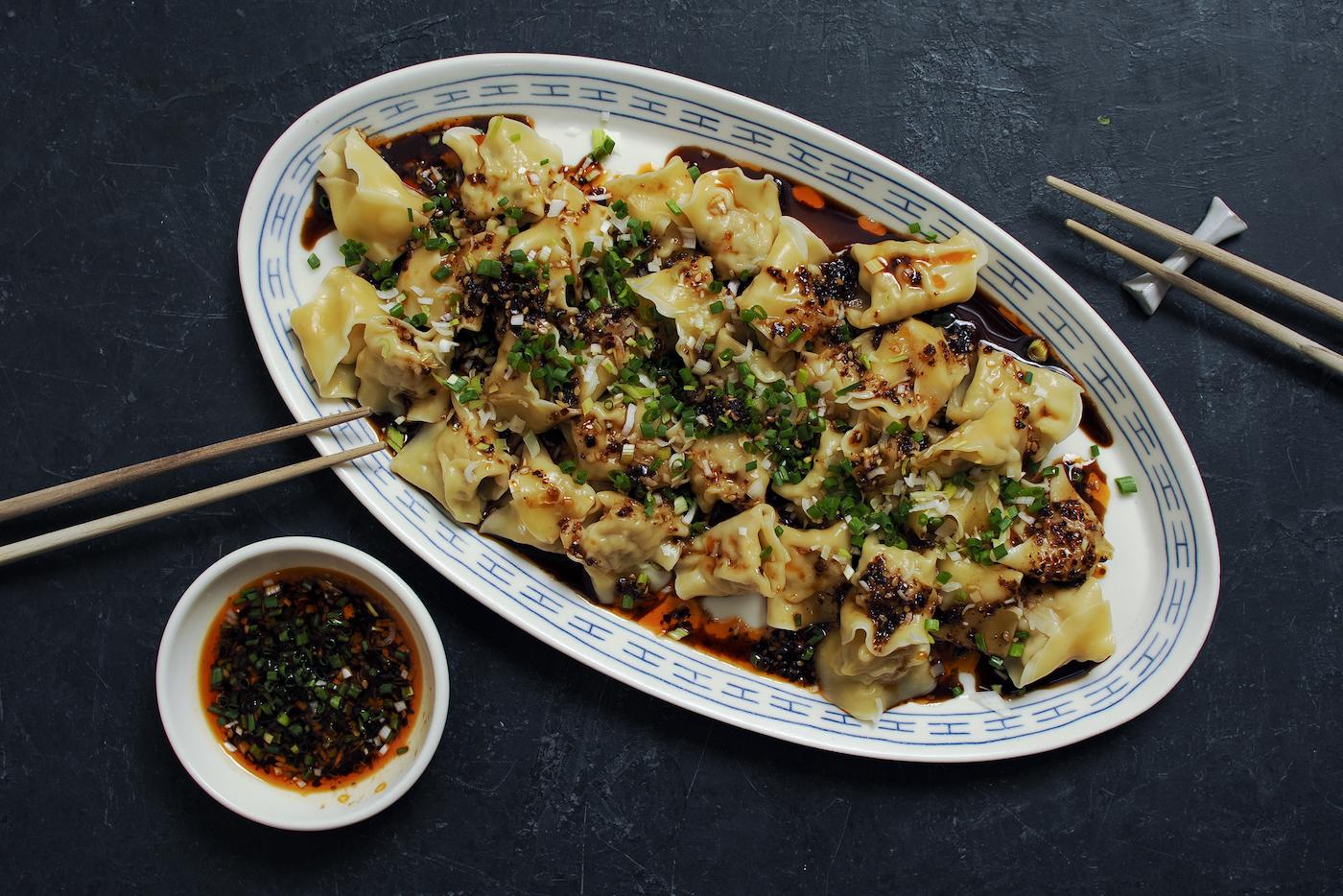 “I feel like one of the reasons why I get so into the design of this stuff is because I just like to eat so much,” says Chutinthranond of her ceramics, which are sometimes inspired by a dish she has cooked. Photo: Courtesy Jack X. Li

Chutinthranond mostly works in porcelain, which is non-porous and more durable than other ceramics, making it suited for everyday use—Monsoon Pottery pieces are safe in the dishwasher, microwave, and oven. This is a conscious choice on Chutinthranond’s part: while she also loves the look and “buttery” feel of porcelain, she wants her work to be used, not just admired. She delights in seeing how customers combine different sets of platters, or what they plate on her dishes—thinking about it fires her visual imagination.

She fires her ceramics in an electric kiln located under a vast hood in the garage of her home. Her neatly organized studio takes up the first floor of the row house; the bathroom’s shower is stacked with buckets of glaze. She was diagnosed with a back injury last year due to the amount of time she spent bending over a pottery wheel, applying force to clay to shape it, and has had to adapt her work as a result: less wheel, more molds and decorating, new types of work that she can make with the help of a studio assistant.

But she doesn’t necessarily want to grow too much beyond her current production capabilities. Her dream is to have a studio in Syracuse in addition to Chicago, so that her mom could decorate her work. “My mom’s really artistic,” she explains. “She’s a pastry chef, and she expressed herself that way, through her work at the restaurant,” as well as in her garden and arrangements of her own flowers.

Some of Chutinthranond’s work incorporates flowers, both in the form of vases and as decorative elements. Her Chinatown series includes a platter with chrysanthemums, which carry great symbolic weight in East Asia, rendered in a blue-and-white style similar to the treasured porcelain of China’s Ming Dynasty.

“There’s all this stuff that’s embedded in Ming Dynasty-era stuff, where it has to be super sharp and crisp and detailed,” she says. “In the beginning, I was trying to go along with that a little bit. But as my practice has progressed, and as I reflect on my own identity through my work, it seems sort of liberating to be a bit looser, and to be almost subversive to what others might perceive to be the way that I should be doing my work as an Asian artist, if they don’t know that I’m an Asian American artist. After a few years, I’m thinking a bit harder about, what does that mean for me? Do I want to put myself in this box?”

Growing up as an Asian American in a relatively white city, she loved Chinatowns in New York or Toronto both for their food and because they were a space where she felt she wasn’t sticking out or being looked at. But she doesn’t want to only make work that incorporates styles that explicitly signal as Asian. Her Asian Farmhouse collection is more rustic and less tied to traditional iconography. “It’s kind of what I want to eat off,” she says.

Because ultimately, her work exists to be used. “Food is the best,” she says. “It’s so fun, you can have better conversations when there’s tons of good food around, and when you make a really good meal, you’re inviting the people that you care about the most. And just having the food isn’t enough. It’s sharing it.

“For me, it’s about supporting that, and just elevating it even more, because the visual component is so important to me.” With the perfect serving piece, an outstanding dish can become even more memorable, or, in Chutinthranond’s words, “The volume would get turned up on an already amazing experience.”