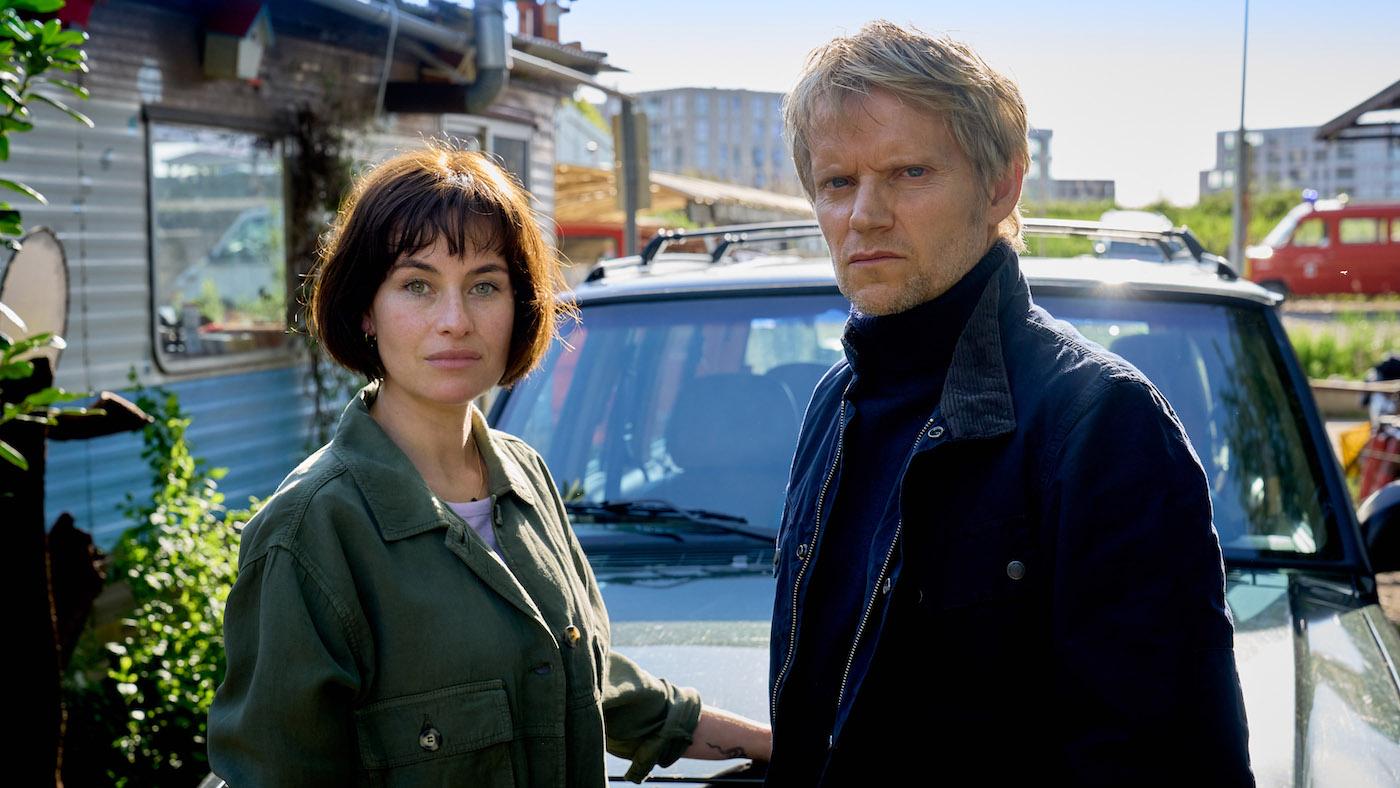 Van der Valk airs Sundays at 8:00 pm and is available to stream. Recap the following episode and previous season.
Keep up with your favorite dramas and mysteries by signing up for our newsletter, Dramalogue.

In a field outside Amsterdam stands a scarecrow. It’s made not of straw but a dead woman, an “X” cut into her stomach. She’s a lawyer named Susie de Windt, and was probably killed somewhere else—perhaps via the injection mark in her wrist. She’s been there a couple days. An antique-looking note references ethics and “XX”—is there another body to be found, with two Xs?

De Windt’s husband, Roland, is also a lawyer at the same firm, as well as a published historian. He hasn’t seen Susie for three days, but didn’t seem overly worried: he didn’t even call her during that period. She seems to have been staying outside the city: she took a bus back early the morning she was killed.

The land on which her body was found has lately been in the news. It’s owned by the city of Amsterdam, and is due to be the new home of a group of squatters living in the city on a polder (a term for low-lying land) once they are relocated. The squatters just lost a court case to keep the land on which they have built a community, and Susie de Windt was the lawyer who successfully made the case against them.

Cassie Davids, the lawyer who represented the polder community, is as alternative as the artists who live there. She tells the detectives that the polder will now be developed by a consortium into a tourist attraction with a Ferris wheel.

The detectives are stumped by the note accompanying Susie’s body—until Job returns to the job after being exonerated for shooting a man who was trying to kill Van der Valk. He realizes that the reference to ethics is an allusion to the Amsterdam philosopher Baruch Spinoza and his magnum opus, Ethics. And the coroner Hendrick discovers, when he tests the ink the note is written in, that it’s a type that Spinoza would have used. Also, whoever wrote the note was left-handed.

Certain that another body is due to be found, Van der Valk has divers search a canal near a statue of Spinoza. They find a woman’s corpse. Two Xs are cut into her back, and another antique-style note is wrapped in plastic and stuffed into her mouth.

A postmortem reveals that the woman is Juliana Holt—she had once been arrested for taking part in an environmental protest, so her DNA was in the police system. She was a public relations person who championed Amsterdam and its alternative lifestyles. She died by drowning.

Susie de Windt, meanwhile, was killed by rat poison. Light bruising on her neck and arm suggest abuse that predated her death.

When Van der Valk and Lucienne visit Holt’s apartment, the door is unlocked and music is blaring. An X on the wall is revealed to be part of a statement when the lights are turned on: “Exile Betrayal.”

Spinoza knew exile and betrayal, as part of a community of Portuguese Jews living in Amsterdam.

The note found with Holt again references Spinoza, and asks “Who owns the city?” And there’s a warning in the note: “Tick tock.”

The Xs recall the three Xs on Amsterdam’s city flag, which refer to three trials of the city: flood, plague, and fire. Susie de Windt’s death represents plague (rat poison), while Holt drowned as in a flood. So a third victim will be burned to death—but who will it be?

The note also says something about a “fire-stealer,” a reference to Prometheus. The consortium due to build on the polder is called Prometheus. Is its head, Ruud Lipman, the next target?

When Van der Valk and Lucienne rush to his apartment, they find a steak burning on the stove, and Lipman burning on the balcony. Lucienne puts out the fire and rushes Lipman to the hospital while Van der Valk searches for the perpetrator. All he finds is a pizza box—the assailant got in pretending to be a delivery person—with a Spinoza book inside.

Three Xs are carved into Lipman’s back, but where is the note?

Roland de Windt has a chapter on Spinoza in his book, so he is a prime suspect, but denies any knowledge or involvement. Even when surveillance footage of him at a car dealership with Juliana Holt surfaces, he says he was just having an affair with her. (The detectives noticed that Holt had a new car even though her brother said she was having money problems, so they searched the dealership where she bought it for clues.) But Roland has an alibi for the attack on Lipman: he was visiting Susie’s relatives, offering them his condolences.

Another suspect is Django Keet, one of the residents of the polder community. Susie had filed a harassment case against him, which he explains was because he followed her so that she would know how it feels to be watched—she had hired spies in the community for the court case.

When Van der Valk orders surveillance of the community, Django again notices and slips out unseen—at the same time that Ruud is murdered, the police realize after the fact. And Django is an artist who works with ink—but he’s right-handed.

When the police try to question Django about Ruud’s murder, he’s missing from the polder. He told Clara, a woman from the community with whom he’s having an affair, that he was going to see Roland de Windt. The police rush to the law firm and narrowly prevent Django from attacking Roland.

Django says he discovered that Roland fixed the court case by bribing an official. Django slipped out of the polder to go beat said official, who will not have reported the assault because of their corruption but will be in the hospital—a confirmable fact. He also says he recognizes Holt as a woman who was helping the community by putting together a glowing PR report about them.

But the report never surfaced—thanks to another bribe from Roland, who was not having an affair with Juliana but bought her a car to prevent her from swaying the court case.

All of this was documented by Susie—as was her abuse at the hands of Roland. She was out of the city for several days before she died because she was staying at a shelter for battered women, and she told them about Roland’s abuse and bribes. But Roland has an alibi for Lipman’s attack.

Perhaps the ink on the notes is a clue. Holt’s last text was to a woman named Rita Wijngarden about a date. Brad has seen Rita, who is bisexual, on his dating apps—and her profile says she makes ink. Van der Valk sends Brad on a date with Rita, and wires him up for surveillance.

She’s left-handed, and when Brad awkwardly brings up ink and Juliana she becomes suspicious, asking him if he’s the person who bought ink from her and then set her up with Juliana, thinking they would be good for each other. She leaves but is stopped by Van der Valk, who reveals why they are questioning her. She gives the police a list of customers to whom she has sold ink.

Van der Valk retreats to his houseboat, where his latest paramour, Lena, is waiting. She saved him from some young tourists who wanted to have a good time with him, and he is surprised by his fondness for her—he even answers the phone when she calls, to Lucienne’s surprise. But their evening is interrupted by a noise outside, and Van der Valk finds a still-smoking cigarette.

The next day, he is called to meet the polder community’s lawyer, Cassie Davids. She was the one outside his houseboat. She wanted to offer herself up for interviews, given that she was sleeping with Ruud Lipman, who has now died in the hospital. But Van der Valk dismisses her; she’s not the killer.

The final note is found in Lipman’s stomach. It warns of “one last big bang.”

Among Rita’s customers is a Ben Hawthorne, which via various translations is an alias of Baruch Spinoza. The address is at a pier in The Hague where Lipman’s father built a Ferris Wheel after another community was relocated. Brad and Job find evidence of all the murders at the address. But what is the “big bang?” And who is the next victim?

Tonie Alderlink, an inventor who lived in the polder. His parents lost their livelihood at the pier at The Hague, and now the same is happening to him. He’s both victim and perpetrator: he’s planning to blow up the pier and himself, having already killed three people involved with the desctruction of the polder community. As Lucienne disarms explosives under the pier, Van der Valk tries to talk Tonie down. But the police superintendent makes a call and has a sniper take Tonie out. The button he was holding to set off the explosives falls, but they have been disarmed—and his vest full of explosives just sets off confetti.

Tonie was livestreaming everything—so Van der Valk’s lover Lena has recognized him in the footage and now knows what he does for a living. He tells his colleagues that he has moved on from her. There’s a new lady in his life: a retired police dog for his boss, whose previous one died.