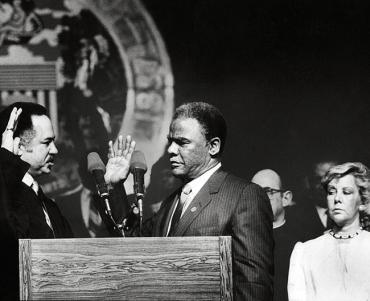 Harold Washington, an African-American politician, built a coalition of blacks, Latinos, liberals, and the city’s disenfranchised to beat incumbent Mayor Jane Byrne and Richard M. Daley in the mayoral election of 1983. Washington’s time in office was one of great energy for the city’s black population and for neighborhood empowerment. However, he faced great opposition in the City Council from the remnants of the old Daley Machine that had successfully wrenched the office from Wilson Frost years earlier. Washington was elected to a second term and died in office shortly thereafter. Alderman David Orr briefly held the office until December, 1987, when the City Council named Alderman Eugene Sawyer the city’s second African-American mayor.

When Harold Washington was elected mayor, his supporters gathered to celebrate his victory singing solemnly and sweetly, “We Shall Overcome.