From Riots to Renaissance: Black Business

DuSable to Obama | From Riots to Renaissance | Black Business 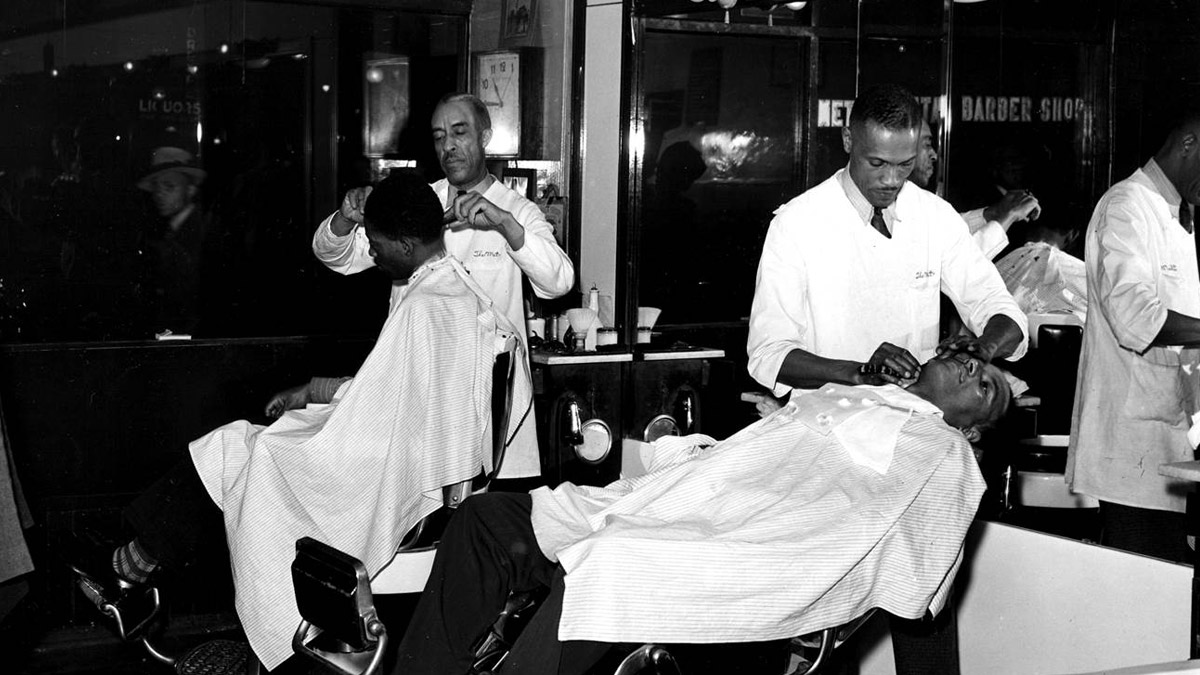 From Riots to Renaissance: Black Business

The seeds of Bronzeville's thriving economy were sown in the population boom of the 1910s and '20s. As the number of blacks in the city soared during the Great Migration, demand for goods and services rose and businessmen and entrepreneurs rushed to satisfy the needs of black consumers. Drug stores, barber shops, fish markets, beauty parlors, florists  everything a resident could want or need was found close to home in the busy shopping districts of the black community.

Though black businesses were dramatically out numbered by those of whites, they received the support of community campaigns encouraging residents to shop in black establishments. Civic organizations, social clubs, even preachers used their pulpits to promote the concept of the "Double Duty Dollar," making a dollar do double duty: first through purchasing a good or service, and second by supporting racial progress through shopping at black owned stores.

However, black businesses faced unique challenges. Financing from traditional banks was hard to come by, if available at all; white property owners refused to rent to blacks or charged exorbitant rates; blacks were in competition against white merchants with more resources; and some blacks believed that black businesses were inferior to those of whites.

Still, with most downtown stores unwelcoming, if not off limits to blacks, there were few choices beyond the black neighborhoods. As Bronzeville's population grew more affluent  and racial pride, along with political activism, blossomed  this city within a city embraced the idea of financial power and economic control and in the process generated a dynamic, multi-million dollar black economy. 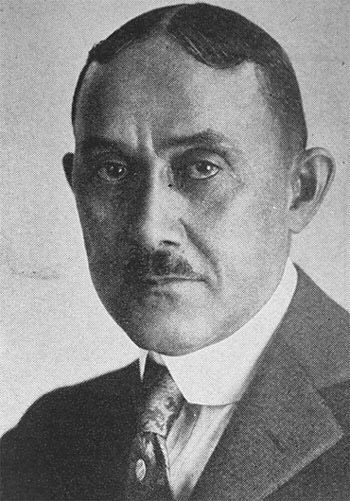 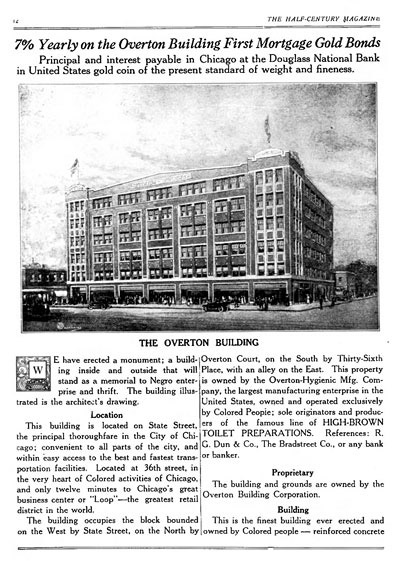 Anthony Overton built the Overton Building as a monument to "Negro enterprise and thrift."

As a businessman and social activist, Anthony Overton recognized the importance of black-owned and -operated businesses to the community. A key figure in the economic development of Bronzeville from the mid-1910s until the early-1930s, Overton was committed to racial advancement and built his companies exclusively with black financial capital and staffs.

Born in Monroe, Louisiana in 1865, Overton was the son of newly freed slaves. Despite challenges the of race and class, he went on to great achievement earning a law degree, serving as a municipal judge, and later founding the Overton Hygienic Company in Kansas City, Missouri, which manufactured and sold baking powder, flavored extracts, and toiletries.

With a move to Chicago in 1911, Overton expanded his facilities and increased his product line to more than 100 cosmetics, which were distributed internationally. Later, reaching for new markets, Overton became the first black cosmetics maker to place products in Woolworth drug stores.

Overton's diverse business holding included publications. In 1916, he launched Half Century Magazine, followed by the Chicago Bee newspaper in 1926, a direct competitor to the popular and influential Chicago Defender.

A personal highlight of Overton's career was the founding of the Douglass National Bank. He followed that endeavor by opening the Victory Life Insurance Company.

Overton's businesses continued to prosper and grow until bank panics in 1932 shuttered the Douglass Bank and hampered his insurance company. His publications were gone by the 1940s and Overton was forced to scale back his manufacturing operations, which he controlled until his death in 1946. 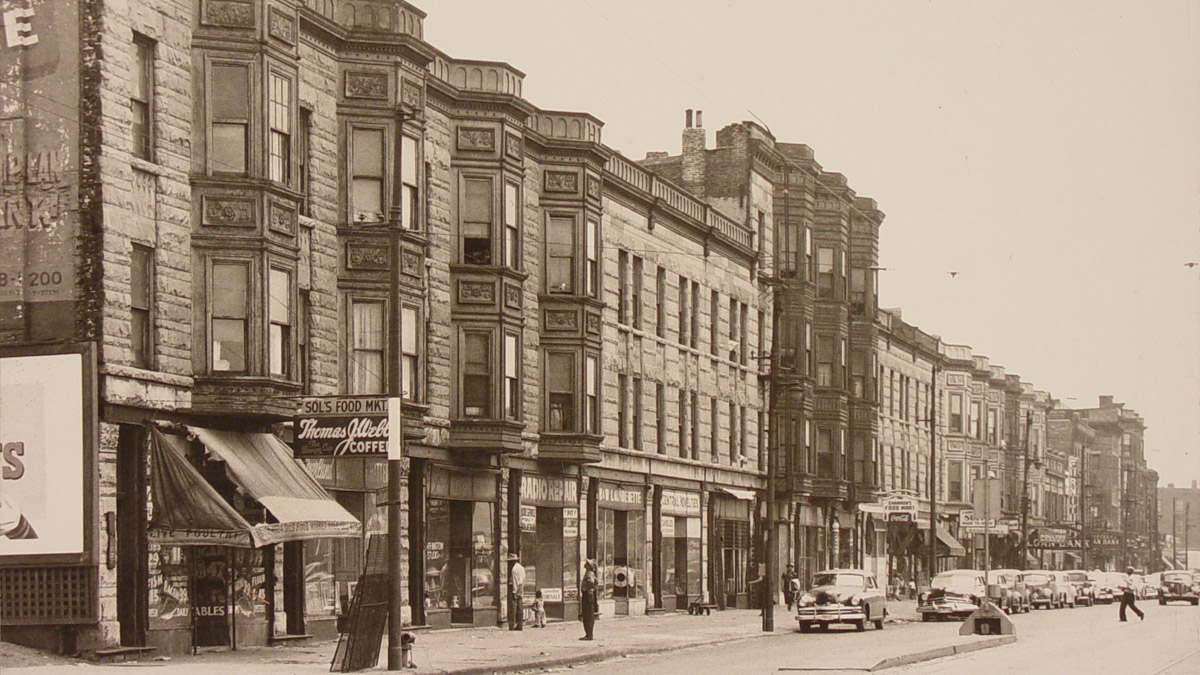 Jesse Binga arrived in Chicago during the 1893 World's Fair and stayed in the city to build his fortune among Chicago's growing black population. In 1898, with $10 as capital, Binga started a real estate business by leasing run-down buildings, making necessary improvements, or subdividing the property, and then renting the properties at a higher rate. Within 10 years, Binga had developed a large and profitable enterprise.

Discrimination in lending provided the inspiration for Binga's greatest vision: Chicago's first black-owned bank. In 1908, Binga established a private institution he named the Binga Bank. It was an immediate success and helped to plow the financial ground for the development of Bronzeville. In 1921, the private bank was reorganized as the Binga State Bank under the protection of a state charter.

Binga's financial holdings made him a national figure in black business, but his wealth and notoriety didn't protect him when he bought a home in an exclusively white neighborhood. The property was bombed five times, however Binga refused to be intimidated or forced out by violence. With the same force of will, in 1929 he built the impressive Binga Arcade at 35th and State. The five-story building housed the bank, extensive office space, and shops, along with a rooftop dance floor and established the area as the premier business center in Bronzeville.

With the Great Depression, Binga's grand empire came to an end. State examiners closed the bank in 1930. The next year, Binga was convicted of financial irregularities and given a 10-year sentence. The shuttering of Binga's bank and his subsequent incarceration was a blow to racial pride in the community. Still, in 1938, the famous attorney Clarence Darrow appealed for Binga's release, and 10,000 community members signed a petition in support of giving the former banker his freedom.

Jesse Binga was paroled to the custody of a Catholic priest in Bronzeville. He worked menial and other jobs until his death in 1950. 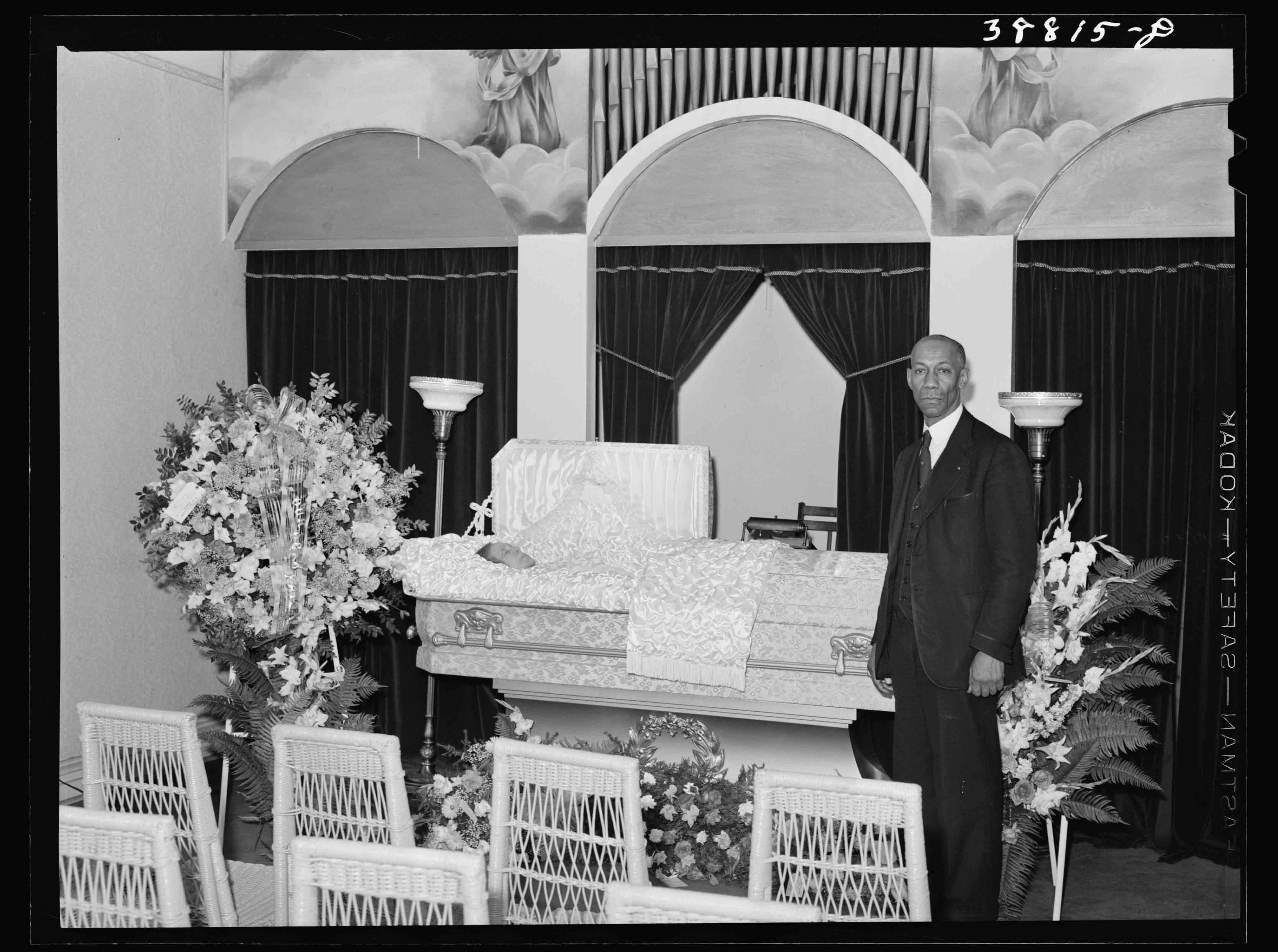 Funeral parlors were strong businesses that contributed to Bronzeville’s economy. Because the funeral industry was strictly segregated, blacks could only use burial services in their community. This led to competition among local funeral homes, but no financial drain to outside service providers.