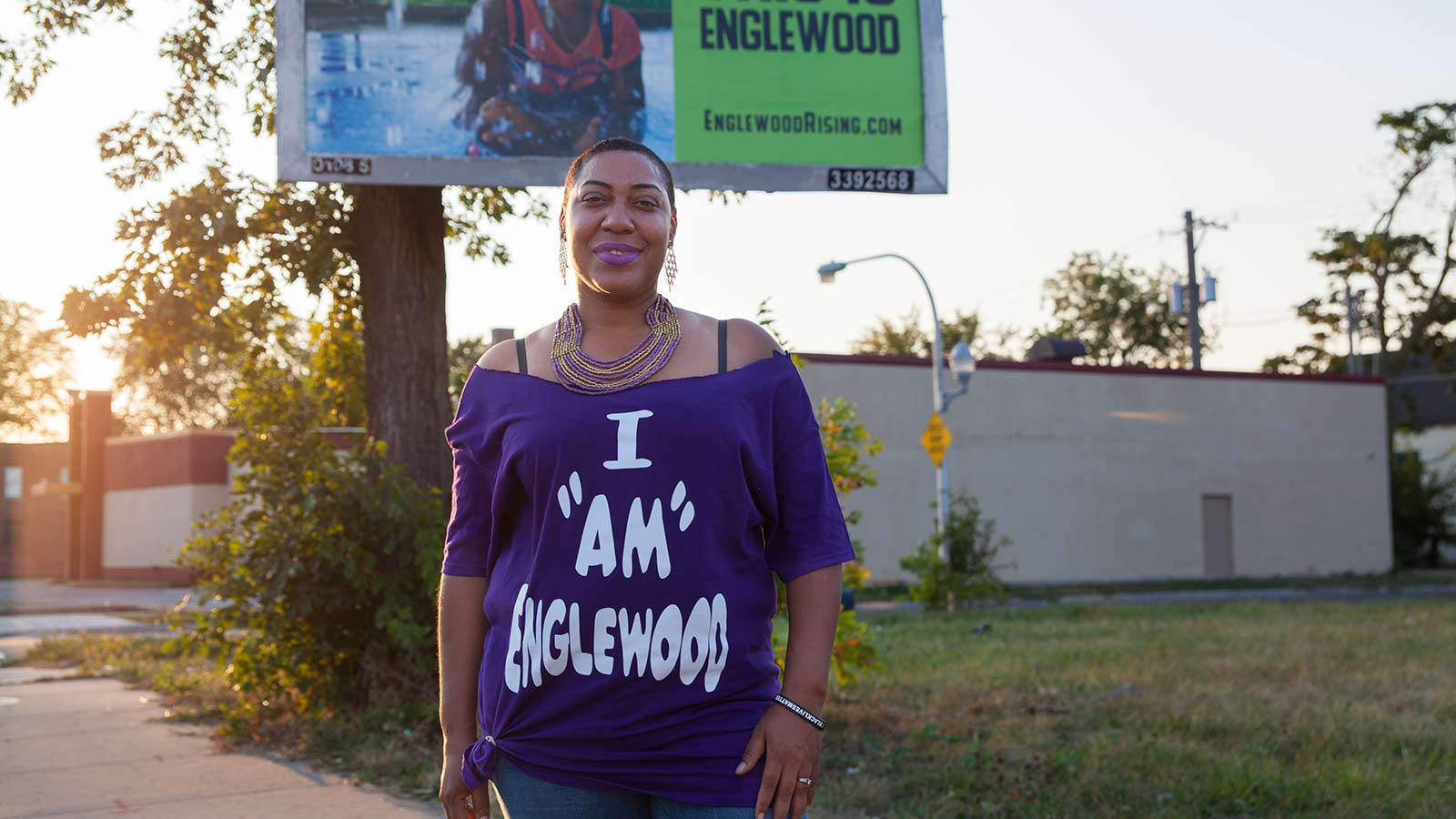 On a mild, August evening in Chicago’s Englewood neighborhood, tiny kids in face paint and party hats dance frenetically and earnestly to pulsing beats as onlookers cheer. A boy does long wheelies on a flashy, white bike as other pint-size cyclists careen down a grassy hill.

Robert and Leonard Washington, brothers in their 60s who have lived in the South Side Englewood neighborhood their whole lives, smile as they watch kids in the two bouncy houses that they rent out for community events.

This is Ogden Park, where the Resident Association of Greater Englewood, or R.A.G.E., is hosting one of their So Fresh Saturday summer events. Every other Thursday, R.A.G.E. stages similar events, called Rock the Beat, in conjunction with the local police district.

“The idea is to reclaim these public spaces, to make sure young people feel safe and have a festival in their own community, so they don’t have to schlep downtown,” said R.A.G.E. co-founder Asiaha (pronounced “Ay-sha”) Butler, 41.

Despite the fun and peaceful atmosphere, to many outsiders, Englewood is a notorious symbol of Chicago gun violence and disinvestment. Reminders surround the park, but don’t disrupt the day’s festivities. A police car with blue lights flashing races past the park and vacant lots and boarded-up apartment buildings. The nearby commercial strip of Ashland Avenue is home mostly to empty storefronts, liquor stores, and a motel with hourly rates.

As of July 2017, Englewood ranked sixth of Chicago’s 77 communities for violent crime, according to analysis by the Chicago Tribune. The median household income is about $24,000, less than half the citywide rate, and 43 percent of families in Englewood live below the poverty line, according to census data.

Such things are what almost caused Butler, an Englewood native, to leave town nearly a decade ago. She was especially worried about her young daughter’s safety and her family’s future after a bullet pierced their front door. Around the same time, someone tried to break in through her daughter’s window. She and her husband contemplated moving to Atlanta.

But instead of fleeing Englewood, Butler decided to stay and make a change in the neighborhood.

“I realized that if I leave, I’m not better than anyone else who has left. So I asked myself, ‘What can I do to give back?’”

“Looking out at my community, I realized that if I leave, I’m not better than anyone else who has left,” she said. “So I asked myself, ‘What can I do to give back?’”

Butler refuses to dwell on the violence, poverty, and disinvestment. Instead, she has made it her mission to highlight and nurture the positive forces that do exist in Englewood, from its tight-knit community to rich history to eager youth.

“The major assets of our community lie in the spirit of the people — their resilience, commitment to community development, and the dedication to actively engage in projects or issues that impact them,” Butler said.

Community organizing and activism come naturally to Butler, who notes that her grandmother was active with Operation PUSH, the civil rights and social justice organization founded by the Rev. Jesse Jackson in the ’70s. Butler has a master’s degree in inner city studies from Northeastern Illinois University, and she has served on various local boards, advisory councils, and the local school council at Paul Robeson High School.

Butler and her husband, Antoine Butler, also an Englewood native, felt their first move was to connect with youth and to try to get young people talking with their elders. So they started showing a series of documentaries, inviting young and older people for “Docs and Dialogue” at libraries, parks, and other locations. They chose films to spark in-depth conversation about provocative issues such as misogyny in hip hop, violence in video games, and the ways societal ills from slavery to drugs have affected black women over time. In 2010, Butler founded a youth journalism program called Media-N-Motion, where she led youth in making videos, writing articles, and publishing a newsletter examining how Englewood was portrayed in the media.

Around that same time, along with other community members she founded R.A.G.E.

“They said they were tired of outside organizers coming into the community telling us what we need,” he said. “I was hooked. This is a grassroots community organization working for the community.”

Now R.A.G.E. has more than 260 members, many achievements under its belt, and even bigger dreams. 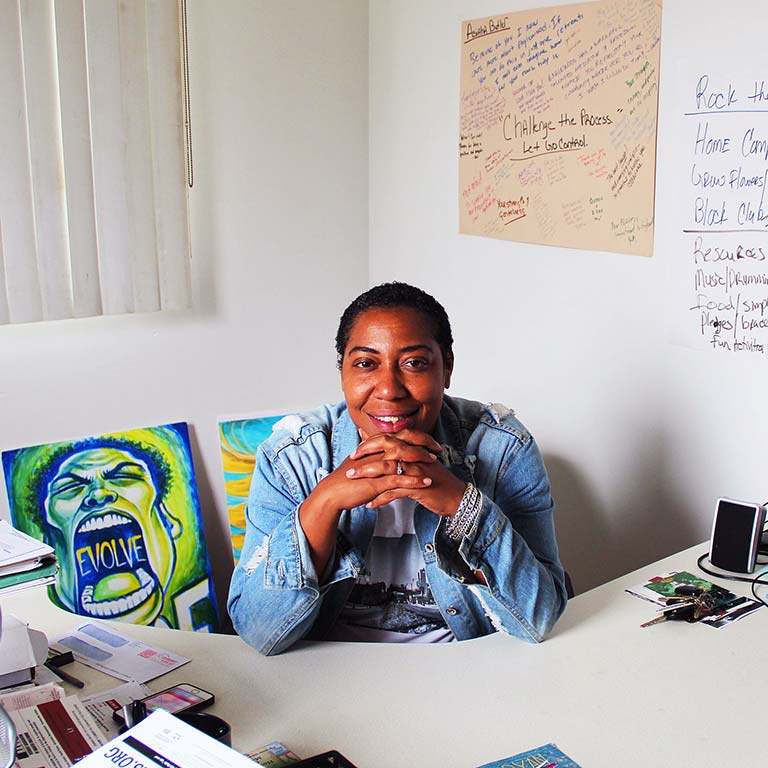 A year ago, Butler quit her day job with a real estate trade association to work on R.A.G.E. full-time. She opened a R.A.G.E. office in the building she owns across the street from her home, adjacent to a once-vacant lot she bought from the city for $1. She turned it into a grassy lawn for community events. R.A.G.E. has helped other residents similarly buy vacant lots from the city and improve them.

Butler also has ambitious plans for a recently shuttered local school. She and her allies want, among other things, to work with the city to turn it into an affordable housing complex and an urban farm. As Butler walks the perimeter of the shuttered Arna Bontemps Elementary School, which was among almost 50 schools controversially closed in 2014, she points out how the shuttered gym could be a workforce development center and how the farm could provide much-needed jobs for residents.

The school sits adjacent to an abandoned railroad line that city officials and the Norfolk Southern railroad company have promised to turn into a trail akin to the hugely popular Bloomingdale Trail (or “606”) on the North Side. Butler imagines the transformed school as a gateway to the trail, hosting a small visitor center.

Englewood community leaders are in the strange position of fighting for more investment and development, even as they also worry about gentrification and displacement that could happen since the neighborhood is near the expressway and just south of the trendy Bridgeport neighborhood.

Some murmured such fears when a Whole Foods opened last year to much fanfare, along with a Starbucks and other businesses in the new Englewood Square development on 63rd Street. Butler and other R.A.G.E. members are involved in discussions with city planners to make sure Englewood Square and other developments are created with residents’ input and residents’ needs in mind.

“It’s connecting the dots between investors and residents so we’re all working with the same blueprint,” she said.

Butler is determined to “rebrand” Englewood, which to her means “community development without the buildings.” In other words, she wants to help residents recognize and augment the positive things that already exist in their neighborhood and, in the process, motivate more residents to help change Englewood for the better. This has led to the creation of a social media and outreach campaign called Englewood Rising. 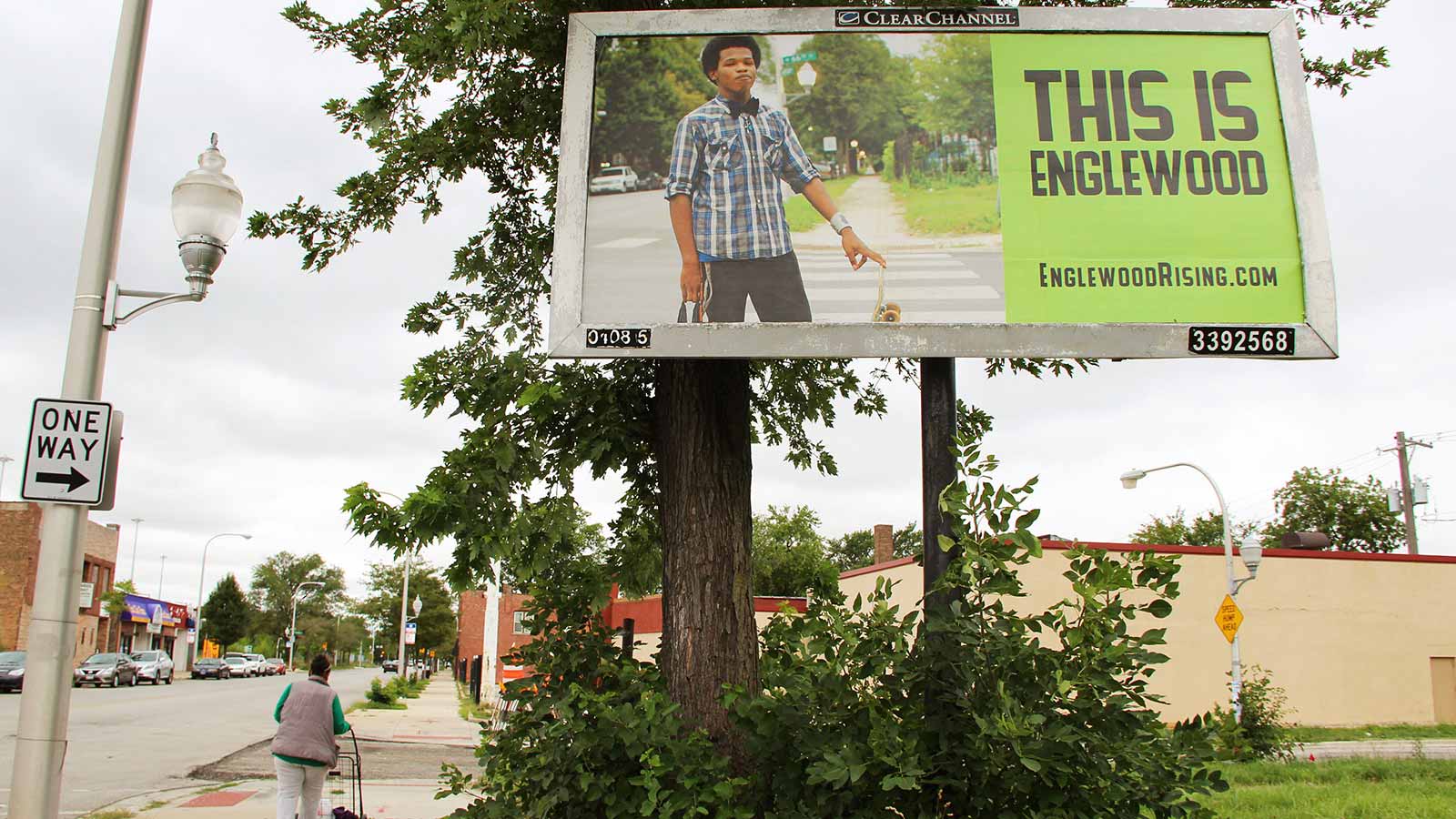 Throughout the neighborhood there are billboards with the URL “englewoodrising.com” under beautiful pictures of Englewood youth: a girl with a gorgeous mane of natural hair framing a warm smile, two brothers sitting side by side as the sun sets, a boy with a skateboard winking confidently at the camera. The billboards also bear brief slogans, such as “I Am Englewood” and “Welcome to Englewood.”

On the Englewood Rising website, residents are invited to share their images, stories, and thoughts about “the incredible impact you, and those around you, make on Englewood each day.”

R.A.G.E. commissioned these billboards, featuring the work of local photographers, to run for at least nine months. The billboards were paid for by small donations from community members and by a $10,000 matching anonymous donation.

“Every meeting we’re passing around the hat, like in church. People are giving one dollar or two dollars or three dollars,” Butler said.

That money has also paid for equipment for the Ogden Park Vikings football team and for scholarships for three youth who are gunshot victims.

At a recent So Fresh Saturday event, residents noted that shootings are a daily fear and reality. But they said events like Rock the Beat and So Fresh allow kids to just be kids and hence have a larger effect on addressing violence and gang tensions. 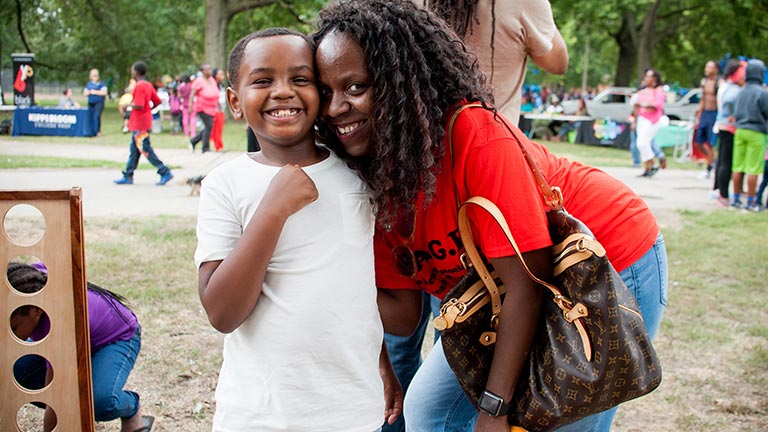 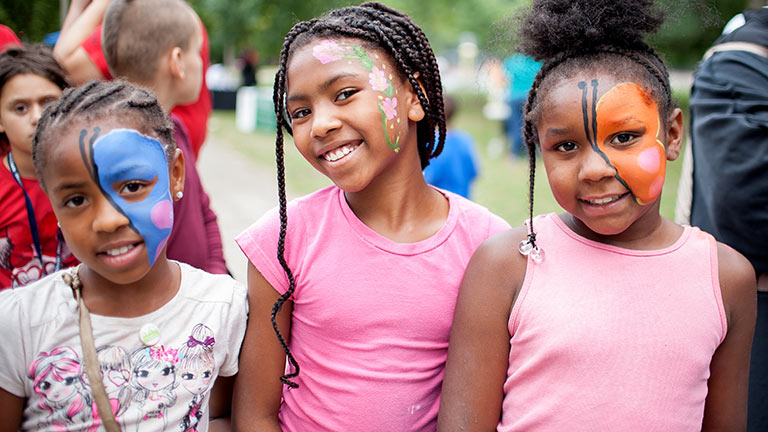 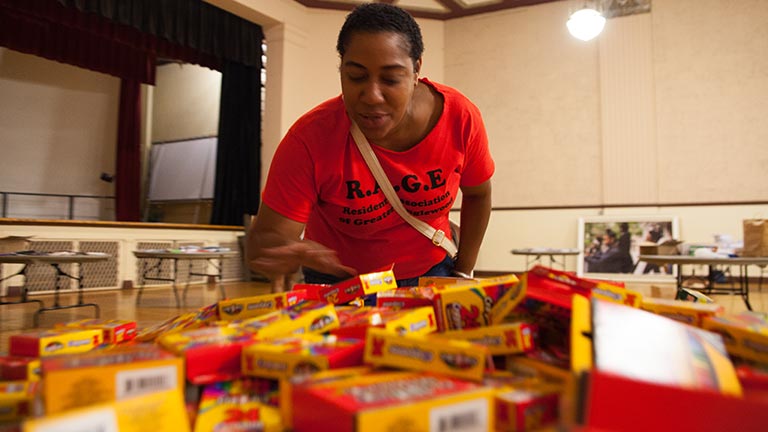 “I just love to see the kids out here having a great time, running around, eating hamburgers and chips,” said Robert Washington, who also works with the organization Teamwork Englewood, a frequent partner of R.A.G.E. “If we can reach these little ones, we can start to change things.”

Carlos Estes, government relations and community engagement director for the nearby Ombudsman Alternative High School, said the work of Butler and R.A.G.E. should be a model for other neighborhoods.

“If only 100 organizations were doing what they are doing, popping up right in the midst of things and inserting peace,” he said. “It sends a signal that there can be unity, young people coming together, talking with one another, and building bridges and starting conversations.”