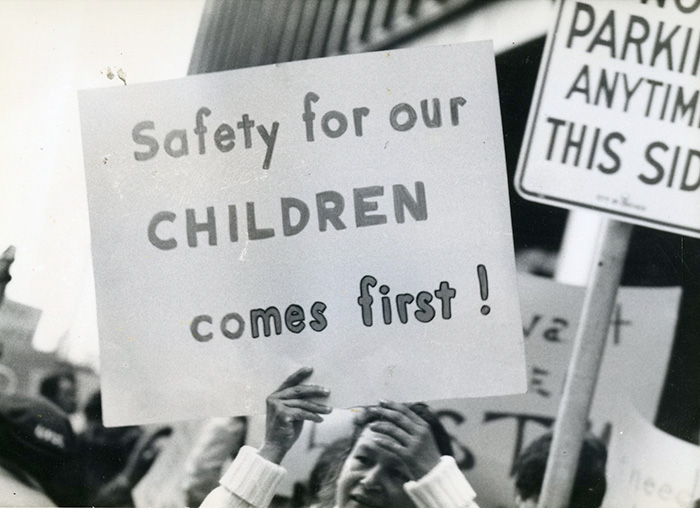 A lone hand holds up a sign at a protest in Pilsen. Courtesy of Teresa Fraga and Special Collections and Archives at DePaul University Library, Chicago, IL

According to gang expert John Hagedorn, “You can’t really tell the story of any Chicago neighborhood without telling the story of the gangs.”

In Pilsen, that story is one of that can offer hope and, possibly, instruction for policymakers and community organizers working to decrease violence in other Chicago neighborhoods.

Starting in 1970, Pilsen’s homicide rate was consistently higher than the citywide average. At its peak in 1979, there were 67.4 murders per 100,000 residents, more than double the city as a whole at that time.

Things didn’t improve much in the late 1980s and ’90s, when Hagedorn says a number of splinter groups in Pilsen battled for power and territory. A Chicago Tribune article from 1988 counted 21 different gangs along the two-mile stretch of 18th Street between Des Plaines and Western at that time.

In the ’90s, gang wars escalated throughout Chicago, and Pilsen was no exception, says Hagedorn. Party People, La Raza, Ambrose, and the Satan’s Disciples all suffered devastating amounts of bloodshed.

There are few who lived through that time in Pilsen history who were untouched by the violence. But there were many who worked to confront it. And what seems to have worked is not just one person or program, but many of them working in concert, along with successful neighbors who created what Hagedorn calls “pockets of prosperity” – and hope.

Lucy Gonzalez moved to her home near 18th Street and Bishop in the early ’70s and spent many years as a beat representative as part of a program that predated the Chicago Police Department’s CAPS program.

“I’ve seen many kids come and go, get shot, drop dead,” says Lucy Gonzalez, who has 2 daughters and 4 sons, one of them informally adopted after he was abandoned by his father.

Her son, Bobby, lost his best friend to the violence.

She, like many Pilsen residents, did everything she could. On occasion, she says, that meant confronting gang members directly.

“They’d always be hanging around 18th Street,” she said. Some of them grew up with her kids. She knew who they were. Most people did.

Many other Pilsen residents still work in collaboration with neighbors on their block, organizing phone trees, and calling each other whenever there is suspicious activity, so that everyone can walk outside or call the police together. That way, no one individual assumes the risk by him or herself.

Block clubs and ad-hoc neighborhood coalitions have also worked with their churches or with the police department to target known gang houses, seeking out code violations, putting pressure on absentee landlords or homeowners, or simply providing information. 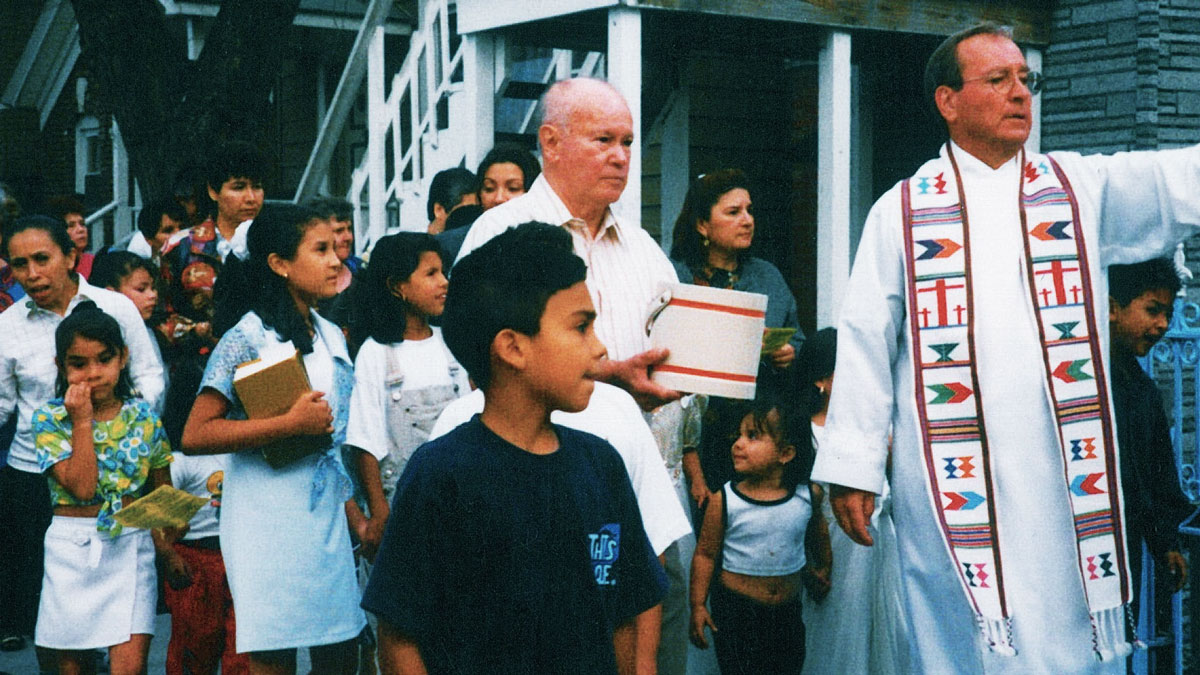 In the early ’90s, a neighborhood coalition also succeeded in placing a moratorium on new liquor licenses in Pilsen which, before then, had more bars and liquor stores than any other Chicago neighborhood. Several studies have found a significant correlation between crime and the number of bars on any city block.

According to Hagedorn, all of these efforts are vitally important. They create community cohesion and can make a big difference on individual blocks.

But in Pilsen, he thinks another, often overlooked factor has also been instrumental: the influence of successful neighbors.

"Violence proliferates in places where people don’t have hope."

“Homicide is correlated with the desperation of young men,” says Hagedorn. “Violence proliferates in places where people don’t have hope.”

What is different about Pilsen today compared to 25 years ago, Hagedorn says, is the number of people – some of them former gang members themselves – who have created what he calls “pockets of wealth.” Whether or not they are making a concerted effort to do so, they are giving the younger generation hope.

He points to New York, where homicides hit a peak in 1990 and have been steadily declining ever since, even though poverty rates have remained relatively stable.

Poverty Rate in Pilsen and Chicago

Pilsen’s poverty rate and jobless rate haven’t improved markedly since the ’90s. But Hagedorn says that isn’t the most important metric – as long as there are one or two success stories on every block.

“Poverty itself is not related directly to violence – inequality is and lack of development,” he said.

Hagedorn said that recent discussions about sending in federal troops or increasing the police presence ignore the underlying problem, which is more complicated to address, but much more effective.  “What they need is hope,” he said.

That’s why it is also crucial that there are entry points – opportunities to learn, to develop skills, and to thrive. In recent decades, educational, job training, and after-school programs available to Pilsen teens have proliferated. As of 2015, according to an analysis by the University of Chicago’s Great Cities Institute, there were 87 registered nonprofit organizations in Pilsen, most of them catering to youth.

More people are finishing high school and more are going to college. While several of these people have left the community, just enough of them have either stayed in or stayed connected to Pilsen, giving young people a living, breathing example of what success looks like.

“What’s happening in the Mexican community is more similar to what’s happened with white ethnics,” says Hagedorn. “The Irish started off poor, with a lot of in-fighting with gangs, and they became more wealthy and violence decreased. In the black community, while you have a small middle class, the majority has stayed distressingly poor.”

He adds, “The Mexican community is more dynamic, and Pilsen is a great example of that.”

The growing political power of the Latino population is also working to improve young people’s prospects, even among those involved in gangs. As a result, they are less eager to engage in violence, says Hagedorn, and more open to finding other ways to leverage alliances, exert power and access the job and economic opportunities now available in the neighborhood.

That isn’t to say that the gang problem has gone away – but the violence problem isn’t what it used to be.

“They have more to gain and more to lose,” said Hagedorn. “They, too, are part of the community.”

That’s not to say that Pilsen is insulated for Chicago’s gang violence. Last year, as gun violence escalated in Chicago overall, Pilsen saw 10 homicides. It was the most bloodshed in a single year in the neighborhood since 2002.

But, on average, things have gotten markedly better. Residents are hoping that trend continues and that other community leaders and policymakers can learn from Pilsen’s improvements and apply its lessons elsewhere.

“Understanding this is key to understanding how to combat ongoing violence, particularly in neighborhoods that aren’t as economically viable as Pilsen,” said Hagedorn. 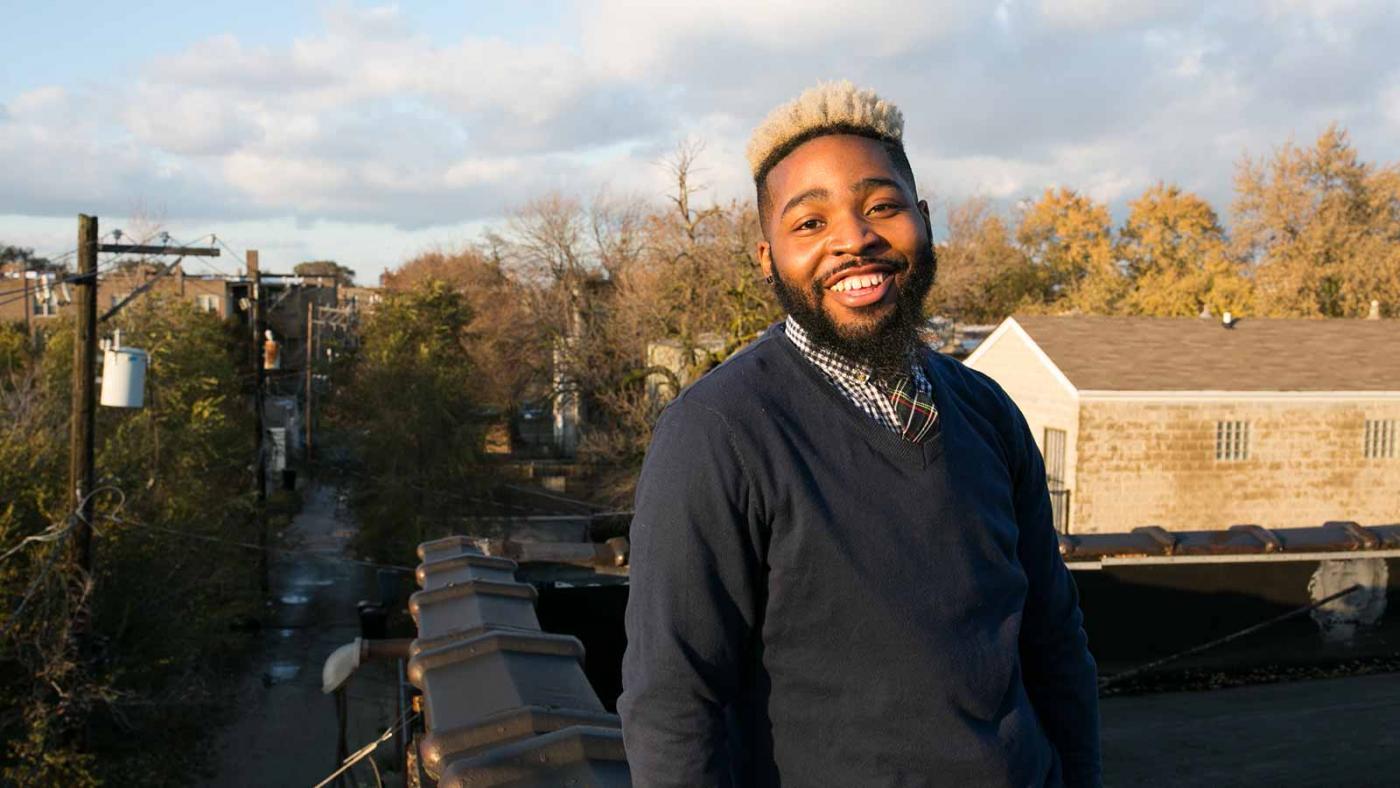 Jeramey Winfield is a 26-year-old North Lawndale native who was introduced to the concept of restorative justice while in high school. He now facilitates restorative justice in his community as a way to help heal divisions, support residents, and combat the violence that has affected many residents, including his own family. 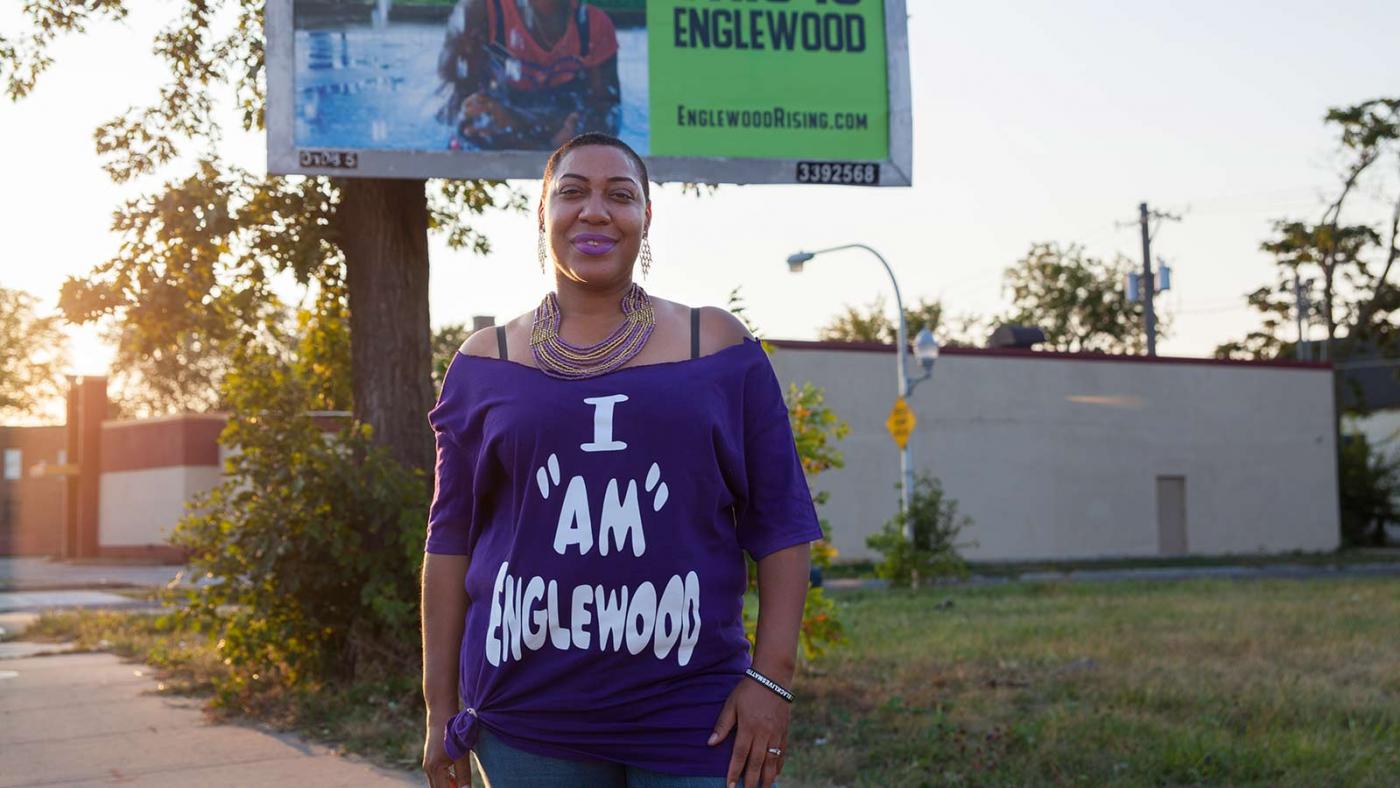 To many outsiders, Englewood is a symbol of Chicago gun violence and disinvestment. Lifelong resident Asiaha Butler, founder of R.A.G.E., has made it her mission to highlight and nurture the positive aspects of her community. In the process, she’s created a wealth of new opportunities and a blueprint for community-led development. 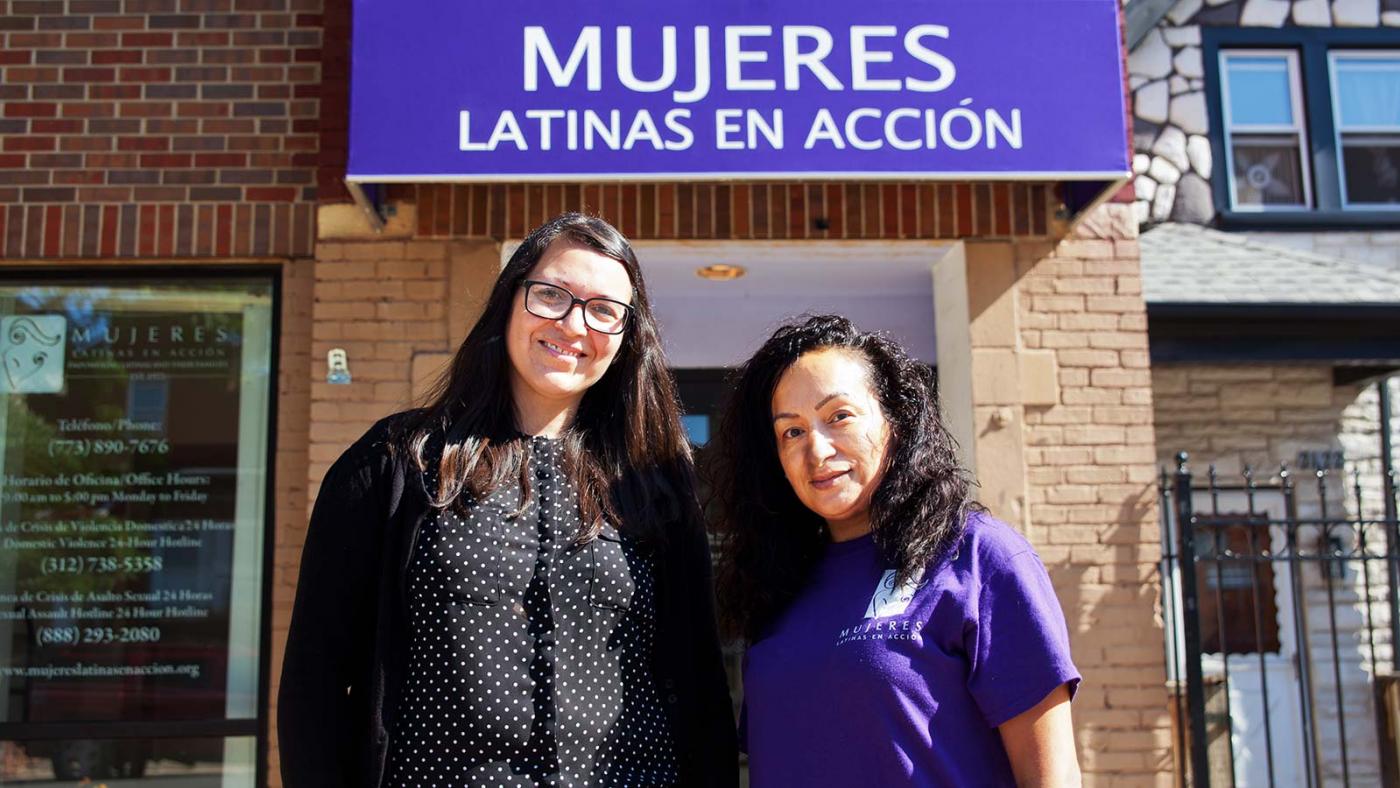 Many of the women who seek help from Chicago’s oldest domestic violence organization serving the Latino community have to overcome multiple barriers — including, in recent months, a growing fear of deportation.

Jeff Maldonado, a longtime Pilsen muralist, turned his personal tragedy into art and opportunity for others through the creation of the J-Def Peace Project. 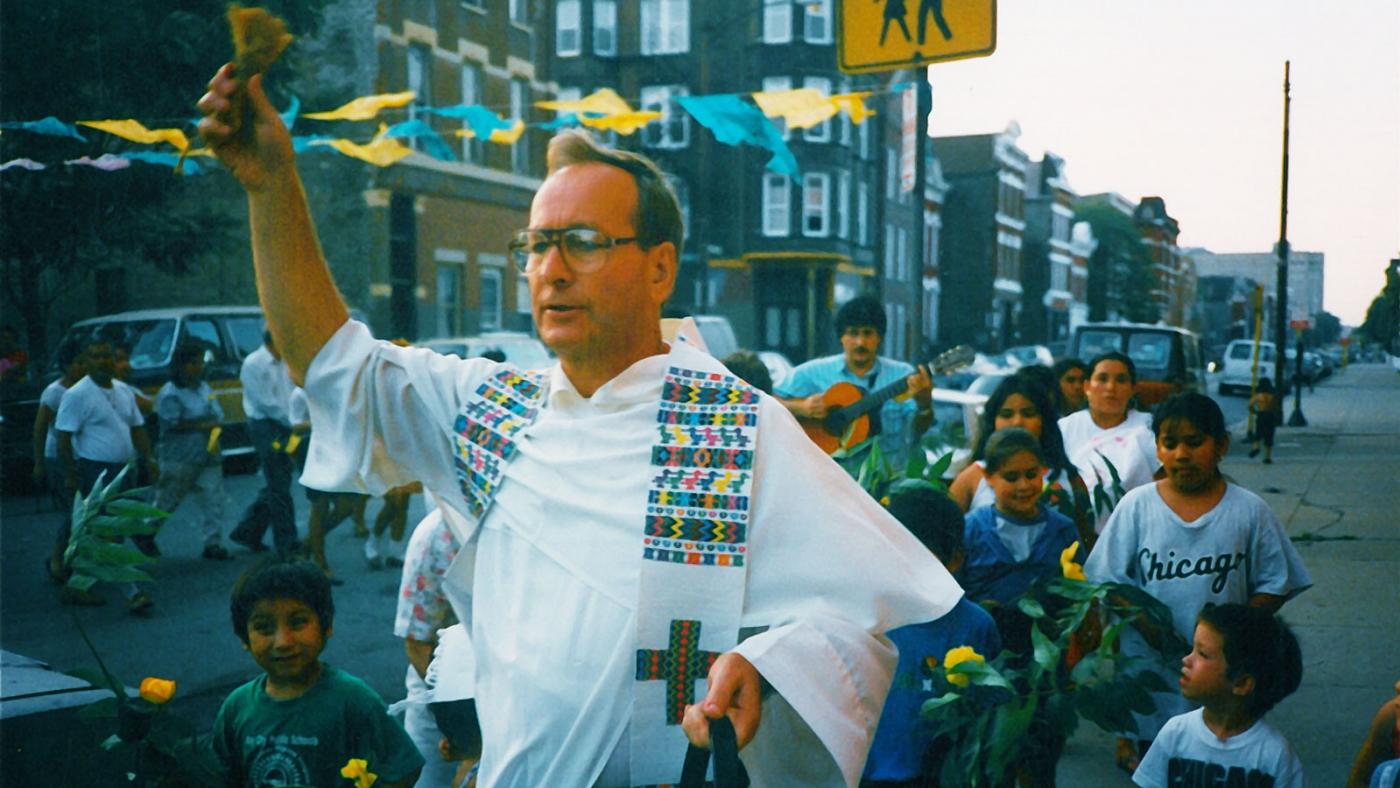 Pilsen residents have a long history of responding to violence with vigils, demonstrations, block parties, masses, and even basketball games, demonstrating opposition to the bloodshed and reclaiming corners that have succumbed to violence.