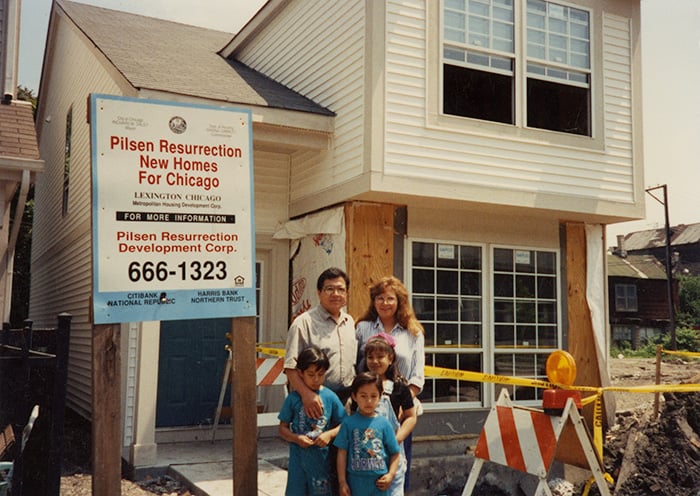 A family stands in front of their new home on Throop. Courtesy of The Resurrection Project

The long history of Pilsen and the people who have made it what it is today is written into its neo-Bohemian corniced buildings; its old industrial warehouses turned into upscale lofts; its exterior walls, painted with world-famous murals; and its sidewalks, made safe in the 1990s through concerted community organizing and now marked with brass discs of Aztec calendars.

The economic slump that much of Chicago suffered through in the 1960s and ’70s hit Pilsen hard, leaving hollowed-out shells of factories where industrial giants once stood. By the time it became Chicago’s first predominantly Mexican community in the mid-1970s, the neighborhood’s economy and infrastructure were at an all-time low. Most buildings had long since fallen into disrepair, with exposed wires, holes in the walls, and cracked or absent windows. In several buildings, multiple families living in different units had to share a single bathroom. 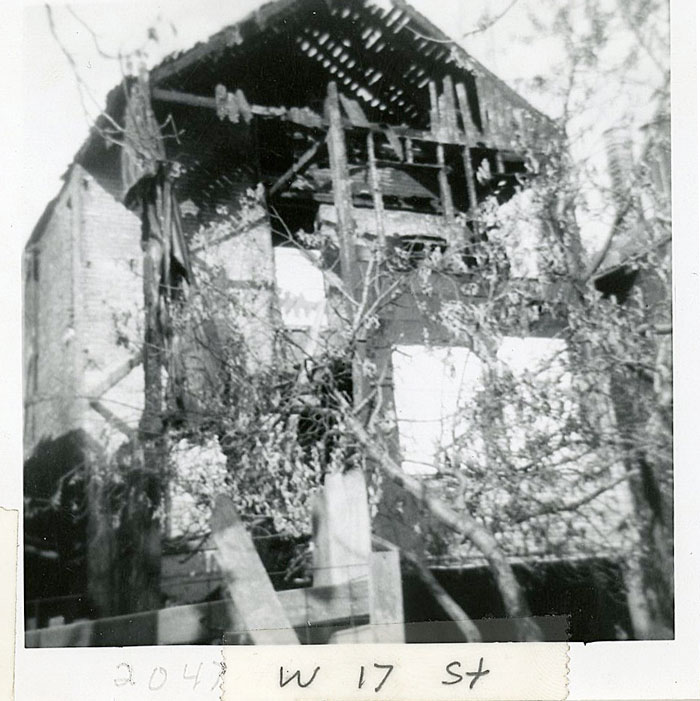 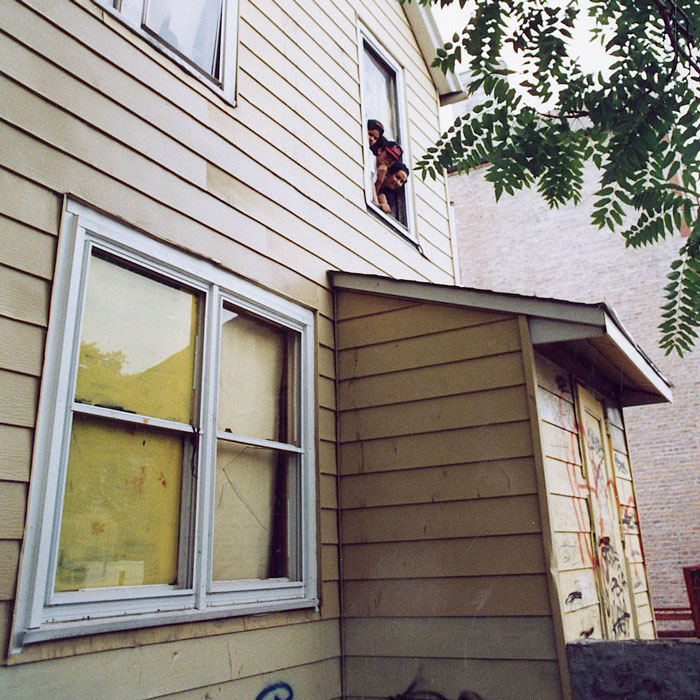 In the 1950s and 60s, Pilsen wasn’t a place that people came to if they had any alternatives. It was slated for multiple urban renewal plans driven by developers and downtown business interests. But the people who arrived and built a community network there wanted to keep it and be the driver of the neighborhood’s development. So they started organizing.

In the 1970s, Pilsen Neighbors Community Council (PNCC) began working with homeowners to improve their financial outlook and obtain loans for renovations. Much of Pilsen had been red-lined, and most Mexican-owned property was bought through predatory contract sales in which the seller keeps the deed and the buyer has no equity until the property is paid in full. PNCC worked with local banks to convert those agreements to conventional mortgages.

They also initiated the Rehab Project in the early ’70s, to both create the financing for homeowners who wanted to rehab dilapidated buildings and train community youth in building and construction skills. 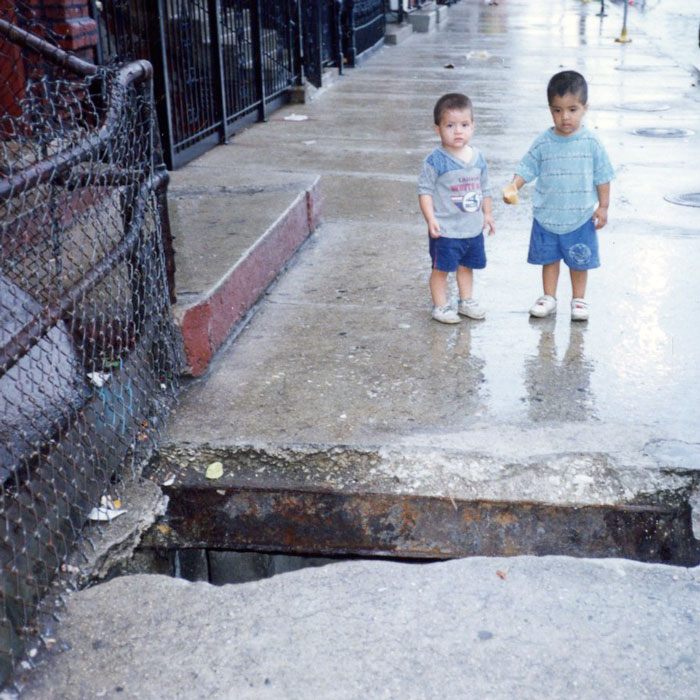 Two small children stand behind a hole in the vaulted sidewalks. Courtesy of Teresa Fraga and Special Collections and Archives at DePaul University Library, Chicago, IL

In the early 1990s, the PNCC also fought to fix the neighborhood’s vaulted sidewalks, which by then had developed dangerous craters and created eyesores throughout much of the neighborhood. In 1994, the PNCC’s massive campaign secured $5 million in city funding to renovate the sidewalks and make them safe.

Around the same time, the recently-formed The Resurrection Project kicked off a massive, coordinated grassroots effort to develop the neighborhood. They worked with hundreds of families to build wealth in the community, connecting residents with low-interest loans and building large-scale affordable units.

At the same time, John Podmajersky Jr. began slowly and quietly building an artists’ enclave. Raised in East Pilsen, he had spent years slowly and quietly buying up old factories along Halsted. In 2002, he formally launched what he dubbed the Chicago Arts District. It quickly became a destination for Chicago artists and art lovers, and development of the east end of Pilsen expanded rapidly.

All of this coincided with a national trend in urbanization and an economic revitalization in many parts of Chicago. As city living became more desirable, more and more people – most of them young, white professionals – migrated from the suburbs to Chicago.

The University of Illinois expanded, and developers once again discovered Pilsen, attracted by its proximity to the Loop, its rich neo-Bohemian baroque architecture, its colorful murals, and its abundance of cheap taquerias, live music, and street food.

They built the neighborhood up in a way that grassroots organizations couldn’t. Old rustbucket factories and industrial storage lockers were converted into upscale condo lofts. And property values have continued to climb.

“In a way, we put ourselves out of the market in Pilsen,” says Raul Hernandez, co-founder of The Resurrection Project. “We cannot compete. We cannot do it.”

Some people have celebrated the transitions. Many property owners have seized the moment, selling homes that have been in their families for years and making a strong return on their investment. Aggressive realtors, eager to capitalize on Pilsen’s rising popularity, have helped accelerate that trend, bombarding homeowners with regular letters, phone calls, and visits offering cash for their properties.

Alderman Danny Solis defends their decisions, and the changes in Pilsen.

“If you’re saying let’s keep Pilsen as Pilsen has been in the past… you’re kind of denying what I think is the dream of most working-class people,” he said. “They want to reach that American Dream. If they reach the American Dream, they are going to go into the middle class or upper class.”

But critics say that it isn’t upward mobility that is changing Pilsen, but displacement. Many long-time renters have left, unable to cope with rising costs.

Activists with the Pilsen Alliance work to slow that trend, closely monitor zoning requests and political contributions to Alderman Solis and mobilizing their supporters to oppose any new project that they feel might jeopardize the affordability and cultural identity of the neighborhood.

“Pilsen is beautiful right now, but the question is, how long can you keep that?” said Byron Sigcho, director of the Pilsen Alliance. “Are we going to be able to preserve affordability, preserve the neighborhood, and preserve what’s here? Today is that defining moment.”

Organizations like The Resurrection Project are also connecting residents with resources, offering foreclosure avoidance counseling and looking for ways to keep more properties in the hands of longtime residents.

They, and others, continue to fight to preserve the community cohesion and vibrancy that they worked so hard to build. 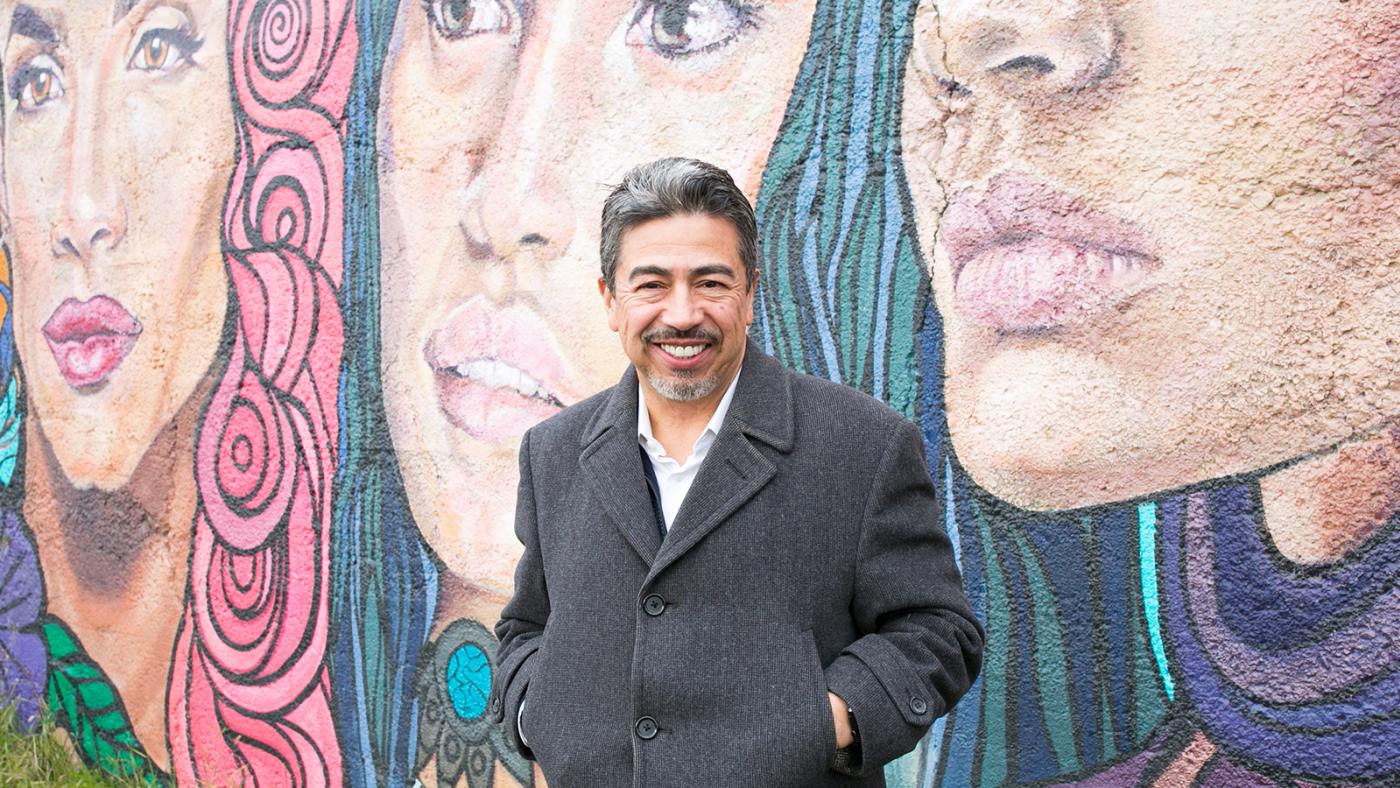 Over the course of his long career, 25th Ward Alderman Danny Solis has risen from ragtag community activist to one of the most powerful and senior aldermen in the Chicago City Council. During that time, he’s managed to expertly leverage power and city funds to help transform his ward. 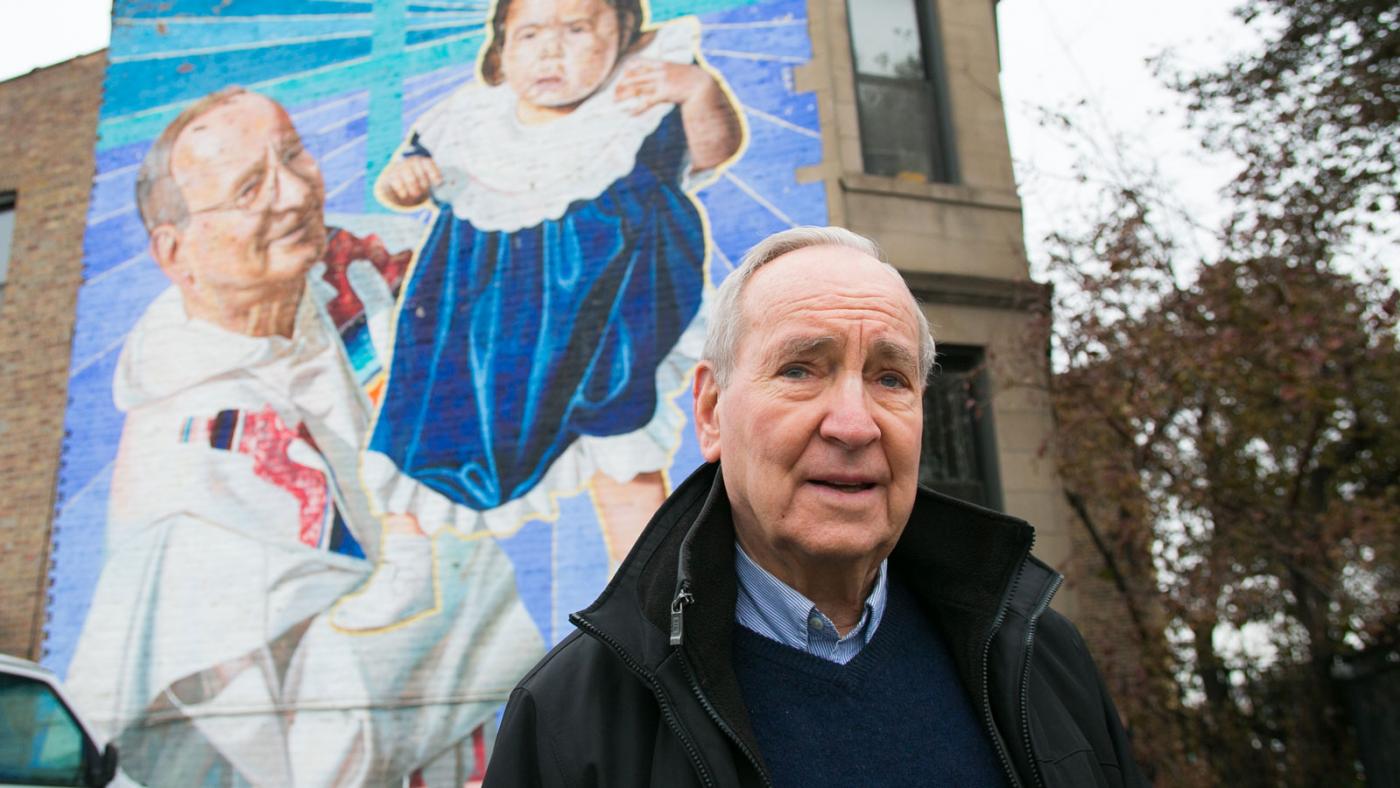 Father Charles Dahm is a dyed-in-the-wool activist, following in the footsteps of a long line of old-school, firebrand Catholic priests. He’s been pastor or associate pastor at St. Pius V in Pilsen since 1986 and says he has no intention of ever leaving. “I felt, and still feel, totally enriched just living in this neighborhood,” says Dahm.

Few people have played a larger role in Pilsen’s transformation during the past 27 years than Raul Raymundo, CEO of The Resurrection Project. He is now expanding his organization’s model to other neighborhoods, while he continues to struggle to preserve Pilsen’s identity and affordability. 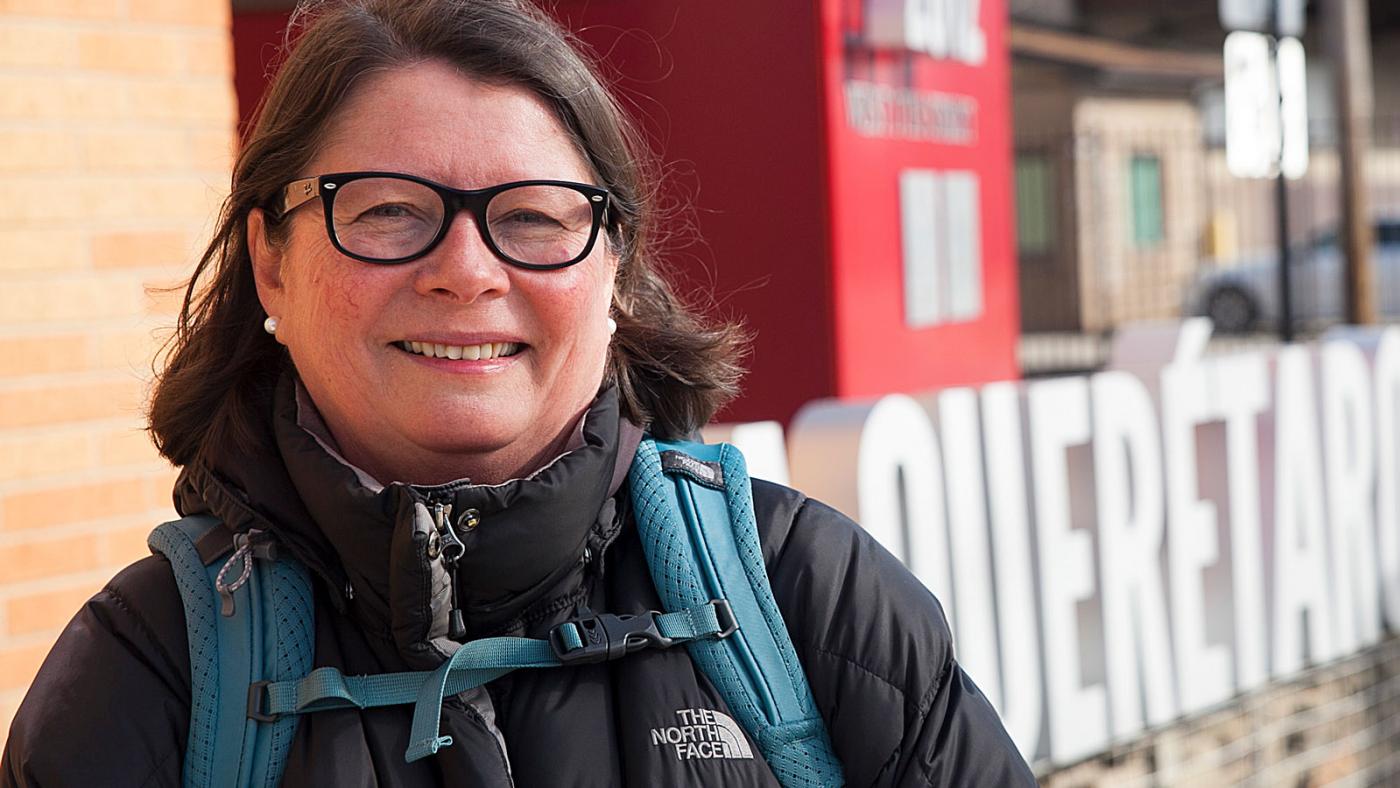 During the past twenty years, Guacolda Reyes went from intern to VP of The Resurrection Project. In the process, she’s helped develop more than 550 affordable housing units in the Pilsen neighborhood alone.

“When you build a house,” says Raul Hernandez, “you build a community.” With a coalition of church and community leaders, Hernandez co-founded an organization that has created of hundreds of affordable, dignified homes in Pilsen and, in the process, transformed the neighborhood. 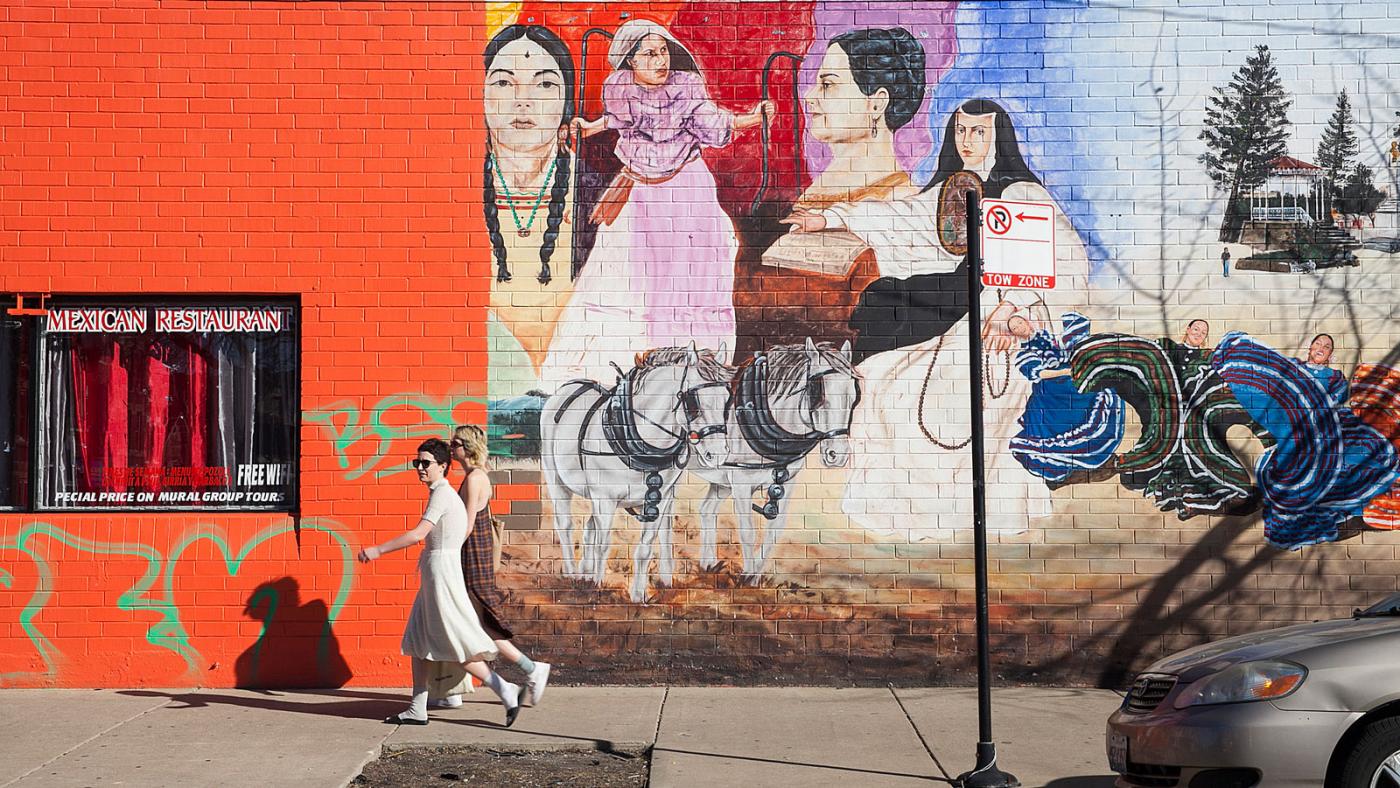 In recent decades, the demographics of Pilsen have changed: the Latino population has declined, and the community has become attractive to developers. But Pilsen residents are developing new tools with which to challenge their elected leaders, preserve affordability, and protect the neighborhood’s character.