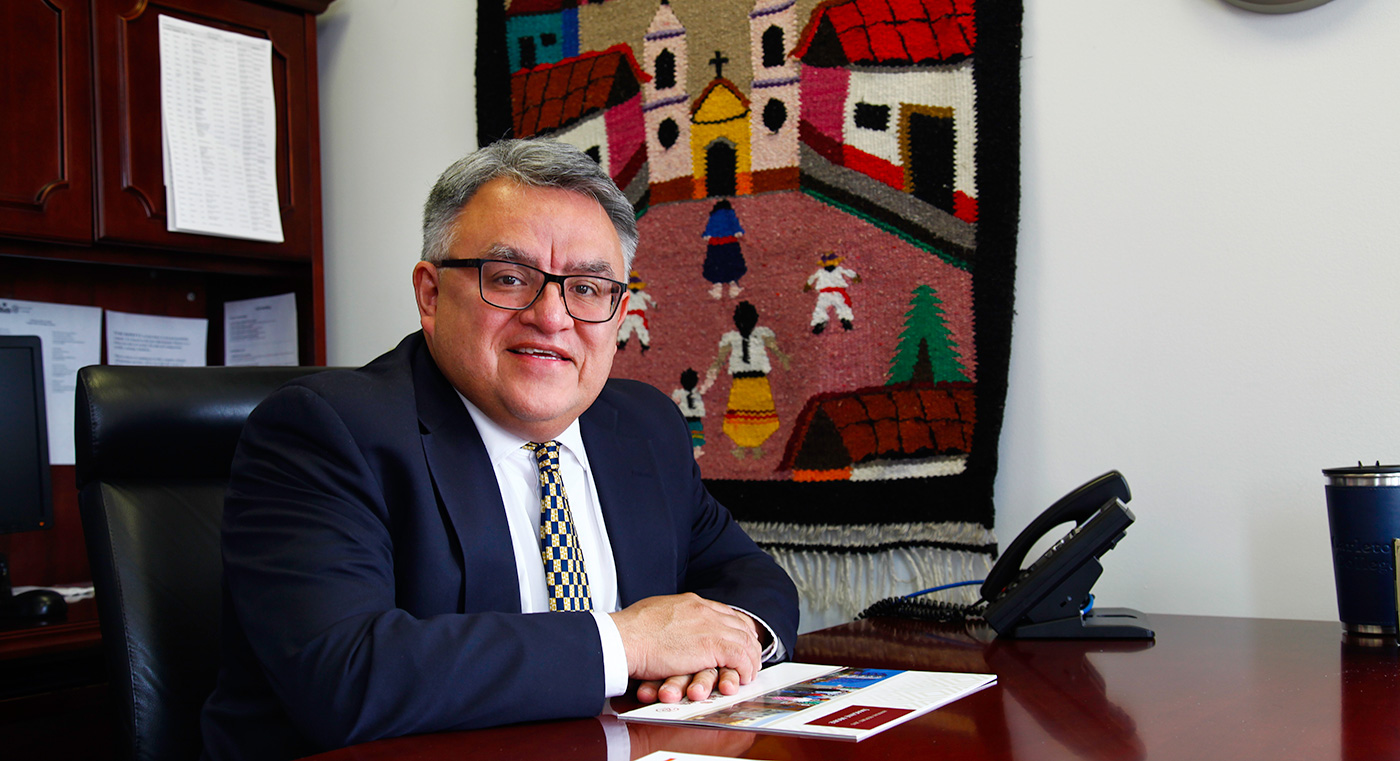 From his office, Raul Raymundo gazed down through his rectangular spectacles at the busy intersection of 18th Street and Ashland.

Raymundo has seen Pilsen transform dramatically in the 45 years he has lived there, from a neighborhood with high rates of gang violence, poverty, and disinvestment to a neighborhood with new restaurants and art galleries lining the streets. As the CEO of The Resurrection Project (TRP), a non-profit organization that aims to build wealth in the neighborhood through connecting residents with low-interest loans and building affordable housing units, Raymundo has played a significant role in Pilsen’s transformation.

“The challenges were many,” he said. “But every day I walk around and see proud homeowners from the ’90s still living here.”

Raymundo and TRP staff have become experts in leveraging public and private support through community organizing to create affordable housing and community development programs. During the past 27 years, they’ve turned $30,000 in seed money into $469 million in investments in Pilsen and the surrounding, predominantly Latino neighborhoods.

Raymundo came to Pilsen from Mexico with his five siblings and parents in 1972 when he was seven years old. At the time, he remembers hearing Slavic languages spoken in the streets. The area was transitioning from a predominantly Eastern European neighborhood to a port of entry for Mexican families, many of them migrating to Chicago to find work.

At first, adjusting to a new place wasn’t easy for Raymundo. As a native Spanish speaker, attending school in English was difficult for him. He lived in a two-bedroom apartment with his parents and five siblings. He remembers staying up until the early morning hours to complete his homework, since it was the only time that he could find quiet in his crowded home.

After graduating from Benito Juarez High School, Raymundo received a scholarship to attend Carleton College, a liberal arts school in Minnesota. He was one of the only students in his class to go out of state for college. After he graduated, he returned to Chicago to enroll in the master’s program in public policy at the University of Chicago.

Growing up, Raymundo attended St. Pius V parish in Pilsen every Sunday with his family. But young Raymundo viewed the church as rigid until one day in 1988, when at the age of 23 he decided to revisit his childhood church. He sat on a familiar bench, expecting to hear a familiar sermon about the importance of prayer.

Instead, Father Charles Dahm spoke about a young man who had been shot across the street from the church.

At the time, multiple gangs patrolled the neighborhood. Abandoned lots and dilapidated buildings were common. The high school dropout rate was high.

Father Dahm asked the congregation, “Are we just going to pray that the problem goes away? Or are we going to do something about it?”

The sermon that morning stirred Raymundo to action – and to embrace Catholicism.

“I finally got to see what, as an adult, a Catholic is. I realized that Catholicism was very broad and very rich,” said Raymundo.

He joined the Catholic Community of Pilsen, a community group that had recently begun meeting in the church, identifying social problems and organizing neighbors to collectively demand change.

“Maybe we were [from] different generations, but we had something in common,” said Raul Raymundo.

Raul Hernandez says the two used to call each other tocayo, which in Spanish means you share the same name.

“The first time I saw him, he was just a young boy,” said Hernandez. But Hernandez said everyone took Raymundo seriously.

“It was amazing that we had the same dreams, the same vision,” said Hernandez.

In 1990, six local priests, including Father Dahm, each pledged $5,000 in seed money and sent one representative to formally turn the Catholic Community of Pilsen into a new grassroots community organizing and development organization, which would soon become The Resurrection Project. Raymundo and Hernandez were joined by Rosa Dominguez, Vernon D’Souza, Cecilia Paz, and Esperanza Godinez. 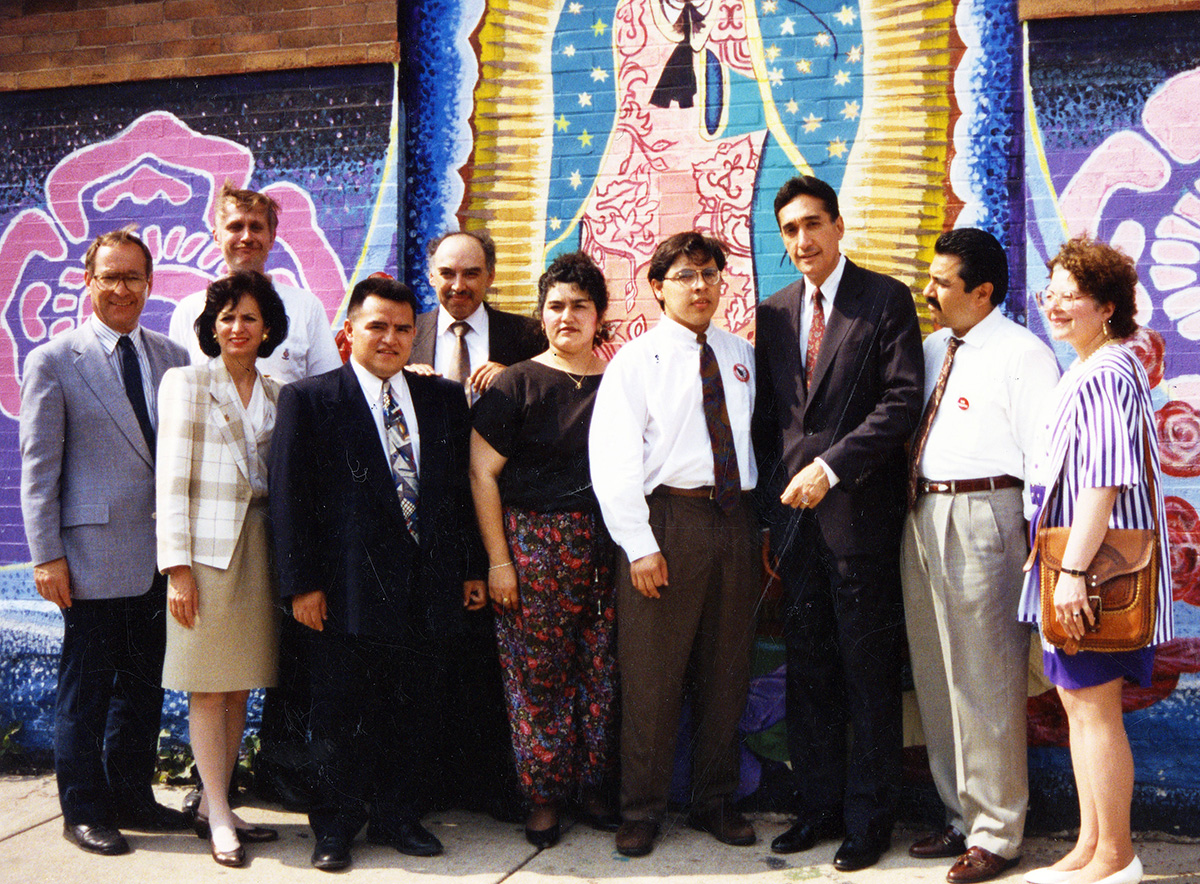 Raymundo has been the CEO since day one.

For Raymundo, the question was, “How do we put our faith and values into building a healthier community? How do we build on the assets of the community?”

The organization focused on transforming abandoned lots into affordable housing and educating people how to build their credit, buy homes, and start businesses in the neighborhood.

"Traditional models say organizing and development don’t co-exist. Our naiveté was like, 'Why not?'"

“Traditional models say organizing and development don’t co-exist. Our naiveté was like, ‘Why not?’”

In the early 1990s, TRP pressured then-Mayor Richard M. Daley to donate abandoned lots to the organization so they could build affordable homes. Once they successfully pressured the mayor to donate the lots, Raymundo said the challenge was to generate the resources to build new homes.

“We had to build the apparatus of the development part of it,” said Raymundo.

During the past 27 years, their efforts have grown into a multi-pronged organization that today provides affordable housing to more than 844 families, offers loans to new business owners, and helps immigrants apply for Deferred Action for Childhood Arrivals (DACA). They also recently expanded their programs to Back of the Yards, Little Village, and the suburb of Melrose Park.

“For somebody to grow up from being a 20-year-old to this position that he has now, I think it is just incredible,” said Hernandez, who today, along with Father Dahm, is a board member of TRP.

“His vision is so great, so big, and how he pushes himself to accomplish his vision is incredible.” He added, “You can say he changed the face of Pilsen.”

But Raymundo says that it has been a collective effort.

“It’s not about me. It’s not about the organization. It is about what is happening around us collectively that we need to improve,” Raymundo said.

Part of that work today is to make sure that any new development is an investment in the community and that longtime residents can continue to afford to live in Pilsen.

While the median household income in Pilsen has increased in recent decades, the neighborhood’s Latino population has declined by 26 percent between 2000 and 2010.

Although Raymundo says he prefers to live and raise his children in the Pilsen of today, he is concerned that many longtime residents can’t afford to stay.

“The violence is down, but the property value is up,” he said. “Our job is to continue to figure out ways to build affordable housing.”

The Resurrection Project has worked with 25th Ward Alderman Danny Solis to pressure developers to set aside 21 percent of their units for affordable housing in the neighborhood. “That will help with those developers that want to build development that push people out of the market,” said Raymundo.

For this organizer and entrepreneur, there is “no shortage of things to do.”

One of TRP’s more recent projects has been the creation of the country’s first neighborhood-based, affordable housing center for commuter college students, called La Casa. The idea came after Raymundo struck up a conversation with a young college student. Raymundo asked him when and where he generally studied. The student, who lived in a two-bedroom apartment with eight members of his family on 18th Street in Pilsen replied, “At two o’clock in the morning in the bathroom.”

“I could relate to that,” said Raymundo. He realized that little progress had been made since his youth to help young men and women from low-income families, living in cramped quarters, find somewhere to do their schoolwork.

Raymundo said he wanted to “create an environment in the community where we can provide them the support and opportunity to go to local universities and succeed.”

La Casa, the six-story dormitory at 1818 South Paulina in Pilsen, opened in 2012. Today, it provides that quiet place, as well as mentoring opportunities, to commuter college students from Pilsen and low-income neighborhoods throughout Chicago.

“I live by a simple credo, in terms of my faith,” he said. “How do you build [God’s] kingdom on earth?” He continued, “What can you do here and now? Be realistic about it. That is how I approach my work.”