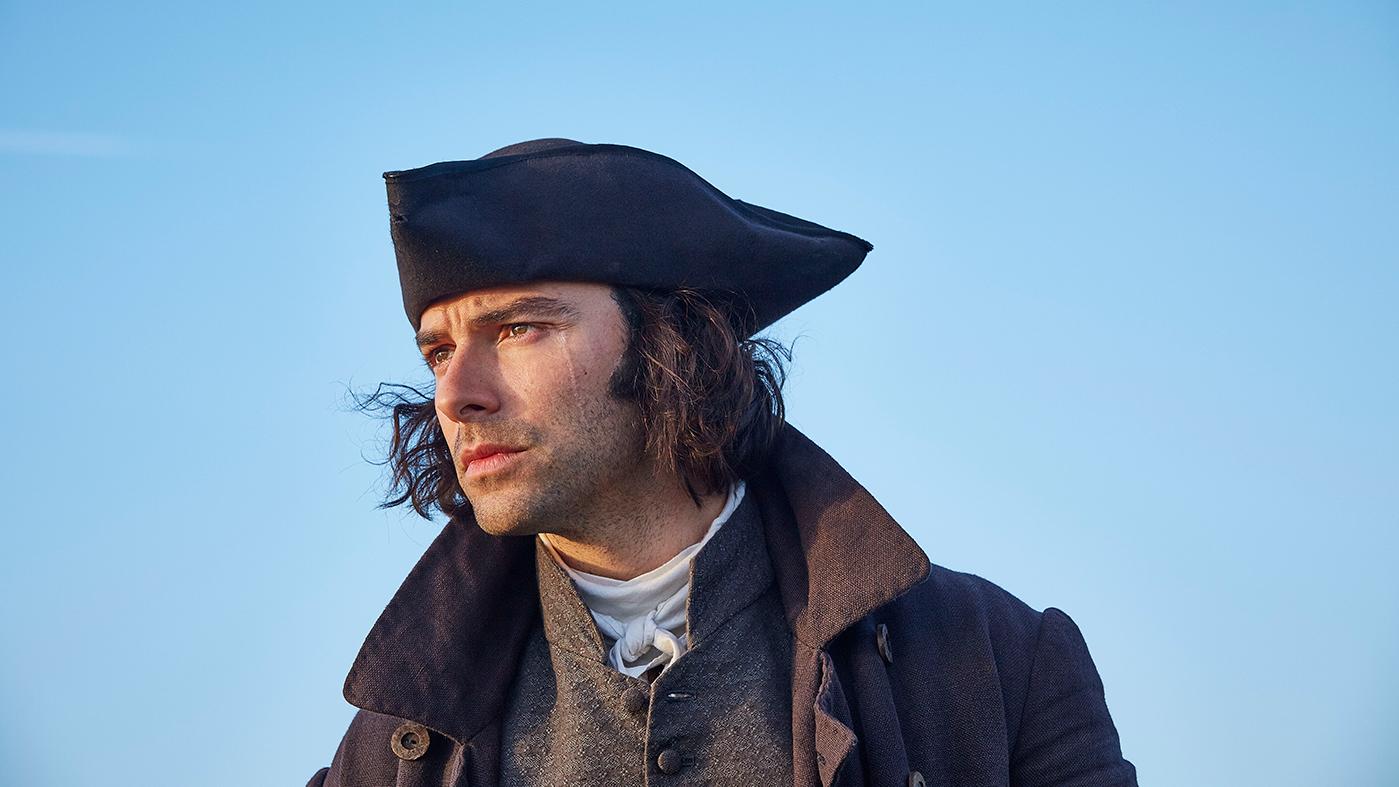 Poldark is available to stream for a short time. Read our recaps of the previous episode, the following season's premiere, and other seasons.

We open in October 1780 – a festive party at Trenwith is in full swing. Aunt Agatha (still alive and kicking) is celebrating her birthday, Francis hasn’t yet drowned, Verity hasn’t yet married, and a ponytailed George and Cary seem a bit overwhelmed to be there. A youthful Ross, sans his yet-to-be facial scar, is about to enlist as one of Those Redcoats in our Revolutionary War. Agatha and Verity try in vain to dissuade him, but Ross assures them that he’ll be back in no time. Elizabeth, her two marriages in the future, has eyes only for Ross, and they dance as Francis and George watch enviously; she is clearly out of their league. And now, back to October 1799…

…where Demelza, in Cornwall, and Ross, in London, are each waking up alone and troubled.

Elizabeth, desperate to patch things up with George and safeguard Valentine’s inheritance, consults a backstreet London doctor to arrange for the fetus she is carrying to arrive two months early. The doctor hands over a potion of “herbs and a fungus that grows on rye” that will immediately bring on labor. If there are any complications, he cautions, she must come clean to her own physician.

Caroline convinces Ross to return to Cornwall with her. In the coach, she watches as Ross somberly replays the duel in his mind, only this time his opponent is not Adderley, but a steely-eyed Armitage. Caroline assures him that Demelza “would never spare a thought for a worthless rake like Adderley.”

Another coach is enroute from London; it’s George, a very pregnant Elizabeth, and Valentine. George is still convinced that Valentine isn’t his son, and pointedly ignores him. He will stay in Truro, he tells Elizabeth icily; he doesn’t care where she goes.

In the old cave shrine, Drake encounters Morwenna, who sees him and flees. Drake goes after her, delivering a heartfelt speech: “carnal love” is not that important; she can be his wife “in name only.” Reluctantly, she goes to him. Later, Demelza and Sam arrive at Drake’s cottage, surprised to find Morwenna there. Drake is over the moon: Morwenna has agreed to marry him! Demelza and Sam are thrilled for Drake, who wants the wedding to happen fast or his skittish bride-to-be will bolt. Drake and Demelza ride off to Bodmin to apply for an expedited license.

Hearing the news, Elizabeth seeks out Morwenna at Drake’s home. Morwenna is still wary, and Elizabeth attempts to apologize for all things Ossie. She suggests Morwenna be married at Trenwith, but Morwenna rightly wants George nowhere near it. Elizabeth assures her that he won’t be around anytime soon. She might be wrong: cut to George at the bank as he receives a letter from Prime Minister Pitt. It seems important, and he departs quickly. 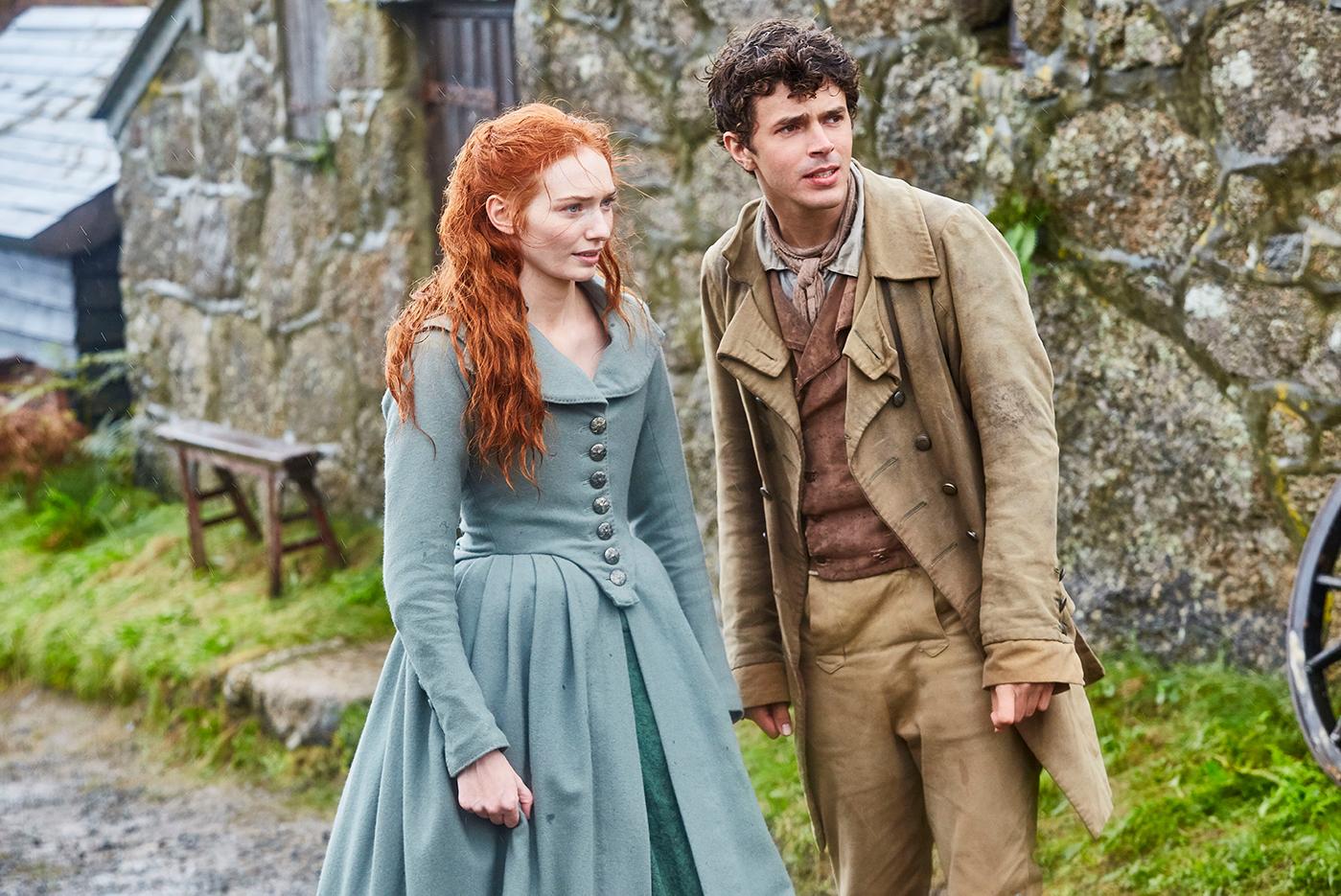 Drake's life may finally be looking up, if George doesn't ruin it first. Photo: Mammoth Screen for BBC and MASTERPIECE

Morwenna, taking in Elizabeth’s pregnancy, reluctantly agrees to walk her back to Trenwith where Elizabeth then persuades her to stay for dinner. Meanwhile, Demelza and Drake, returning with the license, are alarmed to learn of her whereabouts from Sam. In the midst of an argument about who will go after her, Ross suddenly appears. He will go – “this is one marriage that [George] will not be allowed to interfere with.”

In the midst of dinner, George unexpectedly arrives at Trenwith and, learning that Morwenna is to marry Drake, throws her out of the house, ordering his servant Harry to “see her out.” Elizabeth, mortified, glares at George and storms out.

Drake decides to go after Morwenna despite Ross’s warning. Meanwhile, Ross, at Trenwith, politely inquires about her. George rages at him, they have words, but Elizabeth directs Ross to the woods…

…where Morwenna is making her way back to the village alone in the dark. Harry and other servants, as always taking George’s directives too literally, pursue her with snarling bloodhounds. Suddenly, Drake appears between them and Morwenna, brandishing a big stick, and drives them off. She will be safe now, Drake tells her soothingly. Her resolve crumbles, and she clings to him, sobbing.

Back at Trenwith, George tries to make amends with Elizabeth, but bitterly admits he still doubts Valentine’s parentage. Left to her own devices, Elizabeth resolutely swallows a big spoonful of the shady doctor’s serum. Later, George finds her out cold on the floor and summons Dwight, who quickly delivers her of a premature but healthy baby girl. Elizabeth’s ruse has worked: after two premature births, George is now convinced that Elizabeth has been truthful about Valentine. They name the infant Ursula, or “little she-bear.” George gleefully informs Elizabeth that he is being knighted, and things have never been better between them.

Ross, reunited with Demelza, admits that the duel with Adderley was “not well done.” Demelza concedes that she shouldn’t have come home without him, and they call a truce. Dwight and Caroline, likewise back together, hope they have come to a workable “London/Cornwall” compromise.

The next morning, Elizabeth wakes in excruciating pain. Dwight arrives in haste at Trenwith to find Dr. Choake cowering and George frantic. To his horror, he discovers that Elizabeth’s fingers and toes are swollen and dark purple – her circulation has been cut off. The cause is a mystery, but her condition is tragically obvious to both doctors: gangrene. Later, George sits by Elizabeth’s bedside, holding her purple hand. As her vision fades and she tells a devastated George that she’s “afraid of the dark,” Dwight finds the vial, sniffs at the contents, and realizes what Elizabeth has done. 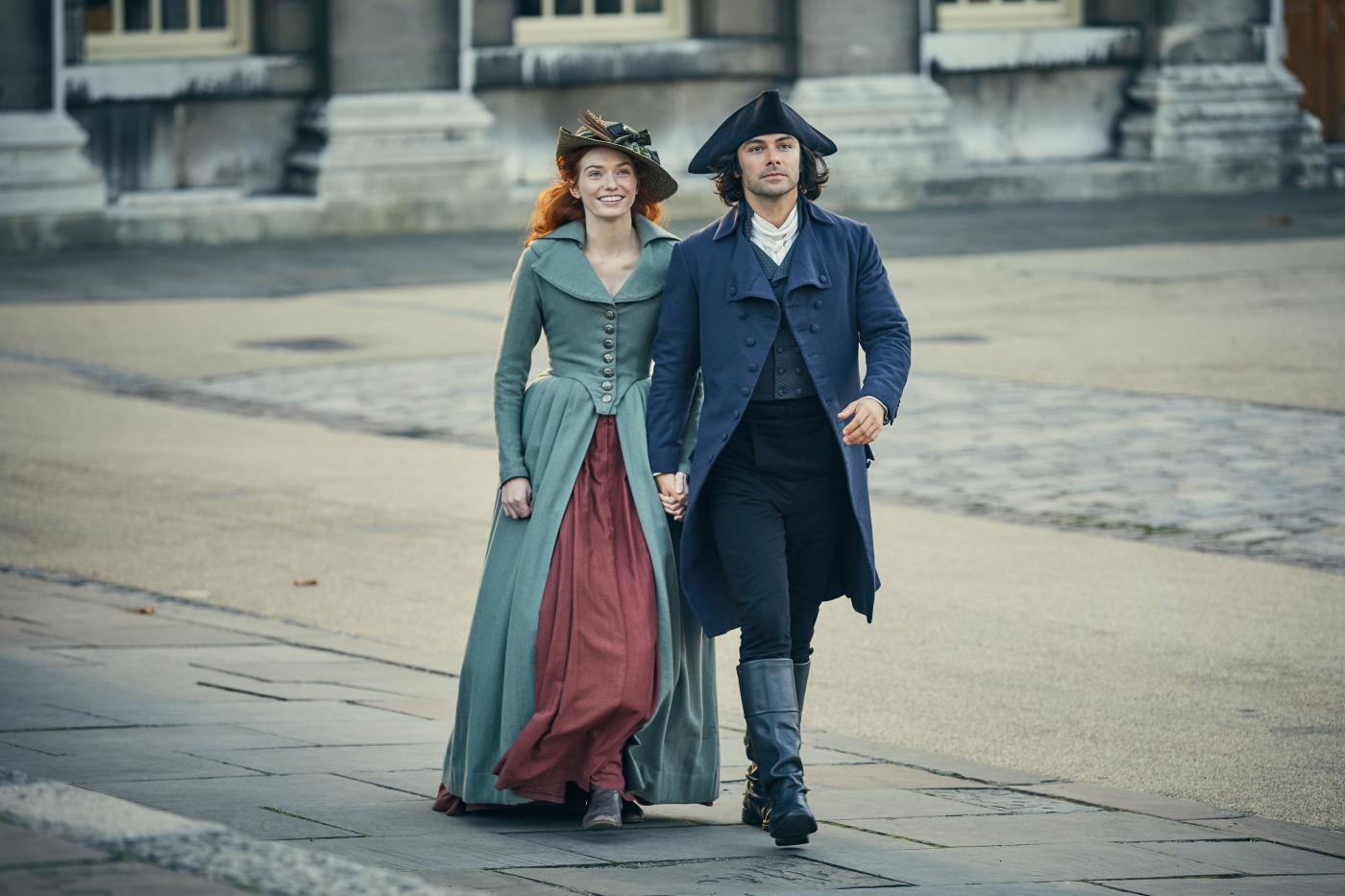 Though they have been through trying times, Ross and Demelza may finally have come to an understanding. Photo: Mammoth Screen for BBC and MASTERPIECE

Cut to Caroline at Nampara, filling in Ross and Demelza about Elizabeth’s illness. Generously, Demelza suggests that it would be “neighborly” for Ross “to inquire.” Ross arrives at the dark and silent house to find George coming unglued in the foyer. “Elizabeth is dead,” he cries viciously. “See what we’ve brought her to!” Dazed, Ross makes his way up to Elizabeth’s room, kisses her cold lips, and leaves in tears. George still has baby Ursula and they, with Valentine, keep watch over Elizabeth’s body.

Demelza finds Ross at dawn on the cliff’s edge, and he somberly shares the news. “What can I do?” she asks. “Walk with me,” replies Ross.

At Killewarren, Dwight is ruefully contemplating Elizabeth’s empty vial…she was doomed by George’s jealousy and her own indecision. Caroline confesses that she returned to Cornwall for “a different life…a meaningful life…to give life again.” Is she pregnant, or just preparing to be? We don’t know, but we sense they are ready to move forward.

Ross and Demelza likewise talk it out – he finally understands how she felt after losing Armitage, and he’s now terrified of losing her. Demelza assures him that it won’t happen – Armitage “did touch her heart,” but only Ross “has ever owned it.” Cut to…

Wedding bells and flower petals raining down on the newly married Drake and Morwenna leaving the church, followed by Ross, Demelza and the happy congregants. Geoffrey Charles and Verity spot George and Valentine brooding at Elizabeth’s grave, as do Ross and Demelza. Ross starts toward them, but Demelza stops him. “Nay, Ross,” she says. “There’ll be time for such a thing.”

Ross, for once, takes his wife’s advice and they join up with Prudie, their children, and the other well-wishers. Cut to a close-up of the widower George’s steely expression…how will he avenge this loss?

We’ll find out next season.