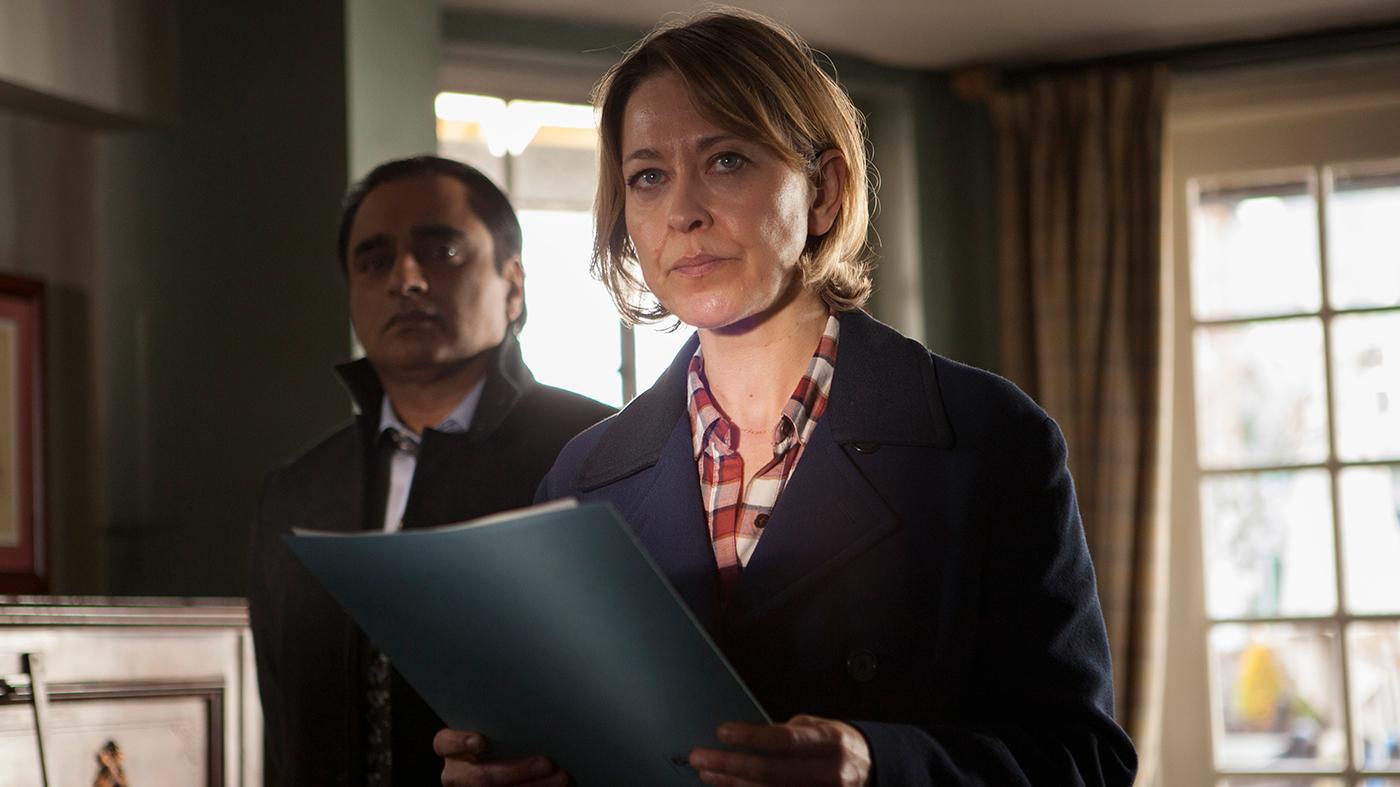 Cassie and Sunny travel to Middenham to speak with Hayley's family. Photo: Mainstreet Pictures for ITV and MASTERPIECE

As Cassie and Sunny drive to the town of Middenham to interview Hayley Reid’s family, they receive new information from the coroner: Hayley may have been strangled. Breaking this news to the Reids devastates Hayley’s mother. Jessica, Hayley’s identical twin sister, visits Cassie later and tells her that Hayley’s disappearance eighteen years ago and its aftermath effected a fundamental change on all of the Reids, her parents especially. She hands over Hayley’s diaries for evidence, and warns Cassie that Middenham will not be happy that Hayley’s case has been dredged up again. When she first disappeared, the media attention devastated the town’s thriving tourist business, and it took almost a decade to recover. People may not be the most cooperative.

Even before the skeleton is confirmed by DNA matching to be Hayley’s, the media descends upon Middenham. As Cassie and Sunny go over the initial investigation into Hayley’s disappearance with a retired detective who worked on it, the press clamors for a statement from the police and runs tabloid stories on Adrian Mullery, Hayley’s boyfriend at the time of her disappearance, who now works at a girl’s school.

The retired detective admits to Cassie and Sunny that he’s ashamed of how the case was handled. It was initially treated as a runaway, and by the time it was investigated as a kidnapping or murder some leads may have gone cold. Suspicion fell on Mullery, who was 23 to Hayley’s 16, and later on Hayley’s father, as her mother was out working that night and her father was home alone, but there was no evidence and the detective didn’t believe either would have killed Hayley. Because it was the New Year’s Eve at the turn of the millennium, most people were in public places and thus had strong alibis.

When Cassie finally gives a brief statement to the press, a woman comes forward and asks to speak to her. She was a friend of Hayley’s and has information that she never revealed. Two days before Hayley disappeared, Hayley took on a cleaning job in a holiday rental for her friend so that she could meet a boy. She never told the police because she didn’t want her parents to find out, and she didn’t think the information was that important.

Cassie disagrees. She has already had a hunch that whoever killed Hayley wasn’t from Middenham but rather a tourist from London who had gotten a rental for the holiday; why else would they bury Hayley so far from Middenham and so close to London? She sets her team to finding out who rented the cabin Hayley cleaned all those years ago.

Turns out it was James (Jamie) Hollis, the TV quiz show host and journalist who is very popular with ladies of a certain age. He and three other people rented the cabin: Pete Carr, the failing salesman; Chris Lowe, the nervous artist; and Tim Finch, the respected small-town doctor. When Cassie and Sunny visit Jamie’s home to ask some questions, he says he’s happy to answer but will need to have his lawyer present. As the detectives leave, he calls his son Eliot and leaves a message: “It’s happened. They’ve come. The police. About her.”

Jamie has a difficult relationship with Eliot. He has recently learned that Eliot is experimenting with his gender identity and wants to try to understand, but Eliot seems to find spending time with Jamie painful, and alludes to a difficult past. Eliot gets along better with Jamie’s ex-wife Mel; the marriage broke up seventeen years ago (just a year after Hayley’s disappearance), and the divorce is acrimonious. Mel blames Jamie’s strained relationship with Eliot on the eight years Jamie spent living on another continent.

Pete Carr also spent time abroad. While arguing over money – which is in short supply – with his wife, she alludes to time that he spent in Hong Kong. Desperate for cash, he went against company protocol and prematurely cashed a check from a sale to an old man. When the man’s daughter calls to cancel the sale, Pete’s assistant can’t find the paperwork. Trouble brews.

Tim Finch also faces trouble at work, but his seems to be passing. Accused by a patient’s daughter of verbally abusing and threatening her mother during a home medical visit, he faces a medical ethics board. But the woman accusing him has a history of making allegations and complaints against doctors and trying to get financial settlements from them.

The charges do seem unlikely against Tim, who appears to be kind and generous. He is certainly sincere and delicate in his care of Chris Lowe, the artist, during a crisis. Chris’s camper van, where he lives, has been broken into: the large sum of money he was keeping for a deposit on a home was stolen, and his beloved dog Frankie is missing. He calls Tim for help.

Tim drives to Bristol as soon as possible to help Chris get his van’s shattered window repaired and print posters asking for news of Frankie. He also offers Chris money if he needs it, although Chris still has a good amount of money at his gallery, and suggests opening a bank account – but Chris is vehemently against the idea. Chris apologizes to Tim for requesting help with such simple tasks; he should be able to do them on his own. Tim demurs, saying that “we’re all proud of you,” and he’s happy to help. There’s clearly some history there.

Before this crisis, Chris had proposed to Jamila and asked her to move in with him (hence the money for a flat); now, he ignores her calls. She finally comes to his van to speak with him, and he apologizes for proposing: he was naïve to think he could help take care of her and her son; he can’t even take care of himself. She responds that she wishes she hadn’t hesitated when he asked her to marry him. In fact, she loves him, and wants to look after him. As she leans in to kiss him, a dog barks. Frankie has returned.