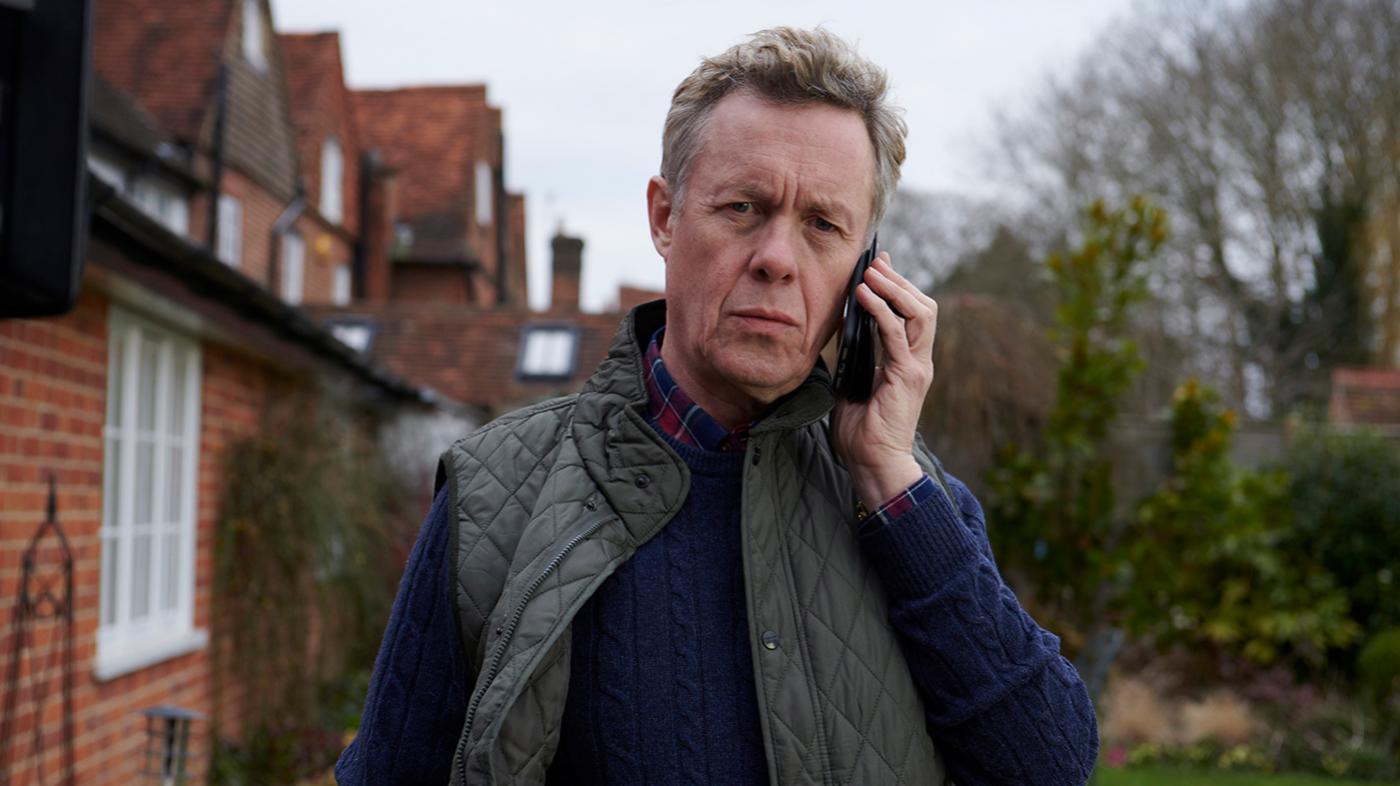 The four schoolmates all make sure they remember New Year's Eve 1999 the same way before speaking to the detectives. Photo: Mainstreet Pictures for ITV and MASTERPIECE

Cassie is afraid her dad has dementia. He keeps forgetting things but refusing to believe that he has: leaving the stove on, forgetting a plumber appointment, even an upcoming trip to Venice with his girlfriend – though he plays off that lapse as a joke.

Reopening the investigation into Hayley Reid’s disappearance is testing people’s memories. Cassie and Sunny begin interviewing the four men who rented a cabin that Hayley cleaned, starting with TV show host Jamie Hollis, under the supervision of his lawyer. He says that he and his three friends went to Middenham to play golf, then were joined by their families on New Year’s Eve. Pete Carr was single at the time, but everyone else had a wife and at least one kid. Jamie doesn’t recall seeing Hayley. The group spent their New Year’s Eve eating at the cabin, then the kids went to bed, and no one left the house after around ten o’clock.

One coincidence: Jamie and his friends grew up and went to school together – right near where Hayley’s skeleton was found.

The retired detective who worked on the first investigation into Hayley’s disappearance gives all the detectives a briefing on the case. A church was broken into and expensive silver was taken that New Year’s; one theory held that Hayley saw something and was taken by the burglar. The weather was bad that night. And there was a black car driving erratically near where Hayley was last seen.

Before Cassie and Sunny can interview the other three schoolmates, Jamie calls his friends to warn them and confirm – some might say emphasize – that they remember the night the same way. Tim has just been exonerated in the complaint against him that he verbally abused and threatened a patient. Pete takes the opportunity to ask Jamie for a favor: he needs money. Desperate for cash, he had cashed a check from a sale directly into his personal account. The cancellation of the sale turned his boss onto the deception; when he returns home one day, he finds his boss chatting with his wife. Luckily, Pete has the money from Jamie. He hands it over, saying it was a mistake. His boss insults him and leaves, then his wife tells him their marriage isn’t working anymore.

Failed marriages are a theme amongst the four schoolmates. In the wake of Jamila confessing that Chris’s love is not unrequited, he and she are looking at flats to rent together with her young son. Before Jamila moves forward in the relationship, however, she wants to know about more about Chris: how did he end up living in a camper van?

He narrates his past for her. He was married for twelve years and has a daughter. The marriage ended when he lost his job because of issues stemming from his undiagnosed bipolar disorder (he’s medicated now). His wife didn’t want their daughter to be around Chris while he dealt with his “issues,” so he hasn’t seen his daughter since the marriage broke up in 2000. When his ex-wife died in 2012, his daughter wrote and told him not to come to the funeral. By then he was homeless, having run up debts.

After Cassie interviews Chris about Hayley – he is nervous and gets worked up when Cassie begins to ask personal questions, including about his marriage – she fills in more details of his life by looking into his past. He was the CEO of an ad agency and was considered a genius. His wife drove a Maserati; they had a huge house. Then came the breakdown of his marriage.

The divorce came around the same time as Jamie’s and Tim’s, all within a year of when Hayley disappeared. Tim corroborates Jamie’s story about New Year’s Eve when Cassie and Sunny come to talk to him, and he warns that his wife may not be very helpful if they speak to her: she suffers from depression and anxiety.

Pete is the only schoolmate who wasn’t married at the time of Hayley’s disappearance. He’s also the only one who recalls seeing Hayley cleaning their flat, while he was alone there – he was living in Hong Kong, and had stayed at the cabin to recover from jet lag. But he didn’t know about her disappearance, since he went back to Hong Kong and thus missed the media coverage.

Cassie and Sunny begin to think the four schoolmates were a waste of time: if their stories are true, none of them could be a suspect, because they didn’t leave the rental house after ten o’clock and the last sighting of Hayley was a bit after midnight.

The detectives also don’t have any luck with Adrian Mullery, Hayley’s boyfriend at the time of her disappearance. He refuses to talk to them voluntarily – he despises police, who ruined his life once and failed to solve Hayley’s case. He has already been asked to take paid leave from his job at a girl’s school because of the renewed media spotlight on him. So he won’t willingly subject himself to more scrutiny.

Fortunately for the detectives, one more source does end up being helpful. Jamie’s ex-wife Mel is willing to talk, and shares a different story of that long-ago New Year’s Eve. After the kids went to bed that night, sometime after nine, Chris went off the rails and began ranting about the emptiness of his life, then suddenly walked out of the house alone. Jamie and Tim eventually followed. Chris came back on his own an hour and a half or so later, drenched in rain and splashed with mud. Jamie and Tim returned soon after that, as did Pete, who had been at the pub trying to pick up girls the whole time. Pete was pissed, everyone was a bit drunk, and Jamie may have done coke. Mel is certain no one left after midnight, however, as she and the other wives stayed up discussing their failing marriages, and then she stayed on the couch and never fell asleep.

This still means the men have an alibi in Hayley’s disappearance, given that she was seen a bit after midnight. Except – the person who last saw her, her manager at a restaurant, mistook her for another girl. He says she was wearing a Madonna costume for a party; her diary says she hated the ‘80s and was going to go dressed simply as herself. And there was another girl working at the restaurant with a similar appearance to Hayley; she confirms she dressed as Madonna that night.