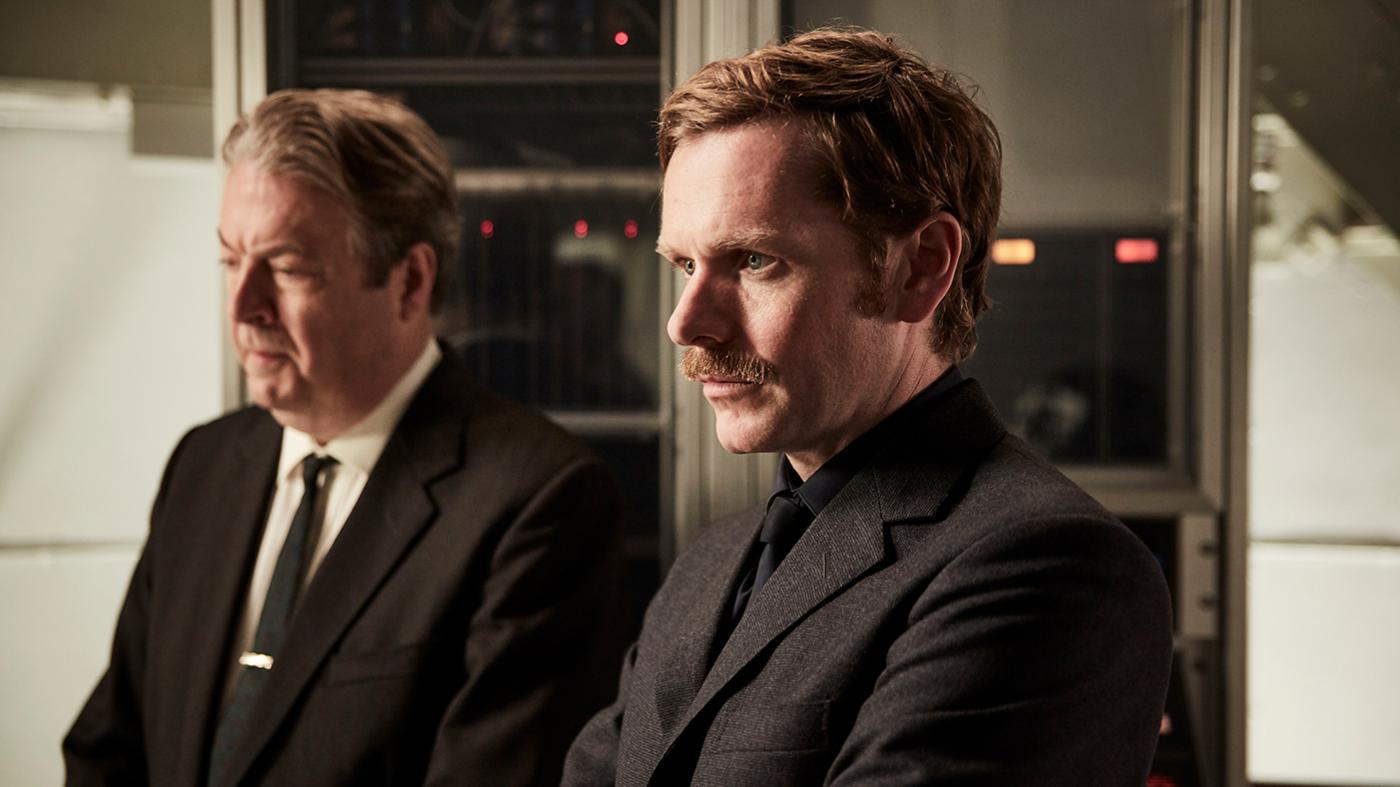 Photo: Jonathan Ford and Mammoth for ITV and MASTERPIECE

Morse is back at the same station as Thursday after a boring stint as a uniformed officer in a country district. But it’s not a rosy homecoming: the presiding officer, Box, makes it clear he’s not happy to have Morse around, so he’s placed in a windowless basement office, while Thursday has been assigned light duty after being roughed up by two men during a stakeout.

Morse’s first assignment is a car crash in the woods in which two people died. It’s the eve of the Apollo 11 launch, and the man driving the car was an astrophysics professor named Adam Drake who has been appearing on TV as an expert on space exploration. The other person killed in the crash was Drake’s girlfriend, Christine Chase. When Dr. DeBryn examines the bodies, the accident turns into a homicide investigation: Christine was dead from blunt force to the head before the car crashed.

Oddly enough, no personal items of Christine’s were found at the crash site, while Drake had an extra pair of car keys in his pocket. He and Christine had been at a party at a fellow professor’s home before the crash, and he was driving his colleague Larry Humbolt’s car because his own wouldn’t start. But the extra keys don’t match his car, which was left at the home of the Wingqvists, who hosted the party.

Box immediately rules that Drake must have killed Christine and then crashed before he could hide the body. Case closed, since the perpetrator is now dead. But Morse is unsettled by the loose ends, and enlists Thursday to help him continue the investigation.

Morse and Thursday go to the Wingqvist home to ask about the party and Drake. Natalie Wingqvist comes in from a bonfire outside to speak with them, and she, as well as her husband and the Humbolts, whom the detectives speak to later, characterizes Drake as a lady’s man who had a temper. Morse and Thursday also find Christine’s jacket, which contains a pay stub from Heaviside Studios – now they know where she worked.

Christine was a personal assistant to Jeff Slayton, the owner of the Studios, who created children’s puppet TV shows with his sister Hildy and their crew. Drake also had a connection to Heaviside: he was the scientific adviser on their new show about space. Eric Gidby, one of the puppeteers, found Drake to be an egomaniac who constantly made Eric feel stupid and small. The other people at Heaviside tell the detectives that Drake was constantly going on about a new course he was taking, and when Morse searches Drake’s home they discover a book published by the Single Way Institute.

Morse visits the Institute and discovers it is a sleek New Age-y place that offers primal scream therapy and teaches people to be more honest about what they want – or selfish, depending on your viewpoint.

A discovery about the car Drake was driving when he crashed vindicates Morse’s hunch that the incident was more complicated than Box assumed: the brakes had been bled of fluid. Someone had sabotaged the car – which means Christine must have been dead before leaving the party, as Drake couldn’t have pulled over to kill her since his brakes weren’t working.

Since Drake was driving Humbolt’s car, was someone trying to kill one of the Humbolts? Larry doesn’t drive, so were they going after his wife Isobel? The Humbolts have a troubled marriage, but they can’t think of anyone who wishes them harm.

Another death complicates the case. Eric Gidby, the puppeteer, is found at Heaviside Studios with a shot to the head; it appears that he committed suicide. He had tried once before, with pills and booze, after his first wife was killed in a hit-and-run, but Jeff Slayton, his best friend and the owner of Heaviside, found him and saved him. Eric had seemed to be happier since remarrying – his new wife is a fellow-puppeteer – but he was still obsessed with finding the person who killed his wife. Last week he even thought he saw the car that killed her at the Studios.

Box thinks it’s a suicide, and he reprimands both Morse and Thursday for continuing to investigate without him. His subordinate, Jago, won’t let Morse search Gidby’s car – Jago already did a quick once-over. Morse turns instead to Bright, who now heads up Traffic, to get information about Gidby’s first wife’s death. 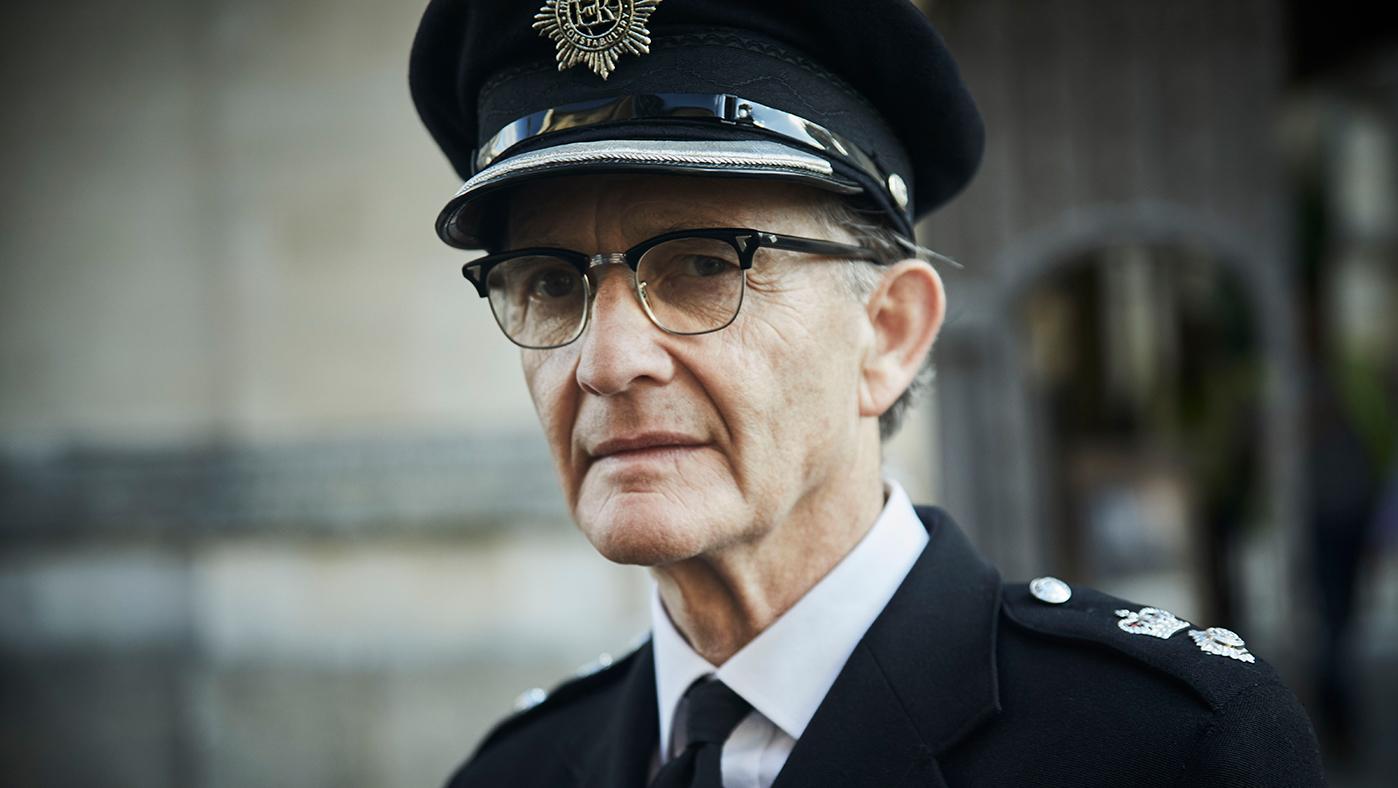 Morse does get an inadvertent tip from Strange, who is also at the scene, while they make light conversation. Strange mentions that he saw Joan at court. She was defending a young arsonist, Flora Humbolt, in her new job with Welfare.

Morse returns to speak to the Humbolts, but Larry and Isobel aren’t home. So Morse talks to Flora, who takes care of her younger brother while her parents scream at each other; the fire was just her acting out. She tells Morse that Adam Drake was often at the Humbolts’ house. He had invited her and her brother to Heaviside Studios last week to see the production of their new space show, so her mother drove them there.

Rechecking his leads, Morse returns to the Wingqqvists and finds them out, too. Instead, he speaks with their housekeeper, who says they host wild parties once a month, and after the most recent one they had cleaned up, which they never do. Morse also investigates the bonfire he saw last time he was at the house, and finds the burnt handle of a purse – Christine’s. The housekeeper says she found it under a bed after the party; Natalie Wingqvist burned it. And Morse also finds Adam Drake’s missing car keys in a bowl at the house.

With all of this new suspicious evidence, the detectives speak with the Humbolts and Wingqvists again, who finally admit that the parties were swinging parties. Everyone put their keys in a bowl, then partnered up with whoever’s keys they pulled out. Isobel had recently fallen in love with Adam, and they were planning to run away together.

Since Drake had an extra pair of keys in his pocket that the detectives have still not matched to a car, there must have been one other person at the party that everyone is hiding. Finally, they admit who it was: Gabriel Van Horne, part of the Single Way Institute, which all the couples attended.

Van Horne drew Drake’s keys from the bowl and left the party in a hurry, returning them later, which is why Drake had to borrow Humbolt’s car. Why did Van Horne leave in a hurry? His partner for the night was Christine. She was feeling woozy and left at one point. When he went to look for her, he found her dead; she had fallen down the stairs. She was Adam’s date, so Van Horne left him to deal with the body. No one else at the party told the police about the death because they wanted to protect their reputations; they didn’t want people to know about the swinging parties and ruin their careers.

Christine’s death is explained, but why was the Humbolts’ car sabotaged? Does it have something to do with their kids? Flora and her brother have disappeared suddenly, leaving a note telling their parents not to look for them.

Morse gets the report on Eric Gidby’s first wife’s death from Bright, and discovers that the Humbolts’ car – or at least the back half of their car – is the same one that killed Gidby’s wife, though the police never found the driver. The Humbolt car is actually two different cars fused together, and the back half was the one involved in the hit-and-run, not that the Humbolts would know that. Morse finally gets to search Gidby’s car and discovers a jar full of brake fluid in the trunk. It seems that Eric saw the car when Isobel brought her children to the studio, recognized it, and decided to take revenge, then committed suicide out of guilt.

This feels fishy to Morse, however, so he goes back to the Single Way Institute and, finding no one there, begins to listen to some recorded interviews of Adam Drake. From this, he learns that Drake had another paramour: Hildy Slayton, one of the co-owners of Heaviside. Drake describes her in the interview as obsessed, especially after he left her for Isobel.

Morse rushes to the Studios, where he finds Hildy pointing a gun at Isobel: Hildy pretended to be the police, telling Isobel that they had found her children, to lure her there. Hildy was jealous of Isobel’s affair with Drake and tried to kill her by sabotaging her car when she visited the studio. When it backfired and killed Drake instead, Hildy framed Eric Gidby by killing him and making it look like a suicide.

All loose ends are tied up – except the Humbolt children are still missing. Morse knows where to look for them – Flora told him about stargazing. He and Joan go to find them, then begin the process of finding a more suitable family for them, away from their fighting parents.