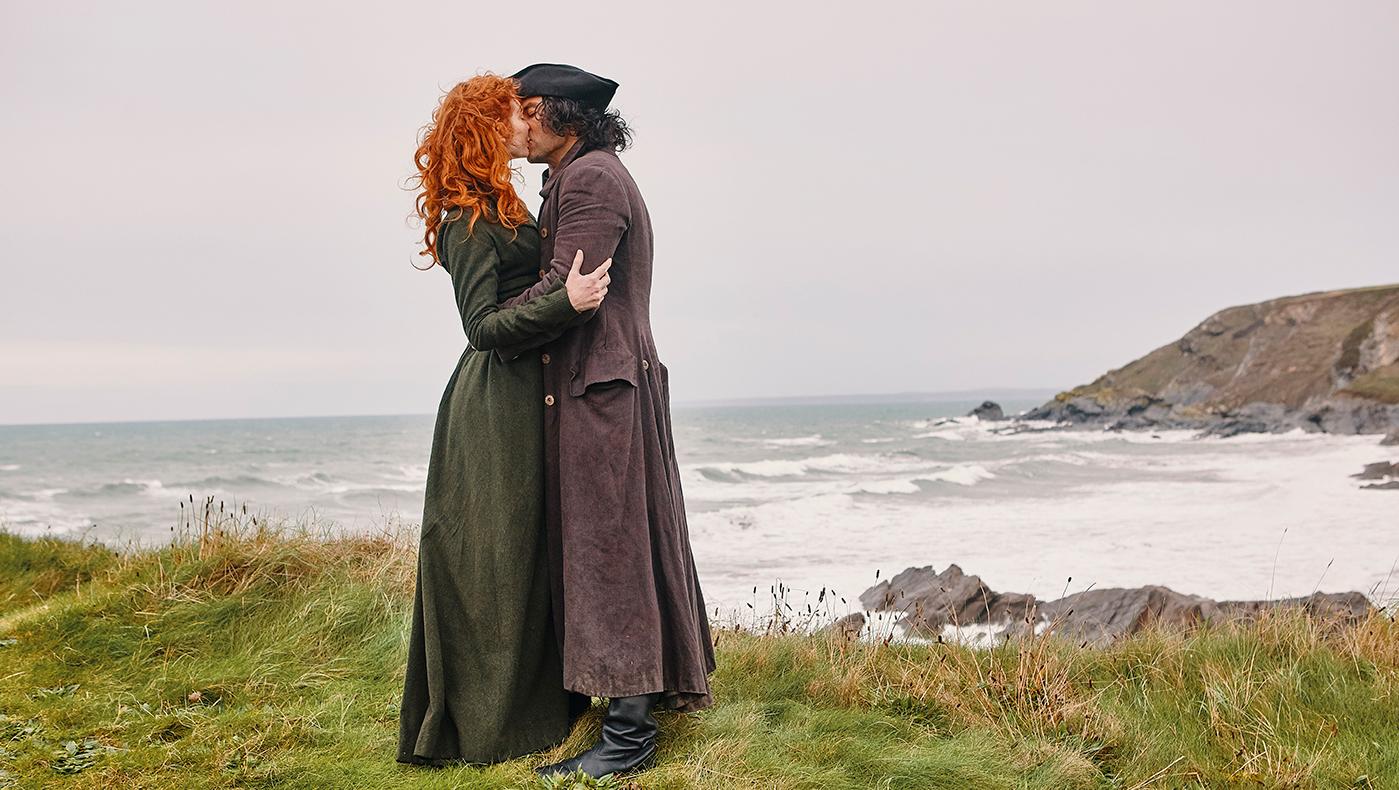 Poldark is available to stream. Recap the previous episode, or find our recaps of other episodes. Confused about who's who? Check out our handy guide to the characters.

Five months have passed, and Ross and Shady French Official (his real name is Laurent), are laying the groundwork for an invasion of England by General Toussaint and the French army. “Does your wife suspect anything?” Laurent asks Ross as they inspect the ammunition. “My wife knows her place,” replies Ross. (That would be a no.) Tess, clearly in the thick of whatever this is, slithers up to Ross and flirtatiously scratches his neck. “Not now,” Ross purrs. “We have work to do.” (What?)

Demelza is baffled – their ore is still going missing, and Ross hasn’t done anything about it. And what about the weapons hoard she found? Ross brushes her off – “a humble country squire should leave London matters alone.” Just then, they see that “London matters,” namely Hanson and Merceron, are meeting up with George and Cary at the local pub. Ross taunts Merceron – those pamphlets have made him a pariah in London. Look who’s talking, sneers George, given Ross’s “Jacobin leanings” and defense of Ned Despard. Ross laughs: “If your own country betrays you, to whom do you then owe loyalty?” Is Ross, indeed, a traitor?

That night at Nampara, Demelza notices the scratch on Ross’s neck; he lies about how he got it. Increasingly suspicious of Ross’s odd behavior and mysterious absences, the next day Demelza rides to Wheal Leisure – where Ross is supposed to be – and is devastated to witness Ross and Tess apparently arranging an assignation. She flees.

Cut to Drake and Morwenna’s home – she is very pregnant, and is passing off her students to Rosina. Morwenna is sorry that Rosina’s relationship with Sam didn’t work out, but reveals that he is no longer being seen with Tess. Even so, Rosina thinks it’s a lost cause.

From the bluff, George and Cary catch sight of Ross and Tess canoodling on the beach while Laurent and others offload something from a boat. George is delighted that Ross is cheating on his “scullery maid,” and later they speculate with Hanson and Merceron on whether Ross could be framed for treason.

Back at Nampara, Ross refuses to come clean to Demelza, so she, the children, and Prudie pack their belongings. “When did I lose you, Ross?” she asks mournfully. Ross assures her that she hasn’t lost him, but he’s a stranger to her now, so she’s done.

Cut to Killewarren, where Demelza, Prudie, and the children huddle awkwardly in the foyer as Dwight and Caroline carry on a whispered argument. Caroline is still obsessing over Dwight’s friendship with Kitty – it isn’t the first time he’s “fallen in love with someone else’s wife” (the ill-fated Keren Daniel in season one). Exasperated, Dwight tells Caroline and Demelza that he’s going to “do something [he] should have done months ago.”

At Nampara, Dwight has it out with Ross (as a Random Eavesdropper lurks outside): deceiving Demelza is wrong. He comes this close to telling Ross how and why Elizabeth died as an example of the consequences of subterfuge. To protect Demelza and his family and friends, Ross lies to Dwight that he doesn’t love Demelza anymore.  Dwight, shocked to the core, leaves without another word.

The next day, Geoffrey Charles (privy to Ross’s scheme) shares gossip about General Toussaint – he’s a noted strategist, expert swordsman, hedonist, and ladies’ man. Laurent rides up with the General himself, and they move in to occupy the now-empty Nampara. All of this is observed by Random Eavesdropper, who turns out to be spying on Ross for Merceron. Merceron and company are thrilled to have proof that Ross is colluding with the French, but George looks uneasy.

Ross gets Toussaint to divulge how and when the invasion will happen, and at last reveals his double-agent status to Dwight, asking him to hide under the floorboards at Nampara and write down everything Toussaint says. Meanwhile at Wheal Leisure, Ross orders Zacky, Sam, Drake, and Geoffrey Charles to gather a “spectacular” array of explosives.

At Killewarren, Demelza is all for packing up the children and leaving – maybe they’ll go to Jamaica to form a “band of sisters” with Kitty and Cecily (spin-off!). To stop her, Caroline, now in the know, spills the beans on Ross’s plot. Demelza is appalled that Ross has been deceiving not just her, but Tess. (Demelza is far too nice.) Should she leave Ross, or stay and help him?

Team Ross loads up on ordnance at Drake’s home. After they leave for the mine, of course, Morwenna goes into labor, with only Rosina to help her.

Cut to Dwight, scribbling madly, as above him, Ross is manipulating Toussaint into revealing every aspect of his invasion plan. Dwight hands off his notes to a London courier, but Merceron’s spy intercepts the courier and delivers them to Merceron, who will in turn give them to Toussaint, blowing Ross’s cover. George is clearly conflicted, as it means the French invasion will go forward.

As an unsuspecting Ross drinks with Toussaint, Demelza suddenly arrives. Shrewdly sizing up Ross’s guest, Demelza feigns an instant attraction to him and Toussaint takes the bait, but a gun-toting Hanson bursts in to expose Ross’s treachery. Toussaint borrows one of Hanson’s pistols and is about to dispatch Ross, but Demelza suggests that while she’ll be glad to be rid of this “fiend, liar, and bully,” Ross should be “humiliated” first, in a swordfight. Toussaint jumps at the chance to show off his prowess.

Down in the cave, as Laurent and his cronies guard the ammo, Drake tosses a smoke bomb into their midst, and in the confusion, Zacky lights a fuse. Boom! The French are walled in, for the time being. Cut to Morwenna, whose labor pains are getting intense, and Rosina is no help.

As Demelza and Hanson watch, Ross and Toussaint commence their epic do-or-die swordfight – Toussaint showing off for Demelza’s benefit, Ross fighting for his life. Ross punches Toussaint, throwing him for a loop. Impatiently, Hanson aims his pistol at Ross, but before he can shoot, gunshots ring out and Hanson and Toussaint fall. As the smoke clears, Ross and Demelza gape in astonishment – the gunman is George!

Toussaint is dead, but Hanson is just wounded. George, quailing, wonders if they should finish him off and dispose of both bodies (“who would know?”), but Ross, retrieving Dwight’s notes from Hanson’s pocket, has a better idea. As he and George head off for a glass of brandy, a young girl urgently summons Demelza to Drake and Morwenna’s, where Demelza quickly delivers Morwenna’s baby, a girl that Drake, arriving in the immediate aftermath, dubs “Loveday.”

Ross tries to thank George, who retorts that he didn’t shoot Toussaint and Hanson to save Ross, but out of loyalty to his country. As they toast, they agree to “revert to [their] usual animosity.”

That night in the bedroom, Ross marvels at Demelza’s genius in exploiting Toussaint’s vanity, but she tells him it was just instinct. He never should have kept things from her (duh!) and will strive to repay her for what he put her through. One thing leads to another…

The next day, everyone is at Nampara admiring little Loveday. As Caroline tearfully cradles the baby in her arms, she and Dwight are clearly thinking of the child they lost. Rosina pulls Sam aside – he is ashamed of having been duped by Tess, but Rosina would be happy to marry him if he would only ask her. (Evidently, he does.)

Later at Killewarren, Caroline confesses to Dwight that her jealousy over Kitty was merely an excuse for keeping him at a distance: she’s terrified of having – and losing – another child. Dwight too is afraid, but they decide to risk it together. One thing leads to another, as Horace watches...

In London, Wickham is satisfied – Ross has thwarted the invasion, the French prisoners are singing like canaries, and he’s back in favor with the Crown. Wickham suggests that it’s time for Ross to explore the “covert” role they previously discussed…

…and later in Cornwall, the magistrate Halse (played by Robin Ellis, the 1970s Ross Poldark) is roused from his bed – as are Hanson and Merceron in their nightshirts from jail – by Ross, who accuses them of “bribery, corruption, fraud, blackmail, false witness, mistreatment of prisoners, and murder.” Halse promises to lock them up, “for a considerable time.” “Your servant, sir,” says Ross, with a smile and a handshake. “And yours, sir.” (A nice final moment between the first Ross and his successor.)

George arrives at Nampara with news: he’s closing up Trenwith and moving to Truro with Cary and Valentine. Valentine wants a relationship with Ross, but George asks Ross to steer clear, as Valentine “is no relation” of his. As Demelza looks on knowingly, Ross reluctantly agrees. As George and his family pull away from Trenwith, a ghostly Elizabeth is gliding inside, perhaps to stay.

Cut to Sam and Rosina’s joyous wedding procession as Tess watches from the sidelines, bitter that Ross led her on. Ross reminds her that he saved her neck, and she’d better not forget it. As Tess exits in defeat, we learn that Geoffrey Charles has been reinstated at the military academy, Ross and Dwight are headed to France to be spies together, and Demelza is pregnant!

On the bluff as Ross’s ship awaits, he bids a poignant farewell to Demelza (and all of us), telling her, “I swear to you, my love…I will return.”

And that’s it! If you want to know what happens next, the story continues – after an 11-year gap – in book 8 in Winston Graham’s Poldark series, The Stranger From the Sea.