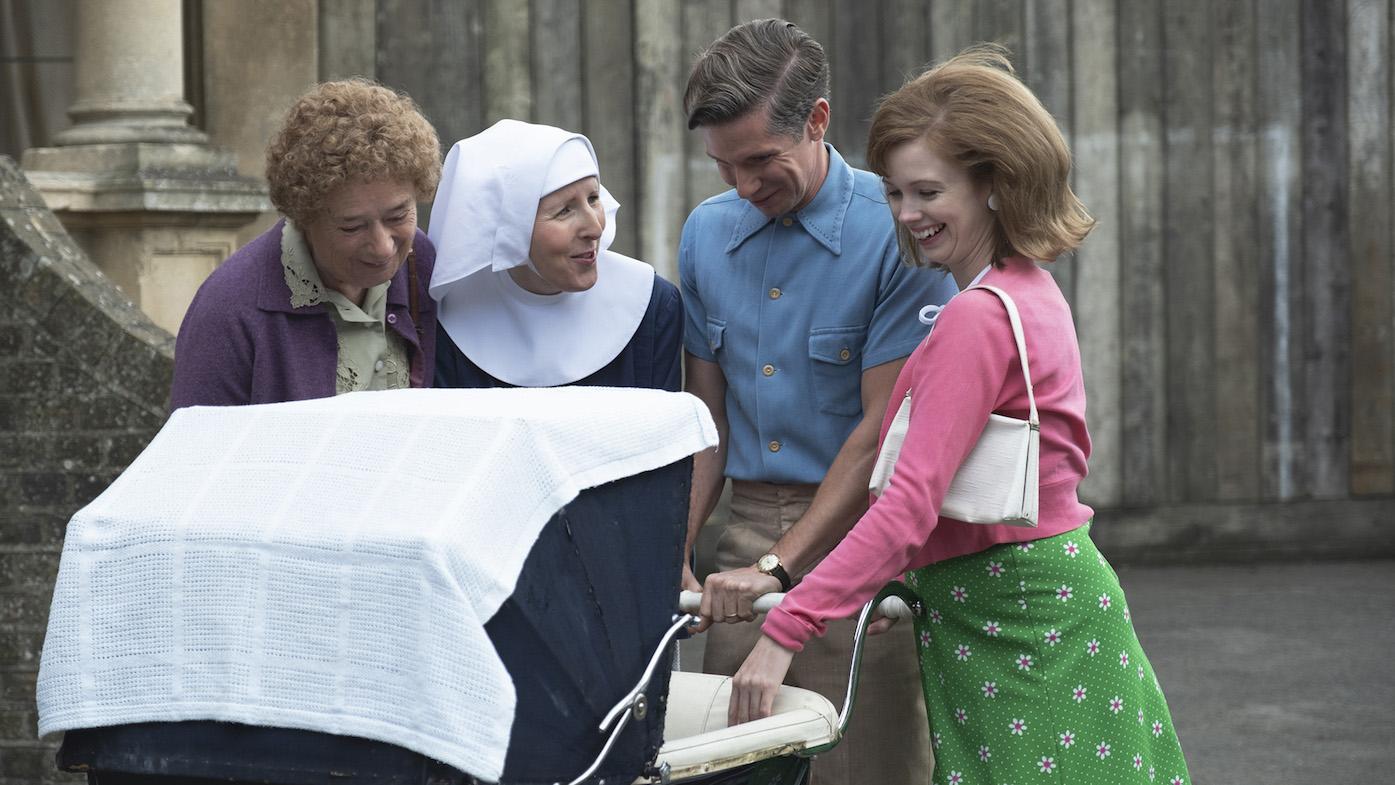 Sister Hilda and Nurse Crane have differing opinions about whether a husband should be involved with a birth. Photo: BBC / Neal Street Productions

Call the Midwife airs Sundays at 7:00 pm and is available to stream for a limited time. Recap the previous  and following episode, and read recaps of the previous three seasons.

The Sound of Music film starring Julie Andrews is coming out, and most of the midwives are eager to see it. Sister Monica Joan tries to convince Sister Julienne that Nonnatus House should take a communal outing to the movie theater, but Julienne refuses. So Monica Joan tries another outlet: Violet is hosting a raffle out of her shop for two tickets, to raise money for an incubator for the maternity clinic. Monica Joan gives Violet an IOU for a ticket, but is disappointed.

Julienne’s refusal to plan a group outing to the theater belies a recent accusation against her: that she and the other sisters don’t know what a hard day’s work is like. A woman has just died, and her granddaughter, whom Julienne delivered as a baby, has brought Nonnatus her grandmother’s savings: the elderly woman wanted the midwives to have it. But the granddaughter says they don’t deserve it; they know nothing of the hardship her grandmother endured.

When Sister Frances is met with coldness by Grace Calthorpe while visiting to give Grace’s husband Albert his insulin shots, Valerie suggests that a similar mindset might explain Grace’s antagonism. Women of her generation had only themselves to rely on during the lean years of the war, and might resent any aid.

Grace could use the help, however: in addition to caring for Albert, she visits her increasingly ailing mother daily to feed her and clean, while her own daughter Ingrid is due to have another baby, meaning Grace often has to watch Ingrid’s young daughter. Plus, Grace has been having back aches and bleeding—she thinks it’s just the run-up to menopause.

When Grace brings Ingrid to the clinic for a check-up, she makes an appointment for herself, too. But she has already missed one that she scheduled, and then misses this one, too—she just has too much to do. Once she finally makes it in, Dr. Turner discovers that she is anemic and has painful fibroids, which will require an hysterectomy. Grace balks at having to leave her family and be in the hospital for a couple weeks to recover from the operation.

When Sister Frances arrives at the Calthorpe flat to give Albert insulin, no one answers. A neighbor says Grace is at her mother’s, and Albert is probably asleep. So Frances visits Grace at her mother’s to get the keys. Grace is short with her, but acquiesces. Frances assumes Grace might not want to depend on someone else, and so later teaches her to give Albert his shot—another task for Grace to do.

While Sister Frances is at the Calthorpe’s, Ingrid barges in with her newborn: she’s moving in for a bit. Grace can care for her as well as the nurses at the hospital. Thrown off by the sudden chaos, Frances accidentally breaks a beloved scissors holder given to Grace by Albert. France promises to mend it, but Grace surprisingly doesn’t care. She’s just exhausted.

Grace is so overwhelmed that she considers killing herself by sticking her head in the oven. Fortunately, Sister Julienne arrives to check on Ingrid while Grace is sitting in front of the oven, startling her out of her despair. When Julienne apologetically tells Grace she doesn’t look well, Grace lashes out: how could a nun know hardship, or what it’s like to be a taken-for-granted, invisible middle-aged woman asked to do so much without thanks? 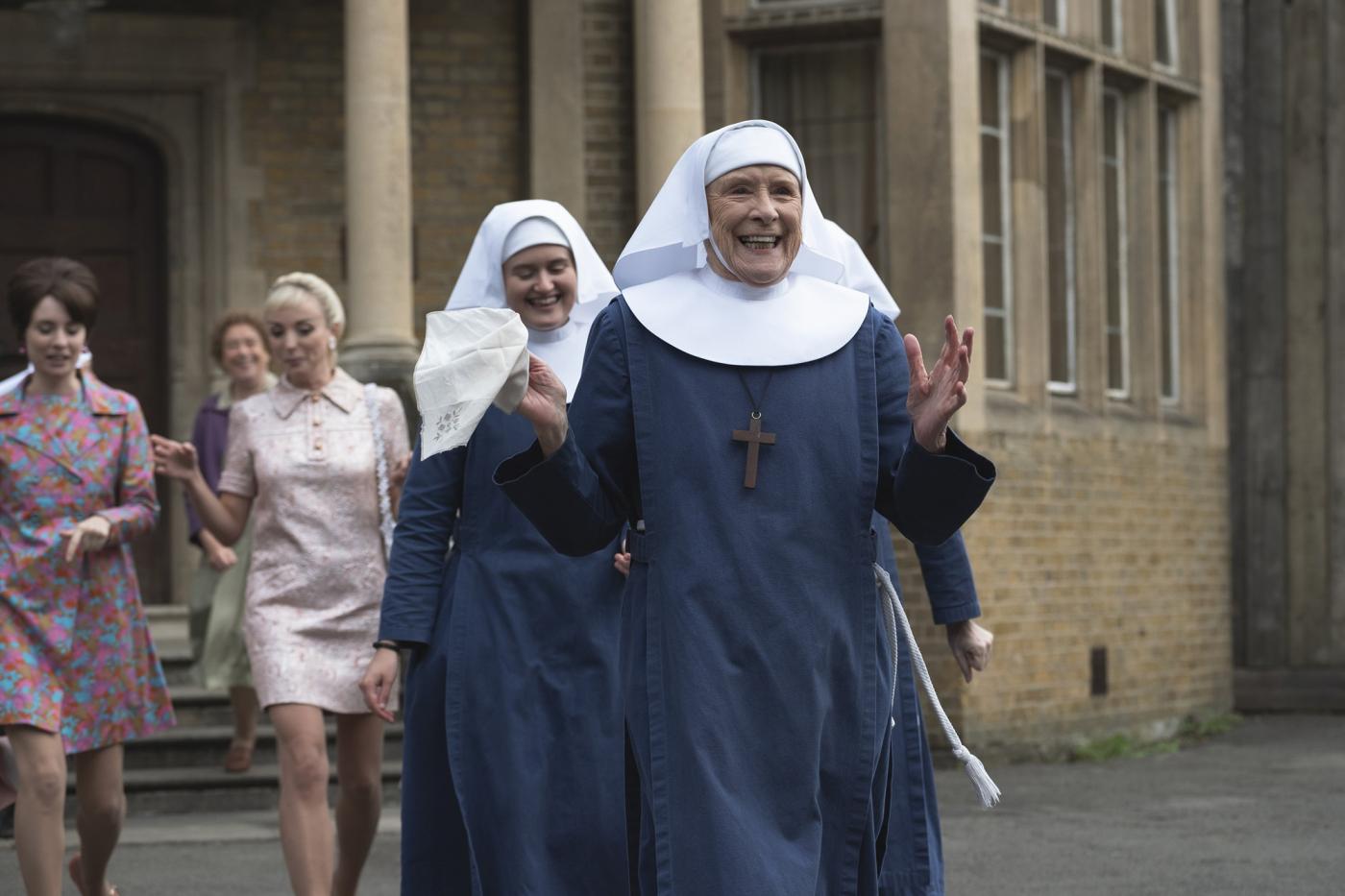 Sister Hilda is also on the receiving end of some anger that really has nothing to do with her. Ron Mallen is incredibly excited for his wife, Aileen, to give birth: he’s reading books and attending classes, and insists on being present for the birth. Sister Hilda lauds his eagerness, but when he arrives with Aileen at the maternity clinic after her water breaks, Nurse Crane is in attendance, and she’s not as keen on having husbands take part in the birth. Yet Ron is persistent, so she lets him hold Aileen’s hand while she delivers a baby boy.

The baby has a birthmark on his head, and when it grows in size Ron panics, rushing to find Dr. Turner. The doctor reassures him that it is nothing harmful and will probably disappear in a few years. But when Sister Hilda checks in and mentions the birthmark casually, Ron gets upset and storms off.

Sister Hilda finds him on the shores of the Thames—his father used to bring him there to watch the ships. But his father died in the Blitz, and when his mother remarried his stepfather was abusive. Ron just wants to be a good dad like his birth father—and Sister Hilda assures him he can be.

Sister Julienne is far more affected by Grace’s outburst. She takes off her habit and dons street clothes, then goes out into the world to experience it as an everyday woman. People knock into her; many don’t even notice her. Sister Monica Joan does, however, but keeps quiet. Julienne even goes to see The Sound of Music—and as she bites into an ice cream sandwich while the movie starts, a smile lights up her face.

Shelagh and Dr. Turner also get the chance to see the film, despite their filled lives: their children won Violet’s raffle, and gave the tickets to the Turners because it’s been so long since they’ve had a date night. The story obviously resonates with the Turners’ own lives, and they’re pleased to reassure themselves that they are happy with their relationship, despite the busyness. Dr. Turner later gives Shelagh “small and white” flowers, a substitute for edelweiss.

Grace’s hectic life is too much. When she collapses at home, she is brought to the hospital for treatment of her anemia, and for the fibroid operation. The collapse shows Sister Frances that Grace has been overwhelmed, so she brings Albert to the hospital to visit Grace, bearing some gifts. First, Sister Monica Joan has replaced the scissors holder, Frances broke. But Frances has also put in some work: she has found a care facility for Grace’s mother and home help for Grace with Albert. She will also teach Albert to do his own insulin shots, and she tells Ingrid it’s time for her to move out. Grace is grateful—and relieved.

Sister Monica Joan has still not seen The Sound of Music. But Sister Julienne’s recent experience has changed her mind: she digs into the money given to her by the recently deceased woman and pays for all the residents of Nonnatus to see the movie together.