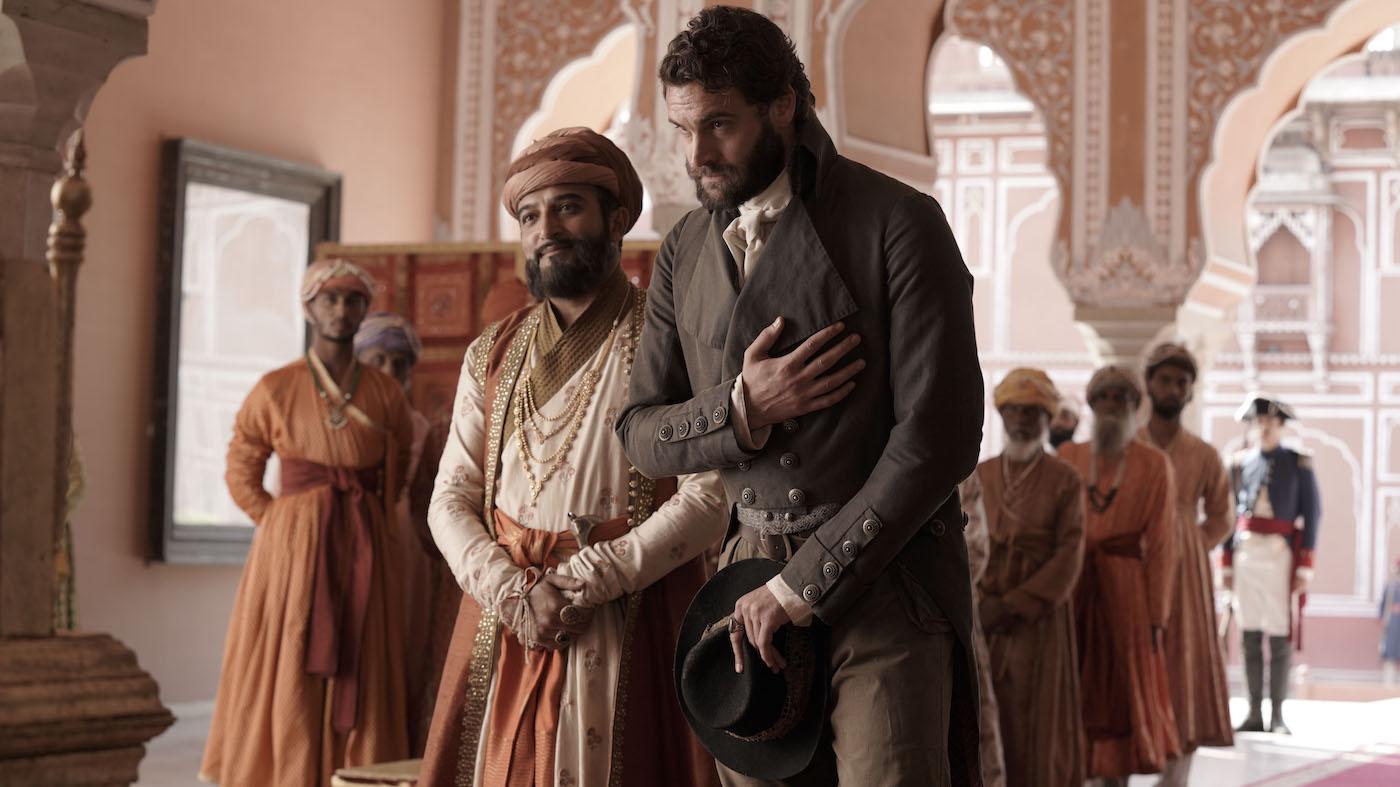 John Beecham wants to be an independent trader in Delhi, but is suspected of having devious intentions by the Shah. Photo: Masterpiece

Beecham House airs Sundays at 9:00 pm and is available to stream. Recap the following episode.

A man on a horse hears a commotion. Through brush, he sees an armed man pulling a wealthy-looking gentleman from a carriage in which two women sit, screaming. Dead bodies strew the ground. The bandit points a gun; the man on horseback shoots him before he can kill the gentleman. The gentleman asks who his rescuer is. “John Beecham,” he answers, and is shot.

Three years later: 1795. The servants of a grand house in Delhi are preparing for the arrival of a new master. When the sahib does arrive, Mool Chand, the house’s chef—he insists he not be called a mere cook—is excited that he’s an Englishman—John Beecham—because Mool Chand knows how to make English food.

Mool Chand is disappointed, however: John wants only a simple dinner of dal and rice. The servants are surprised further that he speaks Farsi and Urdu and has two women in his company, one of whom carries an infant. John gives the women and the baby the fine living quarters prepared for him. When Bindu, a gossipy female servant at the house, tries to question John’s two guards, Ram Lal and Gopal, about the baby, they are offended and leave her.

John tells Baadal, the head servant of the house, that his mother is on her way from England. He asks for a shaded patio to be converted to a chapel for her.

Baadal is helpful: when John receives an invitation to meet General Castillion, a French mercenary serving the emperor, Shah Alam, Baadal tells John that Castillion is “not a good man.” When John meets Castillion at the Red Fort, Baadal is privy to the conversation and learns more about his new master.

Castillion believes John is an agent of the East India Company, a British company that has seized complete control of Bengal in India’s east and reaped great profit at the expense of the native people. Castillion thinks John has been sent as the vanguard of a British incursion on Delhi. John insists that he is no longer a soldier or part of the East India Company; he is just an independent trader. In order to trade in the area, Castillion tells John, he must be granted a license from the emperor. He will introduce them.

That night, intruders scale the walls of Beecham House and escape without doing any harm. John orders the dense foliage along the wall to be cut back, so there’s nowhere to hide, but rejects Baadal’s suggestion to build a larger wall.

When he finds the foliage still there the next day, John begins to hack at it himself. He tells Baadal he misses being a soldier, and then receives a visitor: his neighbor, Murad Beg, who offers guards to help with the intruders and then invites John to a party the following night. After Murad leaves, Baadal tells John that Murad is related to the emperor’s wife, and that he will be a good friend and neighbor.

At the party, John is startled to see an Englishwoman. Murad notices his interest and introduces them: her name is Margaret Osborne, and she is the governess to Murad’s daughter, Roshanara. John invites her to his home to sample some of Mool Chand’s English food.

Just then, Castillion appears. Learning that he is planning to introduce John to Shah Alam, Murad offers to introduce him instead, as a relative of the emperor. After Margaret leaves them, Murad’s wife tells her that she has gained two new admirers: John and Castillion. 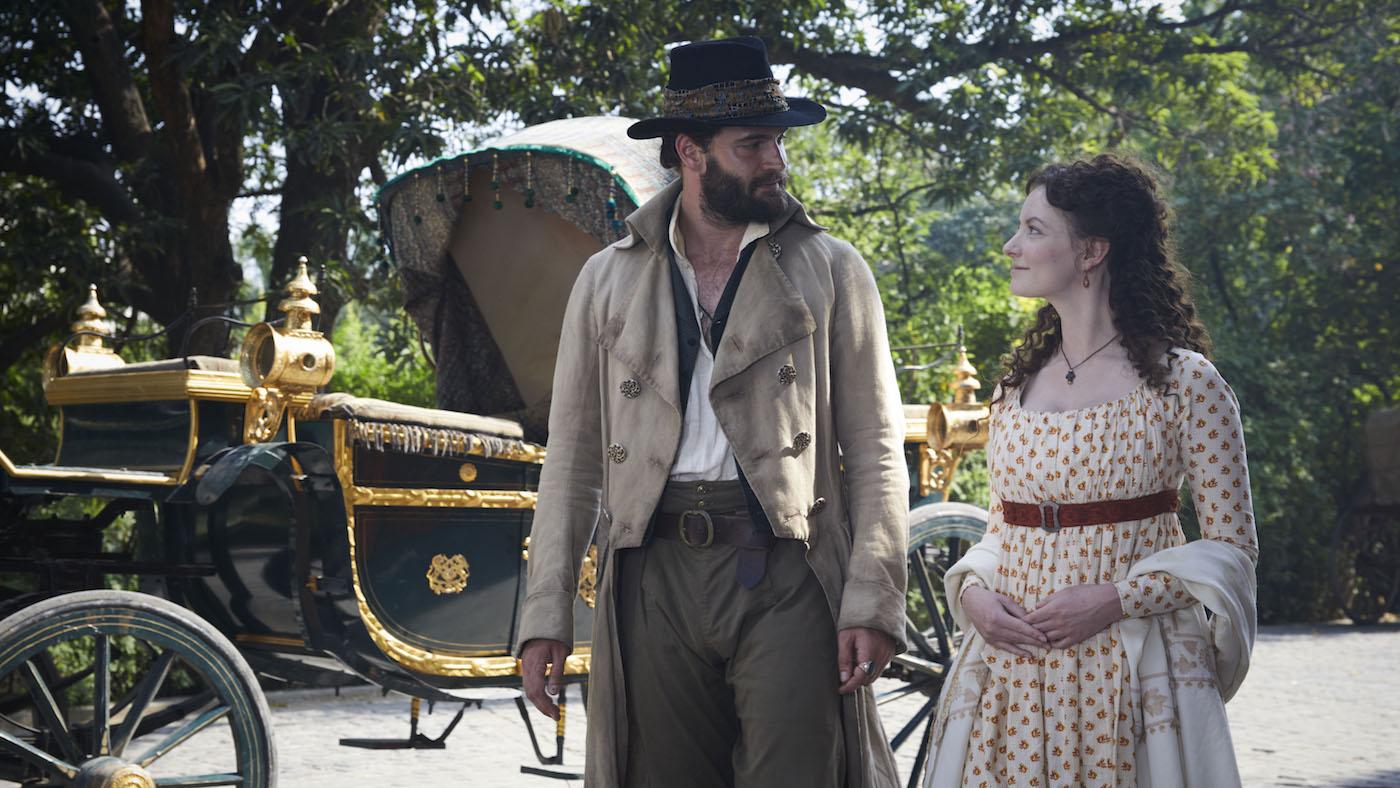 John is surprised to meet an Englishwoman, Margaret Osborne, in Delhi. Photo: Masterpiece

The next day, Murad brings John to the blind Shah Alam. John tries to charm the emperor, quoting the Shah’s poetry as well as decrying the East India Company and saying that India should be governed by Indians (sincere opinions, it seems). Castillion appears during the interview and advises the Shah not to grant John a trading license. Instead, the Shah asks John to find the perfect gift for the empress; then he will consider the license.

After John agrees and leaves, the Shah tells Castillion that he doesn’t trust John, either, but wants to observe his next move.

Back at Beecham House, Mool Chand gossips with Baadal about Chanchal, the younger woman brought by John who is taking care of the baby. She overhears, and criticizes Mool Chand’s food. Baadal is infatuated with Chanchal, and offers to help her in any way he can. She asks him to help her see Delhi, despite the disapproval of Gopal and Ram Lal.

After a feast of English desserts, John shows Margaret the chapel he has set up for his mother, and asks her to help his mother settle once she arrives. He also reveals that he left the East India Company because he disapproved of their dealings and wanted a new start in Delhi. She explains that she ended up a lone Englishwoman in Delhi after following her brother there in search of adventure; he abandoned her after he accrued debts.

When John’s mother Henrietta arrives in Delhi, he is surprised that she has two companions. He’s not so happy about the presence of a young lady named Violet whom he knew as a child, but he’s overjoyed to see Samuel Parker, an Englishman he knows from the East India Company. Samuel called on Henrietta in London, looking for John, then ran into her again in Calcutta and offered to accompany her to Delhi.

When the party arrives at Beecham House to find Margaret waiting, awkwardness ensues. Violet eyes her distastefully—Henrietta wants John to marry Violet and senses a rival.

While the ladies sit tensely, John asks Samuel about his life in another room. In London, Samuel gave evidence against the East India Company about their abuses in India, but they got off mostly scot-free. He lost money in a shipwreck and couldn’t find employment in England, so John asks him to join his trading business as a partner, and Samuel accepts.

Suddenly, the house’s baby starts to cry. Everyone except John is surprised. He goes upstairs and brings the baby down. It’s his son, August, he tells everyone. They are all startled; Margaret leaves.

Henrietta is at least heartened that there doesn’t appear to be a wife. She tells John that she would like to see his brother, Daniel. John grimaces—he doesn’t know where Daniel is. Later, Samuel tells him that he has heard Daniel is on an expedition with the East India Company near Delhi. His proximity could endanger John’s chances at a trading license from the Shah.