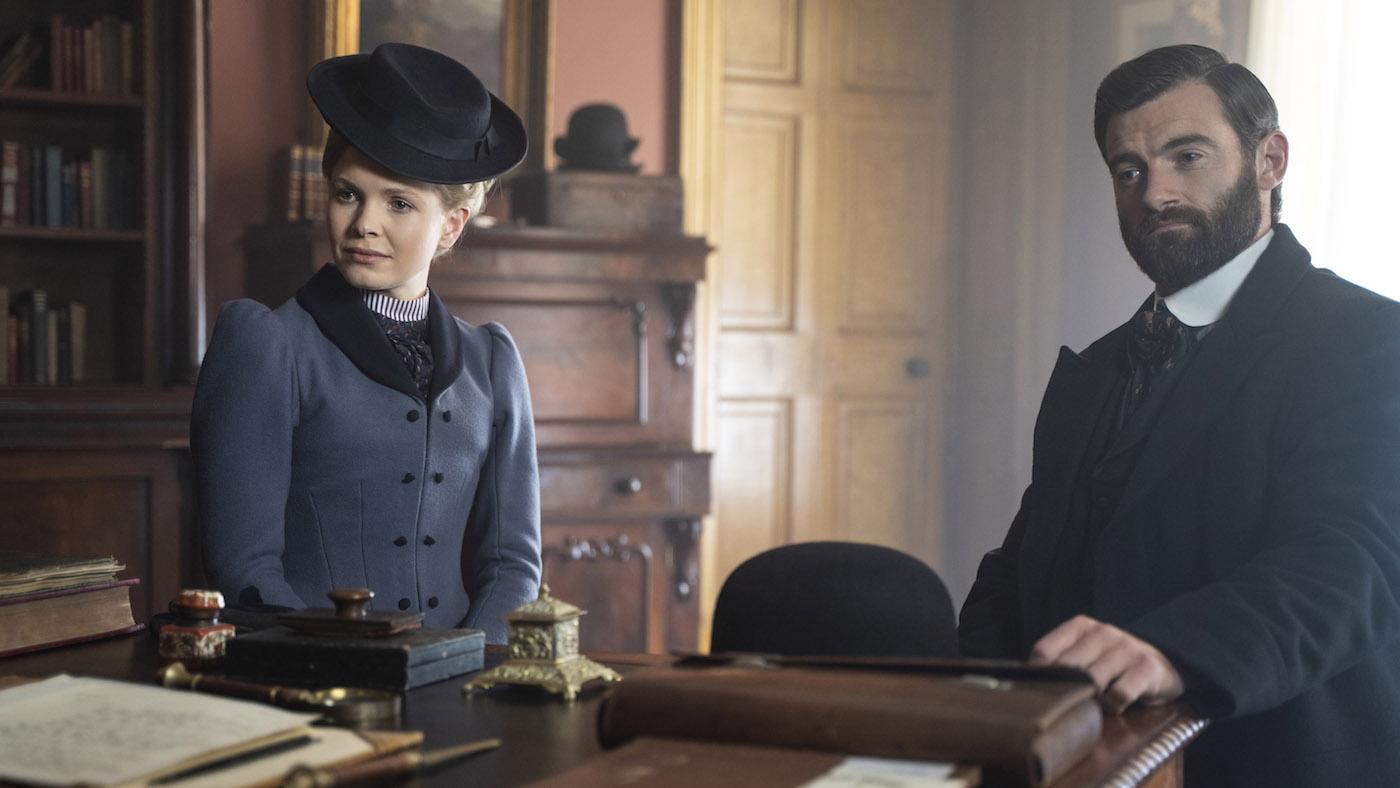 William has a job for Eliza—but it's not one she likes. Photo: Masterpiece

Eliza has a big break coming: a meeting with an influential client. Except he’s two hours late—and he’s William, perhaps delayed by a love of whiskey and women. He has a job for Eliza—official, from Scotland Yard—infiltrate a suffragette group and report back, despite the fact that they have not committed any crimes.

Eliza is conflicted, as she supports the suffragettes’ cause. But she assumes a false identity and attends a meeting. As Margaret Fairfax, the group’s leader, outlines a plan to protest outside Parliament when they vote on a law regarding women’s property rights, a constable disrupts the proceedings. Margaret refuses to follow his orders—and then he recognizes Eliza.

She pulls him outside before he blows her cover, and tells him she’s working for William as a detective. He laughs in her face. As the suffragettes appear to gawk, she slaps him in the face in anger. The constable takes her to the police station.

When Eliza is released by the police, thanks to William, she is met by Margaret. The suffragette explains her history: she did well in chemistry at school, but colleges won’t award women degrees. She wants Eliza to join the cause, but Eliza demurs—her situation is complicated.

At the next meeting of suffragettes, William and the constable intrude. William reveals Eliza’s real name, and asks where Margaret is: a witness saw her shoot a man dead. But no one knows her whereabouts

William brings Eliza to the morgue for a witness statement, since she was the last person to see Margaret—but instead she examines the body, to his and the mortician’s chagrin. The dead man is unidentified, but stains on his clothes suggest he was a pharmacist—perhaps a connection to Margaret, with her education in chemistry. Eliza criticizes William’s laziness in solving cases, and gets kicked out of the morgue.

Unfortunately, she needs William’s help to succeed as a female detective in a male-dominated world. So she learns more about Margaret with the help of Moses, including that she has an estranged brother, Terrence, then shares her information with William. He goes to Terrence’s club to question him, but Eliza can’t go: it’s men-only.

Terrence hasn’t seen his sister in years and doesn’t want to talk about her, but eventually admits that she brought shame on his family, funneling their money to suffragettes and into a legal case against his club, trying to force it to allow women. Her brother cut off her allowance after their father died, and mentions a tendency toward violence, calling Margaret “unhinged.”

Indeed, Margaret is waiting in Eliza’s office with a gun. She shows Eliza a bruise, saying the man she killed was just the latest man who tried to beat her into submission. Margaret accepts that she will hang for murder, but wants her story spread to help the suffragette cause. She will still protest in front of Parliament, and wants Eliza to join her. Eliza says no, but does agree to keep her meeting with Margaret secret.

William still believes it was a crime of passion, and forces Eliza to interview the suffragettes about Margaret—or else he won’t pay her. Eliza’s servant Ivy interrupts their meeting: a messenger is there to see William. Except it’s Moses, and he’s there to see Eliza. But William wants Moses to stop associating with Eliza, given his criminal record. Moses refuses William’s bribe to do so, but leaves peacefully.

All the suffragettes will give Eliza, however—other than denouncement for her involvement with the police—is that Margaret had an argument over charities with others in the group. Margaret insisted they give money to her college—from which she was expelled, according to her brother.

A college administrator tells William and Eliza that Margaret was expelled for “immoral conduct” with a chemistry professor. He faced no repercussions—until Margaret murdered him. He’s the unidentified dead man.

Eliza and William find the makings of a bomb in the professor’s rooms, and a “Votes for Women” flier. Eliza suspects Margaret is planning to bomb Parliament, and tells William about her encounter with the fugitive woman.

William is furious that Eliza was protecting a criminal, and tells her he never wants to work with her again. But then she realizes Margaret’s real plan. Margaret knew Eliza would tell William about her scheme, thus causing him to evacuate Parliament due to the bomb threat, sending most of the politicians to their gentlemen’s clubs. And that’s where the real attack would occur: at Margaret’s brother’s club, which she has long fought to join.

As Margaret plants a bomb there—she got a job as a maid—William arrests her. Under interrogation, she admits that she was paying the chemistry professor for the bomb, but he got cold feet so she killed him. He never hurt her; she bruised herself to gain sympathy with Eliza. She accuses Eliza of betraying women by working with the police and not supporting women’s emancipation more steadfastly.

William, getting credit for Eliza’s work, is commended by his superior for his success in the case. Some new posts will be opening up soon. William could be up for a promotion if he keeps it up.

Eliza decides to take her own small step towards advancing other women. She tells Ivy to take a break from her washing, and begins teaching her to read and write.