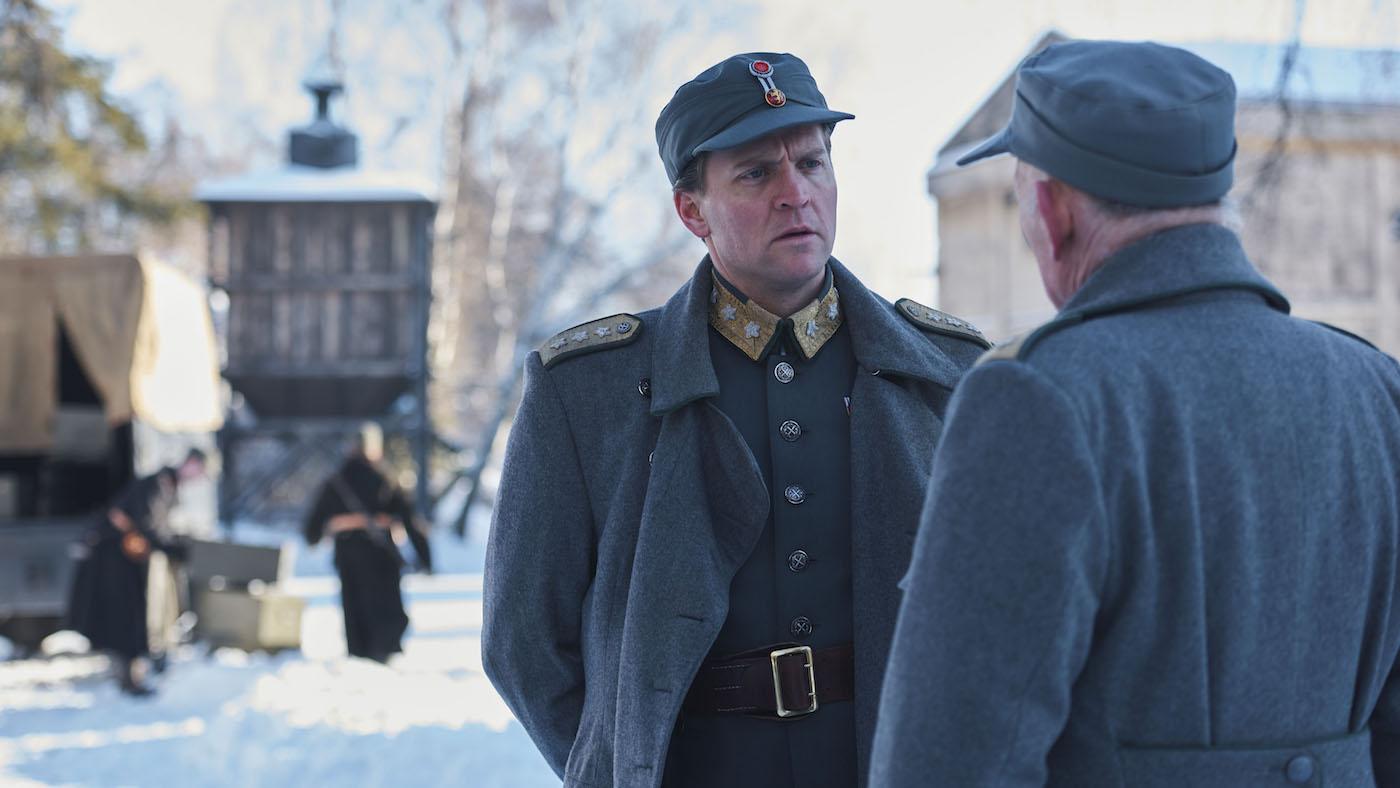 Crown Prince Olav is torn between military leadership and his duty to survive as Norway's next monarch. Photo: Masterpiece/Julie Vrabelová

Norway is trying to hold out in the face of German invasion long enough for British forces to save the unprepared country, but the government is continually forced to retreat further north. German planes bomb Elverum, where the government is hiding, forcing them to flee into the woods. Olav and Haakon both survive, but civilians are killed, as the United States ambassador to Norway, Florence Harriman, reports to Crown Princess Märtha when she finds her at a hotel in Sweden.

Harriman herself had to flee Elverum. She warns Märtha that the U.S. has intelligence that the Germans might bomb the hotel—they have spies everywhere and know Märtha is there. Märtha and her children must find a new refuge.

They move on to the royal palace in Stockholm, where her parents and uncle, King Gustav V of Sweden, live. The German ambassador notes her arrival, and warns Gustav that her presence might jeopardize Sweden’s neutrality.

Even with the arrival of British troops, Norway is in bad shape. The Brits are mostly reserves and not used to fighting in the snow. Olav suggests that Norwegian troops take advantage of their knowledge of the terrain and attack the Germans in small groups; for the good advice, a general recommends him to be the new, Cabinet-level chief of defense.

When the Cabinet votes on whether to name Olav to the position, however, he falls short of support. He has a symbolic duty as the Crown Prince; he cannot be in danger as a chief military officer. Haakon tells his son he needs him by his side through the conflict, but Olav wants to prove himself as a worthy prince to the Norwegian people.

Therefore, he offers to stay behind in Norway to show the people that their crown is not abandoning them after Germany’s advances northward finally force Haakon to contemplate fleeing to London. But Haakon refuses: if Olav were captured, he would become a bargaining chip. Furthermore, Haakon is aging, and Olav is the future of the country—he must survive.

So Olav and Haakon decide to flee to England with the Cabinet rather than surrender, despite their distaste for abandoning their country. They will exploit a loophole in the constitution allowing Haakon to rule from exile, thus continuing the struggle against Germany from afar.

Communication with Märtha is difficult. She has been told that British forces are pulling out of Norway and that the government is fleeing, but is unable to speak with Olav directly. A plane is to be sent to Stockholm to bring her and the children to the northern Norwegian town of Tromsø, where they will board a ship with Olav and Haakon to England.

But British forces can’t guarantee a safe flight and so refuse to risk picking up Märtha and her children. Olav and Haakon have to board the ship without them and leave Norway; Olav misses his daughter’s tenth birthday despite his hopes to be reunited for it.

A ship is attacked in the North Sea and sends out a distress signal, but Olav and Haakon’s ship cannot go help them—the Germans are after the Norwegian royals, and they must be brought to safety. Given the treacherous waters and air, Britain’s King George VI (Olav’s cousin) tells Olav upon his arrival in London that it’s too dangerous for Märtha to travel to England.

In Stockholm, an increasingly anxious King Gustav urges Märtha to return to Norway with her children and set up a regency with her son Harald, the heir to the throne. Either she makes peace with Germany in this way or Germany will set up its own government and Norway will cease to exist, Gustav argues. Haakon should have followed his brother’s example in Denmark and surrendered.

Märtha doesn’t know what to decide and is unable to reach Olav. In London, Haakon is furious when he hears of Gustav’s idea and refuses it outright. Olav decides that they must get Märtha and the children out of Sweden to still-neutral, safe America.

The American public is against the U.S. involving itself in the war, but FDR wants to help Norway’s royal family. He will send an American ship to pick up Märtha, telling the Germans it’s simply carrying Americans who wanted to come home.

When Märtha and her parents hear the plan via telegram, they’re shocked. Märtha faints in fear. Florence Harriman visits her in the hospital and tells her that King Gustav seems to be sympathizing with Germany: fearful of provoking Hitler, he threatened to abdicate when the Swedish Cabinet refused to allow German troops to move through neutral Sweden to Norway.

We’re no longer safe in Sweden, Märtha decides. She will take the American boat.

She and the children travel to Finland and meet Harriman there. Harriman warns Märtha to lie low, lest she is recognized by Norwegian fishermen; the Americans don’t want people to know Märtha and her family are on the ship. But as they row out to the docked ship, some fishermen notice her and begin to sing and cheer Harald. After a moment’s hesitation, Märtha proudly stands Harald up in the boat to wave to her countrymen as they salute a symbol of Norway’s resistance.