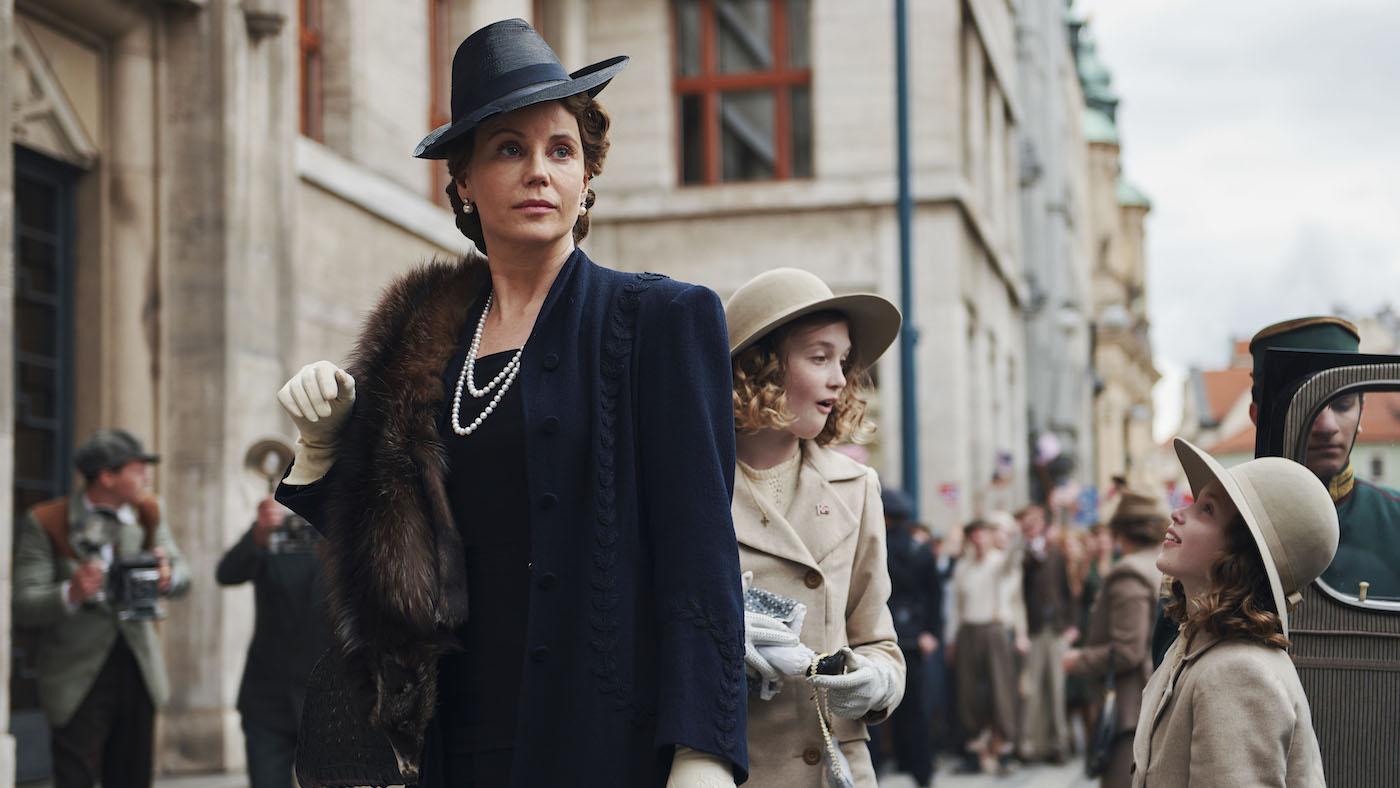 The American ship carrying Märtha and her children is sailing through a blockade to reach the United States, despite the Norwegians’ fears. Although the royal family has safely escaped Europe, there is still plenty of danger. The ship barely misses a mine; Harald almost eats the cyanide capsules Märtha is carrying with her in case of capture.

When the ship finally reaches New York and the Statue of Liberty comes into view, Märtha discards the cyanide into the ocean. She and her children are safe.

But duty awaits. As the family arrives at the Waldorf Astoria, the Norwegian ambassador Morgenstierne welcomes them and informs Märtha that the press is waiting; he has prepared a statement for her. She insists on speaking to Olav first, and finally connects with him on the phone after four months apart. She asks when he is coming to New York; he says he must stay in London with his father and the Norwegian government in exile.

When she gets off the phone, with a press conference waiting, Märtha has a nervous attack, collapsing on a sofa. After being restored, she hesitantly steps in front of the reporters and stumbles through a statement and some questions.

FDR is listening. He invites Märtha and her children to his upstate New York home for the weekend. As they arrive, he hands each child a gift. Morgenstierne angles for an audience, but FDR heads it off by asking Märtha to go for a drive, while his secretary Missy LeHand sends Morgenstierne away empty-handed.

FDR speeds off to lose his Secret Service minders. As he enjoys his freedom, he asks Märtha where she and the children will be staying. Morgenstierne has lodgings set up in Massachusetts, but Märtha says she’d rather stay in New York City.

Later, in the garden at his estate, the topic of lodging is again brought up and FDR suggests Washington, D.C. The pleasant gathering is interrupted by ominous news: London is being bombed. Märtha tries desperately to reach Olav but is unable to connect with him. Noting her distress, FDR suggests she come to the White House: they have a direct line to London.

Olav and Haakon have been worried that Germany might attack Britain, but their host King George VI has shrugged them off. The palace does seem unprepared: when Olav and Haakon urge the king to test his emergency alarm, the guards’ response is laughable.

Fortunately, the palace’s basement shelters are deep in the earth, safe from the bombing. Olav, Haakon, and the British royal family are unhurt. Olav suggests that he, Haakon, and Norway’s government-in-exile go to America—if Britain falls, so too does the last vestige of Norway’s government. But America is neutral, as Haakon points out, so Olav suggests Canada: from there they could build support among Norwegian Americans and build up a fighting force.

King George and his family will never evacuate London, and Haakon also rules out fleeing all the way to America. Olav snaps at Haakon: he’s sick of his father telling him that he must survive and is the future of the country as the heir to the throne. Haakon, hurt, tells Olav to just go to America.

Olav and Haakon also disagree on Norwegian military strategy. Olav sides with General Fleischer, who wants to build up a “Norwegian Brigade” to eventually invade Norway after destabilizing the Germans there—no matter that so far the brigade lacks weapons and consists mainly of whalers. Fleischer also disagrees with a plan to establish a Norwegian airbase in Canada, because the British Royal Air Force would be training Norwegian pilots there to protect Britain, not to take back Norway.

Olav demands to know from his father and the prime minister why Fleischer’s ideas are being ignored. Fleischer is too belligerent, they tell him. Norway is too small; it must partner with Britain and allies to be successful, not go it alone in a doomed effort.

Haakon does have a task for Olav beyond military planning: have Märtha get Morgenstierne an audience with FDR.

Olav has already told Märtha that she should take FDR up on his offer to stay in the White House: it gives her access to the most powerful man in the world. He has given up on his idea of moving Norway’s government-in-exile to America, despite FDR’s offer of safety. Olav, Haakon, and the government must stay in Europe while the war continues and take part in the fight.

Märtha is devastated that she and her children will not be joined by Olav anytime soon.

She’s perplexed by FDR’s marriage. Eleanor never seems to be around, other than to suggest policies such as taking in Jewish refugees, while FDR’s secretary Missy treats him like a husband. Märtha’s assistant Ragni explains the rumors surrounding everyone: that Eleanor lives with a woman in New York, and FDR has had affairs. She also warns that the president is infatuated with Märtha—in the midst of a reelection campaign, he is spending loads of time with her. He even has her children calling him “godfather.”

When Missy again asks Märtha where she and the children will be living, in an effort to get her to move out of the White House after an extended stay, Märtha says she has changed her mind. She’d like to stay in D.C., close to the ambassador. FDR insists that they go look at houses for her that very minute, no matter his obligations for the day.

When he and Märtha return that evening having found a place to rent, Märtha tells Missy that she’s no threat to her and the way things have always been at the White House. She’s Princess of Norway, and things will soon return to normal. Missy responds that Märtha shouldn’t be too sure of that. If Hitler wins, she’ll soon be queen of nothing.