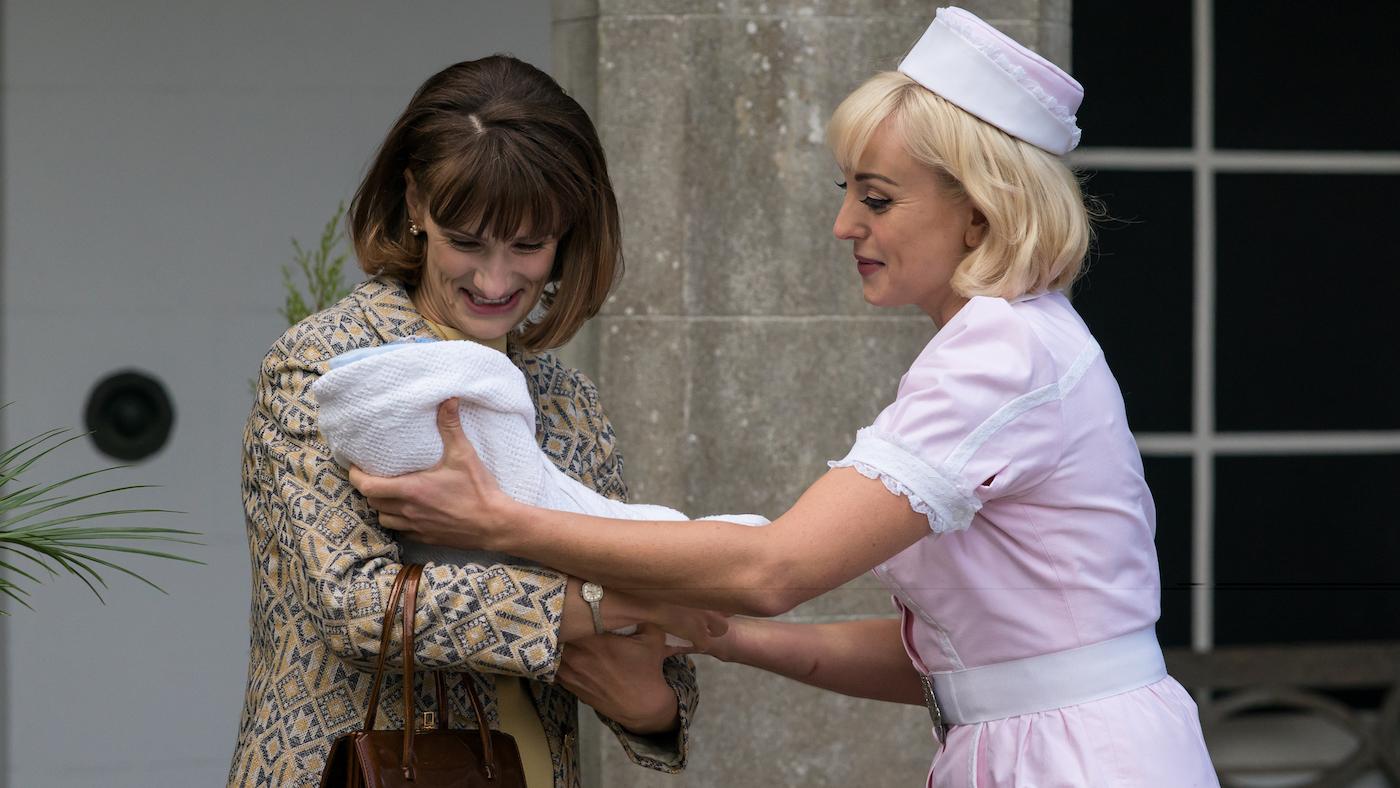 The Buckles need to hire an assistant for their new general store so that Fred is freed up to work in the allotment and tend to his other duties, but first they need to rent the upstairs flat so that they can afford an employee. Cyril’s rooming house has been condemned, so he needs a place to stay. But the Buckle flat is far too expensive, even at their generously low rate.

Lucille comes up with a creative solution: her and Cyril’s church needs a new home, so she suggests that the church rent the Buckle’s flat and let Cyril live there. Fred happily agrees.

Nonnatus House also has its money problems, but Sister Julienne has contrived a plan: they can send midwives to work at a private clinic in the wealthiest neighborhood in London in order to raise money to treat their poor clients in Poplar. The Lady Emily clinic must first be determined to be fit, so Julienne sends Trixie to work there for six weeks.

Trixie is eager to do it, especially because the uniforms are fashionable and fine. Upon seeing the pink outfit, Sister Hilda approaches Sister Julienne with the suggestion that the Nonnatans’ habits be updated, if they are go to work alongside such chic nurses. Sister Julienne surprisingly acquiesces. Violet designs them and then helps model one of three styles, alongside a happy Sister Hilda and a shy Sister Frances.

Trixie is surprised by the clinic and the mores of the upper class. The clinic’s Dr. Scarisbrick warms his hands with a hot water bottle before touching the patients. The husbands don’t join their wives in consultations, and one woman, Fiona Aylward, who quit her advertising job to have her baby, is admitted to stay at the clinic for a minor case of anemia just so she can take iron pills.

It’s a very different life from the women of Poplar. Derek Fleming has a “delicate stomach” that he cures by eating rice pudding from a can, while his pregnant wife Audrey pops over to the neighbors, the Winches, to help Glenys and Bobby with their twins. Glenys is pregnant again, and begging Dr. Turner to reassure her that it’s not twins again.

Dr. Turner is incensed by Sister Julienne’s plan to work at a private hospital—he firmly believes that all medicine should be free. He begins to pointedly mention the lack of cost at the Poplar clinic in his interactions with Julienne.

When Derek Fleming coughs up blood, Dr. Turner refers him to the hospital, where he is prescribed antacids but has to stay the night. When Audrey goes into labor, Derek dashes home but is quickly sent outside by Lucille and Sister Frances to wait until the birth is finished.

Glenys goes into labor at the same time, and Sister Julienne easily delivers a baby girl. As she’s leaving, she hears wailing coming from the Fleming home and stops in. Audrey’s son was born without full legs and never starts to breathe. Sister Julienne stays with the Flemings overnight, keeping their newborn cool with ice so that they can spend more time with him before he is taken away. When Glenys’s newborn daughter cries in the morning, Audrey starts awake, thinking it is her son. Sister Julienne and Lucille wash him in special soap that Derek carried with him while serving at sea to remind him of Audrey, then take away his body. 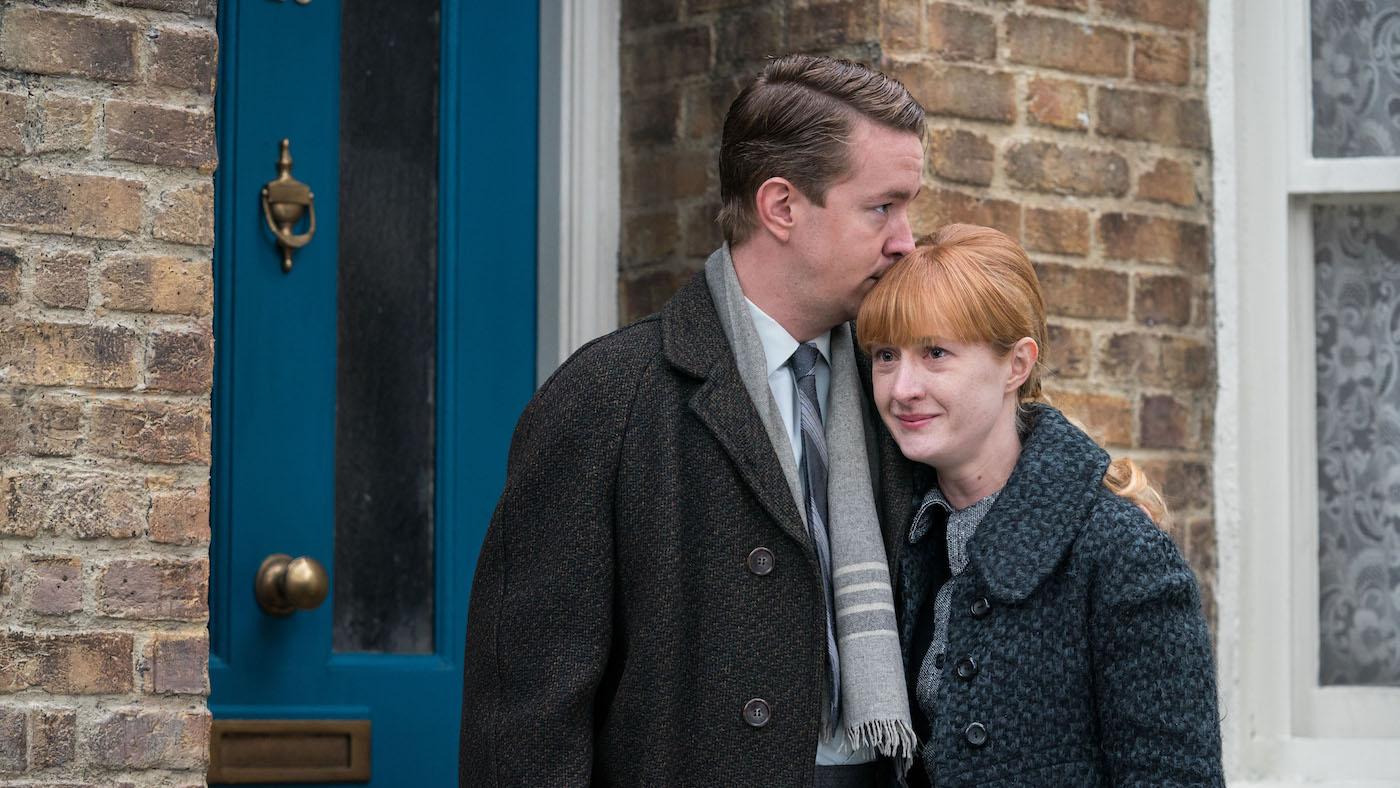 Audrey and Derek Fleming have been trying to have a child for years. Photo: Neal Street Productions

Sister Frances is devastated by the death, so Phyllis asks Sister Monica Joan to speak to her and share her wisdom. Monica Joan is still recovering after breaking a leg, but has been depressed and unwilling to leave her room much. She tells Phyllis she can’t help.

Trixie thinks she can help the women at Lady Emily. She speaks to Dr. Scarisbrick and tells him that, while he treats his patients exceedingly well, he sometimes doesn’t offer them what they need as women. He should let his midwives do more. He lets Trixie take charge of Fiona Aylward to see her approach.

Trixie has Fiona’s husband attend the birth, which goes smoothly. Later she finds him standing over his newborn, and she lets him hold the baby, despite another nurse’s counsel.

Bobby Winch takes Derek Fleming out for a drink to console him. They served together in the navy. When Bobby mentions that one of his daughters was born without three of her fingers, Derek has a thought. When they were serving together, many of them came down with bad food poisoning—might that have affected them and their children, he asks Dr. Turner? Derek has his ulcer and Bobby still has bad heartburn.

Dr. Turner learns that the men were present for a nuclear test, and tries to get records from the government about their service. But they’re confidential. He locates another man who served with them and recently died of leukemia. His government records have supposedly been lost.

Bobby explains to the Turners that Derek was stationed closer to the nuclear test than he was. Derek is soon rushed to the hospital because of a hemorrhage. Part of his stomach is removed. Dr. Turner tells the Flemings that he thinks Derek and his unit may have been exposed to radiation. The Flemings promise that they will pursue an inquiry, now that they have lost their son.

While working in the allotment, Fred is surprised that Sister Monica Joan doesn’t want to tend to her flowers. She admits that her faith is failing her; she is having a dark night of the soul. Tell no one, she says. Only God can help me, and if He doesn’t exist then her life has been wasted.