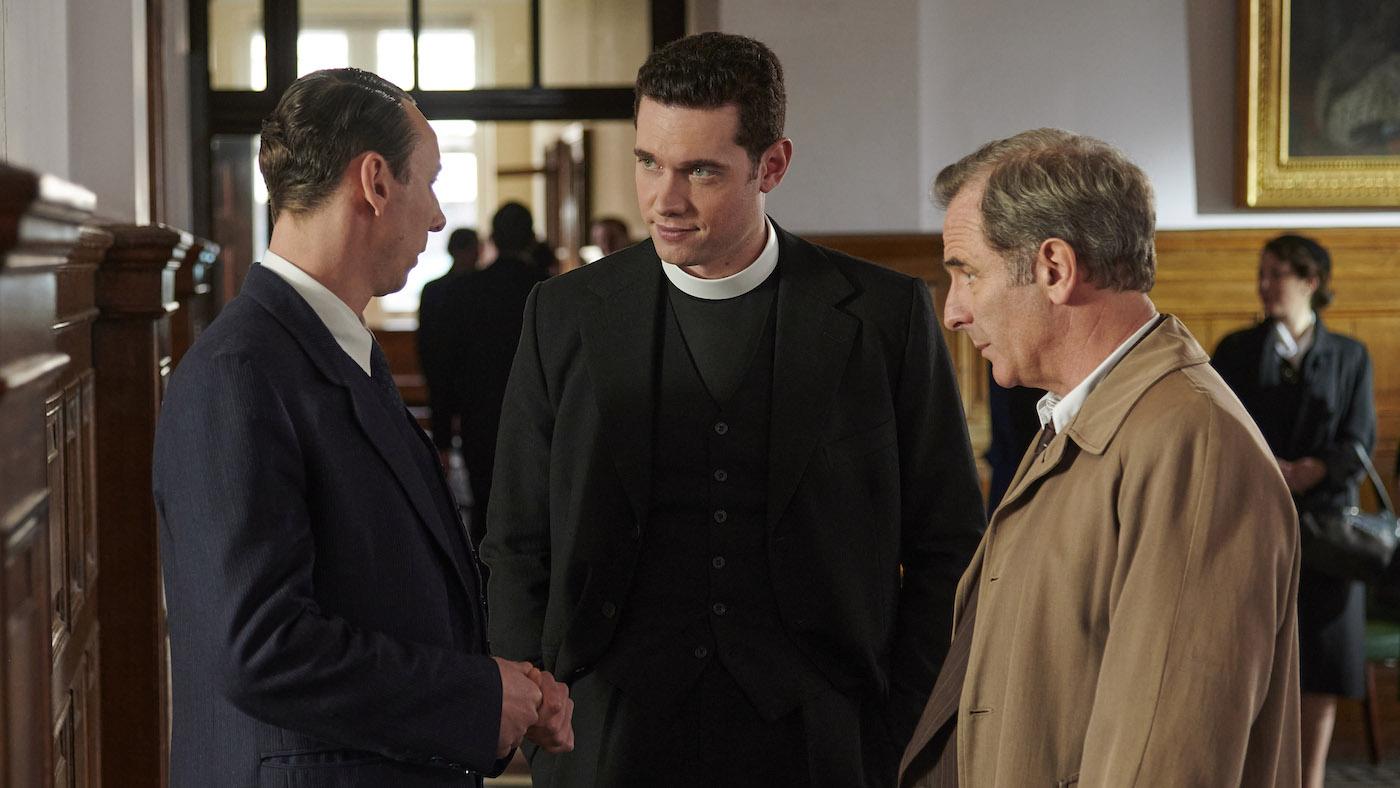 Leonard and Geordie both advise Will not to testify in Leonard's trial, given the possible repercussions to himself. Photo: Masterpiece and Kudos

As Leonard’s trial approaches, Cathy organizes support for him, writing a defense of him in the local paper, gathering women to cheer him at court, and speaking to Mrs. C. after she asks Jack not to be Leonard’s character witness. Ladies have been shunning Mrs. C., and she doesn’t want to be looked down upon—she spent most of her life that way. She wishes she had never found out Leonard was gay, but he’s happy she did: she got to know him in full and still love him.

Leonard asked Jack to be his witness in order to protect Will from any repercussions, to Will’s chagrin. But Leonard is right: the bishop explicitly warns Will not to speak in court and pull the church further “into the mire.” He also informs Leonard that he will be terminated and lose his license to be clergy, regardless of the outcome of the trial.

Meanwhile, Will and Geordie have a bank robbery to distract them. They find Wilson Black, a bank guard, tied up and beaten in the back of his van, and set off in hot pursuit of the suspect, who flees on foot after crashing. Will chases after him and bests him in fisticuffs while Geordie stays behind to tend to a distraught older man and his wife, who was hit in the crash. She’s dead.

£1,000 was taken from the bank, but Malcy, the man caught fleeing the scene, says he didn’t rob the bank and that the woman’s death was an accident. Wilson doesn’t identify Malcy as his assailant in a line-up, and Malcy refuses to answer more questions until he has his lawyer.

The emergency call about the robbery came from the library, so Will and Geordie visit to speak to the caller. A librarian, Lily Bradley, identifies herself. At the police station, she points to Malcy as the man she saw robbing the van. Brought back into an interrogation room, he confesses to everything and claims to have thrown the money out the window of the car.

Will finds Malcy’s confession suspicious: it doesn’t quite match Wilson’s description of events, and the knots on Wilson would have taken minutes to tie, whereas Lily’s emergency call mentioning a man getting in and out of the van lasted only a few seconds. Was the robbery staged? When questioned, Wilson insists on his lawyer—the same one as Malcy.

Turns out the lawyer, Johnny, is an old comrade of Geordie’s from his army days. Johnny has represented both Wilson and Malcy on and off for years, but he shares his correspondence with them with Geordie when Geordie asks if someone else is bankrolling them—lawyers are expensive.

Geordie is perplexed by Malcy’s sudden reversal, and suspects the involvement of a woman. So he brings Lily back in to identify Wilson. She says she only knows him from the robbery. Wilson then admits—through Johnny—to conspiring with Malcy to stage the robbery. He refuses to answer when asked if someone else is behind the whole scheme.

As Lily is leaving, Geordie asks her from afar if she recognizes the van from the robbery. She says yes, without putting on her glasses—something she did before identifying both Malcy and Wilson. It must have been a signal to them to confess. Indeed, her glasses are fake.

But the money has yet to be recovered—until Will realizes that a paper with numbers on it in Malcy’s car is a library book number. Looking it up at the library, he finds the book filled with the money, minus £50. Lily says that the library is a public building; anyone could have put the money there. They have no evidence tying her to the conspiracy—and only Malcy’s fingerprints can be found on the book. Lily is released.

At the courthouse, Leonard pleads guilty. The prosecutor asks if he approves of homosexuality, grinding against Leonard’s non-answers. God can’t possibly love you, the prosecutor bellows, berating Leonard, who whimpers, “I’ve always doubted that He could love me.”

Will is furious, and insists on replacing Jack as witness, despite everyone’s warnings about the damage it could do to Will. Leonard wasn’t worried for himself today, but for me, he tells the court. I consider him a brother. Please don’t punish him.

Everyone agrees Will’s speech was sensational, and Leonard is relieved to have finally admitted the truth about himself in public. He tells Mrs. C. that she has made him fearless: she was always so uncaring of what others thought. I’ve never been happier than I have been with you, he tells her—even when she’s cross.

Will tells Leonard he will pay his fine if that’s the judgment Leonard receives, as everyone expects. What are your plans? he asks. Leonard is thinking of moving some place with Daniel where no one knows either of them.

But that plan is not to be. The judge was prepared to give a fine, but because Leonard is clergy and meant to set an example for others, he will be sentenced to six months in prison. As Leonard is driven away in handcuffs, Mrs. C. joins Cathy and the women she has organized to support Leonard, standing proudly with them. Later, she informs Daniel of the sentence. I’ll be lost without him, Daniel says. Me too, she replies, holding his hand.

Geordie finds himself doubting the law, he tells Johnny when the lawyer finds him at the pub. You still believe in the fairy tale of doing what’s right? Johnny asks, before giving Geordie £50—the money missing from the bank robbery. Geordie throws it back at him.

Will finds a letter from Leonard waiting for him, with a photo of Leonard and Daniel included and a sermon that Leonard asks Will to deliver. I was lost and now am found, it says.