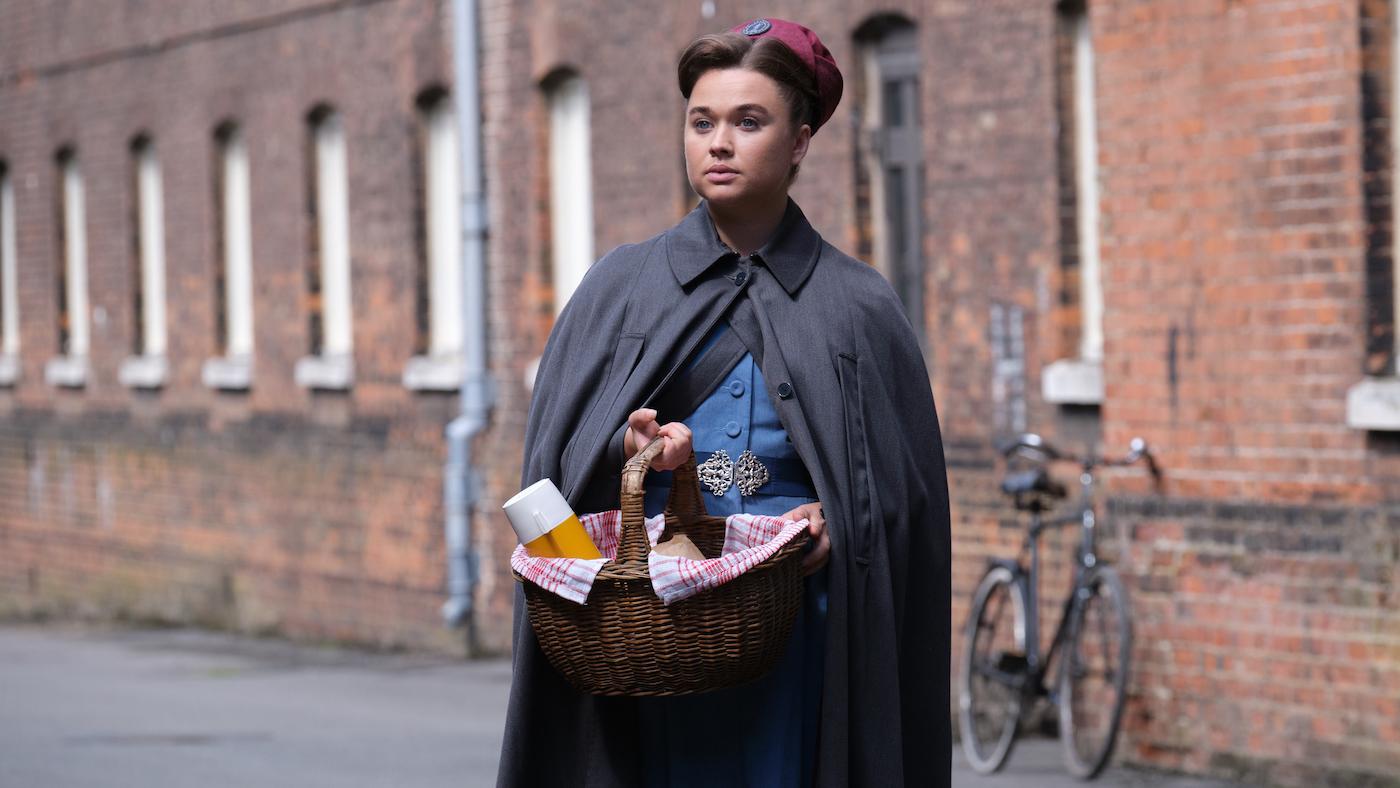 Nancy befriends a homeless man and struggles with how to help him. Photo: Neal Street Production

The centenary of the order of St. Raymond Nonnatus is approaching, and Sister Julienne has once again overstretched herself and become ill. She is struck by such dizziness that Fred must help her home; Dr. Turner diagnoses an ear infection, and orders her to rest until she is better. Sister Hilda is eager to take over the planning of the centenary celebrations, but Sister Julienne wants Shelagh to organize it, to Hilda’s disappointment.

Violet also has an exciting event approaching: she and other councilors have been invited to speak to the national government about the needs of the East End. She holds an open meeting for residents to air concerns—one brash woman has already visited her dress shop to complain about her public housing tower and insult Violet’s stitch-work. Trixie and Matthew argue for more funds for the midwives and healthcare, while Miss Higgins says that many of the problems in Poplar can be traced to issues of housing.

Homeless men have lately been drinking and urinating behind the maternity clinic. They drink methylated spirits—alcohol not fit for human consumption—because they are addicted but cannot afford consumable alcohol. Nancy encounters one homeless man while playing catch with Colette, who delights Nancy by calling her “mummy.”

Nancy is in the Buckle general store when the same man comes limping in to try to buy alcohol. Fred chides Violet and her for commenting on the man’s smell and laughing at him, and follows him to gift him some soda and cigarettes. Nancy decides to try to help him too, and brings him a walking stick that evening. He shares his name, Bernard, as well as stories of his mother—Nancy’s Irish accent reminds him of her. But he won’t accept treatment for his foot, which he can’t feel.

Nancy is beginning to understand the value of places like tuberculosis hostels. Sister Frances explains that, for people like the dying Mr. Huntley, the hostel becomes a sort of home—better for him to breathe his last there than in the hospital. Nancy brings food to the hostel for Sister Frances and Monica Joan as they sit with Huntley in his final hours.

Julie Haig is enjoying the early moments of a budding career. She’s been singing in clubs around London, and now her manager Mo has secured her a contract and an audition for a TV show. Her pregnancy is beginning to show, however, and is causing attacks of dizziness—but only she and her single mother, Thelma, know about the pregnancy.

Thelma finally insists that Julie visit the clinic, where she is diagnosed with an infection. The medical staff and Thelma argue that Julie must put her career on hold until she has the baby, no matter the audition. Mo wants to proceed with Julie’s career, but he also fears he won’t be able to market an unwed mother. He’s also trying to come up with practical solutions, but Julie cries when he raises the idea of a nursery to take care of her child while she tours and performs, and Nurse Crane chastises him.

Thelma calls the baby’s father, Jeff, who is serving in the military in West Germany. He immediately returns to Poplar, going AWOL from the army to do so. He’s also the son of a single mother and knows the stigma associated with such a status. He proposes to Julie, and she agrees to marry him.

She goes into labor during the wedding and ends up at the clinic in her wedding dress, with Jeff, her mother, and Mo all attending. She’s scared and overwhelmed, especially since the baby is coming early, but Lucille and Nurse Crane deliver a daughter. The infant has a high temperature and must be isolated, and in her absence Julie decides that she wants to give up her career in order to live with and raise her daughter. Good thing, too, as Jeff is arrested by the military police and taken away for going AWOL.

Violet is nervous for her meeting with a government minister. She ends up disappointed: the outcome is a plan to address the complaints about the homeless men with an increased police presence. She doesn’t like the plan, but feels she must address the concerns of her constituents. Fred contends that Bernard and the others like him are her constituents just as much as those complaining about them.

Bernard finally decides he wants some help, and goes to the clinic looking for Nancy but leaves when she’s not there. That evening, she and Dr. Turner, accompanied by Fred for safety, go to where many of the homeless men live and drink.

When they find Bernard, Nancy tries to take his shoe off to examine his foot—and his entire foot breaks off, to her horror. He doesn’t even seem to notice. He has terrible gangrene, and is sent to the hospital, where they amputate more of his leg.

Violet visits Bernard in the hospital with some treats and goods. He is dying of pneumonia. Nancy sits with him and learns about his hard life: his mother drowned herself when he was a child; he was robbed of the little money he had; he joined the Navy and was in the war. He always struggled, and decided it would be best to come home to Poplar where he could remember his mother.

Nancy asks Sister Frances how she does this job, where they see people in their darkest moments. Sister Frances advises her to concentrate on providing what her patient needs, which is usually as simple a thing as love.

Nancy dresses in yellow and brings Bernard buttercups—his mother loved yellow—and sits with him as he dies. She lets the hospital use her surname for his grave, since no one knew his. Violet suggests setting up treatment centers for alcoholics, modeled on the tuberculosis hostels, and promises to fight for funding.

The centenary celebrations take place in the rain, but happiness prevails—especially between Trixie and Matthew, who asks if he can send her flowers, and then kisses her.