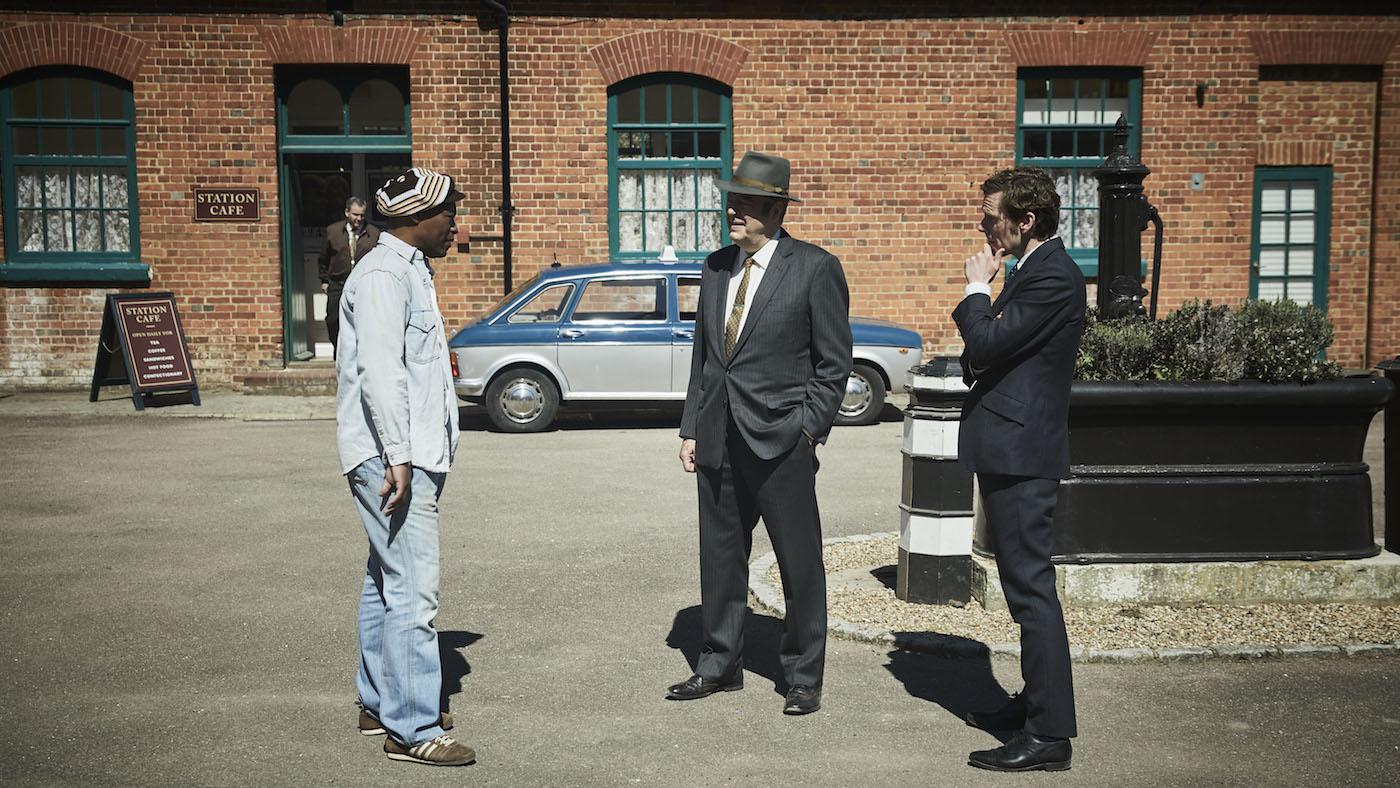 The murder during an apparent robbery of a cab driver has all the drivers on edge. Photo: Mammoth Screen and Masterpiece

Endeavour is available to stream. Recap the previous and following episodes.

Morse’s stepmother Gwen has arrived unexpectedly to stay with him. She sold her house and needs somewhere to live until she can take possession of her new home; Morse can sleep on his couch for a week.

It’s eerie timing, given that a cab driver named Dudley Lunn has just been shot and killed in his car, and Morse’s father was also a cab driver. Like Lunn, Morse’s father enjoyed gambling; they also both left their first wife and child after getting another woman pregnant. Morse has never forgiven his father or Gwen, and, needless to say, she doesn’t get along all that well with him either.

Lunn’s murder seems to have been a robbery: his wallet was emptied. Another driver was recently pistol-whipped and then robbed, so the other cab drivers are on edge. Lunn’s death was unusual, however, in that he was shot around 10 at night, but his watch was broken and stopped at 6:50. He was far out of town—the only thing nearby is the nudist retreat of Paradise Court.

A young couple, the Applebys, did just arrive at Paradise Court by taxi, but Lunn wasn’t their driver. They do believe they heard a gunshot the previous night, but had assumed it was a car backfiring.

Lunn was killed by a small caliber gun, one that would fit in a purse. He had a smear of lipstick on his collar, but was a noted womanizer. His wallet had a card for the Ostrich Fancy Club in it, but Morse can’t find any evidence of such a club existing.

Examining the scene of the crime, Morse finds part of a metal canister, but is interrupted in his inspection by Lunn’s young son, who points a gun at him. The son is waiting there to avenge his father, in case the killer comes back, but Morse confiscates the gun and brings him home. The son blames himself for his parents’ divorce—he got bad grades. Morse understands the feeling but assures him it’s not his fault.

Before Morse’s stepmother finally leaves his house without a trace except a note with her new address, she and he argue continually. You can’t blame me for your mother’s cancer your whole life, Gwen says at one point. We took you in!

Morse is not in the best state emotionally right now, as evidenced by a drunken visit to Joan Thursday’s apartment late at night. She’s not there: she and Strange are attending a charity ball at his Masonic Lodge together. The not-quite-a-date goes well: Strange and Joan dance, and she kisses him on the cheek as a thank you for a lovely evening. They also have another outing planned, having won tickets at the ball to a concert in London.

Morse’s night doesn’t end so well. He is clipped by a taxi as he drunkenly stumbles through the streets, but luckily the driver, Clarry Haynes, kindly helps Morse and drops him off at home.

Morse returns the favor by pocketing a business card from the back of Haynes’ cab: an IOU from Lunn. The next day, Haynes insists that Lunn had paid him back. He also admits that he was the driver who took the Applebys to Paradise Court; he didn’t say so earlier because his wife has been sick and he didn’t want to get wrapped up in police business.

The Applebys have their own secrets. Baz, the husband, disappears overnight, telling his wife that he revisited an old pub from his time as an undergrad and passed out on the lawn after a night of drinking.

The night held a worse fate for Father Mahoney: he is found murdered in a confessional in his church. Like Lunn, he was shot by a small caliber gun and had his wallet emptied. Once again, a timepiece is smashed at a different time than the death. A cigarette case engraved with the same insignia as Lunn’s Ostrich Fancy Club card is found on the priest. A key on his pocket watch opens a wardrobe that contains a bag with the apron of a Mason and some film canisters. The part of a canister Morse found by Lunn’s murder scene matches these containers.

Father Mahoney’s half brother occasionally turned up and asked for money. A window washer recalls hearing an argument and noticing a trilby with orange feathers on the priest’s desk.

The Master’s wife was away on a trip, but an anonymous tipster called in the murder. Morse recognizes indentations in the lawn and realizes the tip came from the window washer who was at the church around the time of the priest’s death.

Morse is then diverted from the investigation to take a statement from a woman who ended up in the hospital after a beating from her husband. She doesn’t want to press charges, and admits that her husband, the groundskeeper at Paradise Court, found out that she was having an affair with Dudley Lunn. When Morse arrives at the retreat to speak to the groundskeeper, however, he has hung himself. His stash of photos of nude guests is burning in a fire, but photos of him with a younger Baz Appleby are safe.

Baz admits to a youthful fling with the groundskeeper years ago. When he arrived at Paradise Court, he met with the groundskeeper to tell him the affair was in the past—but they were near where Dudley was shot and so had to interrupt their conversation when they heard the gun. They took it up again the following evening—hence Baz’s absence—when Baz left the unhappy groundskeeper with no illusions about their relationship. Thus the suicide.

Meanwhile, Thursday investigates the London sex shop linked to the Ostrich Fancy Club, and is interrupted by another policeman who’s responsible for patrolling the area. Recognizing his trilby with an orange feather, Thursday realizes the cop has been posing as Father Mahoney’s half brother and blackmailing him, having discovered his side business producing pornography.

While briefing Superintendent Bright on the investigation, Morse notices a book of Bright’s paintings—the superintendent has been taking a live-model class—and recognizes the model in them as the window washer’s girlfriend. She’s also Dudley Lunn’s opposite performer in the pornographic films.

Morse realizes that the times on the broken clocks at the murder scenes are a semaphore system, signaling “CYW.” It means “chick,” a term of endearment, in Welsh, and Morse recalls that the taxi dispatcher, Ifan Roberts, is Welsh and had an old photo of a young daughter in his office whom everyone called “Birdie.” Roberts is the model’s father, although she was raised by her mother.

Roberts ordered a film from the Ostrich Fancy Club and was horrified to recognize his daughter in it. Vowing revenge, he sent Lunn, whom he also recognized, on a fake job to the wilderness by Paradise Court, where he killed him. But not before he insisted that Lunn tell him who else was involved in the films—that’s how he was led to the other two victims.

The sordid case makes Morse even more cynical about the world, despite Thursday’s argument for a more hopeful outlook.