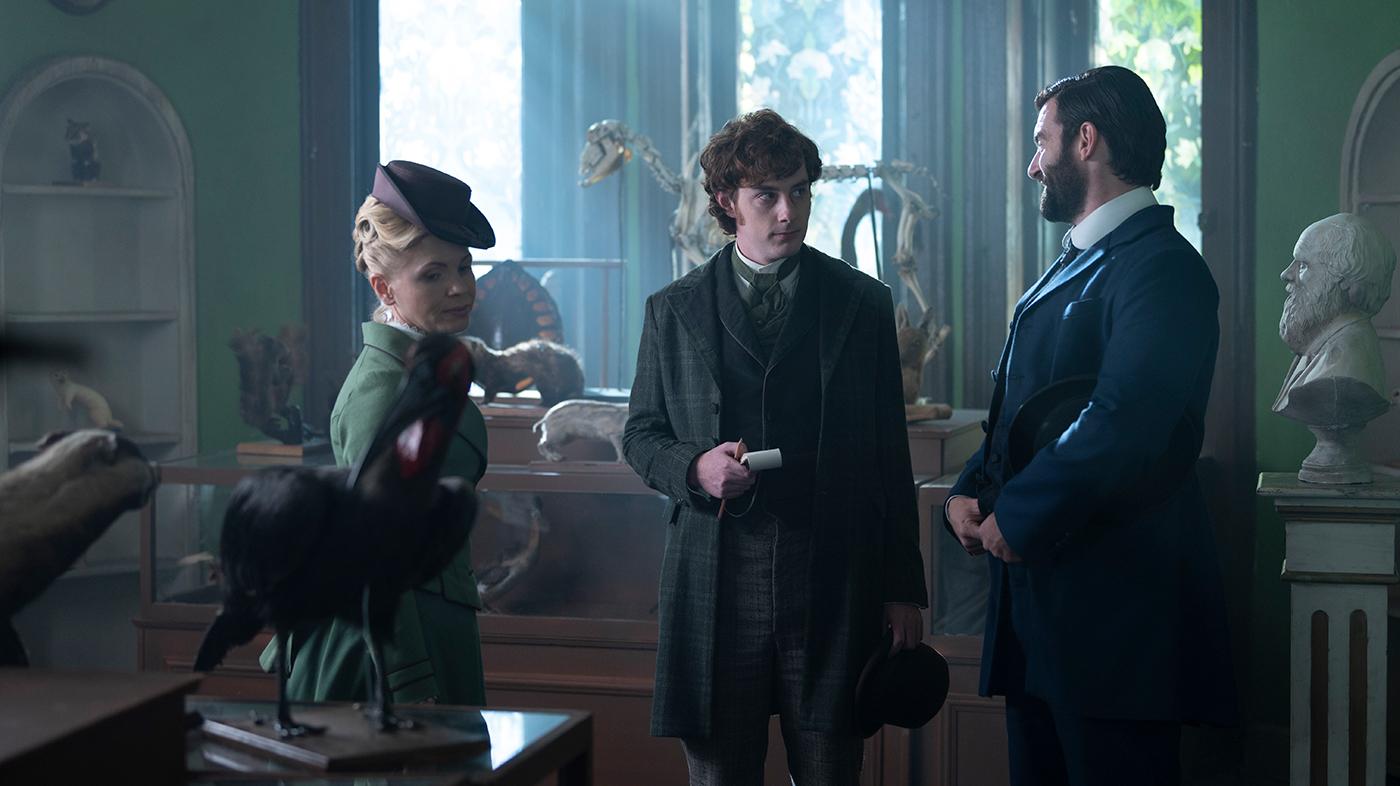 Eliza and William investigate the theft of a sketch by Charles Darwin. Photo: Element 8 Entertainment and MASTERPIECE

There’s nothing worse than making an enemy of a gentlelady of high society—and Eliza manages to offend several of them. She has pitched a lecture on her work to Rupert’s mother and her ladies’ cultural society at Hattie’s behest, but Mrs. Parker is skeptical: Eliza’s clientele is lowborn and could tarnish the society’s reputation. But the society’s ladies have their own unsavory secrets, as Eliza reveals in detail, to Mrs. Parker’s horror.

Mrs. Parker will seek revenge for the embarrassment Eliza dealt her, Hattie warns.

Mrs. Parker isn’t quite correct about Eliza’s clientele: an agent from the insurance firm of Swab & Durstin asks her to look into the theft of a sketch by Charles Darwin from a natural history museum. Darwin has just died, so the sketch has soared in value. Nothing else was taken from the museum, which its proprietor, Hannah Garret, says means the thief knew nothing else was worth much. Nothing was broken to gain access to the exhibits.

Hannah believes the insurance firm sent a female detective to gain her trust, thinking she stole the sketch herself because the museum is a struggling business. William makes the same assumption.

But Hannah apologizes to Eliza for that guess, recognizing her intelligence. She explains that she received the sketch from Darwin after attending a lecture and asking a difficult question. Her husband, the naturalist Thomas Dashwood, resented her growing knowledge, and so they are separated—divorce is too expensive both financially and socially for a woman of the era.

Thomas is a cruel man, as Eliza sees when she visits him at home. He’s short with the servants and won’t talk to Eliza—he already spoken to the police. His mother is another story. She apologizes to Eliza for her son, and asks Eliza for help solving a word puzzle. She is ailing, however, with a bad cough.

Eliza returns to her office to find a line of people waiting to speak to her: they all purport to have found the sketch. They’re answering a newspaper ad offering a reward of twice what the sketch is actually worth—but Eliza didn’t place the ad. The journalist Basil Sinclaire explains that it was purchased anonymously—before the robbery. As Eliza and William speak to Basil at the police station, William’s bumbling subordinate Fitzroy comes in and tells William that he has found an art dealer who might be a person of interest in the case.

William chastises Fitzroy for revealing a lead in front of non-policemen. He’s trying to reform the young man, who is the son of the police commissioner—and he needs a lot of reforming. In addition to being inept, Fitzroy is addicted to opium, which he took up because it brought relief from the disappointment of his father. But Fitzroy is finding William to be the most decent boss he has ever had, especially because William promises not to tell the superintendent about Fitzroy’s addiction, even after he collapses on the job and has to recover in the infirmary. Fitzroy asks William to put him on administrative duty so that he can learn the basics of detective work, and William agrees.

Eliza goes to speak to Hannah Garret again and overhears an argument: Thomas accuses her of stealing the sketch herself. Eliza follows Hannah rather than reveal herself, and watches her meet with a man at a bar. He points a gun at Eliza when she tries to follow him, but she is saved by William, who was led there by the art dealer whom Fitzroy mentioned.

The man is a black market dealer who admits under pressure that Hannah was trying to buy the sketch from him with other exhibits from her museum, since she doesn’t have much money. But the man doesn’t have the sketch. He suggests looking into Thomas, who has a reputation for paying well, with no questions asked.

Another lead opens up when William finds an insurance agent waiting for him. The agent has never heard of Swab & Durstin and says his firm is actually responsible for insuring the sketch.

Eliza checks out the address on the card given her by the supposed Swab, and finds a vacant building. Hattie, a lover of fonts and printing, helps her track down the firm that printed the cards. The stationer explains that they were recently purchased by a solicitor named Reginald Booth. Eliza breaks in to Booth’s office and finds a file for the Dashwood family.

Meanwhile, “Swab,” aka Booth, visits William and orders him to leave Thomas alone in the investigation. Thomas’s mother has just died, and he is wealthy enough to fund a legal challenge. William recognizes the solicitor from Eliza’s description of “Swab”—Welsh, with a birthmark—and learns from him that Thomas’s mother sent him to visit Eliza as Swab.

Eliza is doing her own detective work, breaking in to the Dashwood home. She discovers a hidden door in Mrs. Dashwood’s room. Behind it is a collection of treasures, as well as a newspaper story lauding Eliza’s work. Mrs. Dashwood was an explorer left out of history: her husband forced her to stay at home, then later her son did the same thing.

Eliza and William together realize that Mrs. Dashwood is the one who placed the newspaper ad. Knowing Mrs. Dashwood’s love of puzzles, Eliza realizes she has set one for her.

Mrs. Dashwood was fond of her daughter-in-law, Hannah, and often visited her museum—she even had the chance to take a set of keys. She wanted to help Hannah with a story that would generate newspaper publicity, and use a female detective to solve it, to show women trying to make it in a man’s world. The name “Swab & Durstin” is an anagram, for “Darwin’s bust.”

Eliza smashes a bust of the naturalist in Hannah’s museum. Inside is the sketch. Basil Sinclaire is there to observe—and report on—it all.

Eliza is annoyed that she was only hired because she was a woman, but William encourages her to reframe the issue. She can’t change the fact that she is a woman; instead she should use it to her advantage.

She already has another new client. Mrs. Parker has visited her to reveal that she looked into Eliza’s claims about the women of her society, and found them to be true. Impressed, Mrs. Parker wants to hire Eliza. She needs a detective to gather information on potential husbands for Hattie. And she’ll pay full price.