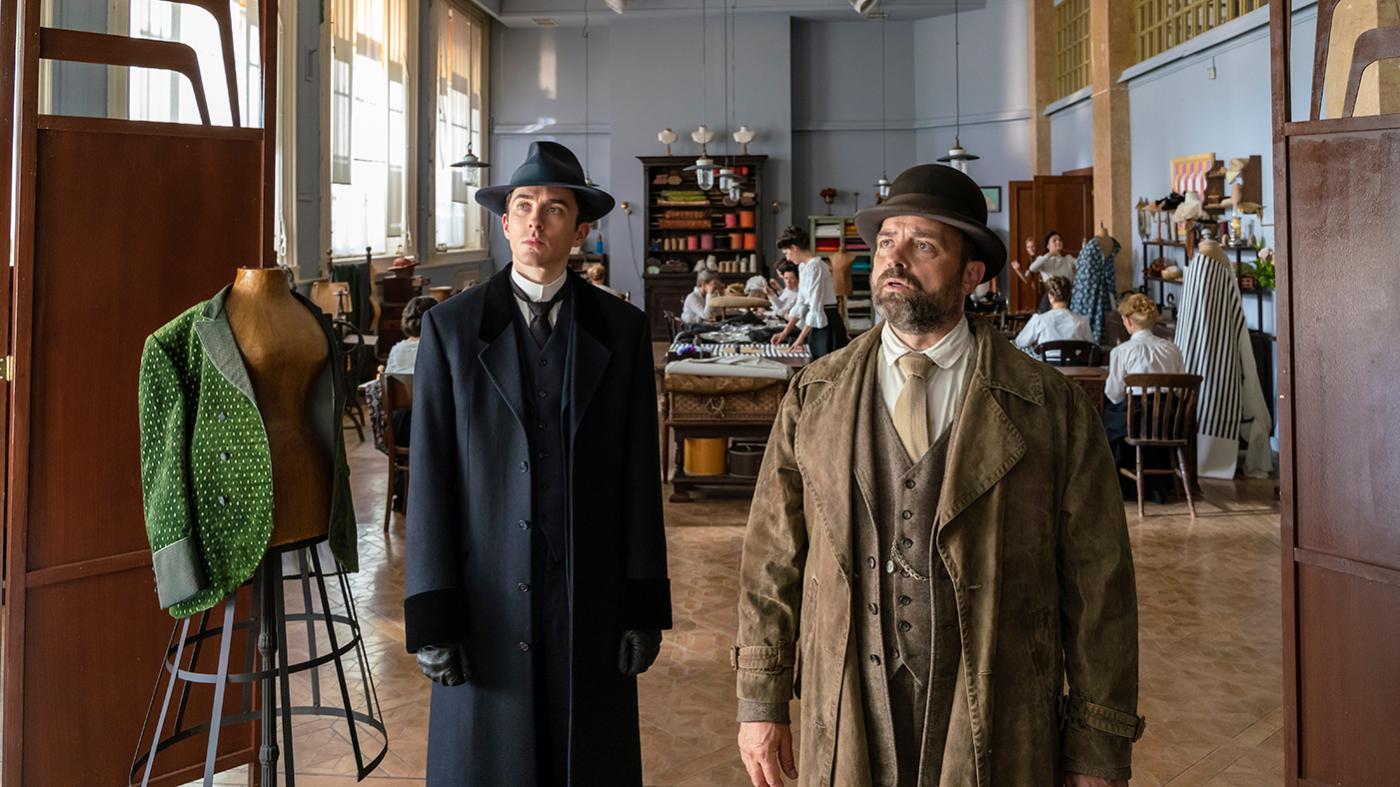 Vienna Blood airs Sundays at 9:00 pm and is available to stream. Recap the previous and following episodes.
Keep up with your favorite dramas and mysteries by signing up for our newsletter, Dramalogue.

Max continues to move up in the world, even as he has wrecked his romantic life. He has published a book (The Psychopathy of the Criminal Mind) and has taken stylish new lodgings where an assistant aids him with his psychiatric clients. Amelia has left him, and Clara and he have mutually agreed not to ever meet each other in the wake of Clara calling off her engagement, as he explains to Oskar after he and Oskar run into Clara at a fashion house. Their relationship never goes well. Clara refuses to reveal her business at the fashion house to Max.

Max and Oskar are there because a woman has been murdered. Adele was a seamstress for Kristina Vogl, a modern fashion designer who wants to “free Vienna’s women” by making them loose-fitting gowns instead of corsets and restrictive dresses. Valentin, Kristina’s assistant, let Adele stay late to keep working and lock up, but instead Adele donned one of Kristina’s gowns after everyone else left and met someone before being killed.

Adele seems to have willingly slept with the man she met, and there are no signs of struggle or obvious wounds. The cause of death is eventually determined as a tiny pinprick in the back of the neck, straight through to the brain. The killer must be familiar with anatomy.

Max believes the killer has a sexual psychosis and murdered Adele during intercourse, at the moment of climax—what the French call “la petite mort,” the little death. More fodder for this theory comes when he receives a letter, forwarded from the hospital, confessing that the writer killed a woman. There is beauty even in death, as with a rose cut from its stem at the height of its blooming, the letter says.

Oskar notices that the letter was postmarked a week earlier. There must be another victim besides Adele.

Oskar and Max ask the police archivist Fraulein Lindner to search her records for another woman recently found dead under unexplained circumstances. She turns up a worker at the flower market named Mathilde.

Mathilde was found by her landlord when he broke into her rooms in search of her after she failed to pay rent. The detective in charge of investigating her death closed the case without even ordering a postmortem, given that she was poor and lived in a slum; these things happen all the time, he tells Oskar and Max. Although she’s been dead a week, the pauper’s grave into which she was thrown is still open, and they retrieve her corpse. An examination reveals that she, too, was killed by a needle to the brain. Both she and Adele were poor, alone, and drawn to beauty.

Mathilde’s apartment is full of roses when the landlord lets Max and Oskar in. A neighbor says Mathilde was lonely and often brought men home, but never the same one twice. The neighbor also tells Oskar that, if he’s looking for a criminal, the landlord’s treatment of his tenants qualifies him. Oskar tells the man to clean up the building, and threatens him when he says the immigrant denizens of the slum don’t deserve any better.

Oskar finds the murderer of Adele and Mathilde behind comprehension, while Max is fascinated. He believes the killer witnessed death in his youth and found that it made the person only more beautiful; something has now brought that moment back. Max thinks the murderer sent him a letter because he wants to explain his psychosis, and so Max wants to engage with him in an attempt to prevent more women from being killed. Max gives an interview to the paper in which he says the killer is unique, hoping to draw him into more correspondence. The police chief Von Bülow, wearing a new suit, makes sure he is photographed with Max for the story.

Given that his father works in the fabric business, Max visits him to ask about the fabric of the gown Adele was wearing when she was killed. Neither Mendel nor Max’s sister Leah, who has joined her father in the business, has any useful answers, but Mendel does mention that there are rumors about Kristina Vogl, the designer—that she’s not quite normal.

When Leah asks Clara about these rumors, Clara demurs. The two women are celebrating a new career for Clara: she has become a journalist, and her first story, featuring an interview with Vogl, will be published soon.

Vogl does have a drug problem, although it is hidden. Her husband is a doctor, and prescribed her medicine that he now wishes she wouldn’t take, but she pays Valentin to procure her some. It can cause hallucinations, which is why she initially didn’t tell the police that she believes she saw a man leaving the fashion house the night Adele was killed. (Kristina lives above the workroom. She, her husband, their maid Selma—who complains of the “backbreaking” work Kristina gives her—and Valentin were all in their living quarters in the building when Adele was killed.)

Kristina’s husband tries to discourage her from going to Oskar, lest she damage her reputation, but she decides to anyway, telling him that the man she saw was masked, although she didn’t see any straps or strings. It was as if the mask was fused to his skin.

Valentin and Kristina’s husband didn’t see anything that night. Ludo, who photographs Kristina’s dresses on models, is the only other man who works at the fashion house, and he wasn’t there that night. Ludo is contemptuous of Kristina and Valentin, whom he suspects wants to wear Kristina’s gowns, as well as the female seamstresses—in a different way. Admiring one seamstress who tells him she wants to be a model, he offers to photograph her—and then makes her strip as he does.

What other poor, lonely woman in search of beauty will be targeted next? 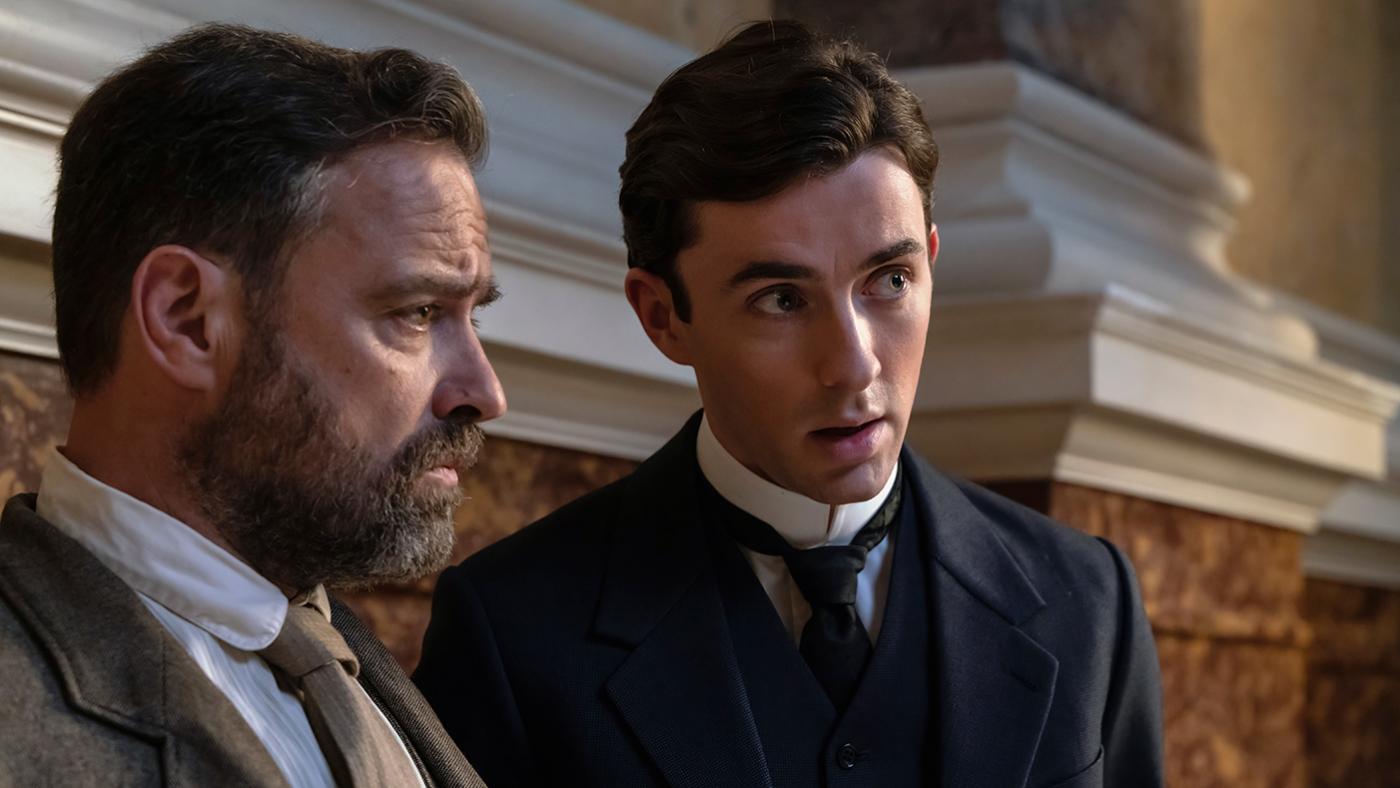 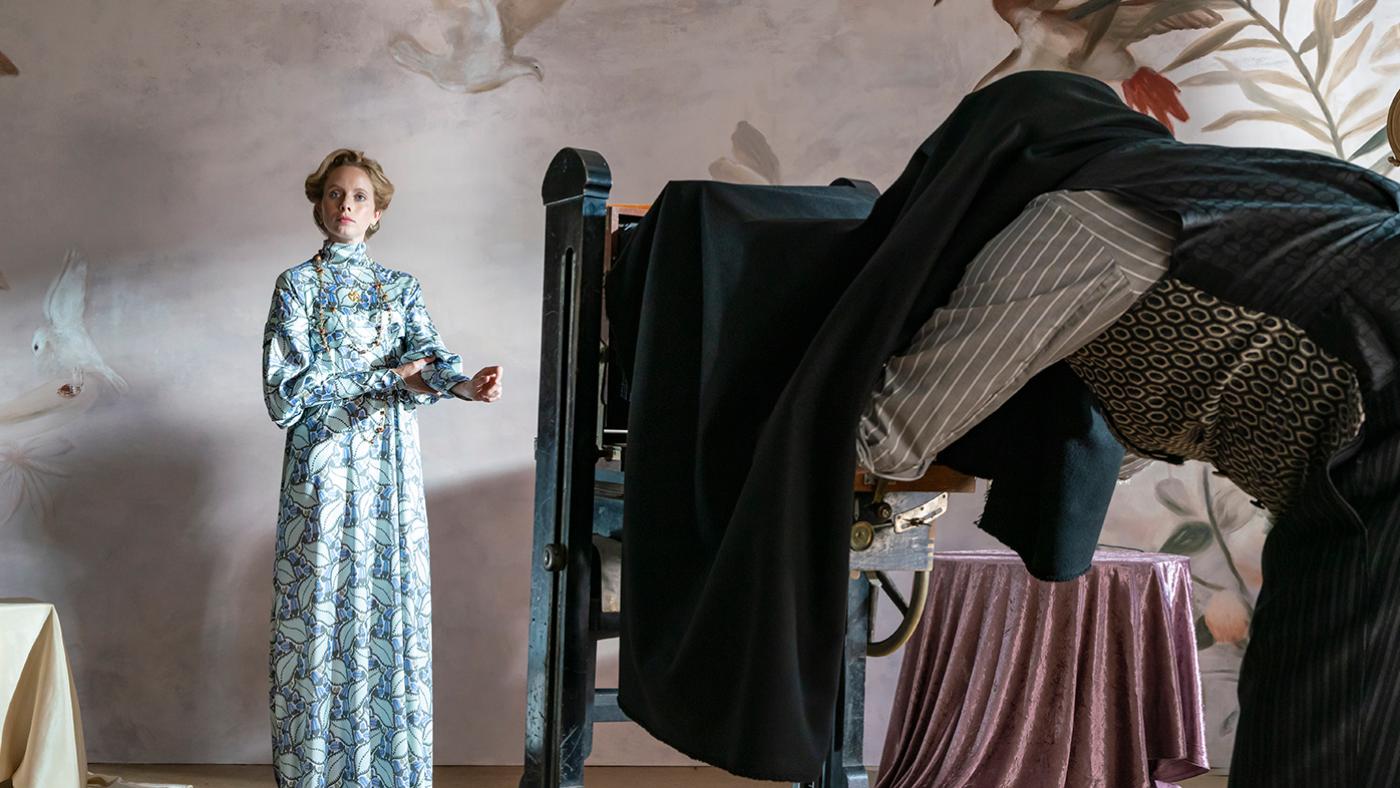 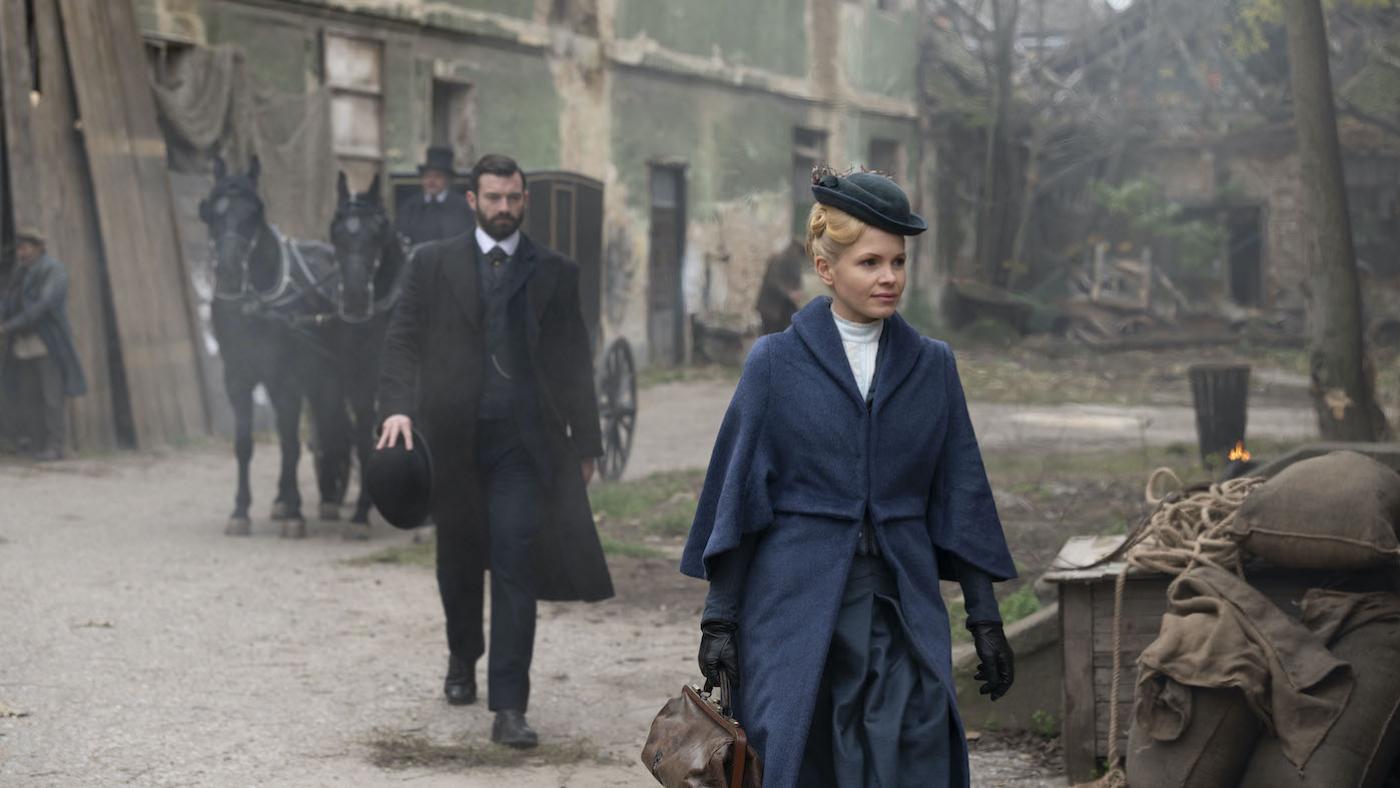 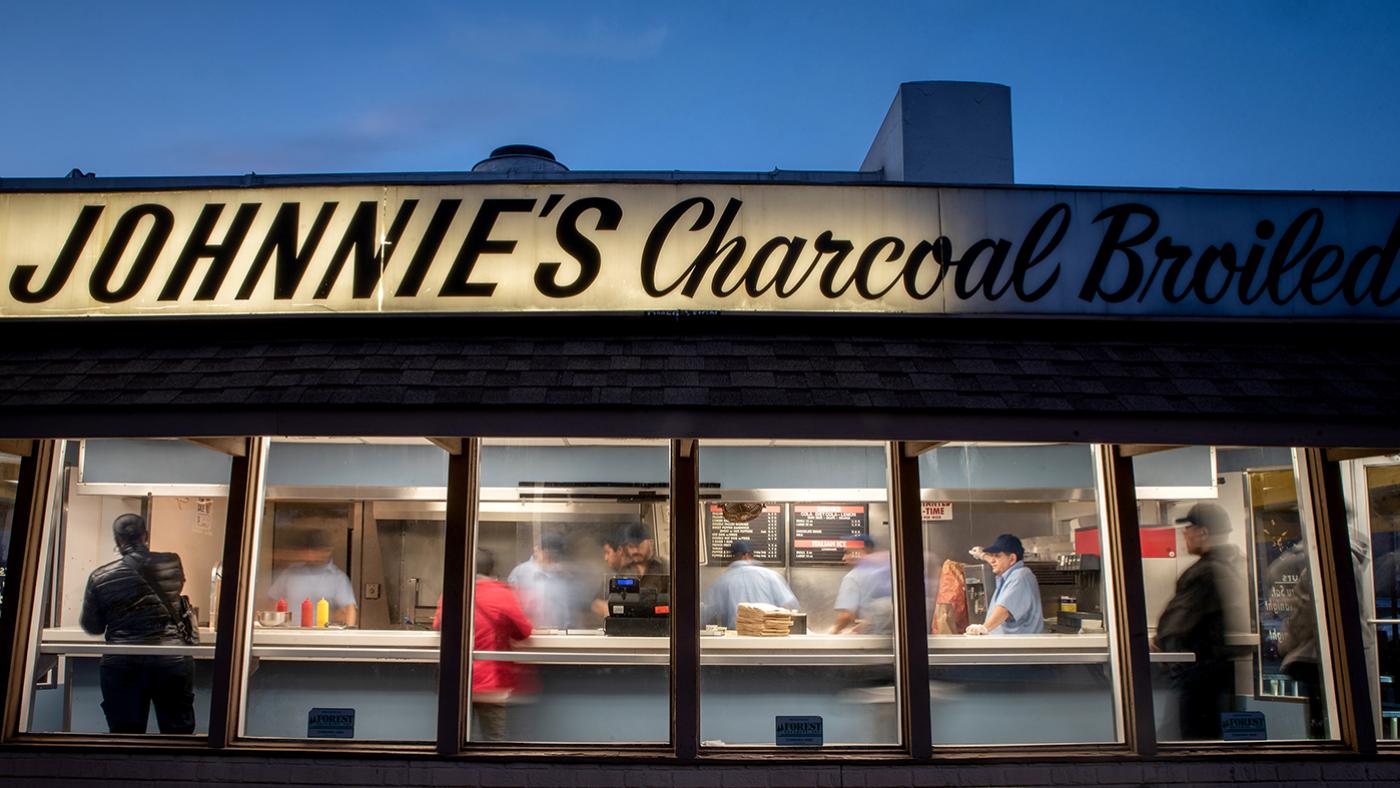