From Riots to Renaissance: Black Aviation

DuSable to Obama | From Riots to Renaissance | Black Aviation 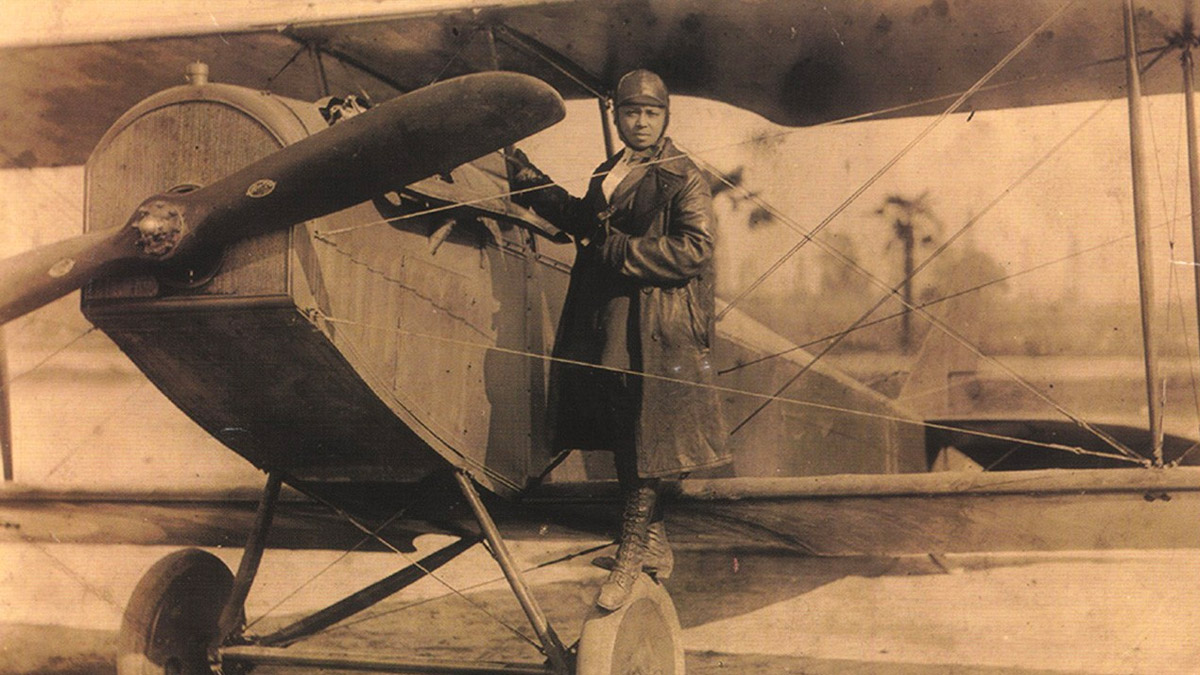 Next: Century of Progress >

From Riots to Renaissance: Black Aviation

Black Chicago is synonymous with jazz and the blues, but few know about the city's courageous black pilots who changed aviation history. When flying was still a novelty, these men and women took to the skies and in the process helped open the door for blacks to train and fly as pilots in World War II.

Chicago's significant role in the black aviation movement began with two eager, young men who shared a passion for flying. In the 1920s, Cornelius Coffey and John C. Robinson met in Detroit, Michigan, where they were working as auto mechanics. Both men wanted to learn to fly and both were inspired by pioneering, Chicago aviatrix Bessie Coleman who overcame racial and sexual barriers to become a licensed pilot. They applied to the Curtiss-Wright School of Aeronautics in Chicago and were accepted. However, upon learning that the two mechanics were black, the school revoked their admission.

Undaunted, Robinson convinced the school to hire him as a maintenance worker. While on the job, he listened in on classes, and at home he read books and papers he collected from the school's trash cans. Then, together with the help of Coffey and other aviation enthusiasts, they built a small airplane from a purchased airplane kit and a used motorcycle motor. The friends persuaded one of the school's instructors to inspect the plane and take a ride. Awed by its craftsmanship, the instructor informed his colleagues of Robinson and Coffey's remarkable achievement and encouraged their admission to the school. In 1929, Robinson and Coffey became the first black students to be enrolled at Curtiss-Wright. Later, they broke a second barrier by becoming the first black instructors of a certified aviation school in the United States when Curtiss-Wright hired them to teach 35 black students in night classes.

At the time, black aviators were not allowed to fly out of airports used by whites. So Robinson and Coffey set out to establish an airfield for aspiring black aviators. Along with the black students from the school, they formed the Challenger Aero Club. The club members secured land in Robbins, Illinois for an airport, where they constructed an airstrip with their own hands. One of the club members, Janet Harmon-Bragg, a nurse and flight student, purchased an airplane so she and others could fly.

Robbins Airport served as a training facility for aspiring black pilots until it was destroyed by a violent windstorm in 1933. The Challenger Aero Club then moved its activities to Harlem Airport on Chicago's Southwest side. There, a young woman named Willa Brown joined the black aviators. Brown enlisted the help of the Chicago Defender to promote black aeronautics and spread the news of these adventurous pilots across the nation. In 1938, Brown and Coffey established Coffey School of Aeronautics at the airport. Hundreds of men trained under Coffey, many of whom later became members of the Tuskegee Airmen who flew in World War II.

Robinson, Coffey, and their colleagues not only contributed to the advancement of black aviators in Chicago, but they also inspired African Americans across the country to participate in aeronautics. Among their many national achievements is their successful push for the participation of black pilots in the U. S. Army Air Corps. 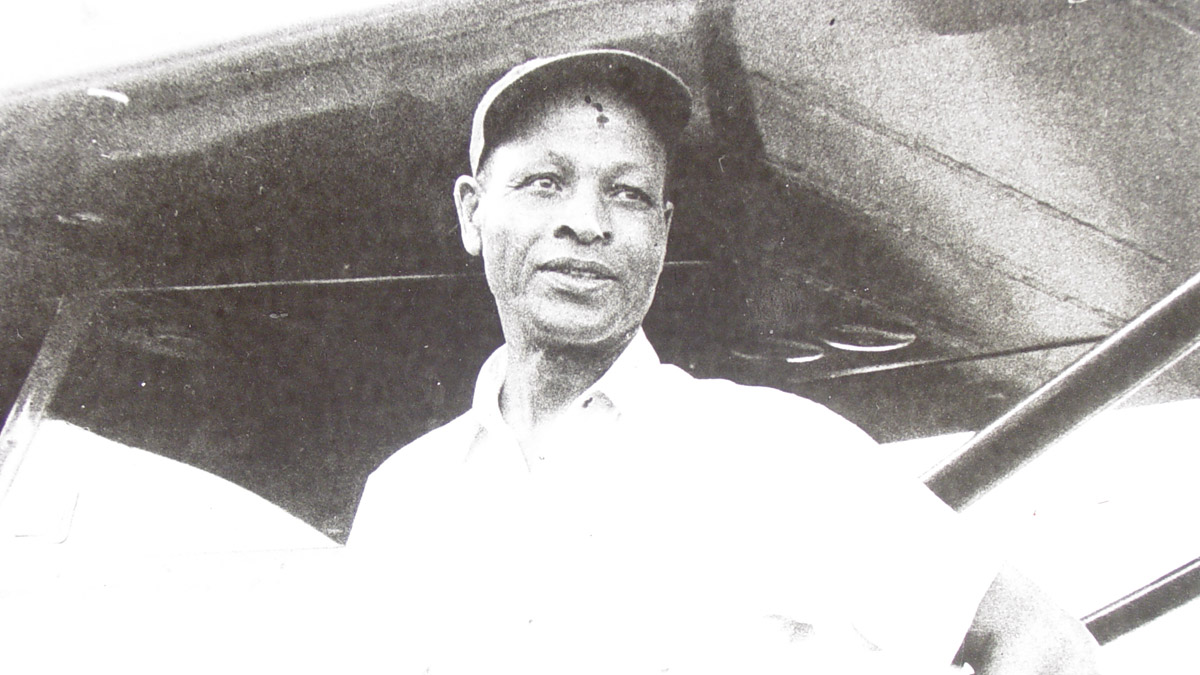 Cornelius Coffey (1903-1994) was a mild mannered Southerner who migrated to the Midwest in the 1920s. As a teenager, an exhilarating airplane ride with a barnstorming pilot sparked his interest in flying. Coffey later explained that he was initially drawn to aviation because he felt it was a field in which he would not be bound by racial prejudice. Although he was a certified pilot and flight instructor, he was best known for his exceptional skills as an airplane mechanic. Coffey has also been credited as the inventor of the carburetor heat control, which enables planes to fly in cold weather. 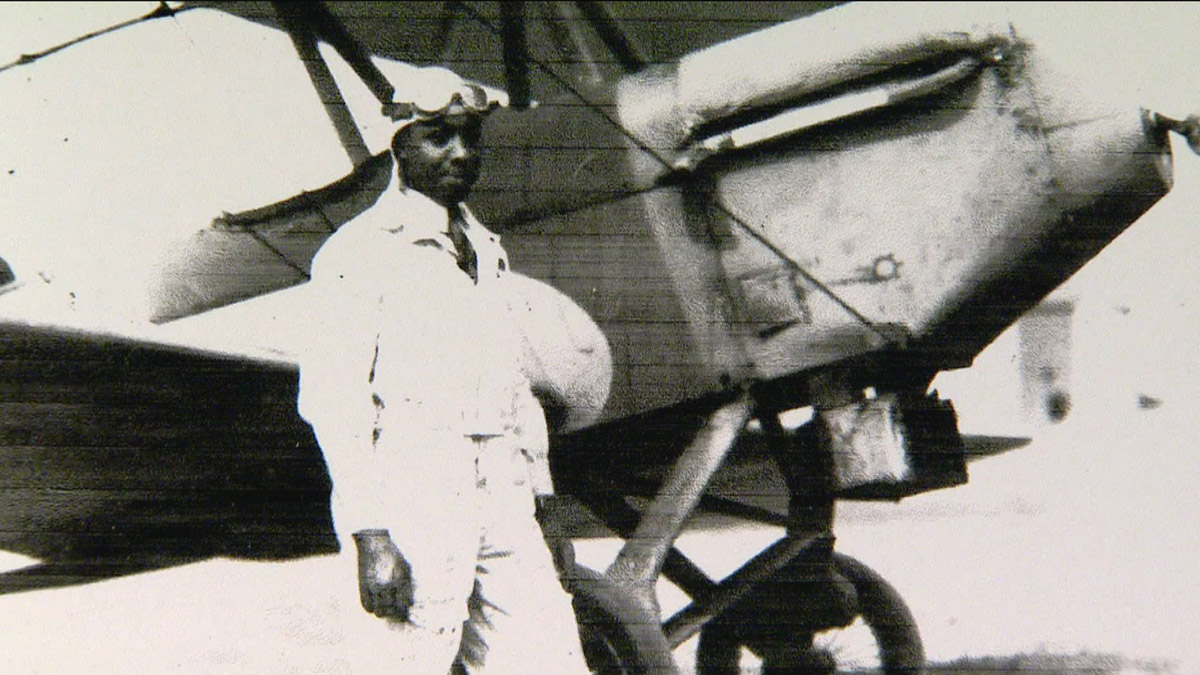 John "Johnny" Robinson's (1906-1954) dream of flying started at age seven, when he first saw an airplane in his hometown of Gulfport, Mississippi. But Robinson temporarily abandoned his dream after his parents convinced him to pursue a more practical profession. He graduated from the Tuskegee Institute with a degree in automotive mechanics. His interested in aviation was later revived after he moved to Detroit, where he met Cornelius Coffey and the two applied for an aeronautics program in Chicago. An adventurous and intelligent aviator, Robinson spent the later years of his career as a fighter pilot in the Ethiopian Air Force and became known as the "Brown Condor." Upon his return to the U.S., he received a hero's welcome for his role as the only American volunteer in the Ethiopia-Italy conflict. In 1954, Robinson died in a plane crash in Ethiopia. 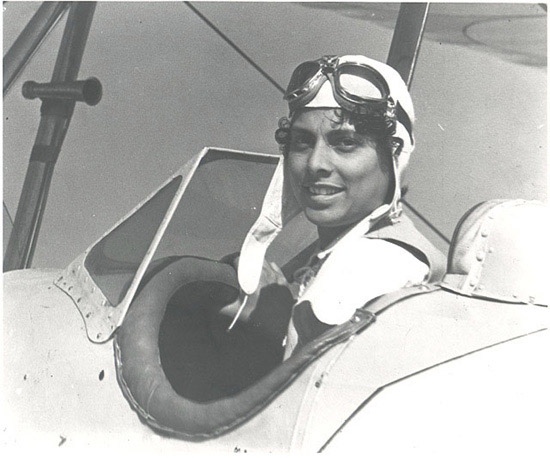 Willa Brown (1906-1992) worked as a teacher before moving to Chicago in 1932. She developed a love for flying after meeting Johnny Robinson and spending time with the black aviators at Harlem Airport. In 1939, Brown became the first black woman to attain a commercial pilot's license and was often likened to Bessie Coleman. An attractive and charismatic woman, Brown also became the face of Chicago's group of black aviators. A born publicist, she was instrumental in establishing a relationship with the Chicago Defender newspaper which increased visibility for black aviators' activities in the city and across the country. After the closing of the aeronautics school that she had established with Cornelius Coffey, Brown continued to be a leader in the fight to integrate blacks into the U.S. Army Corps. 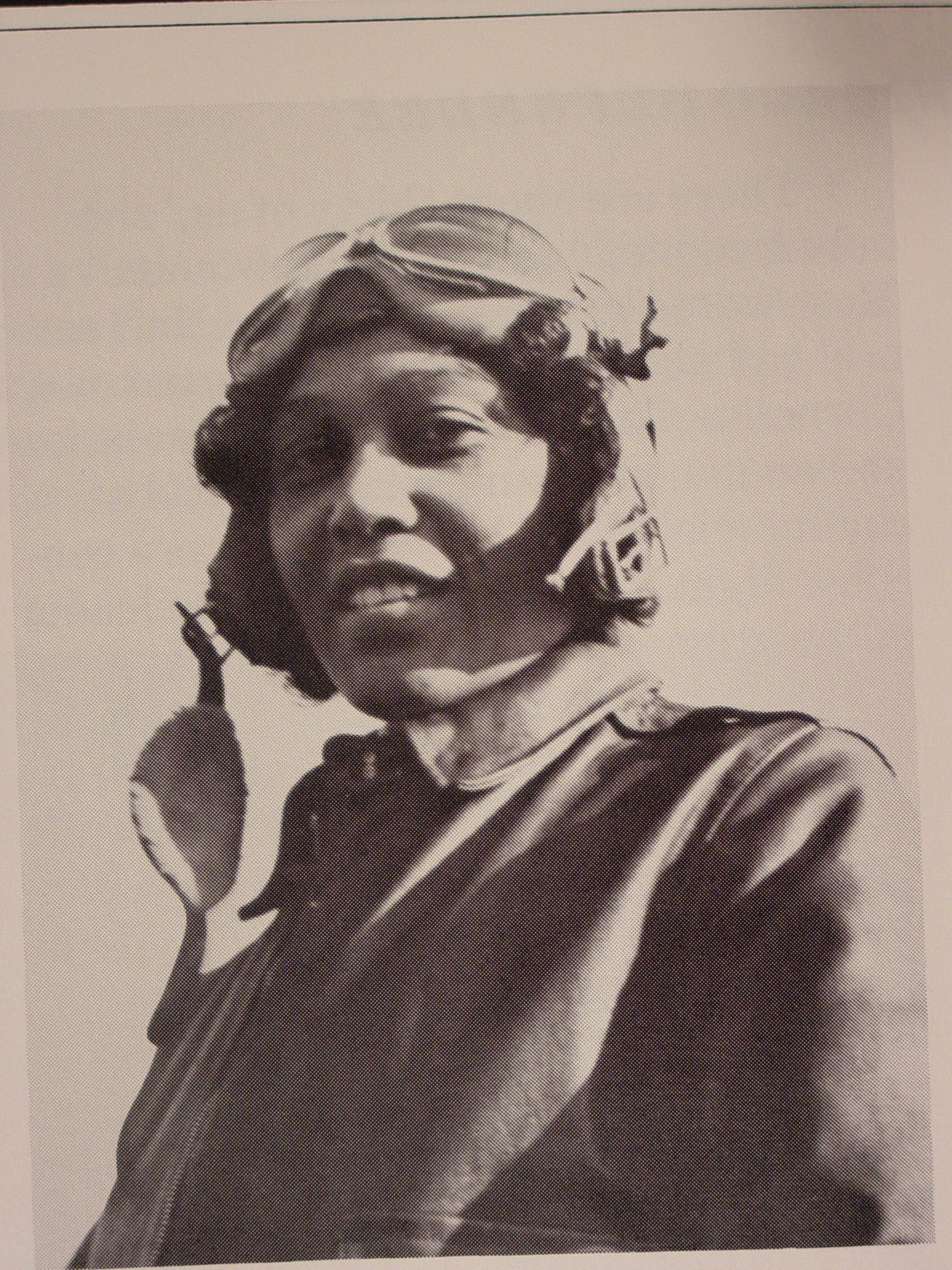 Janet Harmon-Bragg (1907-1993) was working as a health inspector in Chicago when she decided that she wanted to learn to fly. She later reported that she had been inspired by a billboard displaying a bird and its fledglings which read, "Birds Learn to Fly. Why Can't You?" That was her defining moment. In 1933, she enrolled in Aeronautical University ground school, where she studied under Johnny Robinson and Cornelius Coffey. She joined Coffey, Robinson, and other black students from the university in founding the Challenger Aero Club. Harmon-Bragg received her private pilot's license in the mid- 1930s and later attained her commercial license. Like Willa Brown, she was significant in promoting the work of black aviators. In the 1930s, she wrote "Negro Aviation," a weekly column in the Chicago Defender. Although she continued to fly as a hobby, Harmon-Bragg later returned to her career as a health inspector and then became the successful owner of nursing homes. 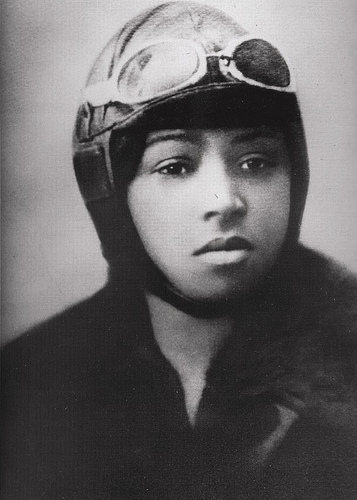 Bessie Coleman (1892–1926) was the first African American to become a licensed pilot. Limited by race and gender discrimination in America, she went to France to learn to fly. Born in Atlanta, Texas, Coleman headed to Chicago when she was 23 and landed a job as a manicurist. But Coleman dreamed of being a pilot — a seemingly impossible notion for a black woman of limited means. Even though no aviation school would admit her, Coleman was determined to succeed and turned to Robert S. Abbott, publisher of the Chicago Defender for advice. Abbott told her to save her money, learn to speak French, and go to France for her training. He would help to support her and publicize her efforts. Coleman dutifully followed Abbott's advice and left for France in 1920. In 1921, after seven months of training, Coleman was awarded an international pilot's license.

On her return to the United States, Coleman was hailed as a hero by the black press. In the 1920s airplanes, not to mention female pilots, were still novelties and Coleman became a celebrity barnstormer, thrilling audiences with daring aerobatic stunts. Coleman soon became a role model for blacks across the country and used her notoriety to encourage African Americans to get involved in aviation.

On April 30, 1926, during a rehearsal flight for an air show, Coleman's plane suffered a malfunction and plummeted towards earth. Coleman, who was not strapped in, was thrown from the plane and was killed in the accident. She was 33 years old.

Bessie Coleman was a leading figure in the development of black aviation, especially in Chicago. Her passion, determination, and success inspired a generation of young fliers and her contributions continue to be remembered. Every year since 1931, Tuskegee Airmen fly over Colman's grave and drop flowers. The city has named a street in her honor, Bessie Coleman Drive, leading to O'Hare Airport, and the U.S. Postal Service has issued a stamp bearing her likeness.